A stunning six-foot-four woman has revealed that she is inundated with DMs from men asking to ‘climb’ her – while insisting that shorter guys are better lovers.

Emerald Van Langen, a 32-year-old nutrition manager and model from Toronto, Canada, admitted that dating used to be difficult because of her height, but that hasn’t stopped her from finding love – or admirers online.

‘I’ve been with my husband for eleven years now and he’s five-foot-ten-inches tall. Before we met, I didn’t date much but I only dated shorter men – six-foot-two and under – when I did,’ she explained.

Legs for days: Emerald Van Langen, 32, is a six-foot-four nutrition manager and model from Toronto, Canada 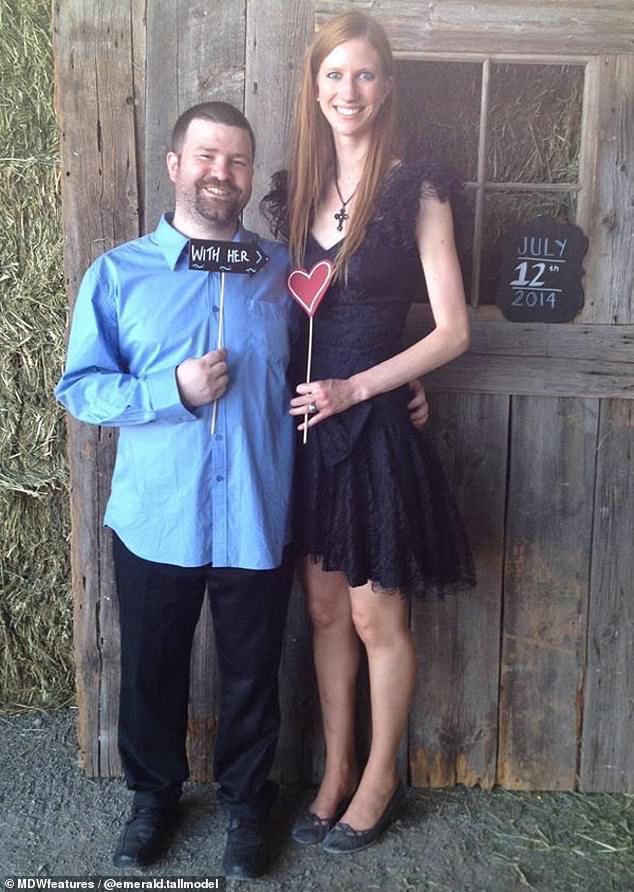 Look of love: Emerald’s five-foot-ten husband of 11 years is six inches shorter than she is

While some might assume a shorter man would be more likely to be intimidated by her height, she said the opposite was the case.

‘Taller men would always seem to be nervous about me being taller than them,’ she recalled.

Emerald proudly shows off her height in the photos she shares on her Instagram page, though she admitted that they sometimes attract unwanted attention.

‘I do receive some inappropriate DMs. Some just ask me to stand next to a door, but some want me to post kinky videos,’ she explained. ‘Someone once messaged me saying, “I’d climb you for a f**k.”‘ 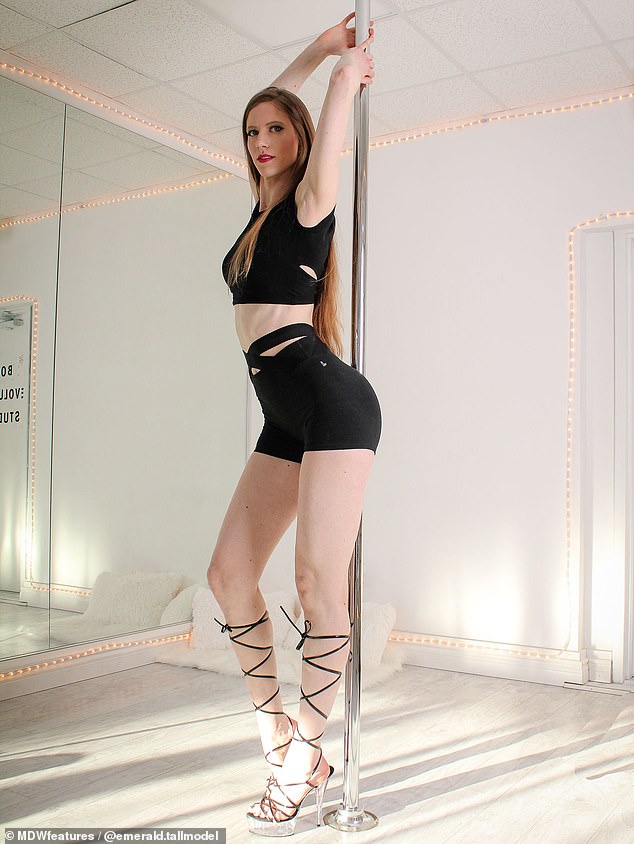 Unwanted attention; The model, who practices pole dancing, said men will reach out to her on Instagram and ask her to post ‘kinky videos,’ while offered to ‘climb’ her 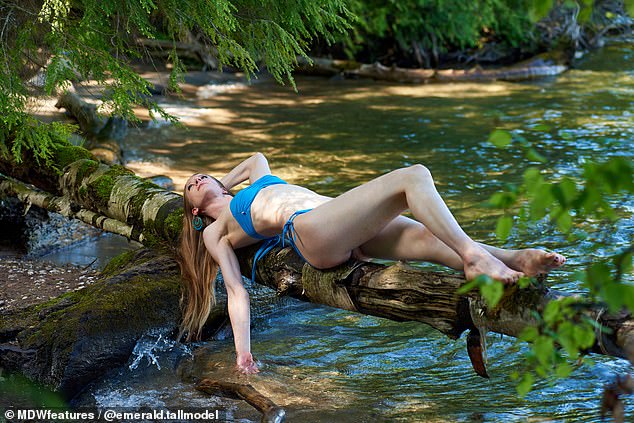 Opinion: Emerald has only ever dated shorter men and thinks they are better lovers

Growing up, Emerald had always hoped she would be as tall as her older sister, who is six-foot-three, and shunned coffee and soda after hearing a rumor that caffeine would stunt her growth.

‘When I was younger, I learned that caffeinated pop and smoking would stunt your growth,’ she said. ‘Smoking wasn’t an issue in our house – nobody did it.

‘I put more effort into not drinking any caffeine as I wanted to be taller than my sister and it paid off,’ she added. ‘Whether that’s down to genetics or my efforts is unknown.’

In ninth grade at school, Emerald began to notice that she was growing at a much quicker rate than that of her friends. 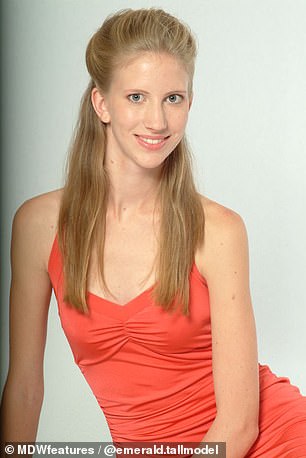 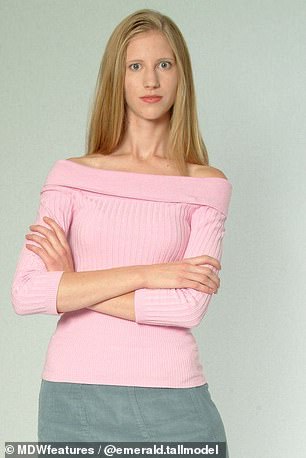 Throwbacks: Emerald took modeling class when I was 16 years old, but was later deemed ‘too’ tall’ by casting directors 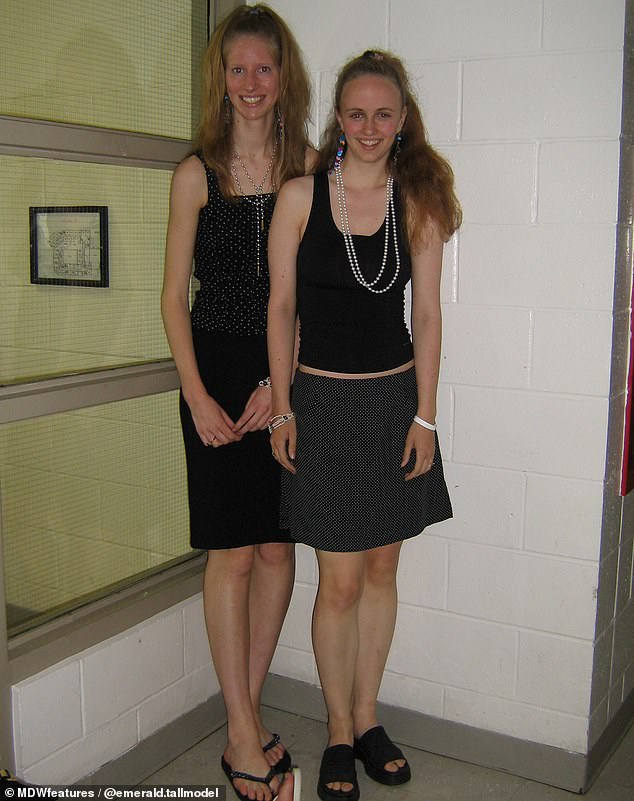 Trying to blend in: Emerald stopped wearing heeled shoes in school after she got noticeably taller than her friends 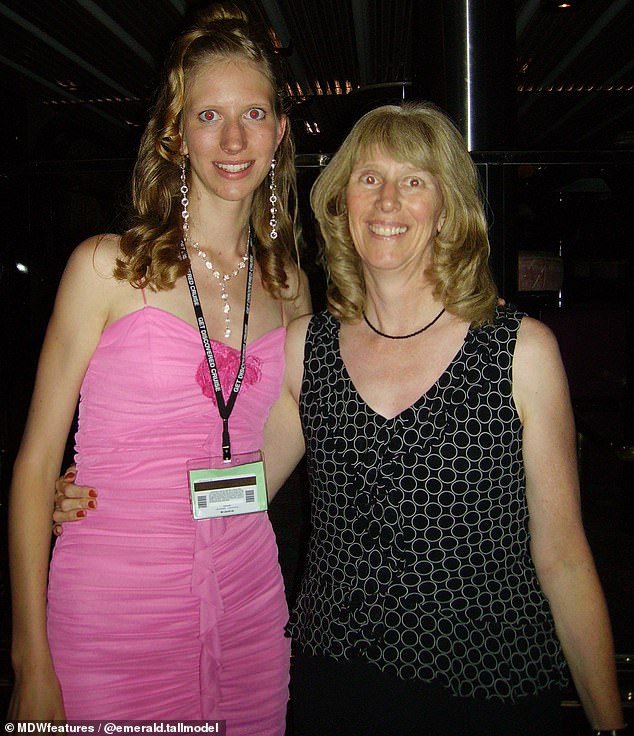 Guess why? Emerald’s classmates used to joke that she’d be a great basketball player

She began to opt for flat shoes instead of heels and preferred to be seated when conversing with others because it was more comfortable for her.

‘I used to feel a bit awkward in school. I would often bend down to fit in pictures – and still do,’ she recalled. ‘Everyone joked that the basketball coach would ask me to be a part of the team, but they never did.’

Emerald grew to six feet, four inches tall – beating her sister by a single inch – and learned to fully embrace her height, though some things are still difficult for her.

‘Clothes shopping has become easier now that I know which stores sell longer sizes,’ she said. ‘When I went wedding dress shopping, I had to have a seamstress drop the skirt so it was longer. 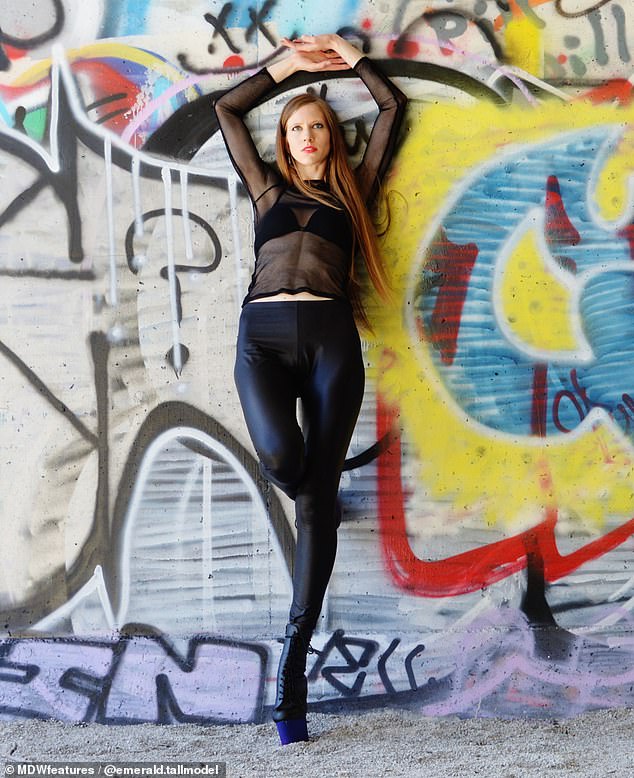 She got her wish! Growing up, Emerald had always hoped she would be as tall as her older sister, who is six-foot-three 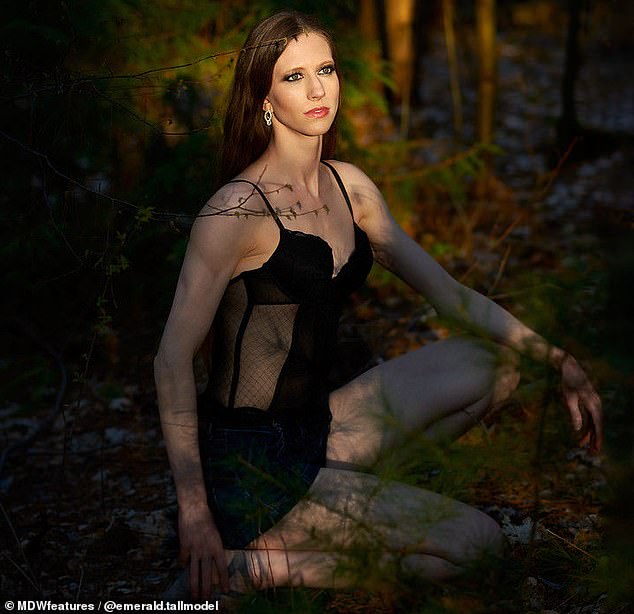 Dedicated: Emerald found her niche as a model when she started freelancing 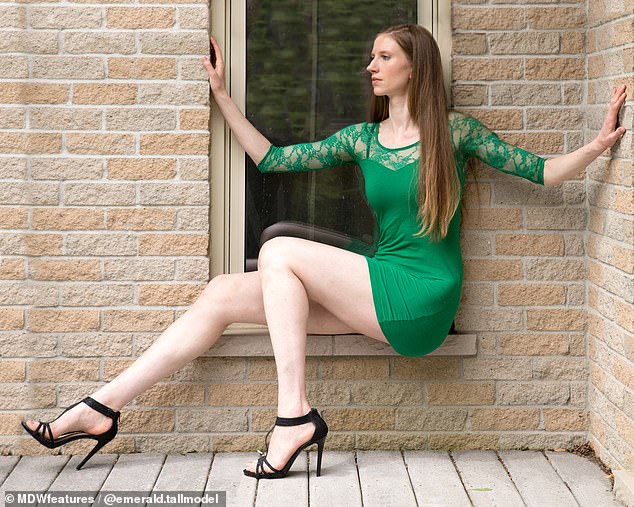 Hard to handle: The model admitted that it bothers her that strangers will shout at her on the street and ask how tall she is

‘Apartment hunting is the worst experience. My first question is how high are the ceilings which landlords always seem to lie about,’ she added.

‘Strangers sometimes shout, “How tall are you,” which bothers me. It’s more decent to come over and talk instead.’

Emerald is now spending more time focusing on her modeling career after initially struggling to find her place in the industry.

Models are well-known for their graceful heights, but casting directors often deemed Emerald to be ‘too tall.’ It wasn’t until she started freelancing and finding her own work that Emerald found her niche. 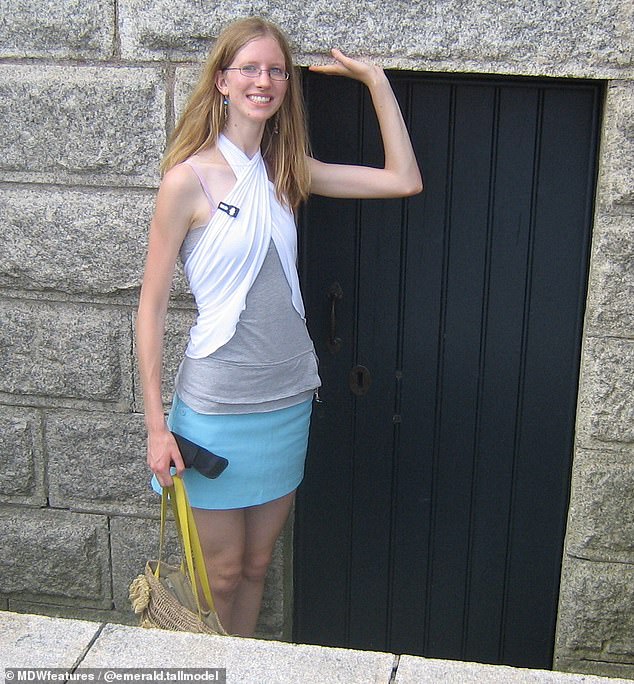 Struggles: Emerald said she always has to ask how high the ceilings and doorways are when she is apartment hunting 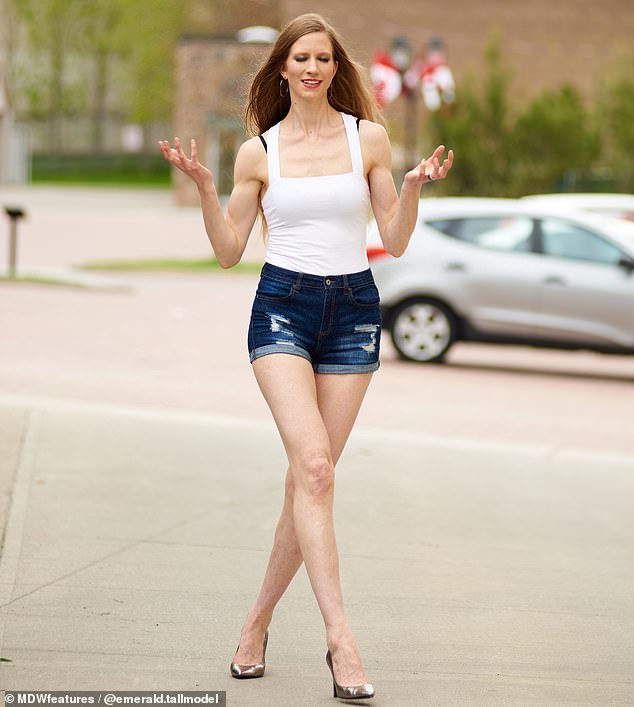 Embracing her height: Despite her struggles, Emerald said ‘being tall has its benefits’ 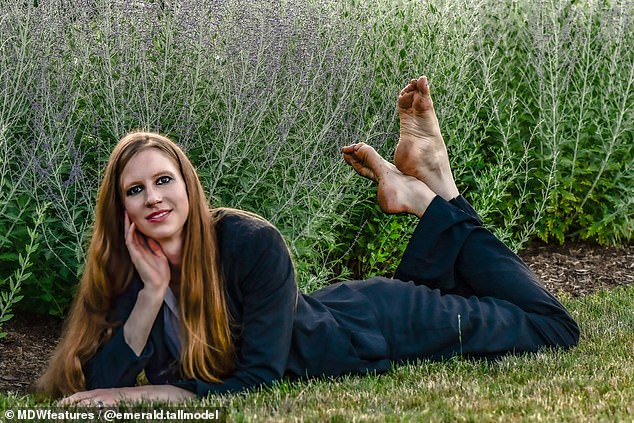 Benefits: Emerald said being tall means that she has ‘more storage space’ to ‘eat more,’ and she never needs a stool to reaching something

‘I started taking a modeling class when I was 16, which taught me to stand up straight and be more elegant,’ Emerald said.

‘I got a paid gig, but my hips and feet were too big to fit into their sample sizes, so I gave modeling up for a few years.

‘Now, I’m falling in love with it again and I’ve started working out, and building up my strength. I love meeting new people and traveling to new places on the job.’

‘Being tall has its benefits,’ she added. ‘I have more storage space so I can eat more. Most importantly – no stools or ladders needed.’