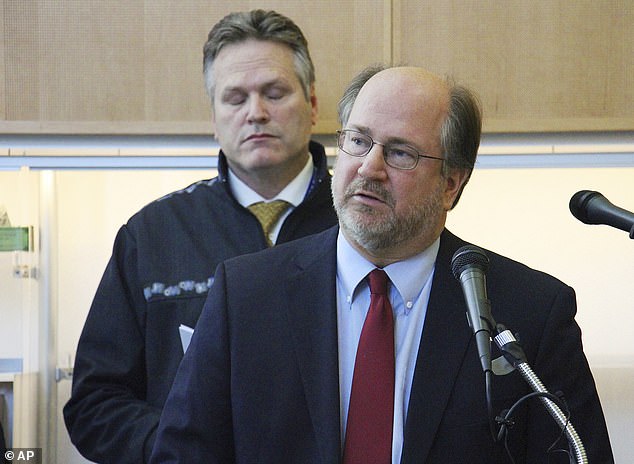 Alaska’s Attorney General has resigned just hours after it emerged publicly that he had sent hundreds of text messages to a young female employee who he had asked to come to his home more than a dozen times.

Attorney General Kevin Clarkson, 61, sent his resignation letter to Governor Mike Dunleavy on Tuesday after it was revealed he had sent a junior state employee 558 text messages back in March.

The Anchorage Daily News and ProPublica published screenshots of the text messages earlier on Tuesday.

Clarkson had been on an unexplained leave of absence since the beginning of the month while an investigation was carried out.

The female employee had raised concerns about the text messages she had received on her personal phone from Clarkson back in March, according to records obtained by the local outlet.

The records show Clarkson sent her 558 texts over a 27-day period and that he asked her to come to his home on 18 different occasions.

Attorney General Kevin Clarkson, 61, (speaking into the microphone) sent his resignation letter to Governor Mike Dunleavy on Tuesday after it was revealed he had sent a junior state employee 558 text messages back in March

His messages often included a kiss emoji and comments about her beauty.

Clarkson texted until the woman told him in April that he needed to respect workplace boundaries and that she doesn’t take late-night calls on her personal phone.

‘You’re beautiful… sweet dreams. Sorry to bother you,’ one text from Clarkson read, while another said: ‘So what are you doing sweet lady?’

‘Always nice to see you beautiful lady… You have to find a way to say yes and come over and let me cook for you,’ another said.

Soon after news of the texts emerged, Clarkson resigned and issued a statement in which he apologized to the female staffer for placing her in an ‘uncomfortable environment’ in the workplace.

Clarkson, who is married to a Colombian woman named Johanna Ferrer Zarache de Clarkson, admitted to sending the woman text messages, which he said were ‘g-rated’.

‘The topics of these texts ranged from food, to movies, to books, to family, and all were conversational and positive, were reciprocal, and were, I believed, mutual,’ he said.

‘I sent her pictures of food that I cooked from time to time. These texts included invitations for this person and her children to come to my home to share a meal, which she politely declined.

‘All of these texts were ‘G’ rated. In our texts we exchanged mutual endearments in words and emojis. On several occasions, this person initiated a friendly hug when I came to her work place and I reflexively gave her a peck on top of her head. 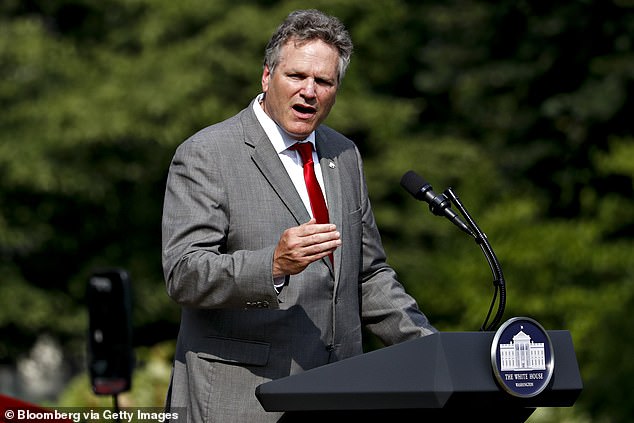 After receiving Clarkson’s resignation letter, Gov Dunleavy (above) issued a statement saying: ‘This administration has and always will expect the highest level of professional conduct in the workplace’. Alaska is one of the few states where an AG is not elected but is instead appointed by the Governor

‘In short, I believed we had a positive friendship borne of mutual respect and interests. What I failed to recognize is the impact that these interactions had on this person, due to the disparity in our workplace rank.

‘Of course, I should have recognized this from the start, and should have maintained a more distanced and professional relationship.

‘I am deeply sorry for the discomfort I caused this person, and only wish her well. When this person eventually expressed her discomfort to me, I immediately respected her wishes and ceased communicating with her by text.

‘She appropriately reported this situation to her supervisor, and I immediately and fully cooperated in the ensuing process, and have accepted the finding that my actions, however unintentionally, created an uncomfortable workplace environment for this employee.

‘I have accepted and am completing a period of unpaid leave as a consequence for my error in judgment, which I recognize was wholly and only mine.’

Clarkson went on to say that a person familiar with the situation had since leaked the texts to a ‘political operative’ and a member of the press.

The Anchorage Daily News and ProPublica said in their report that they had submitted a records request for the text messages from the Department of Law back in June but were told they had no such records.

The messages were eventually obtained from another undisclosed source.

The outlets said the woman did not provide copies of the texts and did not want to be involved with the article.

After receiving Clarkson’s resignation letter, Gov Dunleavy issued a statement saying: ‘This administration has and always will expect the highest level of professional conduct in the workplace.

‘There is nothing more important than the protection of our state employees, and that includes feeling safe when an employee is at work.

‘Kevin Clarkson has admitted to conduct in the workplace that did not live up to our high expectations, and this is deeply disappointing. This morning he took responsibility for the unintentional consequences of his actions and tendered his resignation to me. I have accepted it.’

Clarkson had been Attorney General since 2018. Alaska is one of the few states where an AG is not elected but is instead appointed by the Governor.

Earlier this year, it was revealed that Gov Dunleavy had sent an official request to President Donald Trump asking for help obtaining a visa for his Colombian wife’s six-year-old son to live in the US.

Clarkson said at the time that his wife Johanna Ferrer Zarache de Clarkson had obtained a green card in 2018 but they were unexpectedly unable to obtain a visa for her son.