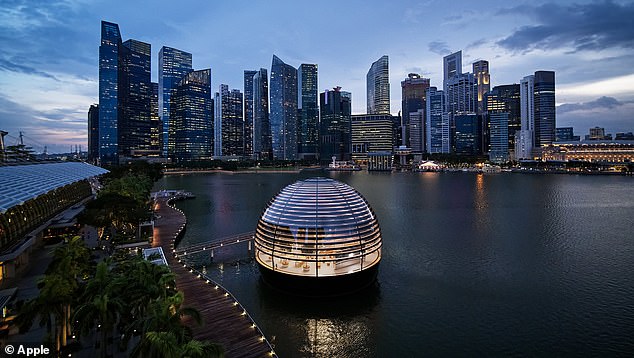 The company released new photos of the interior, which includes rows of trees, streaming sunlight and an underwater boardroom.

When the sun is out, the massive globe’s 114 glass panels will offer 360-degree panoramic views of the Singapore skyline and iconic waterfront.

At night, the company’s ‘most ambitious retail project’ will gently glow in a nod to the traditional paper lanterns carried by participants in the Mid-Autumn Festival.

Scroll down for videos

Apple is opening its first-ever floating Apple store September 10 in Singapore’s Marina Bay. The company released new photos of the interior, which includes rows of trees, streaming sunlight and an underwater boardroom

A narrow slit at the top, called an oculus, allows natural sunlight in and, from above, gives the appearance of a glass iris.

The oculus was inspired by the Pantheon in Rome, the company said in a release.

Inside, uniquely shaped baffles counter the angle of the sun’s rays and provide a nighttime lighting effect.

A statement on the Apple website promises the store ‘will be at the heart of creativity, a place we’ve made for you to capture your ideas and passions.’ 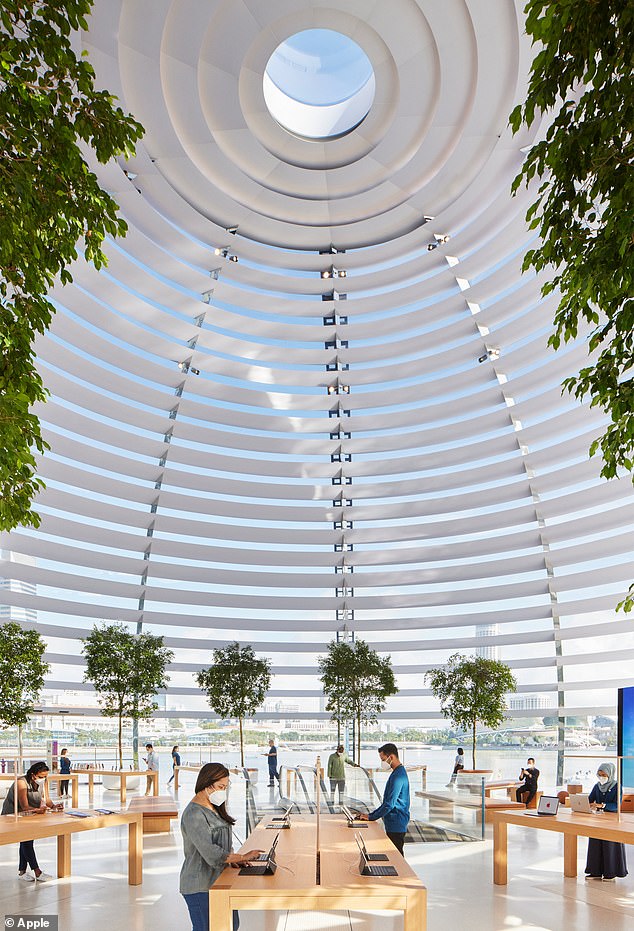 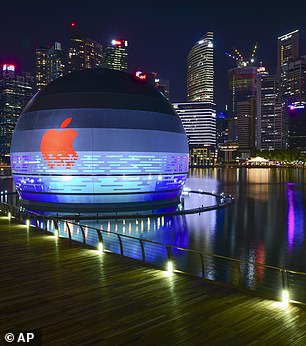 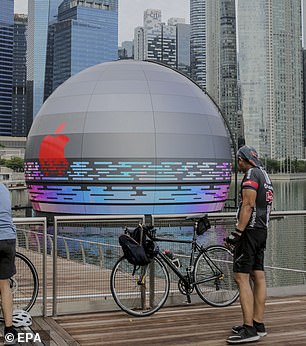 When the sun is out, the massive globe’s 114 glass panels will offer panoramic views of the Singapore skyline and waterfront. At night, it will gently glow in a nod to the traditional paper lanterns carried by participants in the Mid-Autumn Festival

And those ideas can be expressed in almost any tongue – the store’s 148-person staff speaks more than 23 languages in all.

Inside the massive dome, customers will find a Genius bar and the usual array of Apple products and accessories for sale, nestled inside rows of trees.

‘The green garden city of Singapore flows into the store,’ the company said ‘providing additional shading and soft shadows through the foliage.’ 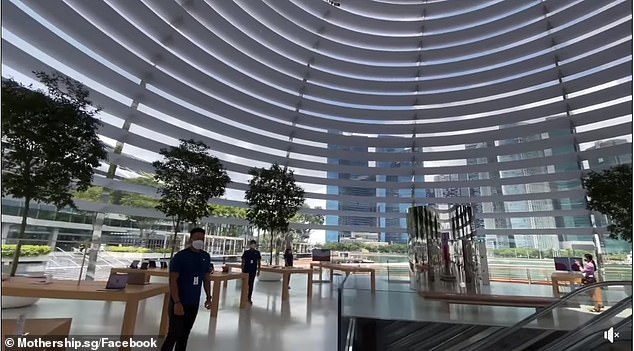 Inside the massive dome, customers will find a Genius bar and the usual array of Apple products and accessories, nestled inside rows of trees. The store’s 148-person staff speaks a total of more than 23 languages 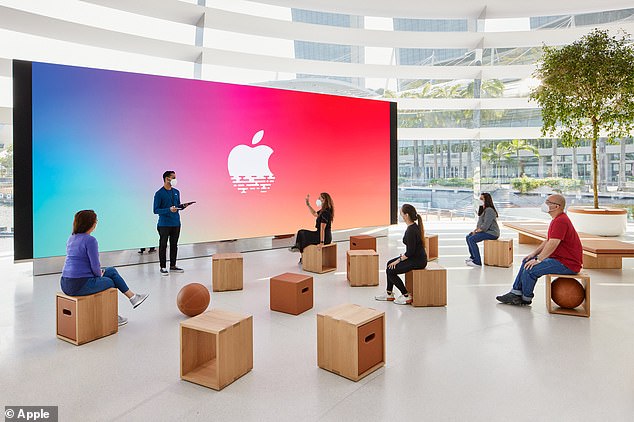 A video wall serves as the stage for Today at Apple sessions with local artists, musicians, and creators 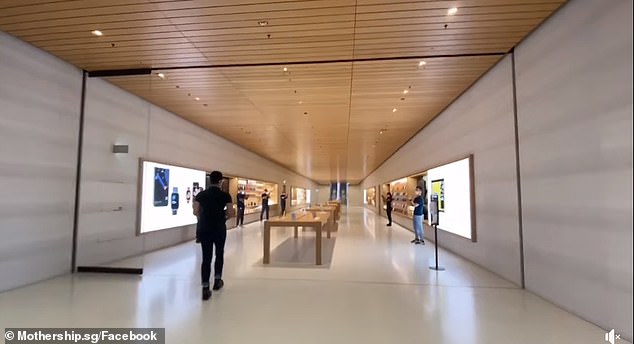 The new shop opens Thursday at 10:30 am local time. It will be Apple’s third in Singapore, following locations in Orchard Road and Singapore Changi Airport

A video wall serves as the stage for Today at Apple sessions featuring local artists, musicians, and creators.

On the lower level, entrepreneurs and developers can meet with Apple team members in the company’s first underwater boardroom.

The store also has an elevated boardwalk and an underwater tunnel connecting to the shops at Marina Bay Sands.

Apple’s history in Singapore goes back more than four decades, with the first corporate office opened in Ang Mo Kio in the northeast.

In 1981, that team produced most of the printed circuit boards used in Apple II computers worldwide.

“We couldn’t be more excited to open the breathtaking Apple Marina Bay Sands in Singapore, building on our commitment to this special place that began more than 40 years ago,” said Deirdre O’Brien, Apple’s senior vice president of Retail + People.

“Our passionate and talented team is ready to welcome this community to our new store and deliver the care and support that our customers around the world love.”

Due to the pandemic, customers will have to make an appointment and occupancy will be limited.

Masks and temperature checks will also be required.

Visitors flock to the stunning rooftop infinity pool and observation deck, as well as nearby attractions like the ArtScience Museum and the Gardens by the Bay. 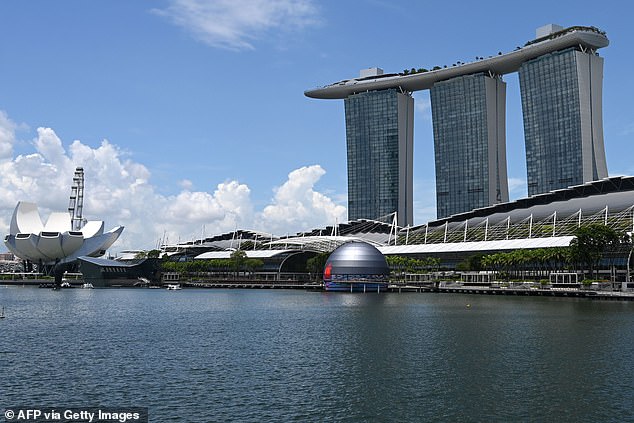 Apple already has two locations in Singapore, one on Orchard Road and another in Singapore Changi Airport.

When he visited Singapore in December, Apple CEO said the city-state ‘could use a third store,’ commenting that the Orchard Road store was ‘pretty full.’

‘We try to look at where people are and where people live and arrange the Apple stores where it’s reasonably convenient to go to,’ Cook told The Straits Times.

This is the first Apple Store that floats on the water, but the company has made design a key element across its 511 consumer destinations. 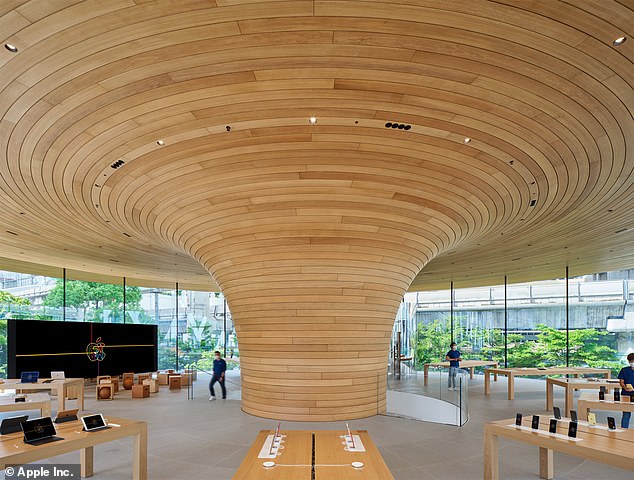 Forward-thinking design is a major element across Apple’s 511 consumer outlets. Apple Central World, a two-story shop in Bangkok’s bustling Ratchaprasong district, has  a cantilevered tree ‘canopy’ at its center

In July, Apple opened a two-story store in Bangkok’s bustling Ratchaprasong district with a cantilevered tree ‘canopy’ at its center.

Entrances on the upper and lower levels of Apple Central World connect visitors directly to a nearby shopping center and Skytrain station. 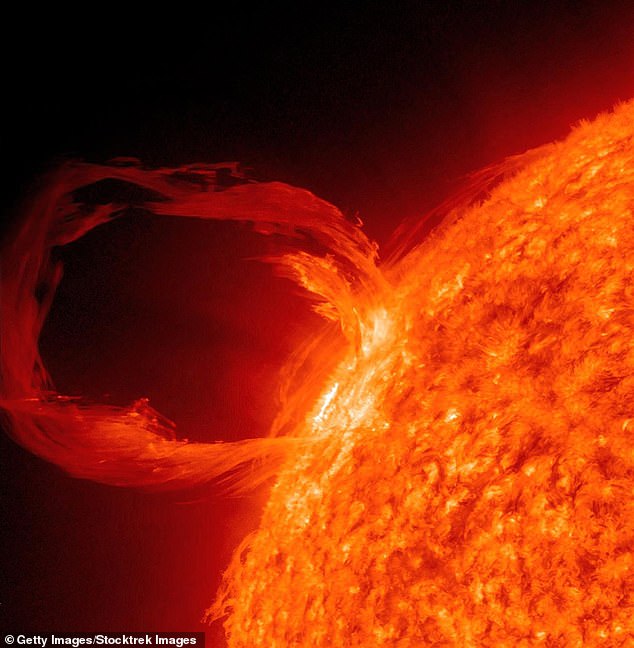 Earthquakes could be triggered by the cumulative mass of protons from the sun, according to study 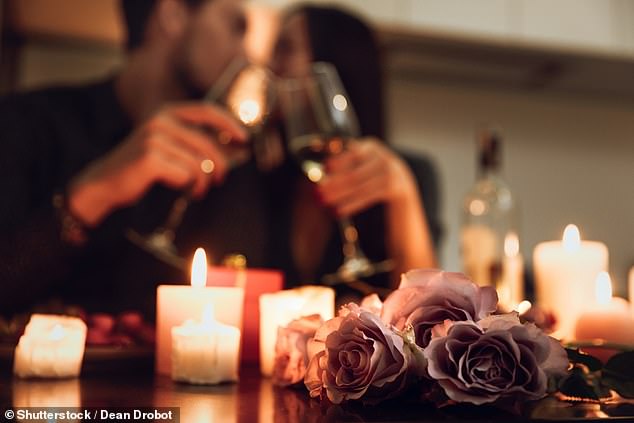 Dating: couples base their decision to marry on 'rituals' not spontaneous romantic acts, study finds 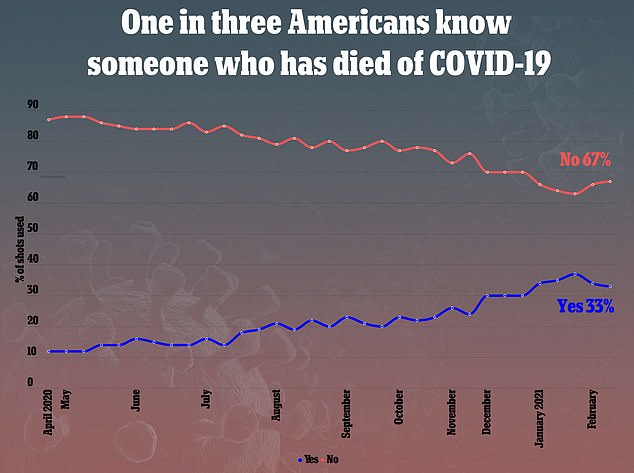 Covid US: 33% knew someone who has died from infection, says poll