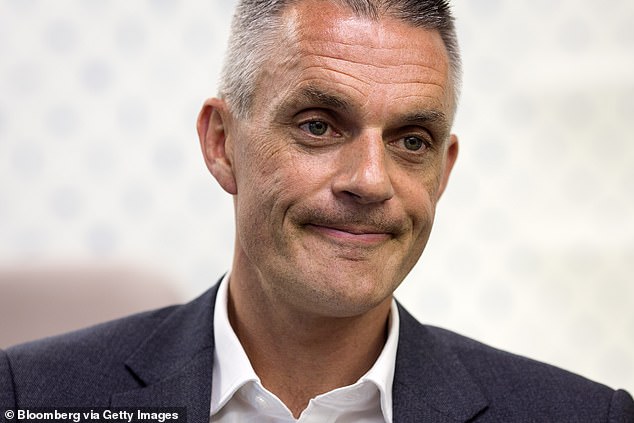 By Helena Kelly For The Daily Mail

The BBC‘s new director-general is ‘open’ to implementing a subscription model to replace the broadcaster’s licence fee, it was reported last night

Tim Davie has reportedly been told to come up with a viable funding model to replace the fee when he takes up his new role this week.

A Conservative minister told the Daily Telegraph that there is a ‘real optimism’ at the BBC that it can thrive without the fee.

Among the measures reportedly being considered by Mr Davie, 53, is a subscription model service, similar to Netflix or Amazon Prime.

Tim Davie, 53, the BBC’s new director general being interviewed in London in 2016

The minister told the Telegraph: ‘There is a real optimism that the BBC will come up with a palatable alternative to the licence fee themselves.

‘Tim Davie seems open to the idea of a subscription model.’

If Mr Davie is unable to come up with a viable model, he risks facing a battle when the BBC charter is renewed in 2027.

It is understood that Mr Davie will not address the licence fee row when he makes his first speech in his new role later this week.

But BBC insiders told the Telegraph that Mr Davie is concerned the broadcaster is creating too much left-wing, London-centric content.

Mr Davie is also planning to launch a crackdown on BBC presenters who express their opinions on social media, according to the reports.

It came amid reports that ministers are set to announce the decriminalisation of the licence fee within weeks.

From 2022, people who dodge their licence fee payments will face civil penalties rather than criminal prosecution.

The BBC Licence Fee (Civil Penalty) Bill is due for its second reading in parliament in November.

A BBC spokesman told the Telegraph: ‘The licence fee is a way of funding the BBC until at least 2027 and our focus is on providing the best possible value to the public who pay for us.’