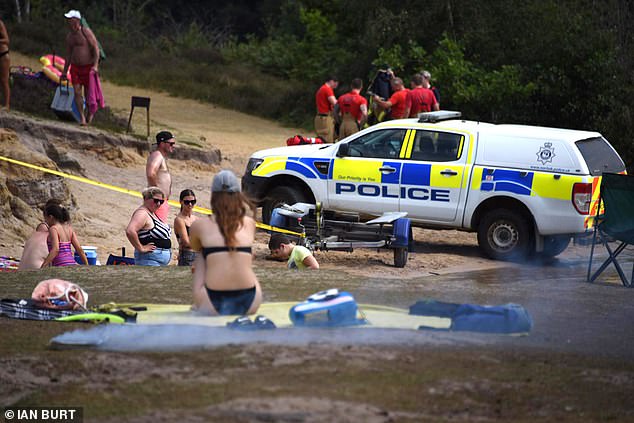 By Emer Scully For Mailonline

A man in his 20s has drowned after getting ‘into difficulty’ in a water-filled quarry as temperatures soared today.

The man’s body was pulled from the water at Bawsey Pits near King’s Lynn in Norfolk earlier this afternoon, police confirmed.

Emergency services were called to the scene at about 11.30am on Saturday after the man was reported missing.

Superintendent Malcolm Cooke, from Norfolk Constabulary, said: ‘Colleagues from Norfolk Fire and Rescue Service and the East of England Ambulance Service assisted officers in the search.

‘The body of the man, aged in his 20s, was recovered from the water and he was sadly pronounced dead at the scene.

The man’s body was pulled from the water at Bawsey Pits near King’s Lynn in Norfolk, police confirmed. Pictured, sun-seekers watched on as officials carried out the search

‘Our heartfelt condolences go out to his family at this time.’

Four crews of firefighters used two rigid inflatable boats and a drone to search for any sign of the swimmer after he got into difficulty in the water.

Norfolk Police confirmed they were called to ‘reports of a missing male who got into difficulty in the water.’

There have been frequent warnings about the dangers of swimming in the former quarry pits at Bawsey Country Park in recent years. 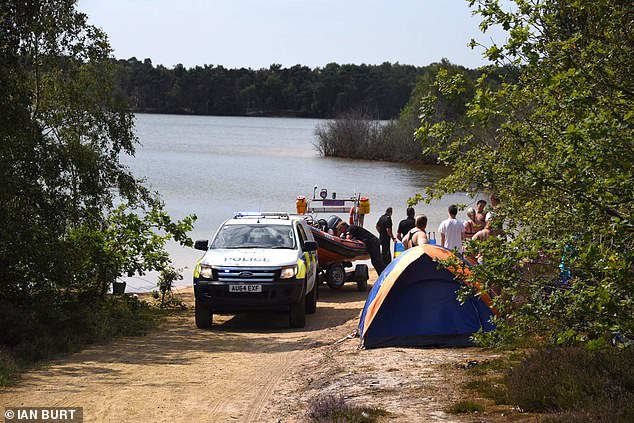 Emergency services were called to the scene at about 11.30am on Saturday after a man was reported missing. Pictured, a police car brings a rigid boat to the water-filled pit

Signs are in place warning swimming is banned.

A 16-year-old boy from east London drowned at the pits in July 2013. A local man Ryan Pettegell, 41, also drowned on the same day after he he swam out to look for the missing boy.

A Norfolk Police police spokesperson said today; ‘Colleagues from Norfolk Fire and Rescue Service have been assisting officers in the search and the incident is ongoing. 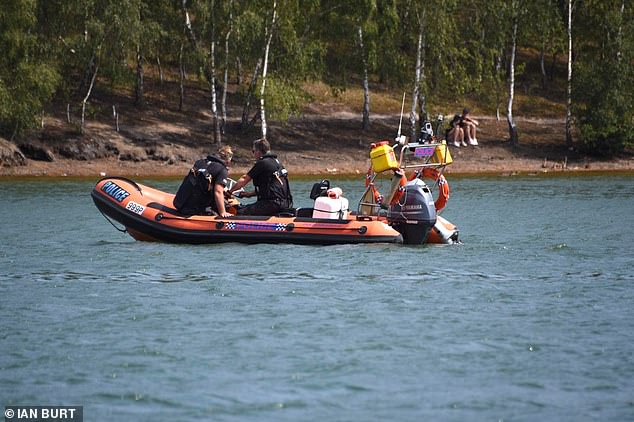 Despite many warnings about going into the water in the hot weather, people have been ignoring the recommendations and the emergency services were forced to search for the missing swimmer

‘No further details will be released at this stage and an update will be issued in due course.’

It comes as temperatures reached 95F at Frittenden in Kent early this afternoon.

Saturday started with an ‘impressive’ 68F difference between parts of Scotland and south-east England, the Met Office pointed out.

Forecaster Marco Petagna earlier said a breeze along the North Sea coast would keep temperatures in the high teens there, while England and Wales would generally see the high 20Cs or low 30Cs – with cooler temperatures in Scotland and Northern Ireland.