Southern England will melt in 99F (37C) temperatures by the weekend as the Met Office issues a health alert – but rain today hit northern parts of the country as well as Scotland.

The scorching air from Europe at the end of the week will come after the wet weather that has lashed the North West clears by tomorrow.

The Met Office put out a yellow weather warning for north of the border today as west Scotland – including Glasgow and Stirling – was drenched.

The heat from the Continent is due to be carried on southerly winds across the majority of England, meaning hot and dry conditions for many.

Temperatures could peak at around 90F (32C) for the south of England on Thursday and 79F (26C) in the north of the country.

While the Bahamas, in the Caribbean, could be as hot as 89F (31C) on Friday, the Met Office has said temperatures in England could reach 99F (37C).

Casablanca, in Morocco, is due to see highs of 81F (27C) on Friday, by comparison. While Lisbon has seen recent hot weather, it is expected to have peaked by the weekend with temperatures around 86F (30C). 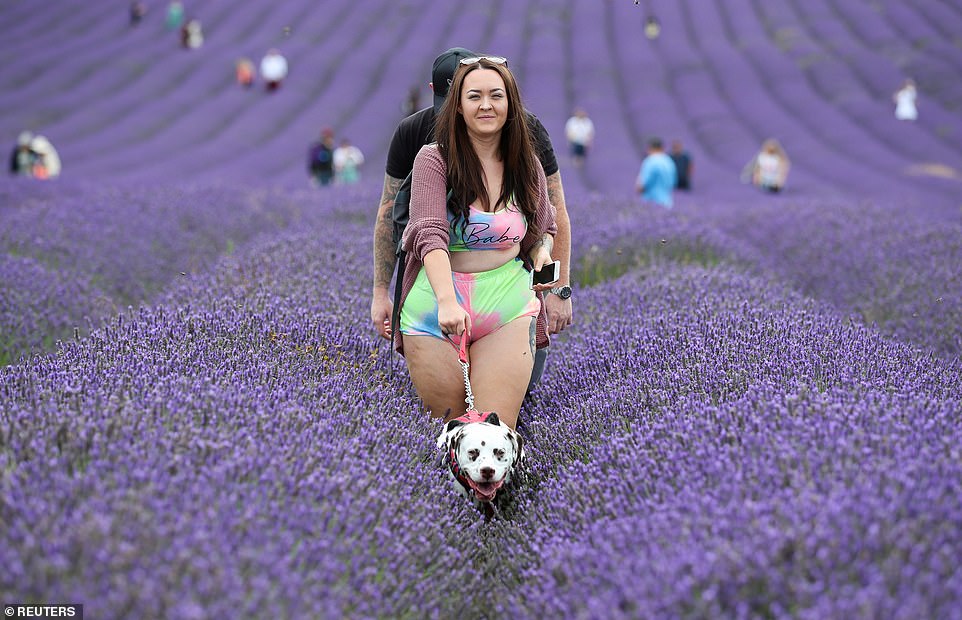 People with a dog walk in a lavender field at Hitchin Lavender farm in Ickleford on Tuesday. Temperatures could peak at around 90F (32C) for the south of England on Thursday and 79F (26C) in the north of the country 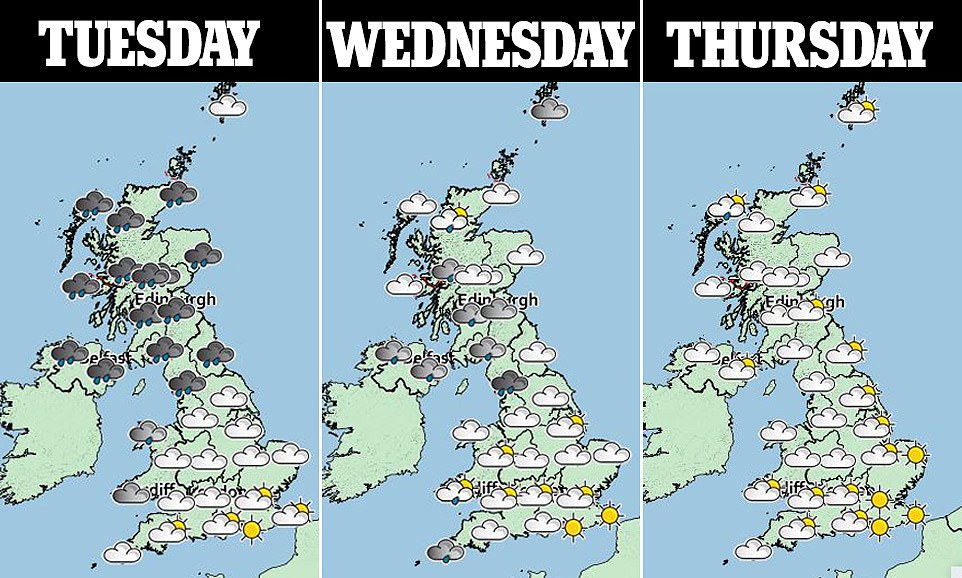 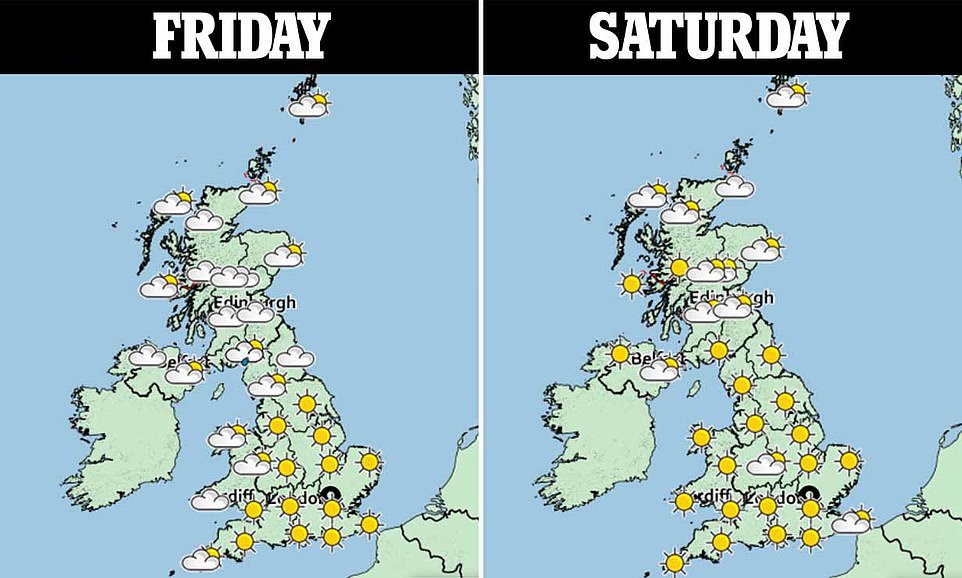 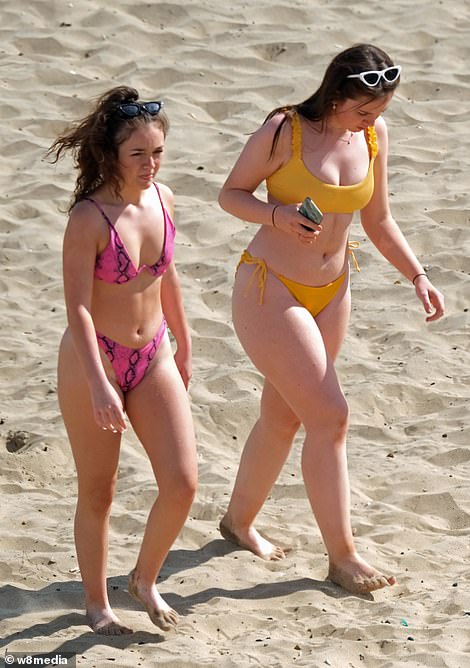 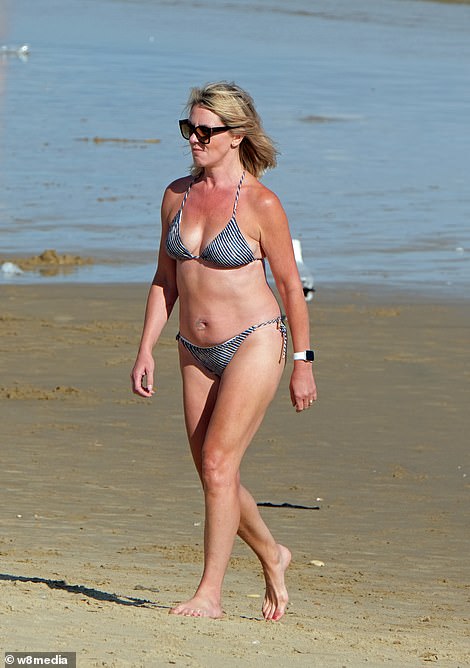 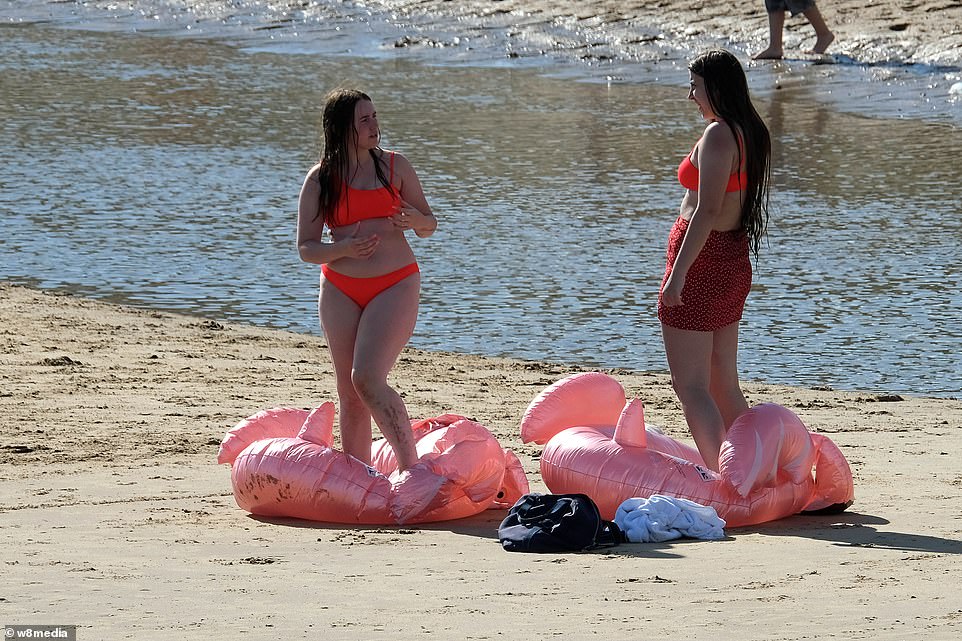 Two friends have a chat after swimming in the sea off the coast of Bournemouth this afternoon, with their inflatables wrapped around their ankles 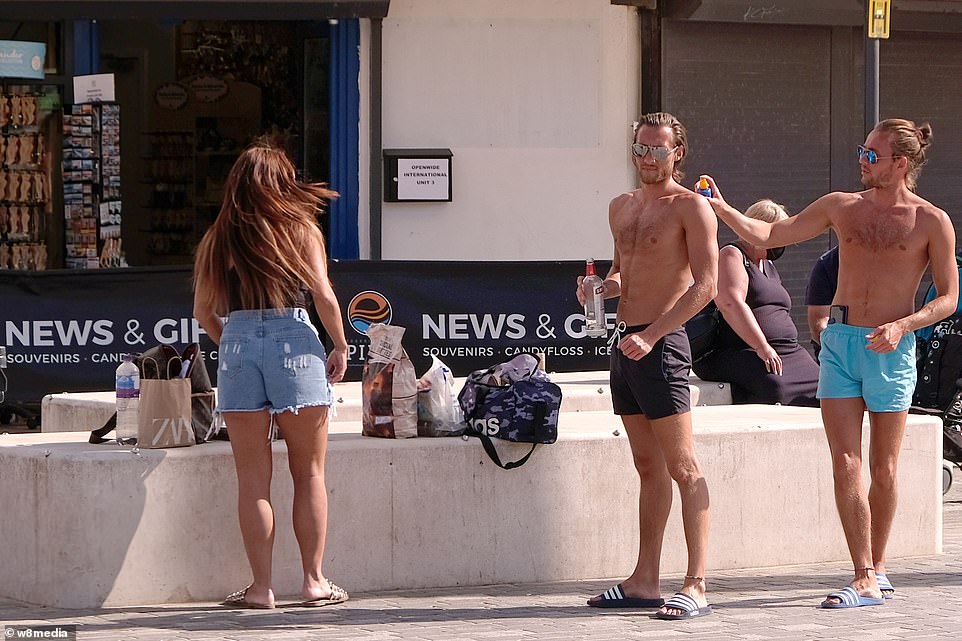 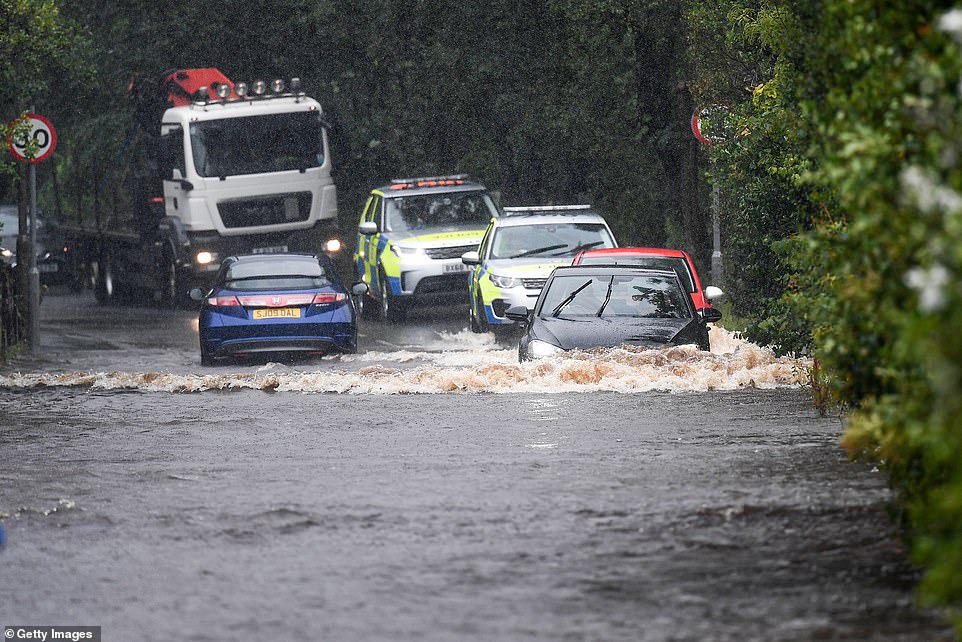 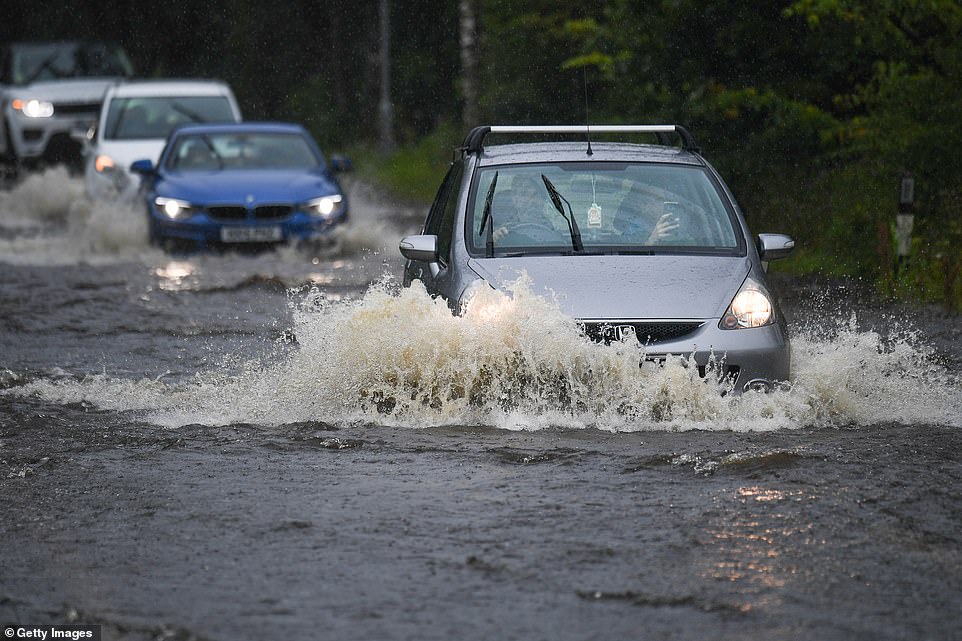 The heartbroken daughter of a father-of-seven who died while rescuing three of his children after they got caught in a rip tide has revealed how he ‘used all his strength’ to give them a final smile.

Jonathan ‘Joff’ Stevens, 36, was with the youngsters aged ten to 12 at Barmouth in North Wales when they began to struggle in the water yesterday lunchtime.

The plasterer tried to pull the children to safety, and a major rescue operation was launched involving a lifeboat and Coastguard search and rescue helicopter. 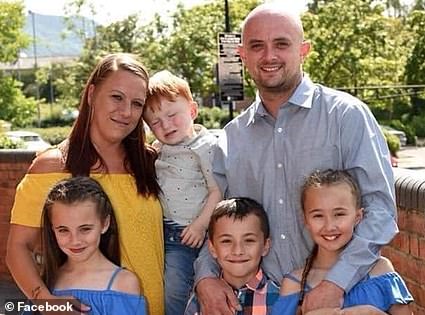 Jonathan Stevens is pictured with his partner Laura Burford and four of their children – including Lacey (bottom right) and Jack (bottom centre), whom he rescued yesterday

Mr Stevens, from Telford, Shropshire, was then pulled from the water and flown to Gwynedd Hospital in Bangor in an air ambulance but died.

Now, his daughter Lauren, 11, has shared how she ran to lifeguards and pleaded ‘my dad is drowning, please save him’.

In a tragic revelation, she also said her father smiled at his children one last time after saving Lacey, 12, and Jack, ten.

Earlier, Mr Stevens’ heartbroken partner Laura Burford, who was back home 80 miles away when the tragedy happened, said he had died a hero while ‘saving their babies’.

Daughter Lauren told the Sun that the lifeguards rushed to save her father, carrying him to the beach, adding that he looked ‘lifeless’.

She said: ‘Dad opened his eyes and looked over to me, Joshua, and Lacey and Jack, who by now were back with us and he gave us a smile.

‘But the next second he collapsed again and the lifeguards carried him in, laid him down on the sand and gave him CPR. He never opened his eyes again.

‘I think Dad had used his last bit of strength to open his eyes and smile at us and when he saw we were all okay he knew he could let go and die happily.’

Although the hot spell is due to last throughout Saturday, the temperature is due to drop and by Sunday some parts of the country could see thunder storms.

The Met Office has also issued a heat health alert for the south east of England and warned UV levels could be high in some parts.

High temperatures on Saturday could see heatwave conditions being met in southern and the south east of England.

Bonnie Diamond, a forecaster for the Met Office, said: ‘It’s a bit of an unsettled start in north western parts but for the southern half of the country, it is a dry first half of the week.

‘The heat turns up from Thursday with warmer weather across the whole of the country. It will be really quite hot across parts of the south east of England where we expect to see temperatures in the low to mid-30s, with the peak of the heat on Friday.

‘Southerly winds across England are going to bring warm air over from Europe and further south it is going to be hot. Temperatures in England and south Wales will be in the high 20s and low 30s.

‘By Friday, we will be seeing the hottest of the spell with temperatures widely over 30C (86F).

‘Saturday looks to be very warm or hot for many, although not quite as hot as Friday. Sunday we should have sunshine to go along with the temperatures. There is a possibility of thunder storms for some part of the country.’

Met Office Chief Meteorologist Frank Saunders added: ‘Most of us will see a spell of warm, summery weather later this week, with hot weather developing across southern parts of the UK.

‘From Thursday temperatures will be in the low- to mid-20s Celsius for Northern Ireland, Scotland and north Wales, but it will be much warmer across southern and central areas, with temperatures widely reaching around 30 Celsius, possibly 32 Celsius in the southeast of England.

‘It’ll be another hot day on Friday with temperatures widely reaching 30 Celsius, or higher, in central, southern and some northern parts of England. It is likely to be hotter still in southeast England where 34 to 37 Celsius is possible.

‘Saturday will likely be another hot day for southern and central parts of the UK, with heatwave conditions possibly being met in parts of southern and southeast England.’

It follows a weekend of hot weather which saw some of England’s most popular tourist hotspots deluged with visitors.

The Met Office confirmed last Friday was the third hottest day since records began in 1910, after 100.04F (37.8C) was recorded at London’s Heathrow Airport.

There are fears Cornwall could face being locked down as locals blast holidaymakers for not wearing face coverings or respecting social distancing.

The county’s narrow streets have been flooded with tourists and the local council was forced to deploy street patrols to reprimand rule breakers.

Deputy Leader of Cornwall Council Adam Paynter warned a local lockdown – as seen in Leicester and parts of the North West – would spell doom for the staycation season. 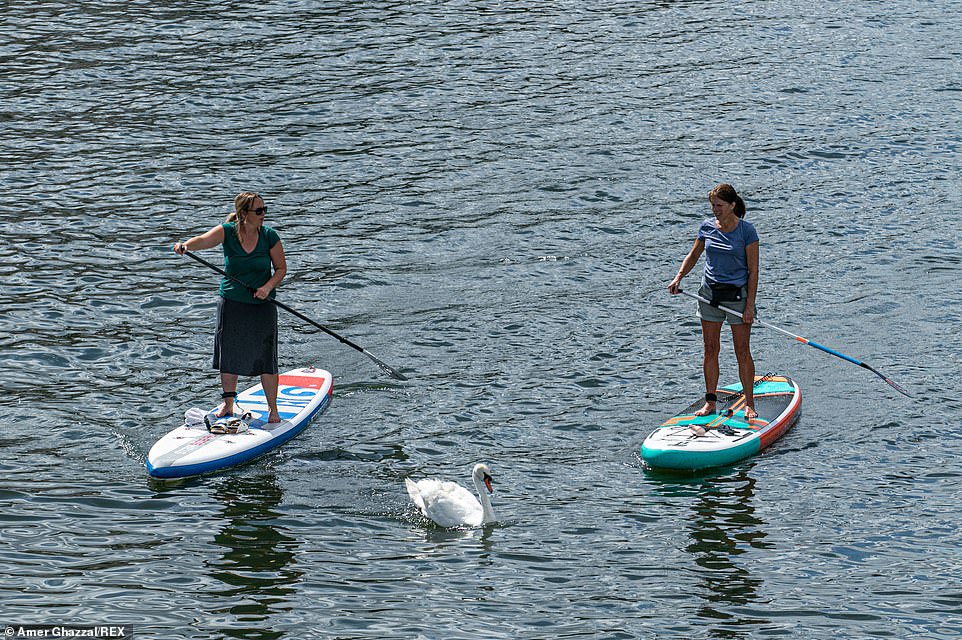 Paddleboarders take a leisurely trip along the River Thames in Kingston, Greater London, this afternoon as a swan swims just inches away 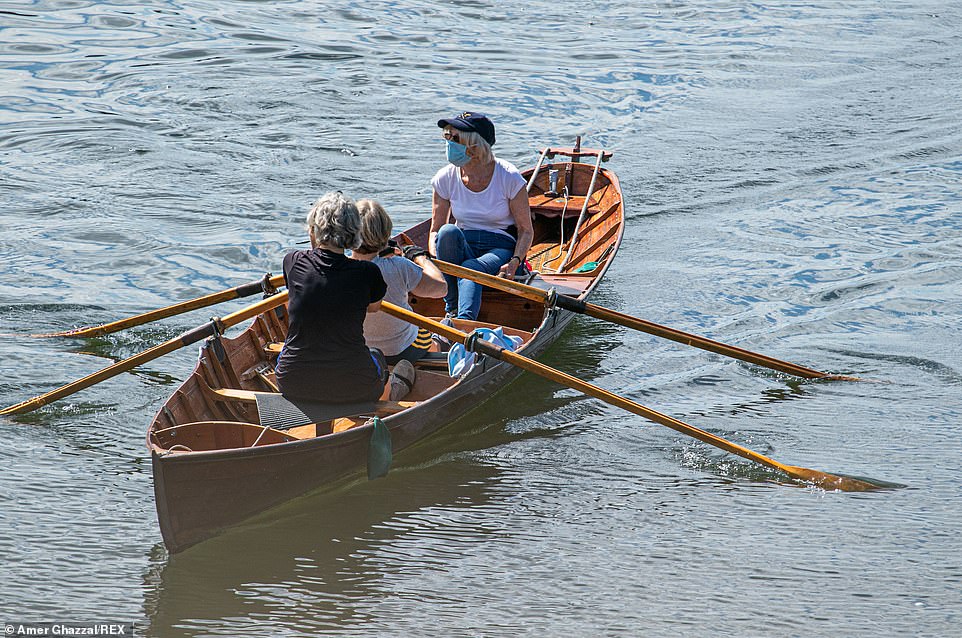 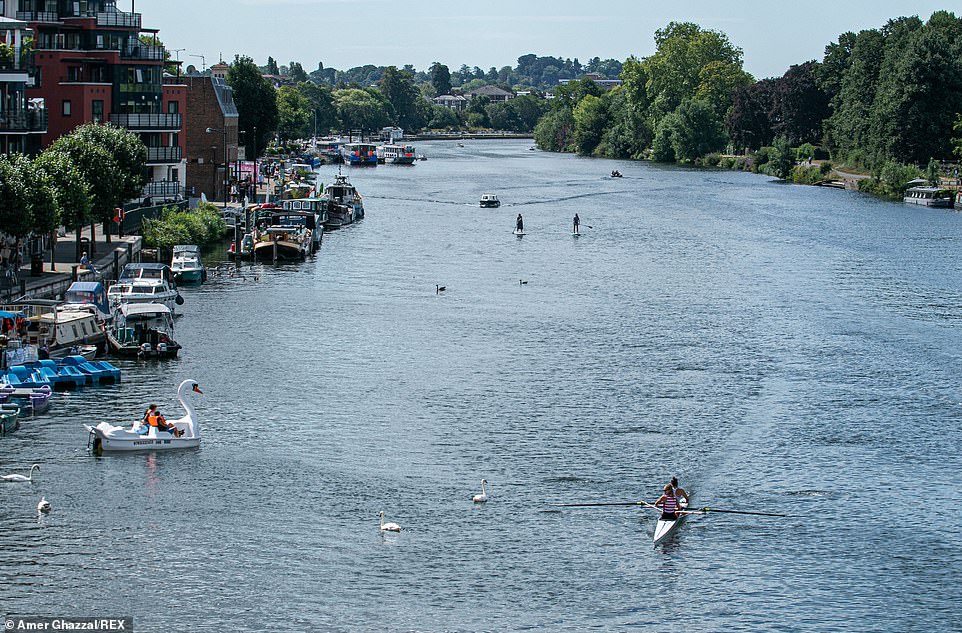 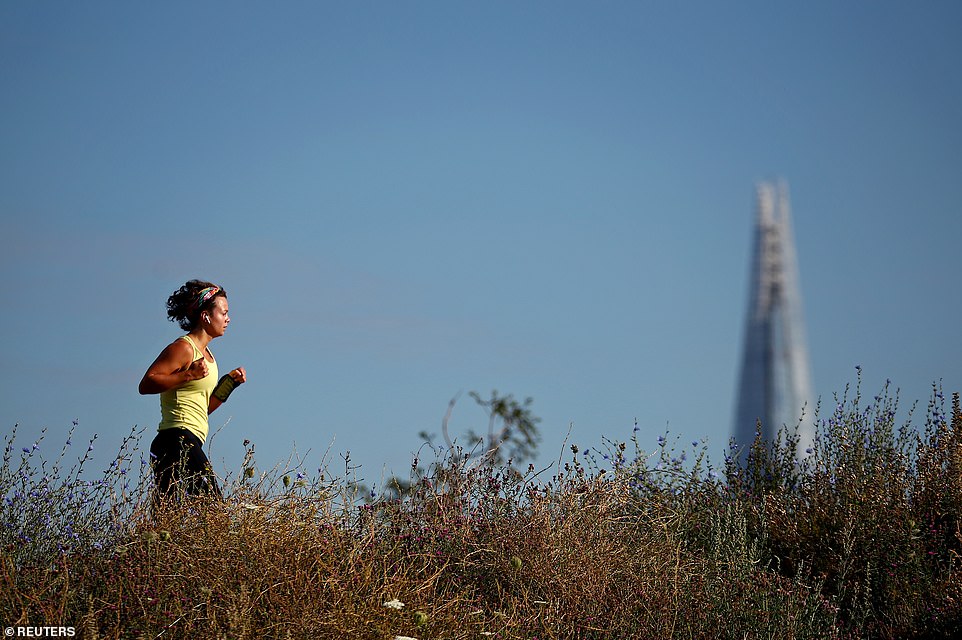 A woman jogs through Burgess Park, as the iconic Shard is seen in the background, in London this morning as the sun came out again 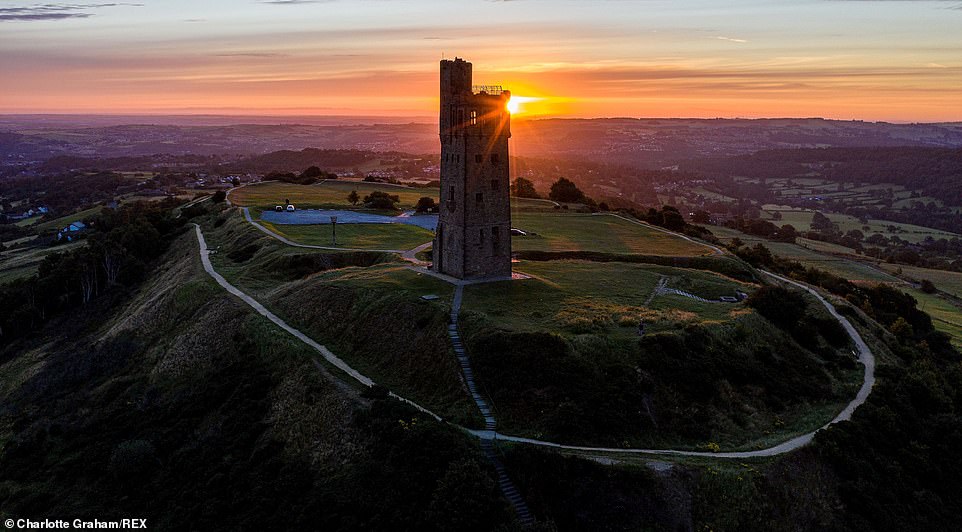 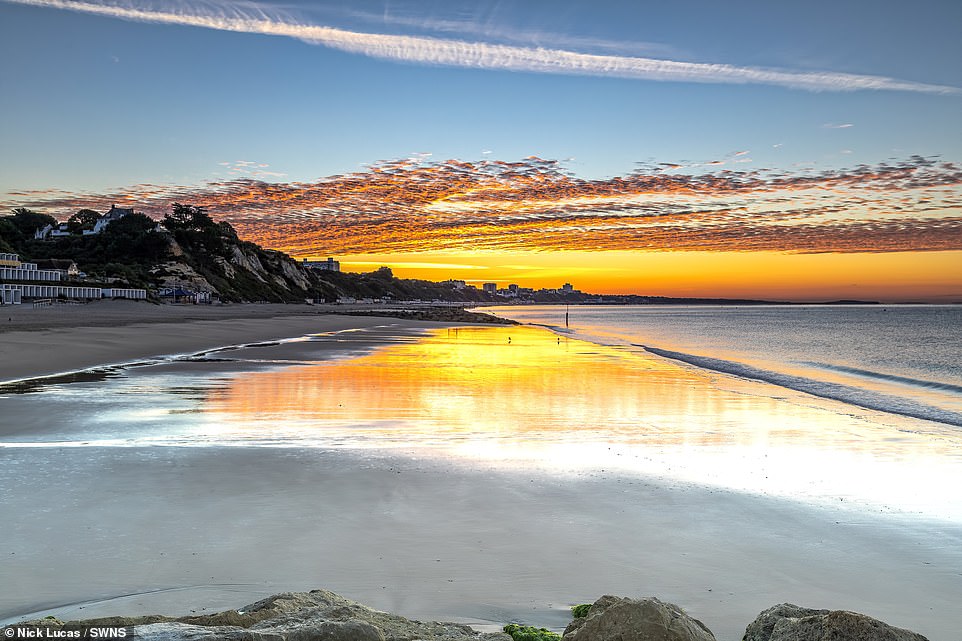 A beautiful sunrise at Branksome Chine, Bournemouth, Dorset, this morning sees the sky reflect off the sea-covered sand

The stunning ‘Sturgeon moon’ is pictured

The world looked up in wonder on Sunday night as the August sturgeon moon rose in the night sky. Photographers around the world captured incredible shots of the full moon sitting above iconic landmarks.

The huge moon was seen behind cathedrals in Colombia, the London skyline, the Statue of Liberty in New York and more. Taking its name from Native American folklore, the August ‘sturgeon moon’ was named after the river fish common in New England.

Native American tribes in the area named the moon after the fish because sturgeons were most readily caught in August. The August full moon also goes by other names, including the ‘Barley Moon,’ ‘Green Corn Moon’, ‘Fruit Moon’ or ‘Grain Moon’, as it is referred to in the UK. 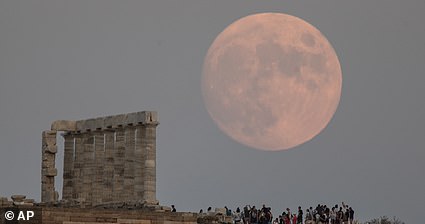 The ‘sturgeon moon’ rises behind Temple of Poseidon in Greece

He told Cornwall Live: ‘I urge all visitors to Cornwall to follow guidelines such as washing hands, wearing a mask when required to and maintaining a social distance.

‘We want to avoid the local lockdowns that have happened further north that have seen places shut down and we want to make sure the attractions stay open for local and visitors to enjoy and don’t want to see anything closed and the best way to achieve that is if people do all they can to follow the rules to avoid spreading the coronavirus. If they do that, they’ll remain open.’

He added: ‘Just because you’re on holiday it doesn’t mean you can just forget everything. There have been reports that some people when refusing to wear a mask have said they’ve come down to Cornwall to get away from it as if the coronavirus doesn’t exist in Cornwall when it does. People need to be sensible and follow all the guidelines.’

Nearly 20million Britons plan to go on a staycation holiday in the UK this year, a poll found yesterday, amid fears over a fresh stampede of revellers to beauty spots.

Tourists are expected to flock back to beaches across the country as temperatures up to 99F (37C) sweep in from central Europe by the end of the week amid a level two heat warning.

A YouGov poll found 28 per cent of Britons plan to take a holiday in the UK this year.

It is the equivalent of about 19million people.

Meanwhile only 9 per cent will go abroad and a further 49 per cent do not intend on holidaying. 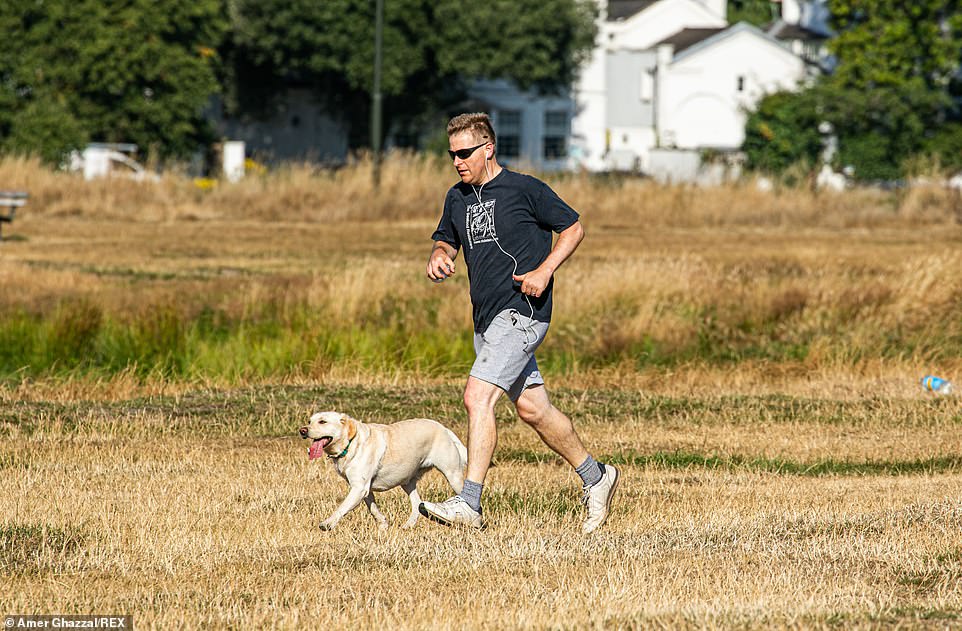 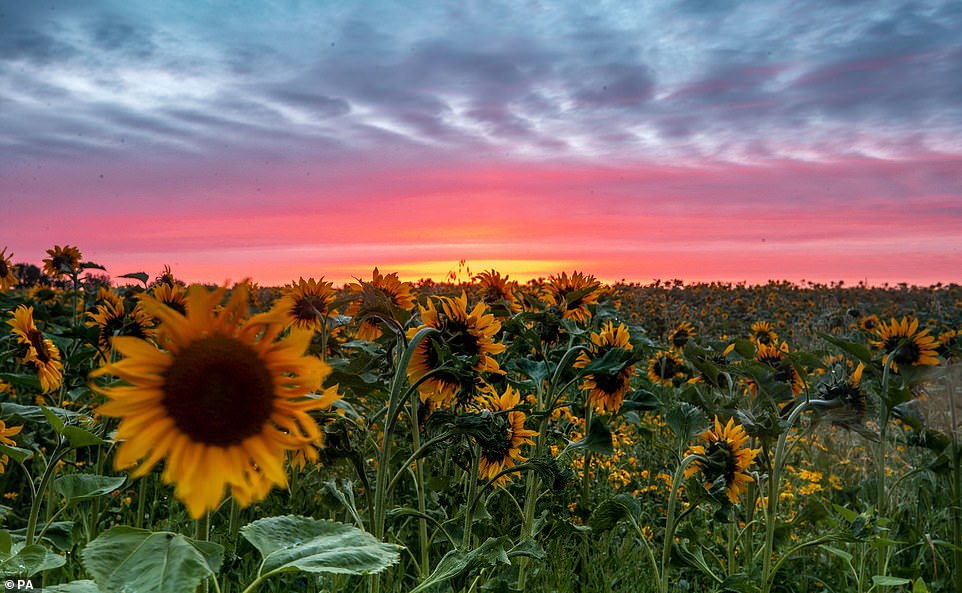 Red sky in the morning, shepherds’ warning: Rain looks set for the Sunflower Maze in Tarbock, Merseyside, as it wakes up to a crimson sky today 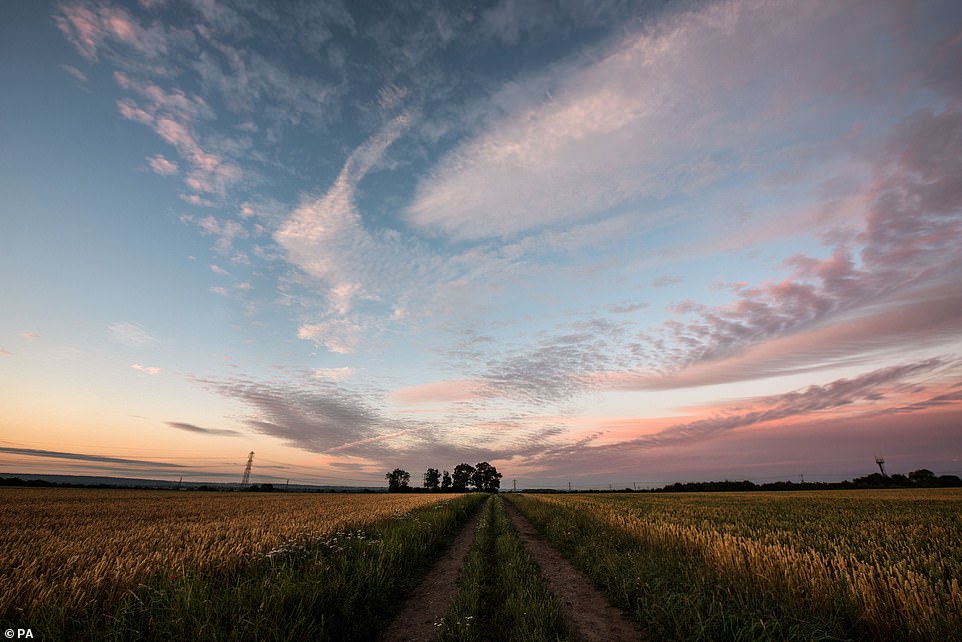 A field in Bingham, Nottinghamshire, sits under as stunning sky ahead of a warm day in the East Midlands before temperatures rocket at the weekend 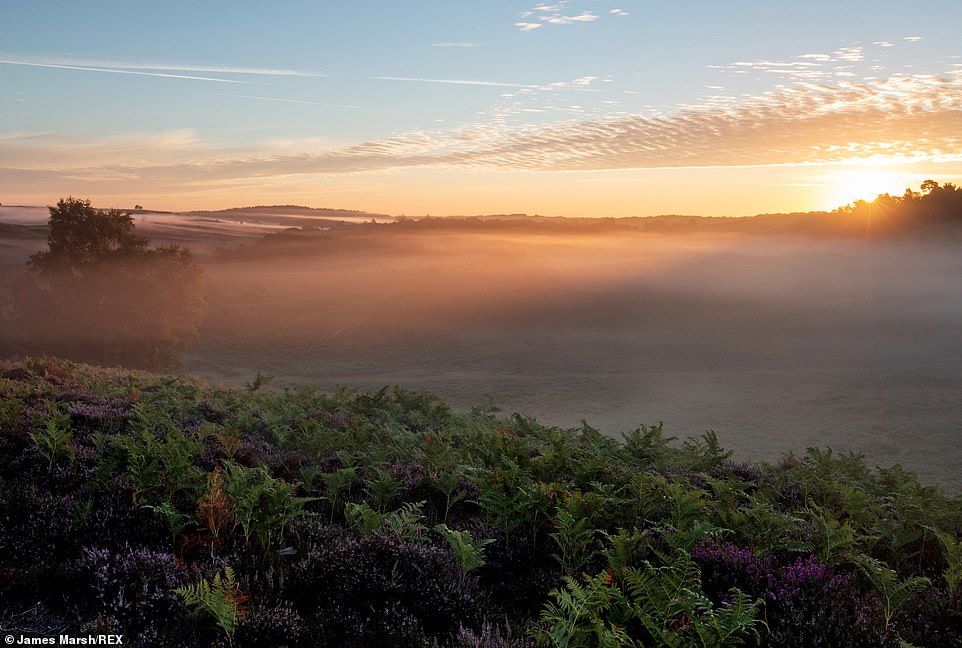 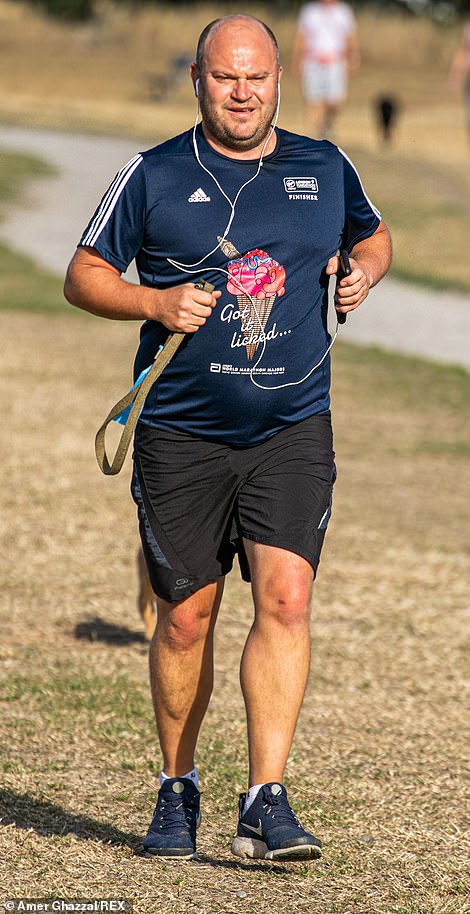 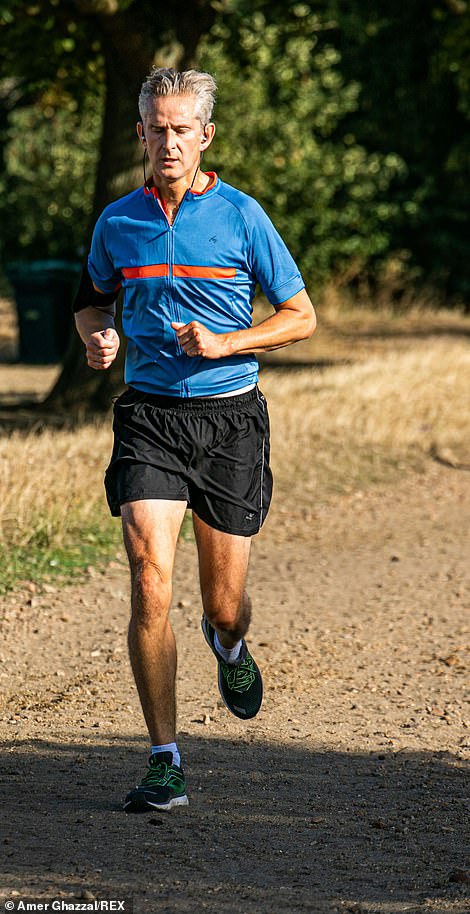 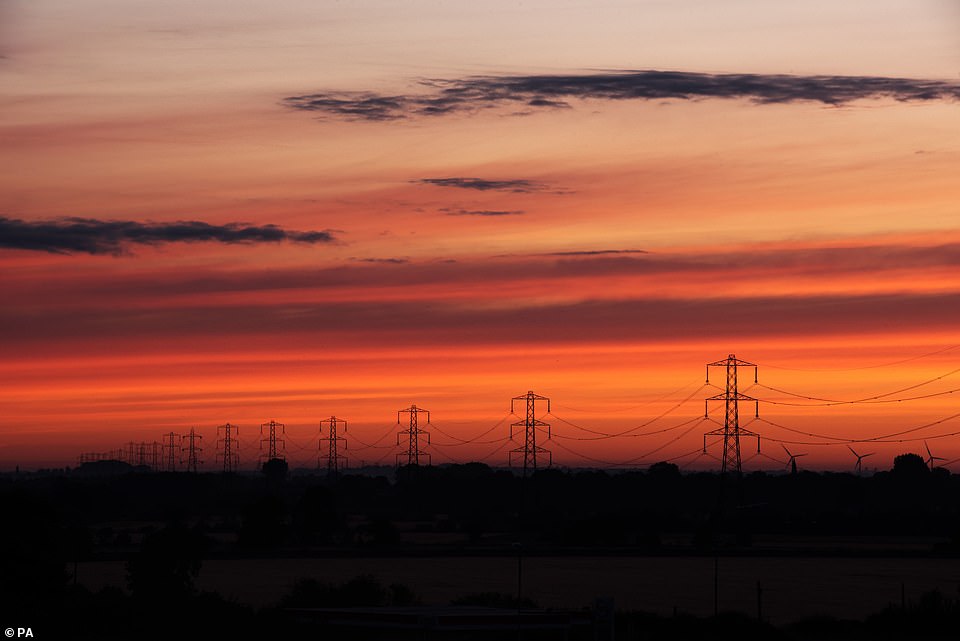 Dawn colours over electricity pylons at Bingham, in Nottinghamshire, with parts of the UK looking set for a scorching weekend 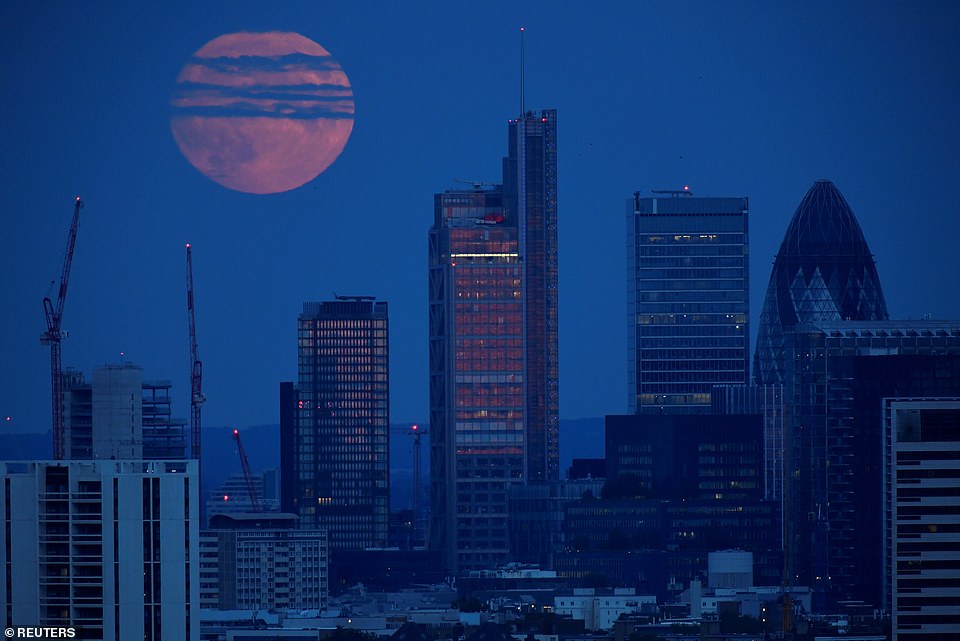 The night sky is lit up by the huge pink moon in London’s financial district in the UK on Sunday night. The sturgeon moon is known as the ‘grain moon’ in Britain 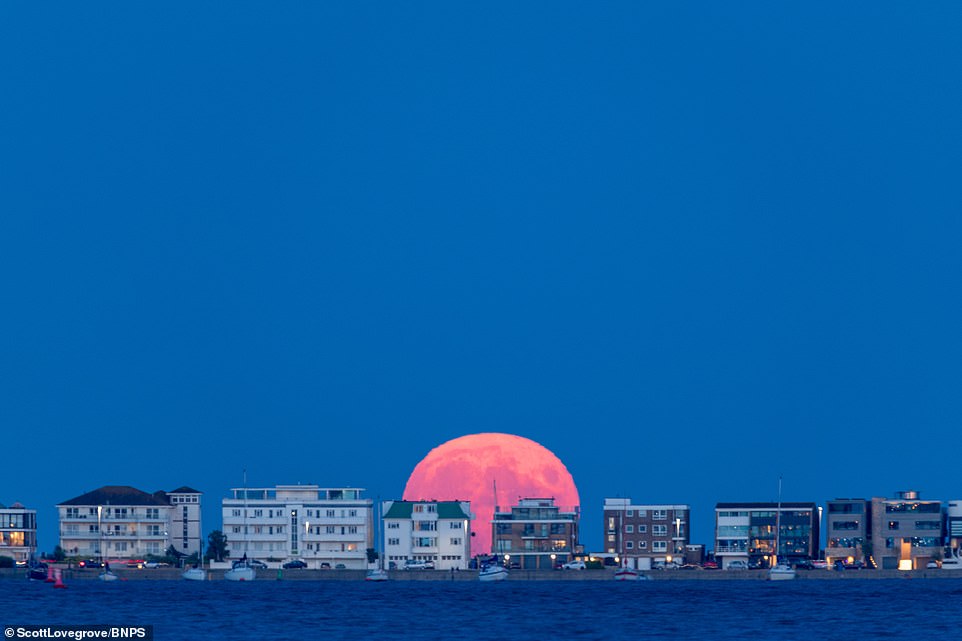 The ‘Sturgeon moon’ creeps up over the famous Millionaire’s Row at Sandbanks in Poole, Dorset, on Sunday night 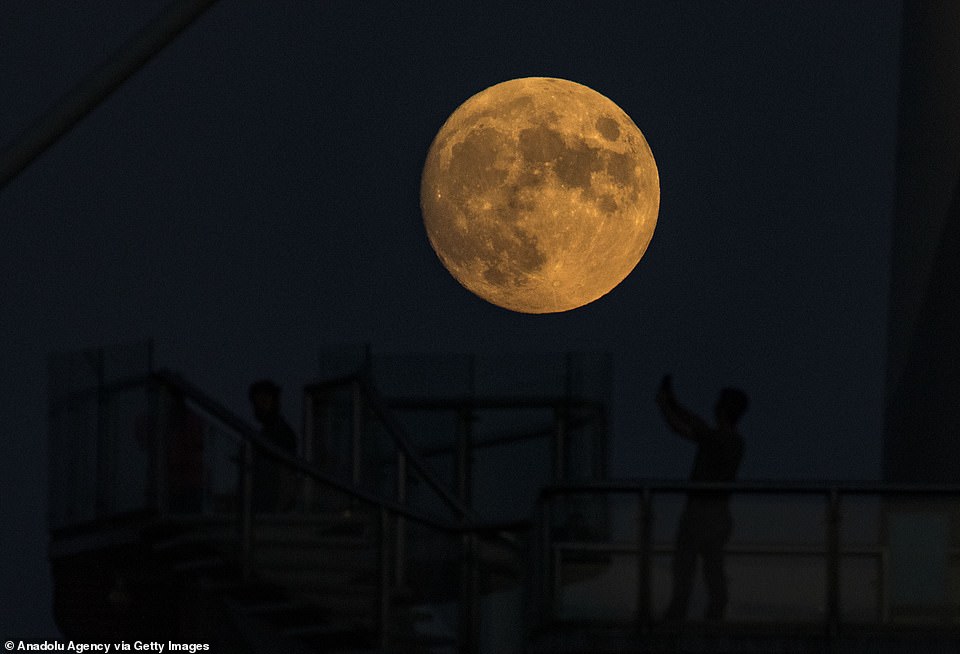 People take pictures of the giant pink moon in the night sky in Istanbul, Turkey, on Saturday night. The sturgeon moon takes its name from Native American folklore 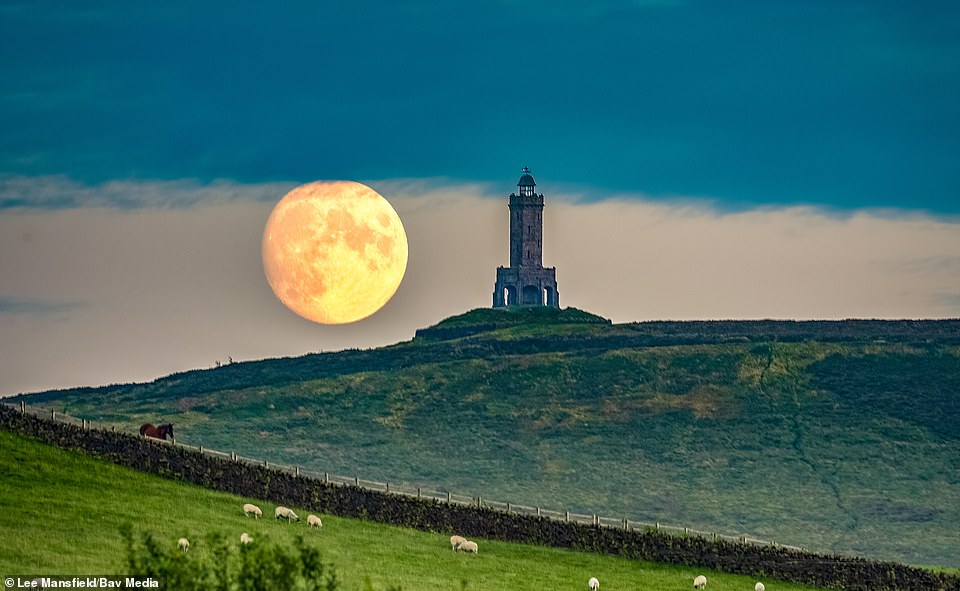 The giant sturgeon moon rises above the hills in Darwen, Lancashire, UK, to the side of the Jubilee Tower as horses and sheep frolic in the fields on Saturday night