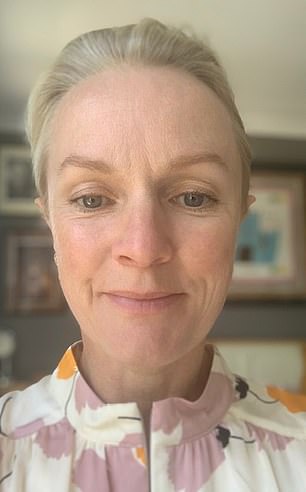 For many, feminism means not having to look ‘beautiful’.

But can you care about your appearance and be a feminist? Romance novelist Marian Keyes, 57, certainly thinks so.

She says: ‘The Botox is because I had such a frowny forehead and it made me look really cross and disapproving. It’s not anything I apologise for. I don’t feel like a bad feminist, I am a feminist living in a patriarchal society.’

So, can you be a feminist and have Botox? Here, five female writers give their views…

I’M NO LONGER A GRUMPY VERSION OF MYSELF 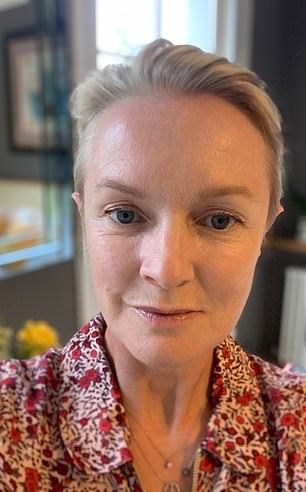 A few weeks ago, a woman, 20 years younger than me, complimented me on ‘looking good for my age’. I’m 52. I immediately told her about the ‘tweakment’ I’d had three weeks earlier — my first try of Botox. Pictured left: Lorraine Candy before Botox. Right: Lorraine Candy after Botox

I immediately told her about the ‘tweakment’ I’d had three weeks earlier — my first try of Botox. ‘Well, you’d never know,’ she whispered, in a conspiratorial tone. She obviously assumed I wanted to keep the Botox secret but, the fact is, I don’t care who knows.

I’m not ashamed or embarrassed about my trip to the dermatologist on September 15. I don’t have so-called ‘Botox guilt’ or, indeed, Botox prejudice. And I have no urge to justify the sudden absence of my scowl lines, I’m just glad my friends are no longer asking me what’s wrong all the time.

I like my new smooth forehead and proudly tell anyone who asks about it. I no longer look like a grumpy version of myself, I look like a fresher, less worn out me.

I look rested and calmer, which makes me feel rested and calmer — and that’s money well spent for a working woman in her 50s with four children (three of them teenagers), a badly behaved dog and a 20-year marriage to uphold.

I hated the deep ‘No 11’ wrinkles that had formed between my eyes and, as an insider in the beauty world, I knew no amount of expensive moisturiser, alcohol-free detoxes or fancy facials would rid me of them.

Feminism, for me, is about equality of the sexes, it’s not about shaming people for their beauty choices or implying they are ‘cheating’ for enhancing the way they look.

I’ve edited one glossy magazine or another for more than 30 years and witnessed all manner of treatments, so why had I not succumbed earlier? I’m so late to the Botox party the DJ’s packed up and gone home.

I wasn’t worried about what my face looked like until I got to my 50s, because you really don’t know how you are going to feel about ageing until you hit midlife.

During my 20s, with the arrogance of youth, I said I didn’t want kids; then I fell in love. In my 30s, I said I’d never do anything more drastic than dye my eyebrows but, as the collagen in my skin packed its bags and left, I began to feel differently. That unbending certainty of opinion which dominates each decade of a woman’s life is loosened during the great unravelling of midlife.

Nothing makes sense in your hormonal 40s and 50s, it is the Wild West of womanhood and all the truths you held true are questioned or rejected.

I decided to have Botox after interviewing authors Caitlin Moran and Marian Keyes, both enthusiastic advocates for it, for the podcast I co-host called Postcards From Midlife.

And I’m very much anti anyone telling me ‘I look good for my age’, or that I have ‘still got it’, as if ‘it’ is something I wanted in the first place.

I had my Botox done by dermatologist Dr Sam Bunting in London’s Harley Street. The five, quick, painless injections took under ten minutes and cost £325. It lasts around three months.

Women in their 20s tell me they get it done regularly and I can see that almost everyone on telly has had it (male and female). It doesn’t feel stiff and I can still move my forehead.

My husband has barely noticed. I fear happy wife, happy life is his midlife motto.

I don’t judge any woman’s choices, because it’s no one else’s business how other women want to see themselves in the mirror. Or who they want to tell about it; keep it a secret or don’t, it’s up to you. As my Gen Z daughters often say if I comment on another woman’s appearance: ‘Just let her do what she wants, Mum.’

Would I go further and try even more invasive treatments? I doubt it; I’m a bit of a wimp when it comes to pain.

But you can never say never, can you? Ultimately, I am not bothered by what other people think about the way I look any more, which is what growing up is all about. And, as Marian says: ‘Judge me if you will, but judge me with my smooth forehead.’

For me, being a feminist is being precisely the woman you want to be. And if that means taking care of the way you look — and possibly slowing down the ageing process — then so be it. Pictured: Helena Frith Powell, 53

For me, being a feminist is being precisely the woman you want to be. And if that means taking care of the way you look — and possibly slowing down the ageing process — then so be it. I don’t see anything anti-feminist in looking, well, feminine.

I have had Botox, threads inserted to ‘lift’ my knees, my own plasma reinjected into my face and the skin around my eyes heated to burning point in order to banish wrinkles.

At no point did I think they made me less of a feminist. Surely feminism is all about making the best of the woman you are, realising your potential. Why should that only apply to intellect?

Someone once told me former French presidential candidate Ségolène Royal wouldn’t win because her hair was a disaster. At the time, I thought they were joking. But it makes perfect sense that your appearance is a reflection of your state of mind.

Why should you ignore your appearance in the name of some outdated ideology that dictates that hairy armpits are akin to feminine empowerment?

People often wonder who women have these treatments for. Is it for my husband? Is it because I’m competitive with other women? Maybe a little of both. But the most satisfying thing is feeling happy when I look in the bathroom mirror. Just as I feel happy when I’ve written something I’m pleased with. Self-esteem is essential.

Why would I be letting womanhood down by doing something that makes me feel better about myself?

I CAN KICK PATRIARCHY – EVEN IN SIX INCH HEELS

I have been a feminist since I first learned the word, back when I was seven. Feminism is my life’s great cause, and the faith that I hold in place of a religion. 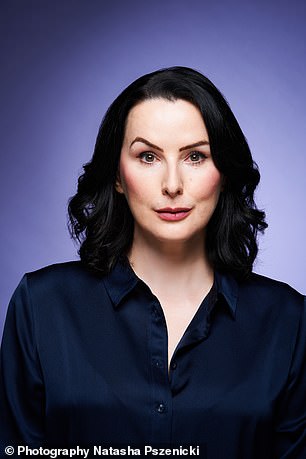 I have been a feminist since I first learned the word, back when I was seven. Feminism is my life’s great cause, and the faith that I hold in place of a religion. Pictured: Hannah Betts, 49

Like Marian Keyes I, too, have had the occasional spot of Botox and filler (thank you, Dr Prager). I apply the odd gloss to my locks (cheers, Josh Wood). Anyone who has met me knows that I come caked in slap, festooned with jewels, and gad about in towering heels; none of which compromise my stalwart feminist credentials.

I have never understood the notion that taking pleasure in grooming negates one’s ideological affiliations. I’m a feminist whatever I do, however I look, and to imagine otherwise is a ridiculous anachronism; a reduction of a global political movement to an outmodedly puritan stereotype.

Film star and feminist campaigner Emma Watson was trolled on Twitter for ‘superficial feminism’ when an organisation published a quote of hers to the effect that women are free to be Prime Minister, shave their armpits and wear high heels.

In fact, the line was taken out of context from a 2016 interview in which Watson went on to say: ‘These things are so irrelevant and surface to what it [feminism] is all really about, and I wish people wouldn’t get caught up in that.’ Hear, hear!

So what if I won’t leave the house without my 6in heels? It doesn’t stop me kicking the patriarchal system where it hurts.

BOTOX IS THE LEAST OF OUR WORRIES

At least once a week, I receive a cruel email informing me I am a disgrace to womankind.

My crime? That I dare to call myself a feminist while indulging in such frivolous pleasures as high heels, designer clothes and a decent haircut. In my critics’ eyes, caring about your appearance and holding feminist views are incompatible. That way of thinking is absurd.

As a staunch feminist, I’m perfectly comfortable with spending money on a gym membership and Pilates classes. I love clothes and heels and bags. I shell out cash on creams in order to prop up my 40-something face. And, if I had chosen to have Botox or fillers, I wouldn’t feel ashamed of it. 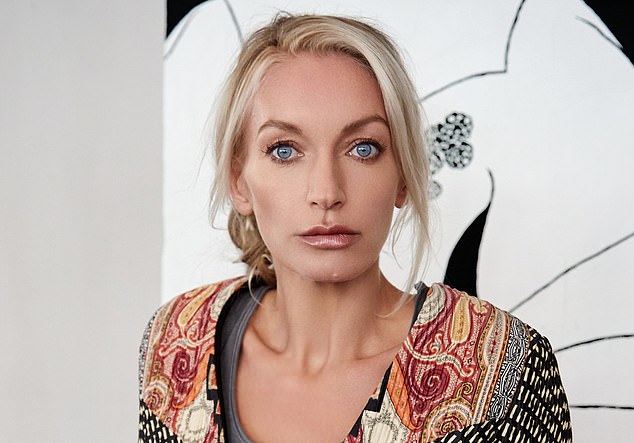 As a staunch feminist, I’m perfectly comfortable with spending money on a gym membership and Pilates classes. Pictured: Lisa Hilton, 45

Why are women constantly required to police their own intentions about the way they present themselves? Do we want to look nice or, whisper it, sexy for ourselves or other people? Dare we admit we might want to look attractive to men? Or impress other women?

Like most women my intentions vary from day to day.

Surely feminism is about giving women the choice to do — and dress — as they like? Why should it bother me if a woman chooses to go out barefaced in jeans and trainers, or in a dress and heels?

Here are some things that do concern me as a feminist. That 32 per cent of girls in Yemen are married before their 18th birthdays. That six U.S. states have only one abortion provider between them. That 88 rapes are reported every day by women in India.

Quite frankly, feminism has bigger things to worry about than Botox.

If feminism means anything, it’s the right for a woman to do what she wants with her own body. But ladies, please don’t pretend that injecting poison into your face to look younger is about female empowerment. It isn’t. 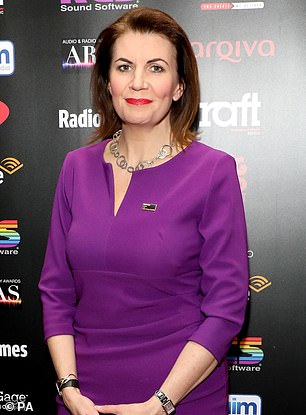 Ladies, please don’t pretend that injecting poison into your face to look younger is about female empowerment. It isn’t. Pictured: Julia Hartley-Brewer, 52

I’m all for making the best of what you’ve got. I watch my weight, work out regularly, wear make-up and, yes, I touch up those grey roots. But injecting a toxin into my forehead is a line I won’t cross.

It’s become so normalised that even my own dentist suggested that he thought I should get Botox on my ‘problem’ forehead. Suffice to say, he is no longer my dentist.

So many women these days seem to think feminism is about flaunting their chemically and surgically enhanced naked bodies as a way of celebrating their body confidence.

Feminism is about women refusing to become invisible just because their bodies aren’t youthful any more. We are the sum of the lives we have lived, and our unBotoxed faces tell a thousand stories about all we have experienced and, yes, how many years we have spent on this planet.

So why, in your fabulous 50s, would any woman — let alone a successful author such as Marian — want to pretend to be a book full of blank pages?