By Christopher Stevens for the Daily Mail

This is a harsh truth that many will find hard to swallow, in an age when we’re all told life owes us the right to be happy and fulfilled.

But that fact is, lots of people don’t end up in the jobs they were born to do. Look at Andy, a rat-catcher for Southwark Council. He wanted to be a rock star, and he’ll still do a song-and-dance routine if he spots a camera.

At least Andy enjoys his work. Maybe it’s a rock star trait… I should imagine Keith Richards might also get satisfaction from an afternoon spent wiping out a cockroach infestation. Andy, a rat-catcher for Southwark Council, wanted to be a rock star… and he’ll still do a song-and-dance routine if he spots a camera

Not so Lauren, Andy’s young apprentice, on Council House Britain (C4). She’s petrified of rodents, and insects make her skin crawl. Just the smell of those cockroaches left her retching. Full marks to Lauren for trying, but you can’t help thinking her careers adviser must have been having an off day.

And when housing officer Charmain was asked whether it was always her dream to work for a local authority, she couldn’t answer the question for laughing.

This six-part series has no great ambitions either.

Some flats on their estates, currently rented to tenants for £80 a week, could fetch seven-figure sums on the open market.

Russian billionaires would buy them by the block as investments.

The fourth-floor apartment let by Stacey Braidwood has a view of the Shard that any oligarch might kill for. If window cleaner Stacey could sell it, he’d be a millionaire.

As it is, Stacey (he says his dad wanted a girl) has lost his front door key, and is entering and leaving his property by the roof and the sitting-room window . . . above a 30ft drop onto concrete.

Russian business negotiations do sometimes end with one party exiting via a high window, but it’s unusual for victims to take the initiative themselves.

Stacey and Andy were happy to play up for the film-makers. But there was something deeply distasteful about the way this documentary pawed through a hoarder’s house, grimacing as the contract cleaners bagged heaps of junk, after the tenant had died. We even eavesdropped on the poor woman’s funeral. 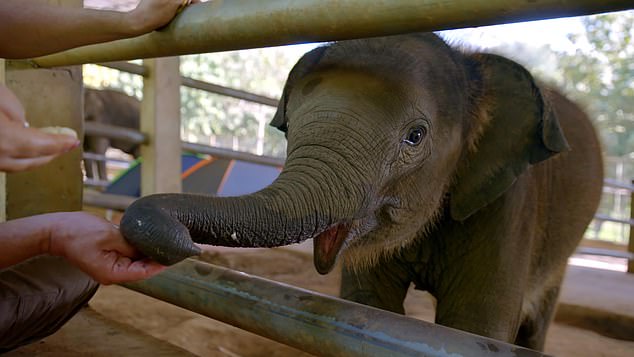 Elephant Hospital, a series about a medical centre for Thailand’s biggest and best-loved animals, could have been charming

Her last years and her death must have been wretched: she didn’t have the chance to say whether she wanted it all on display, and the council had no right to make that decision for her.

Several scenes in Elephant Hospital (C5) were surprisingly distasteful too. Certainly, they would turn the stomach of queasy Lauren. This series about a medical centre for Thailand’s biggest and best-loved animals could have been charming.

If it had copied the recent example of conservationist Giles Clark’s BBC2 documentary about the illegal trafficking of bears in neighbouring Laos, it might have been a powerful and significant film. Instead, it was puerile and prurient.

Elephants do big wees, don’t you know? And elephant dung is smelly.

The only way to take a baby elephant’s temperature is by lifting its tail and plunging a thermometer in, elbow-deep.

We saw all this repeatedly. By the end of the hour, I was convinced there must be an 11-year-old behind the camera.

Logging with elephants was banned in Thailand 30 years ago, and some of the creatures involved are still alive.

This show had the opportunity to make a vital statement about animal welfare, and it wasted that.