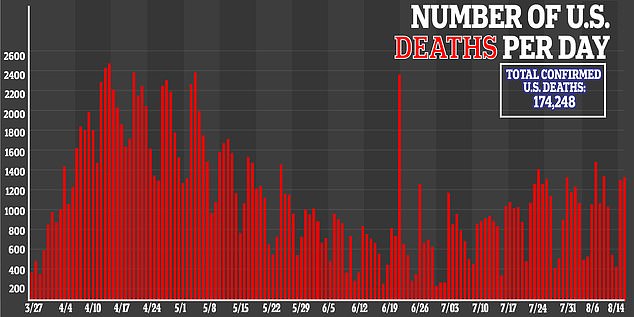 Coronavirus deaths in the United States will hopefully start dropping by next week, according to CDC director Robert Redfield.

Deaths across the country have been plateauing for the last three weeks with an average of 1,000 Americans dying per day. The average number of deaths was 1,027 on Thursday.

The number of cases, however, have been declining steadily for a month.

The average number of COVID-19 cases across the country per day was at about 46,000 on Thursday, which is the lowest it has been in two months.

The current daily case average is down considerably from the record high of 77,000 cases reported on a single day back in mid-July.

Deaths are a lagging indicator and can potentially rise several weeks after new cases start to decline.

Deaths across the US have been plateauing for three weeks with an average of 1,000 Americans dying per day 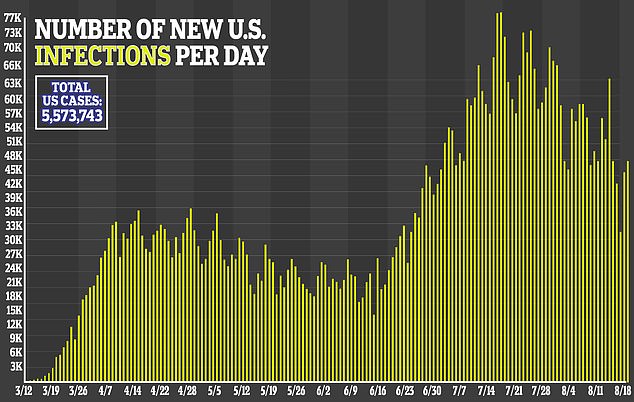 The average number of COVID-19 cases across the country per day was at about 46,000 on Thursday, which is the lowest it has been in two months

The current daily death rate, while still high, remains below levels seen back in April when 2,000 people a day, on average, were dying from COVID-19.

‘Hopefully this week and next week you’re going to start seeing the death rate really start to drop,’ Redfield said in an interview with the Journal of the American Medical Association on Thursday. 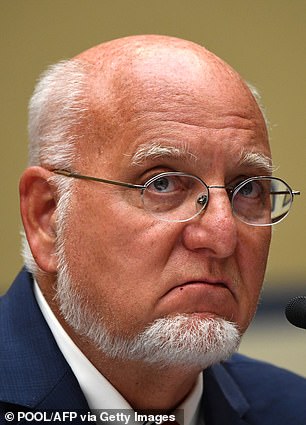 He said it was a direct result of mitigation measures, including mask wearing and closing down bars.

Redfield said it can often take weeks before the effects of those measures are reflected in the daily numbers due to the lag between deaths and positive tests.

‘It is important to understand these interventions are going to have a lag, that lag is going to be three to four weeks,’ he said.

Redfield noted that the southern states, which have been the hardest hit amid the pandemic, are seeing a progressive drop in cases.

He warned, however, that data from 21 US states showed there was yet to be a drop in cases for states including Nebraska and Oklahoma.

‘Middle America right now is getting stuck,’ he said.

‘We don’t need to have a third wave in the heartland right now. We need to prevent that.’

Coronavirus infections in the US have now topped 5.5 million and more than 174,000 have died of COVID-19 since the pandemic started. 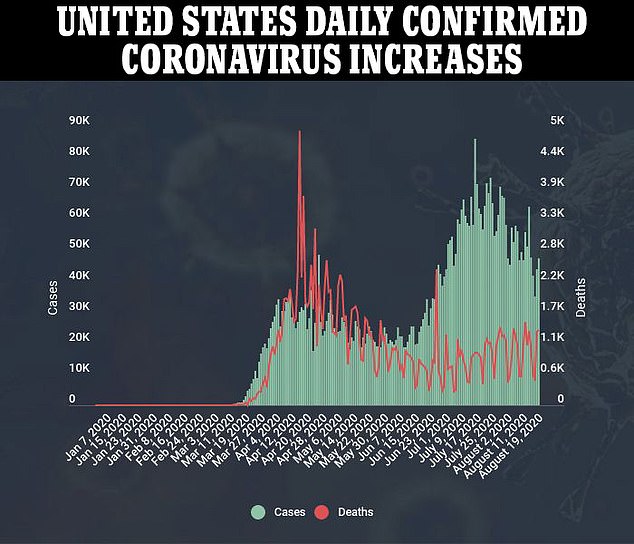 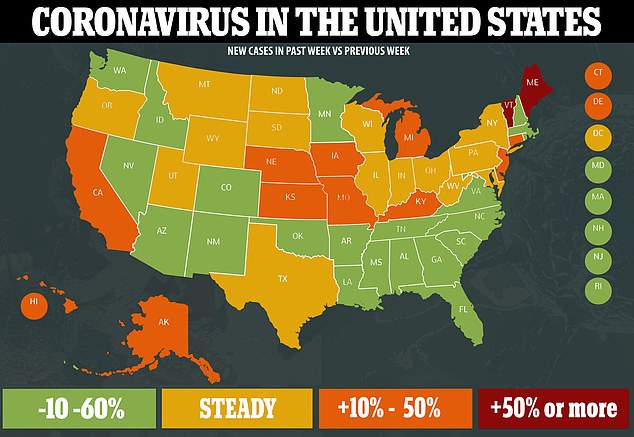 It comes as former FDA commissioner Dr Scott Gottlieb warned that the US would have a third act of COVID-19 during the fall and it will likely be ‘more pervasive’.

Gottlieb told CNBC’s Squawk Box on Friday that even though the US saw a summer surge of infections across the Sunbelt states, he said the country is yet to see a ‘true second wave’ of COVID-19.

‘I think most peoples’ perception is we had one epidemic in New York… we came down the epidemic curve, we had another epidemic in the Sun Belt. That really looks like and feels like a second wave,’ he said.

‘I do think that we’re going to have a third act of this virus in the fall and the winter and it’s likely to be more pervasive spread in a broader part of the country.’

He predicted the the virus would spread among rural areas that have, so far, been ‘largely unaffected’.

Gottlieb added that cases are starting to build in the West and Midwest after surging throughout June and July across the Sunbelt.

‘Every community is vulnerable,’ he said. ‘Really, an outbreak can happen anywhere.’