Judges have condemned France for its ‘degrading and inhumane’ treatment of refugees in a scathing landmark ruling.

The European Court of Human Rights (ECHR) said the French authorities ‘had failed in their duties’ to support those who applied for asylum in the country, leaving them to sleep rough on the streets for months in ‘constant fear of being attacked or robbed’.

Its criticism came after three asylum-seekers accused the French government of failing to uphold its own domestic law which requires the state to provide basic necessities such as food and shelter while refugees await a decision on their asylum application.

The ECHR ordered the French government to pay a total of £32,000 in compensation to the three men.

News of the ruling comes as British and French charities accuse police in Calais of meting out violence to migrants, with the assaults said to be another factor persuading them to make the perilous journey across the Channel.

The police have also been accused of attacking migrants on the streets, and videos posted on social media appear to show officers dragging migrants off buses.

Tensions grew to such an extent that a group of Eritrean refugees wrote an open letter listing eight alleged examples of violence by officers, including assaults that left migrants with broken limbs.

The ECHR case involved a Russian, an Afghan and an Iranian journalist who had to wait up to eight months before the French authorities acknowledged that they had lodged asylum applications.

Without such a formal acknowledgement, the men, who were not identified by the court, could not apply for housing or welfare payments and were at constant risk of deportation.

Judges heard how the Iranian, 46, slept rough on the streets of Paris for six months before being granted refugee status.

The Afghan, 27, slept under canal bridges in the capital for around eight months before he was finally granted access to shelter and a benefit known as ‘temporary allowance’.

The 30-year-old Russian slept rough in the South-West French town of Carcassonne for six months. Each of the men were forced to survive on handouts from charities.

In a blunt judgment, the ECHR ruled the ‘French authorities had failed in their duties towards the applicants’ under domestic law.

‘They had to be held responsible for the conditions in which the applicants had been living for several months: sleeping rough, without access to sanitary facilities, having no means of subsistence and constantly in fear of being attacked or robbed… 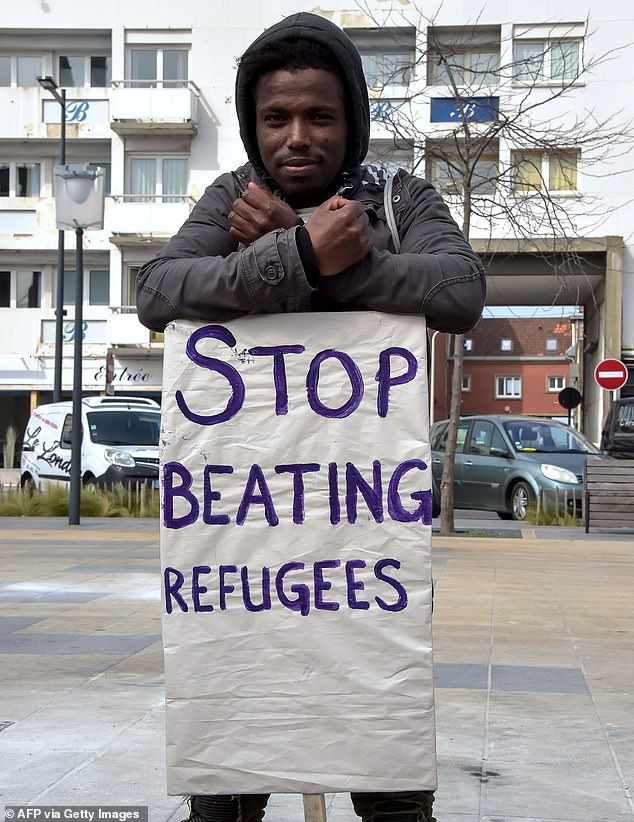 Man poses with placard as he attends a gathering called by migrant aid collective Appel d’Air to protest against administrative policies on migrants, which they claim translates into daily evacuatons of migrant camps and rising police brutality

‘The applicants had thus been victims of degrading treatment, showing a lack of respect for their dignity. It had aroused in them feelings of fear, anxiety and inferiority, likely to cause despair.’

It is not the first time that the ECHR has slammed the French government’s treatment of asylum seekers. Last February, judges ordered it to pay almost £15,000 to an Afghan migrant who, as a 12-year-old, had lived alone in a makeshift migrant camp in Calais.

French police have gradually stepped up efforts to clear migrant camps. Charities say that around 2,000 people live in either the Jungle camp in Calais, or in GrandeSynthe, an area outside Dunkirk, at any time.

The camps are used as a staging post for gangs to smuggle people to the UK in the back of trucks or in small boatss.

Poppy Cleary, a British aid coordinator with the charity L’Auberge des Migrants, said French police had doubled their raids on refugee camps in Calais in recent weeks. She claimed tents were destroyed and belongings, including clothes and medicines, confiscated.

‘They then bus the migrants out of Calais then leave them there, so they have to make their own way back,’ she alleged. ‘The police treatment is another factor why so many migrants are making the journey across the Channel.’

In one incident, two men, apparently African migrants, were filmed being dragged off buses in Calais by the police.

And in their letter, the Eritrean migrants said that the CRS [riot police] ‘don’t think we are humans… they started threatening our lives by beating us every time they get a chance’.

Last night, the French police in Calais and the French embassy in London were unavailable for comment.

But Calais MP Pierre-Henri Dumont defended the police and said ‘there is no link between the dismantlement and the crossings’, which he attributed to it being ‘easier for migrants to live clandestinely in the UK, to work and find a place to live, than in France.’