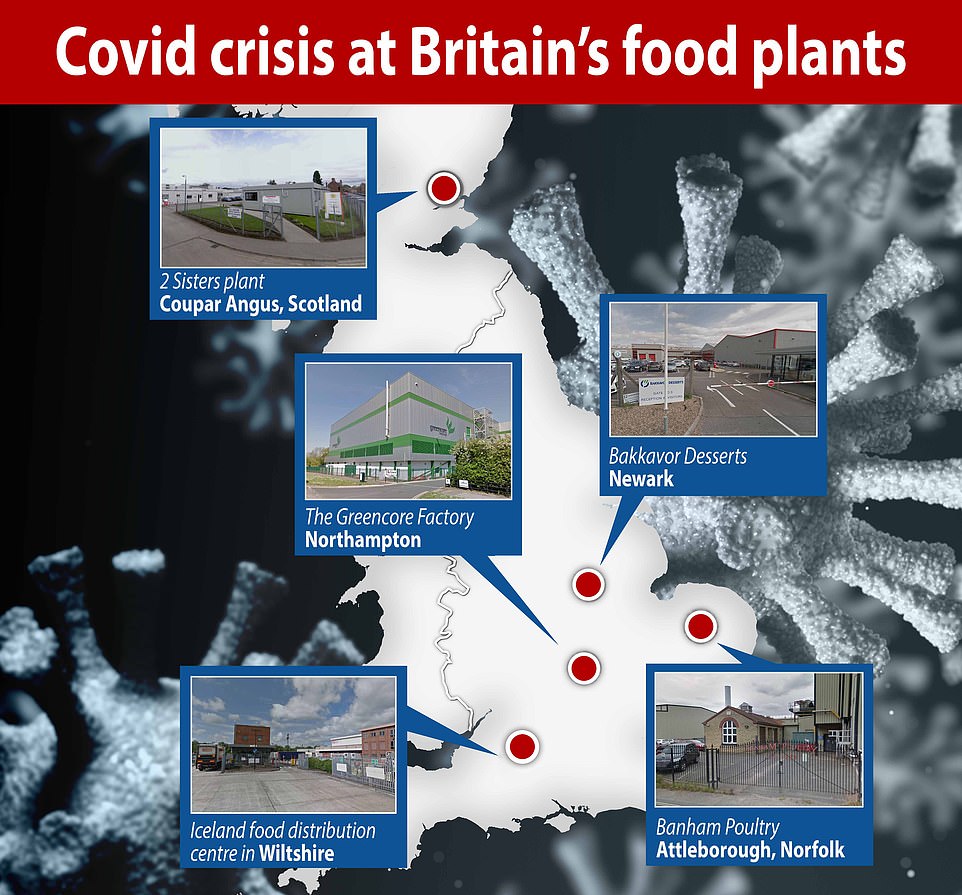 A coronvirus crisis has hit Britain’s food plants after the head of the Food Standards Agency revealed that there are 40 active outbreaks in factories in England alone.

Dr Colin Sullivan, Chief Operating Officer at the FSA, admitted the figure is not comprehensive, and may be higher, but said: ‘The number that I mentioned, was one we are content to make public. It is a small number of a big total.’

A huge chicken factory in Norfolk is the latest plant forced to close with 350 families put into isolation after 75 workers tested positive for coronavirus.

Banham Poultry in the village of Attleborough voluntarily agreed to close its cutting room following an outbreak of the virus.

The first case of Covid was reported last Friday, when one worker said they felt unwell. By Monday, seven out of 15 tested were found to have the virus.

Almost 400 workers have now been tested, though officials claim that any potential geographical spread of the virus from Banham Poultry is low.

The outbreak has however sparked fears that Norfolk will be plunged back into a local lockdown – with the county the subject of a government review later today.

It is the latest food processing facility in Britain forced to close after an outbreak of coronavirus cases.

In recent days, Greencore, which manufactures own-label sandwiches for Marks & Spencer, announced a temporary closure of its Northampton plant. This came amid an increase in community transmission in the area and after 292 staff tested positive for the virus earlier in the week.

Irate customers have reported a shortage of sandwiches since the plant’s closure, taking to social media to express their frustrations. Sandwich aisles at some M&S stores also appear to have been covered up.

Other major food producers, such as Cranswick and 2 Sisters Food Group, have also closed plants following a surge in cases among staff.

Experts have suggested the cold conditions inside the plants may be conducive to the spread of the virus: 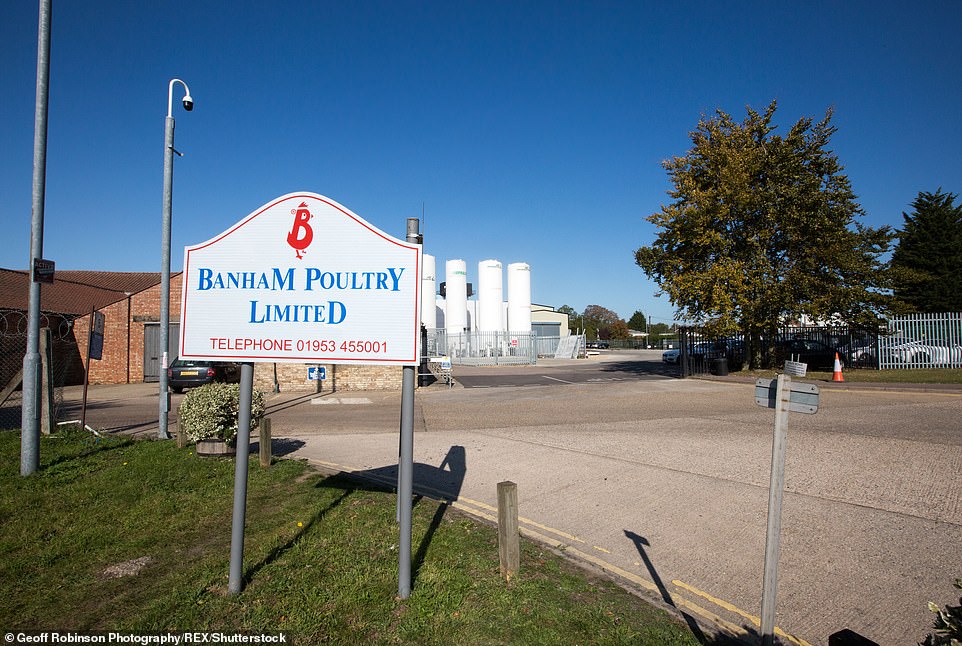 Scotland, Wales and Northern Ireland have also been hit with the number of positive Covid-19 cases linked to a chicken processing plant run by 2 Sisters in Coupar Angus, Scotland, passing well over 100.

Dr Sullivan, is a member of a taskforce set up by the food and farming department, DEFRA, which also includes Public Health England (PHE) and the Health & Safety Executive. (HSE)

He argued the figure of 40 active outbreaks in England should be seen as small when set against the total number of food processing plants.

Why meat factories are becoming a hotbed for coronavirus outbreaks

The virus thrives in cold, damp and indoor environments, particularly on cool surfaces.

The lack of a breeze or ultraviolet light from the sun means the moisture remains and can’t be killed off inside food processing plants.

Furthermore, social distancing is particularly difficult in workplaces with a busy production line meaning the virus is likely to spread more easily.

Loud machinery also forces people to raise their voices and researchers say situations where people have to shout result in an increased risk of projecting the virus to others.

It’s not just in the UK where a trend has been seen, either, after hundreds tested positive in a Berlin slaughterhouse, while a wet market in Wuhan is believed to have been at the heart of a huge number of infections early on in the crisis.

He told the board: ‘To put the figures in context, across England, Wales and Northern Ireland there are more than 20,000 food processing plants. Only a very small number have been impacted.

‘We are always going to have a number of these as long as Covid is present, given the many factors that are present in food processing plants; the conditions, the aerosol issues, the way people work close by each other, the fact that staff in plants sometimes live together, sometimes travel together. All those issues need to be managed.

‘Some of these – outbreaks – will be higher profile than others and with improved testing and apps coming on, one hopes the numbers will reduce.’

The FSA’s chief executive, Emily Miles, stressed there is no need for alarm, saying: ‘The risk of transmission of Covid-19 through the consumption or handling of food, or food packaging, remains very low.

‘There have been a small number of Covid 19 outbreaks associated with meat and food processing places and we have been supporting the Health & Safety Executive, Public Health England, Public Health Wales and other bodies in their work to deal with those.’

She added: ‘The FSA has to be here to tell the truth about food. People need to be able to turn to us and get the facts about food and Covid 19. The risk assessment led by our very brilliant scientists, who have been assessing and re-assessing the evidence that we are learning about Covid 19 is saying that the risk is extremely low.’

The latest outbreak in Norfolk has driven fears of a local lockdown in the area, despite Dr Louise Smith, director of Public Health England in Norfolk, ruling one out.

‘We do not anticipate the need for a geographical or town-based lockdown at this stage and we would only move to that kind of measure if we were getting evidence of spread in the general public that could not be linked to a specific location, such as this outbreak.

‘We are not at that level at this stage and the background level of infection in Norfolk outside of this outbreak is low.’

However, the Government could decide in its review today to overrule local chiefs and shut the chicken factory completely. 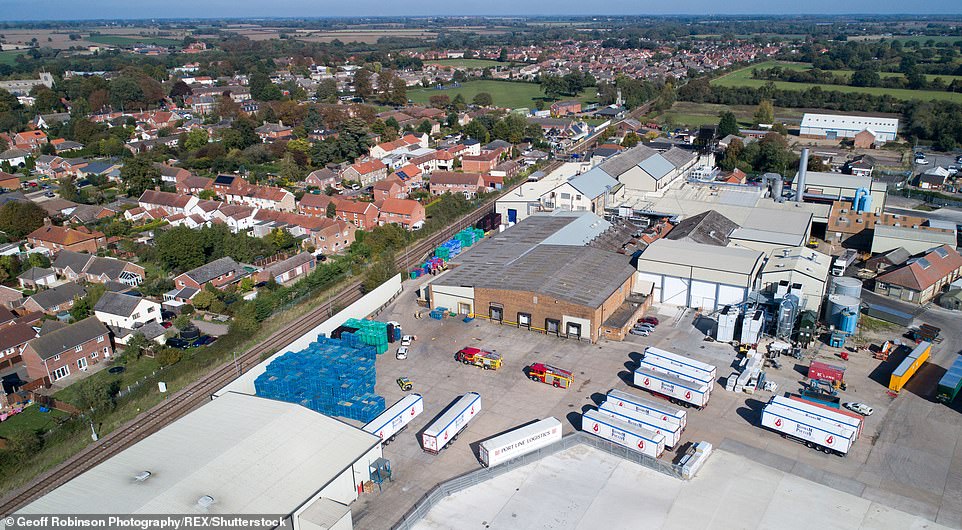 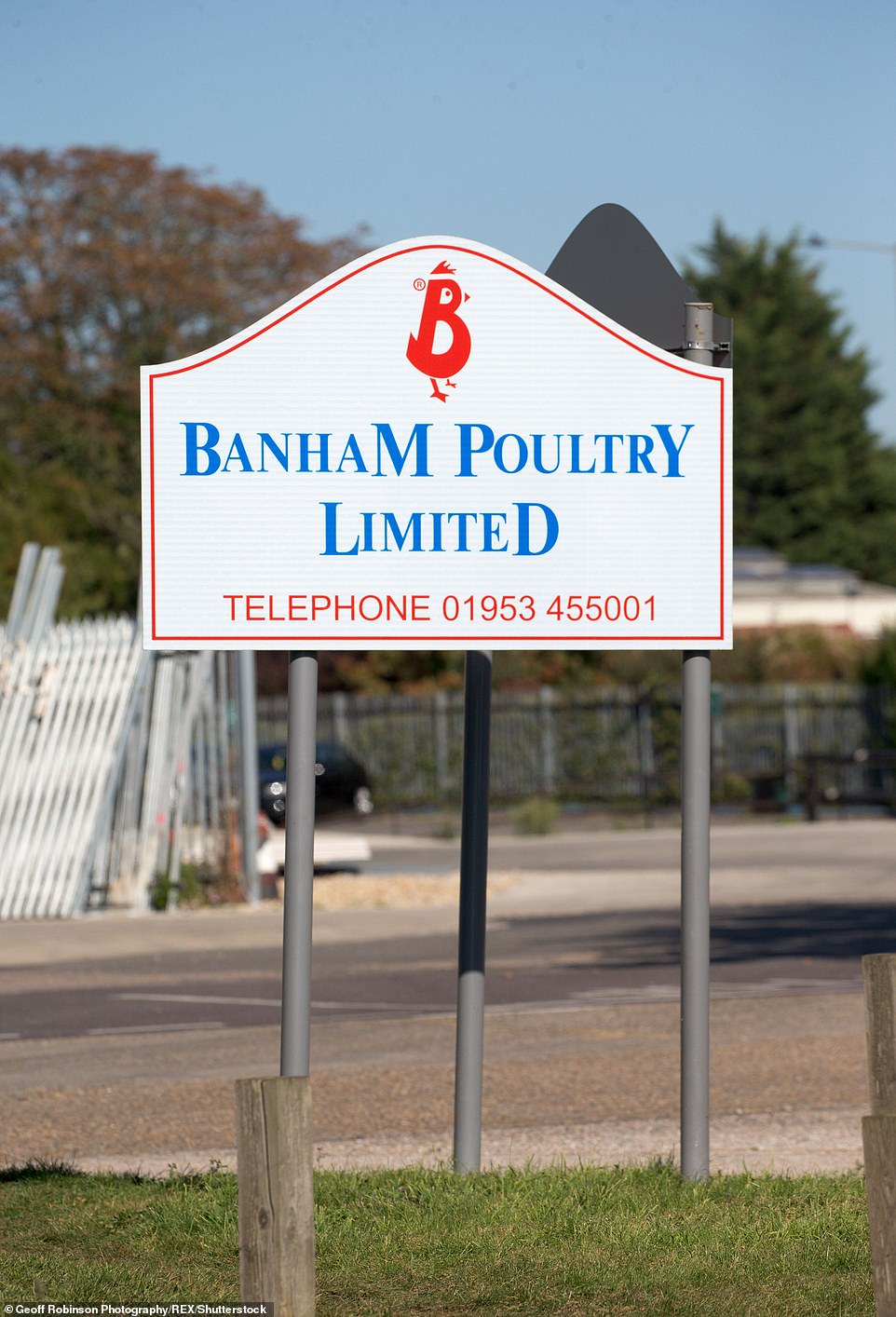 Dr Louise Smith, director of Public Health England in Norfolk, told the Eastern Daily Press that she was ruling out an immediate local lockdown in the county

Norfolk County Council is understood to be considering whether they need to speak with other meat factories in the county.

‘The safety of our staff, customers and the wider public is really important to us and we are working with public health authorities to make sure we are doing absolutely everything we can and following all of the correct procedures,’ he said.

Norfolk County Council, which sent letters to 450,000 Norfolk homes just last week reminding people that coronavirus was ‘still with us’, urged people concerned about contracting the virus is to ‘remember the basics’.

Up to 30 teenagers in Plymouth could be infected with coronavirus after returning from a holiday in Greece, the city’s council confirmed.

Plymouth’s public health team is dealing with a coronavirus outbreak that could involve up to 30 young people who returned from the Greek island Zante last week.

At least 11 members of the group, all around the ages of 18 and 19, have tested positive for the virus since returning from Greece, Plymouth City Council confirmed.

Greece is not currently included on the list of countries subject to the UK’s quarantine restrictions.

Steve Morphew, leader of the opposition Labour group at Norfolk County Council, said: ‘This outbreak shows the critical importance of making sure we learn the lessons and ensure there are enough resources to respond swiftly.

‘We know delays are costly in every sense so we must make sure our public health team can do the job we need from them. ‘

Attleborough mayor Philip Leslie said he had expected to see an increase in confirmed cases, but moved to reassure the town’s residents.

He said: ‘They have tested all 300 staff which I think has been exceptional – we are very grateful for public health England, their quick response and the way they have escalated resources to tackle it. However, it will raise eyebrows within the community to see such a large number of confirmed cases.

‘So the main thing for us as a town council, is to keep on top of the situation and reassure that residents it seems to be isolated at Banham Poultry alone.

‘We will remain vigilant and keep following government guidance. But we also need to have good practice within our homes as well.

‘People are becoming a little lax and don’t follow rules in their own homes.

‘We need to work hard at recognising that this is still a real issue.

‘We don’t have the vaccine in place yet or the long-term solution so we need to treat it as seriously we did a few months ago. We as a community are keeping our ears to the ground and ready to act on advice that comes.’

As news has emerged of food factories around the world experiencing outbreaks of Covid-19, experts have suggested conditions inside the plants may be conducive to the spread of the virus. 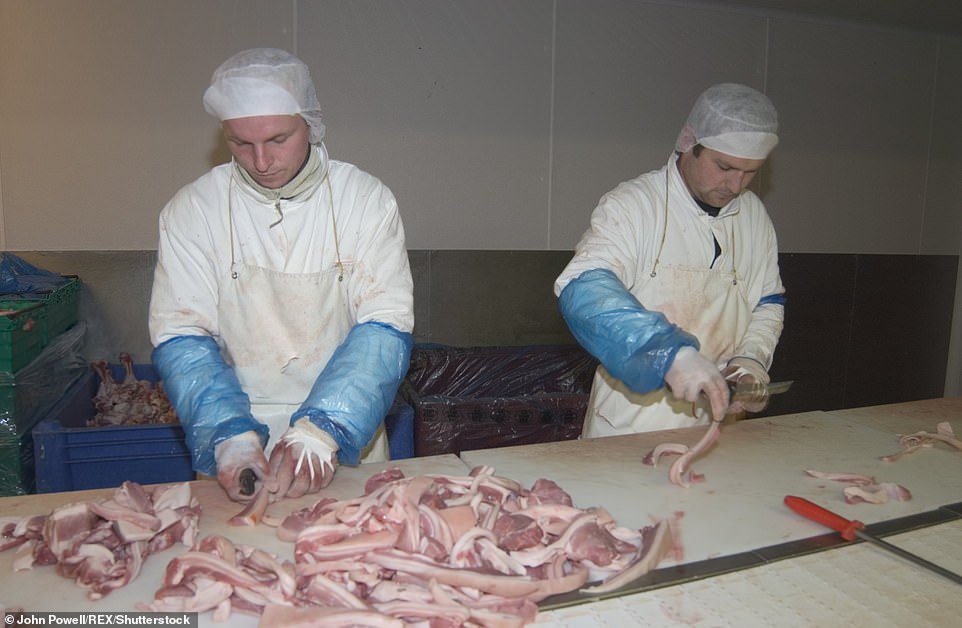 Workers at a meat processing plant (stock image). Dr Sullivan added there was some evidence that food processing plants could be more susceptibly to outbreaks of the disease 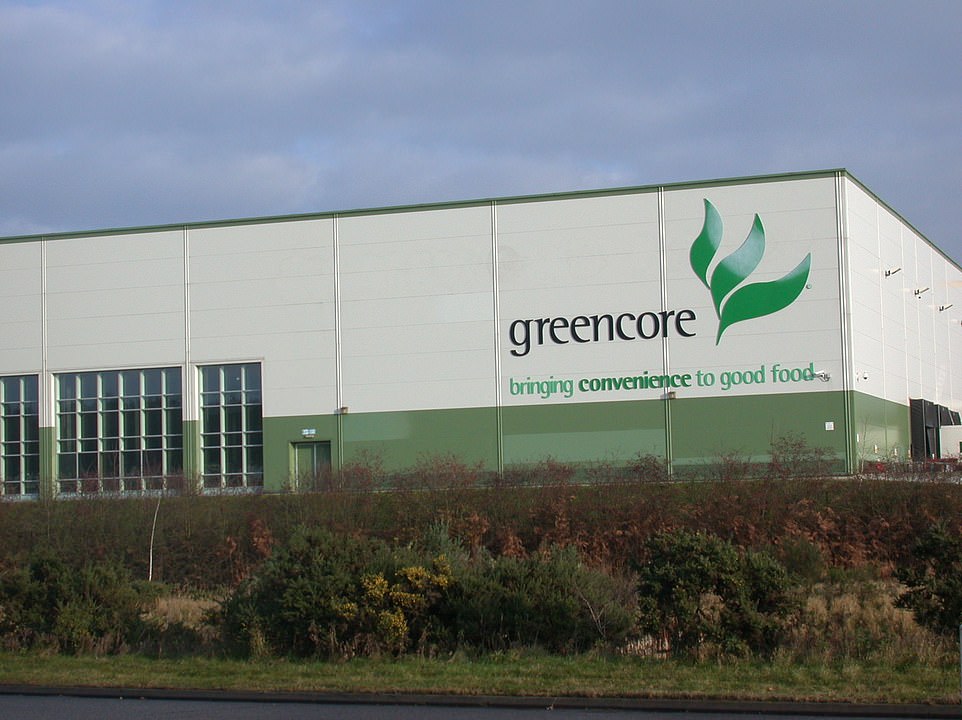 Dr Simon Clarke, a cellular microbiologist at the University of Reading, told MailOnline that it was notable that food factories seemed to have been the centre of outbreaks more than other factories where people might be close together.

He said: ‘There are problems in this country, in Germany, in the United States. There is something common between them – it’s not happening in engineering or clothing factories where you also might expect people to be in close proximity to one another.

‘One assumes – but it’s just an idea – that the cold environment makes people more susceptible to the virus.

Dr Chris Smith, a virologist at the University of Cambridge, said on LBC ‘temperature is going to play a part’.

He explained: ‘When I’m breathing I’m blowing out droplets of moisture from my respiratory tract and the virus which is growing in there would be packaged up in the droplets. 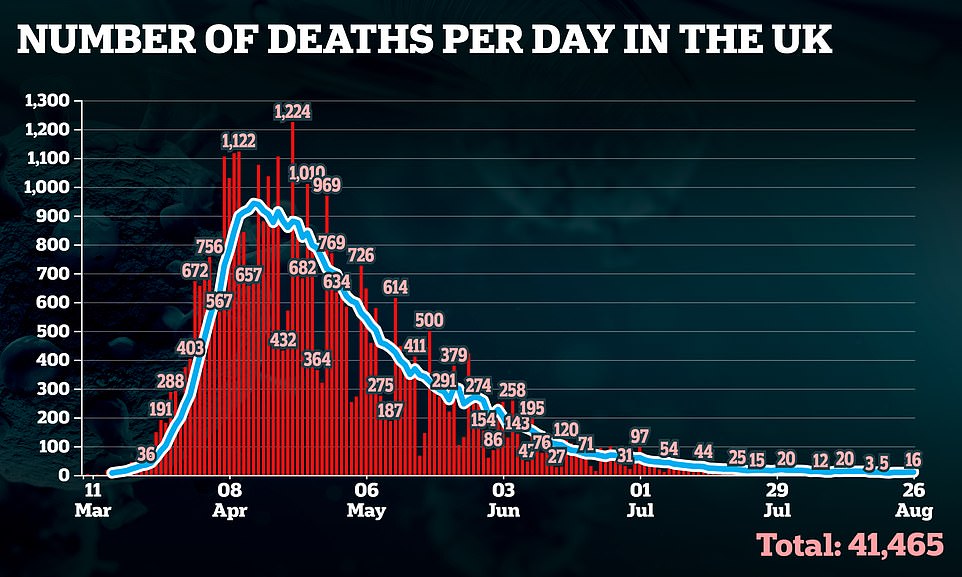 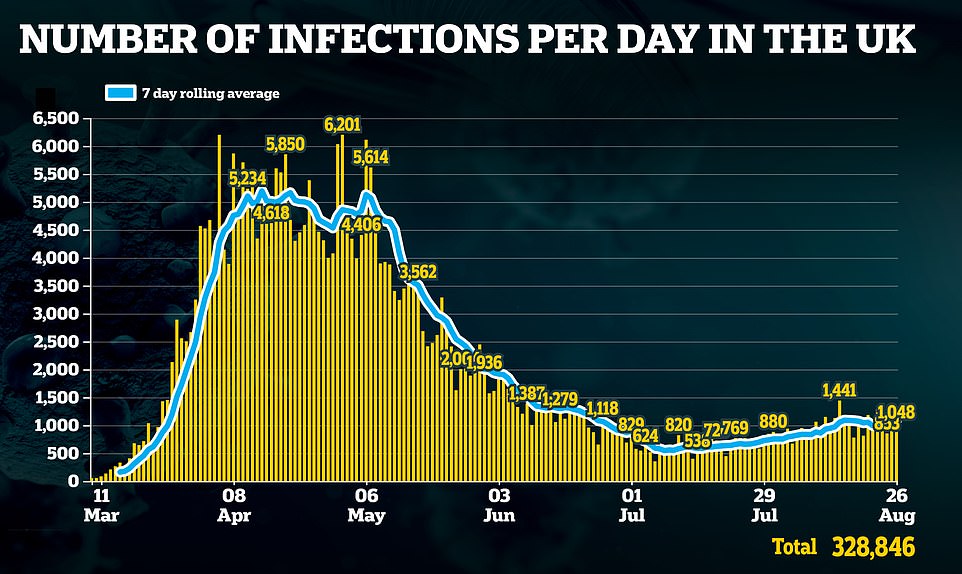 ‘Now the droplets will hover for a period of time in the air and then sink to the ground… and if it’s very dry, cold air – and cold air carries less moisture, remember – the droplets will stay smaller and stay airborne for longer.

‘If it’s very humid, moisture joins them, makes them bigger and heavier, and they fall and they drop out of circulation faster – so temperature could be a factor.’

Sunlight is also known to degrade viruses and make them less able to survive on surfaces that are exposed to UV light.

Rays of sunlight are thought to damage the genetic material inside the virus, making it less able to reproduce and killing it faster.

Professor Calum Semple, a disease outbreak expert at the University of Liverpool, told The Telegraph that cold, sunless food factories are ideal conditions.

He said: ‘If I wanted to preserve a virus I would put it in a cold, dark environment or a cool environment that doesn’t have any ultraviolet light – essentially a fridge or a meat processing facility…

‘The perfect place to keep a virus alive for a long time is a cold place without sunlight.’

But the temperature alone does not appear to be a controlling factor in coronavirus outbreaks.

Dr Michael Head, a global health researcher at the University of Southampton, said he thought close proximity was most likely to be behind the factory outbreaks.

He said: ‘Whilst refrigeration may be a contributory factor to the spread of the virus, the key factors are likely to be the number of people close together in indoor conditions.

‘Some of these factories have onsite or nearby accommodation where there are several people in each dormitory, they may be transported on a bus to the site of work, and they will be indoors together all day.

‘Levels of adherence to measures such as washing hands is uncertain and there is unlikely to be widespread use of PPE.’