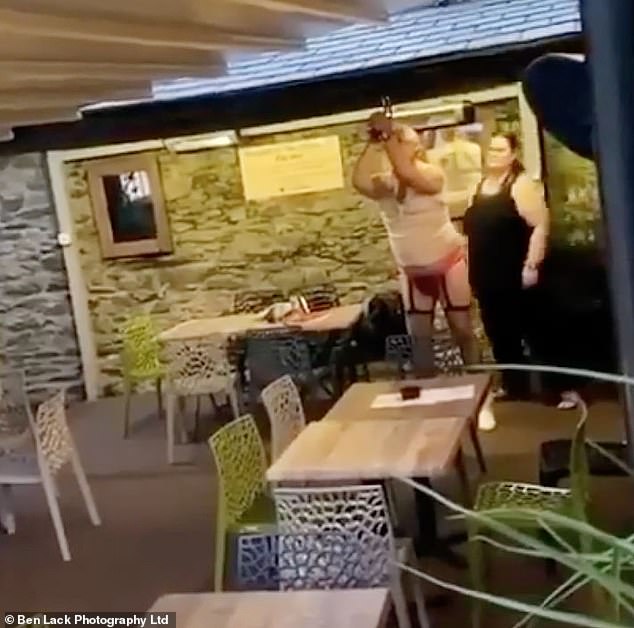 Customers who witnessed the sadomasochistic session filmed the bizarre episode and shared it online.

But Lydia defended her actions, telling The Sun: ‘People should get out of the dark ages and accept this sort of behaviour.

‘Most people are just treating it as a laugh.’

Lydia added that she had taken a friend from Camden, who identifies as a woman, into the pub because she wanted to be publicly humiliated.

She said: ‘She said she wanted to be publicly humiliated so I was going to take her to a local beauty spot where the walkers go.

‘We thought we would give them something to laugh at. I did that for another customer before the lockdown.

‘But we were running out of time and decided to go for a drink in The Mill.

‘I was going to walk her on a dog lead, but she got embarrassed with everyone looking at us.

‘We signed in and went to the roof terrace, where I chained her to the rafters.

‘I blindfolded her and pretended to walk away and leave her as part of the humiliation. I was videoing it and we didn’t think anyone else could see.’

In the video, the sound of the spanking could be heard above the soundtrack of Lovely Day by Bill Withers.

The ‘slave’ was dressed in black fishnet stocking and suspenders and red knickers, while the mistress wore a black dress as she beat his bottom with a black paddle. 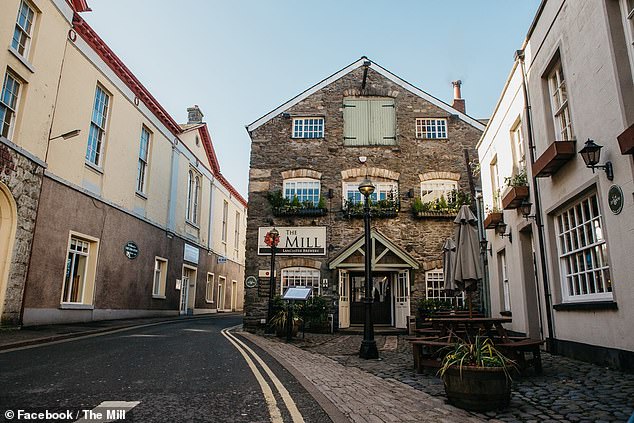 Phil Simpson, owner of The Mill (above), hit out at the couple, who he believes has ties to the Ulverston area, for seeking to ’embarrass small local businesses’

But the owner of The Mill has slammed the couple for their exhibitionism after the X-rated incident and barred them from the pub.

A picture on social media also shows a message allegedly written by a member of staff after the incident.

It read: ‘I sat them upstairs on the terrace, these lads came down that were sat up there ten minutes later telling us to go up and see what’s happening – and she has tied them up with a dog lead on one of the beams, whipping them.’

Michelle Wood, general manager of The Mill, told The Sun that it was not ‘behaviour that we wanted to encourage’.

She said: ‘The couple signed in as all customers are asked to do for pandemic regulations and it was obvious that the man was dressed as a woman.

‘But in 2020 if you turn men away because they are dressed as women then it is discrimination.

‘One of the other customers started filming what was going on and then came to tell the staff.

‘They just embarrassed us for her financial gain.’ 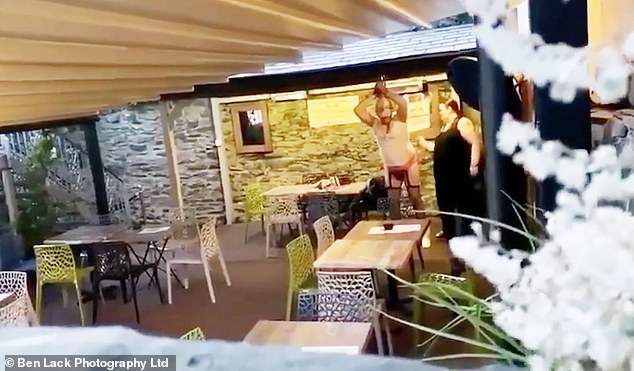 Shocked customers who witnessed the spanking session shared a video online. The sound of the spanking can be heard above the soundtrack of Lovely Day by Bill Withers

One witness wrote on Twitter: ‘Unreal scenes coming from The Mill in Ulverston.’

Lydia, a self confessed ‘mistress’, said most of her clients are in the UK but also has some overseas, adding that she does what ‘people ask me to do for them’, including humiliation and cross-dressing.

Phil Simpson, owner of The Mill, believes the couple has ties to the Ulverston area and hit out at them for seeking to ’embarrass small local businesses’.

Mr Simpson added: ‘As soon as we spotted this couple’s activities they were told to leave our premises.

‘They are now barred and having seen their post on social media the police have now contacted us for more information.

‘We believe that the woman involved is Ulverston-based and we find it quite depressing that such people should seek to embarrass small local businesses in this manner for financial gain.’