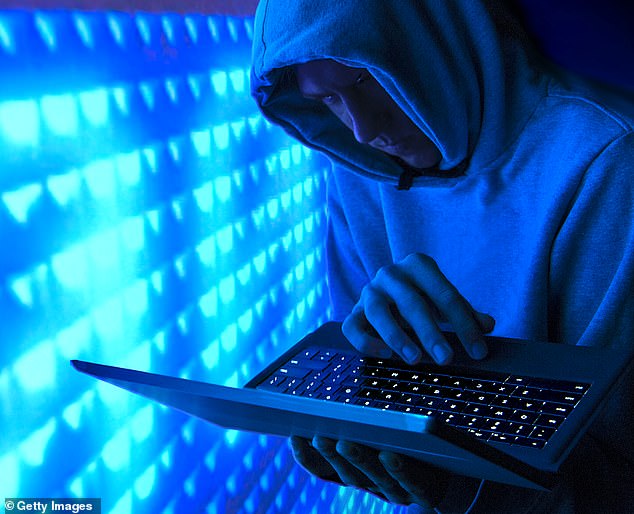 Dina Simmonds had been scouring Facebook Marketplace for second-hand cars when she came across a 2018 black Ford Ecosport. Priced at £5,000, it was within her price range and only a short drive away from where she lived in Surrey.

When the nursery school teacher clicked on the Facebook advert, she was taken to a slick-looking website called Used Cars Dealerships, which has 1,469 vehicles for sale.

The site features glossy photos, well-written descriptions, customer testimonials and a live-chat function where drivers can talk to sales representatives.

Fake: Vehicle scams have been prolific for years, with many bogus salesmen using online marketplaces such as eBay and Gumtree

Dina, 50, asked to view the car but was told this wasn’t possible as the business was online-only. The fraudsters also said they could not deal directly with the public because of Covid-19. Instead, she had to transfer the money and if she wasn’t happy when the car arrived two days later, she would be refunded.

When the mother of two raised concerns about paying for a car she hadn’t seen, she was advised to walk away if she wasn’t comfortable.

She says she then felt foolish for querying the firm when so many businesses were operating solely online during the Covid-19 crisis.

But after she had made the payment, the car never arrived.

Dina had become the latest victim of a sophisticated scam website linked to Russia that is targeting British motorists.

There has been a sharp increase in fraud during the pandemic as crooks exploit victims’ panic.

So-called purchase scams — where victims pay in advance for goods that don’t exist — are one of the most common types of fraud.

There were 73,336 reported cases last year, with victims losing an estimated £59million.

Vehicle scams have been prolific for years, with many bogus salesmen using online marketplaces such as eBay and Gumtree to post fake advertisements.

The crooks typically copy photographs from the websites of legitimate car dealerships and wheel out an array of reasons why customers cannot view the car before paying for it.

In the past, this might have been because they ‘work abroad’ or the car is ‘currently overseas’. Now the coronavirus pandemic has provided the best excuse of all.

After she paid the crooks on August 10, Dina was emailed an invoice and the delivery details. The listing on the website was immediately updated as ‘sold’.

On the day the car was supposed to be delivered, she emailed the fraudsters about 15 times to check what time it would arrive.

But she never heard back. Fearing the worst, she called her bank at 4.30pm to report the scam.

She says: ‘I cannot believe I fell for this. It’s disgusting to think they are getting away with it.

‘It was like reverse psychology. They told me if I had any doubts, I shouldn’t buy. They made me feel I was being silly because this was how businesses operated now, since coronavirus.’ Dina’s bank, HSBC, is still investigating the case.

Fraud investigator ‘Buster Jack’ says he has been contacted by between 20 and 30 victims who have been caught out by the Used Cars Dealerships website.

After one victim forwarded him an invoice with the number 159, he fears the true number could be much higher.

Buster Jack, 63, is a former financial adviser. He and a group of volunteers used to trawl eBay for fake car listings. Now he helps victims fight their cases with the banks and Ombudsman.

He has been contacted about the Used Cars Dealerships website because his name is used by them to reassure victims. On the site there is a green ‘W’ logo with the words: ‘Website verified by Buster Jack. Buy with confidence.’

A fake Facebook page has also been set up in his name to promote the website. One recent post says: ‘Used Cars Dealerships. Recommended by Buster Jack, this website is NOT a scam or a fraud. Buy with confidence and have your car delivered to your address.’ Another advises customers to pay only by bank transfer, a ‘Buster Jack-approved payment method’.

In fact, this is one of the least secure methods, as you don’t have the same recourse you’d have if you paid by credit card, for example.

Buster Jack says: ‘I think the organised crime gang behind this website has found at least 200 victims, probably more, in about three weeks. That’s about ten a day, so we’re talking £50,000 a day as a conservative estimate, though £100,000 a day is possible.

‘And this is just one website. There are others, run by other organised crime groups, that are active right now.’

When Money Mail began a conversation using the live chat function on the Used Cars Dealerships website, we were told by ‘Agent Penelope’ that staff could not deal directly with customers as they were working from home.

She claimed the business model was based on an ‘online experience’ where they deliver cars bought over the internet, but added that they were ‘working hard’ to find an outdoor showroom. But ‘Agent Penelope’ then became impatient.

When we asked why we could not inspect the car before transferring the money, she said: ‘I thought I have just explained the procedure. I am sorry but I am not the one who made the rules here.’ The website claims the firm sells repossessed vehicles and has been in the market for more than seven years. It also offers an ‘explanation’ of its comparatively cheap prices.

It states: ‘Our business is concentrated on profit from quantity (not high prices) and fast capital movement . . . that’s why we prefer to sell a great number of cars and obtain low profit margins per sold unit.’ 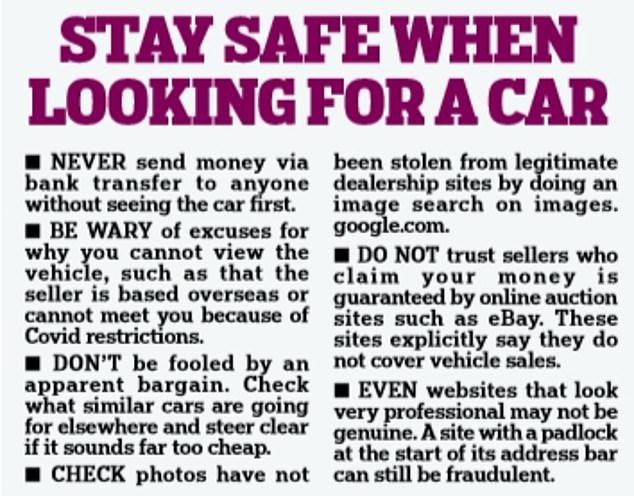 Money Mail asked cyber-security expert Chris Underhill to run a series of checks on the website.

The IP address — a 12-digit code that reveals the location of the user’s computer — showed it was set up in Russia, although the crooks could be anywhere.

Another website, dragonusedcarltd.com, looks identical to Used Cars Dealerships, with the same pictures and descriptions.

Mr Underhill says: ‘This scam site appears to be part of a larger fraud campaign targeting UK customers. They are not difficult to set up — all it takes is a small amount of technical skill and about £100.’

The fraudsters also vet reviews left by customers on Trustpilot.

In the past two weeks, eight negative reviews were posted on the Used Cars Dealerships Ltd page but all were removed after the website owners claimed that they were ‘not based on a genuine experience’.

One has since been verified and reappeared. Trustpilot says that it is investigating.

Aaron Harris, 38, stumbled on Used Cars Dealerships after spotting an advert for a blue 2015 Vauxhall Mokka on Facebook Marketplace. He asked if he could see the car in person but the fraudsters said no. They reassured him they were using an escrow account so his money would be safe.

These are secure accounts that do not allow the money to be released until the buyer is satisfied with the goods received.

He was also sent detailed information including the car’s mileage, previous owners and MoT expiry date, which helped to convince Aaron, a data analyst, that the website was legitimate.

He had set aside £3,500 from his redundancy package to buy a car after losing his job in the energy sector last month.

The car was supposed to be delivered on August 8, three days after he made the payment. When it had failed to arrive by 6pm, he messaged the firm on Facebook and emailed before visiting the website to try live chat. However, the feature had been removed.

Aaron, who lives in Newbury, Berkshire, decided the car might have been held up, as it was the weekend. But when it still hadn’t been delivered by Monday, he reported the fraud to his bank, Santander. It emerged that the crooks had not used an escrow account but electronic money firm Prepay Technologies. His cash was long gone.

He says: ‘I’m gutted. It has destroyed my faith in ever buying anything online again.’

Santander agreed to refund the full amount after Money Mail got involved, A spokesman says: ‘Santander has the utmost sympathy for Mr Harris and all who fall victim to the criminals who carry out these scams. We would urge all customers to be wary of buying an item online they have not seen.’

Another victim of Used Cars Dealerships, Guy Brocklehurst, realised he had been scammed the day after he transferred £3,100 for a Toyota RAV4 on August 8.

The fraudsters had reassured Guy, 48, that his money would be held safely in an account set up in his name until he decided whether he was happy with the vehicle. If not, he would be refunded. Guy had searched the car’s registration on DVLA’s website to check the date it was registered, its engine size and when the MoT would expire. But the day after making the payment, he received a text message from his bank, HSBC, saying he was overdrawn.

Guy, who lives in Lincolnshire, knew he had money but when he called his bank, it claimed he was £1,300 in the red.

HSBC has refunded 50 per cent of Guy’s losses and is awaiting further information from the recipient provider which could lead to further reimbursement.

Guy began researching the company and saw that Buster Jack had warned about it online, so he immediately reported the scam to his bank.

He believes the same fraudsters accessed his account to make the withdrawal and change his telephone banking password. Guy says: ‘It is a very good scam. All the information they sent over about the car came back when I checked it with DVLA.’

Action Fraud says it is limited in what it can do as the website is hosted in Russia but said that the National Fraud Intelligence Bureau (NFIB) disruptions team is looking to take it down.

HSBC has 15 days to investigate bank transfer frauds and says it will update Dina and Guy when it has completed them.

A spokesman says: ‘We adhere to best practice standards to prevent financial crime and where a report of a potentially fraudulent payment or scam is received, we take timely and appropriate action.’

A Facebook spokesman says: ‘Fraudulent activity is not tolerated on our platforms and we are investigating the content brought to our attention. We continue to invest in people and technology to identify and remove fraudulent activity, and we urge people to report any suspicious content to us.’

Used Cars Dealerships did not respond to our questions.