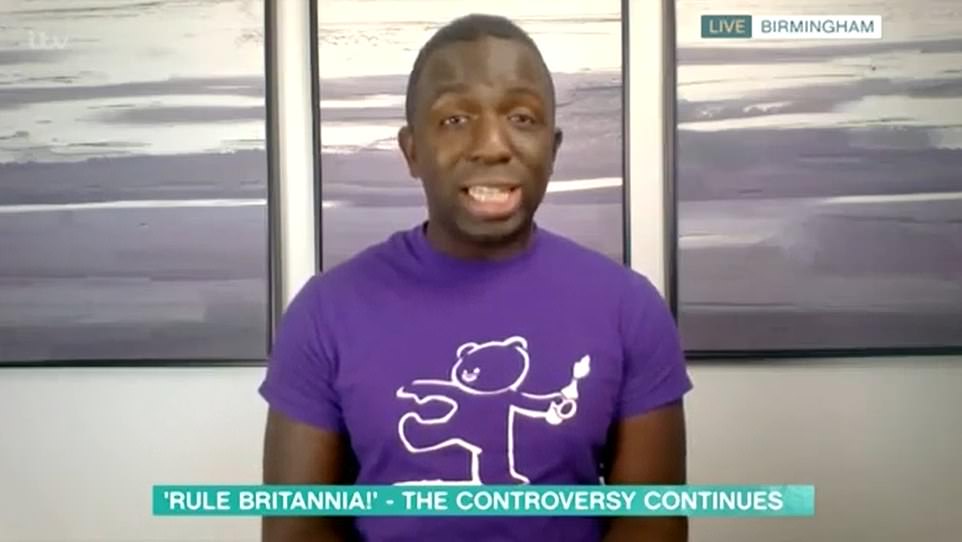 Eamonn Holmes and Nigel Farage clashed with activist Femi Oluwole this morning after he claimed most people ‘don’t really care’ about whether Rule Britannia or The Proms are sung at the Proms.

The trio appeared on ITV’s This Morning to discuss the controversy about whether patriotic songs like Rule Britannia and Land of Hope and Glory should be played at the Proms.

The BBC is under mounting pressure over its decision to censor the lyrics of the Proms anthems because woke activists find them ‘racist’ – and the backlash includes BBC employees, an former BBC chairman and  Boris Johnson.

Mr Holmes asked Mr Oluwole what he thought about the lyrics of Rule Britannia.

Mr Oluwole said: ‘Well, to be honest, I don’t watch the Proms, most people don’t really care about that song because we almost never sing it.

‘But as for that song specifically, it was written at a time that the UK was actively engaged in the slave trade, selling people across the waves, selling black slaves, so they were singing about how we ourselves will never be slaves.

‘If I were to use an analogy, can you imagine if a rapist – and this is not an exaggeration because slavery involved a lot of rape – if a rapist wrote a song about how he himself had never been raped. Would you sing that song? No, because you know that song would be bragging about that rapist’s position at the top of the food chain. We would never sing that.’ 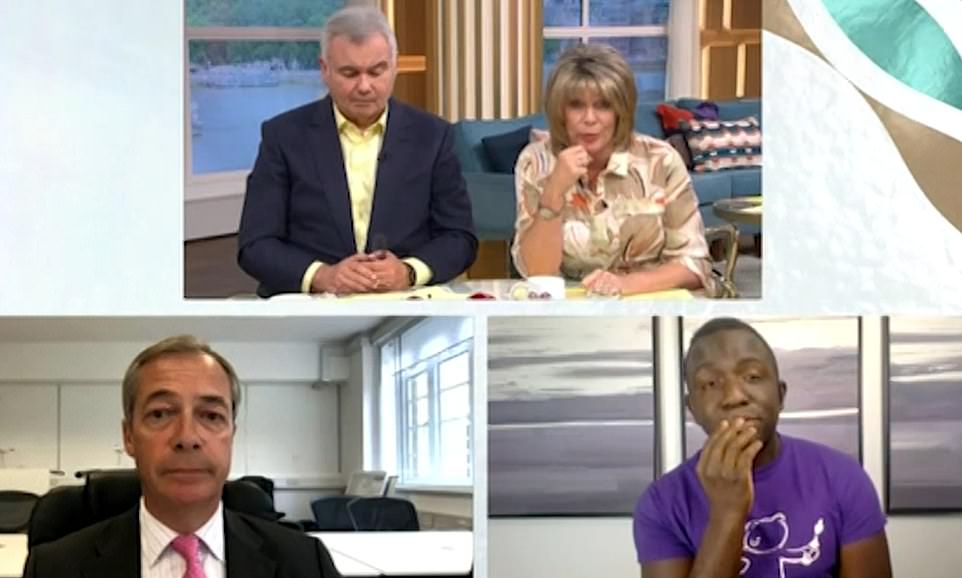 Ex-BBC chairman Michael Grade launched a blistering attack on the corporation over the Proms debacle this morning, calling the decision ‘idiotic’ and a ‘ghastly mistake’ by bosses who have ‘lost touch’ with the British public.

Grade told the Today programme this morning: ‘This is a ghastly mistake which shows how out of touch they are with their audience.

‘I would defend the BBC’s right to make decisions free of political influence but it is clearly a mistake, it’s just idiotic.’

‘Although it may be justified on artistic grounds [the decision] does have while political and cultural significance which they [BBC bosses] either ignored, didn’t understand or were caught in a complete muddle over.’

‘[The decision] is an indication of the BBC’s… that they are out of touch with the rest of the country. They’ve shown that tome and again over Brexit, they missed the big swing at the election. The journalists at the BBC are too trapped in the Westminster bubble.’

‘The big question is what’s the future for British public sector broadcasting and Tim Davie is a fine executive who will serve the BBC very well indeed.What we need to do is take a long hard look and come with a definition and a role fore the BBC that reflects the very different reality today.

The remit of the BBC hasn’t really changed in 100 years, it really is time for a review.

As the debate intensified, Mr Farage dismissed Mr Femi as an ‘extremist’

‘If you’re at home getting angry at what Femi is saying, please don’t, he represents a tiny, extremist minority – the vast majority, huge majority of Britons are tolerant, open, decent people,’ Mr Farage said.

‘We are without doubt the most tolerant country in the whole of Europe. We want racial equality and fairness in our society.

The This Morning guests were asked their thoughts on the Prime Minister’s condemnation of the the corporations’ ‘cringing embarrassment about our history’, adding that he ‘could not believe’ the BBC‘s decision to censor the anthems.

Mr Oluwole said: ‘It’s essentially just him [Boris Johnson] trying to provoke a culture war to distract from everything he’s done, his own fact that he himself said that the problem in Africa is not that we were once in charge but that we are not in charge anymore.

‘He’s just trying to provoke people, he knows that it plays well to his base, he knows that he can use this to say ”they’re coming after your culture” and stir up people, but this idea that the BBC is somehow leading the march for racial equality when it took them two weeks to apologise for a news presenter using the n-word on a live news broadcast–‘

Mr Farage today said that he was ‘very pleased’ the Mr Johnson ‘said what he did’, adding that the BBC had things ‘hopelessly wrong’.

He added: ‘The overwhelming majority of people in this country who care about this want the Proms to be as they’ve always been.

‘As for the song itself, well the song Rule Britannia is about the fight for liberty, it’s about this country – you know, ever since Viking invasions and King Alfred – and of course, pretty relevant when you think that 80 years ago, 80 years ago today, we were engaged in the Battle of Britain which if we hadn’t won, the whole of Europe would’ve been Nazi for decades and decades.

‘We have always been about liberty, and I make this point to Femi – rather than constantly attacking everything this country has ever stood for, can we agree it’s a very good thing that Britain did rule the waves because for 50 years in the 1800s it was the British Navy that got rid of the slave trade when all the other countries wanted to continue it.

‘We are the one country in the western world that fought hard at massive cost to money and lives to get rid of the slave trade. And why don’t we celebrate that fact?’

The Royal Navy had been involved in the slave trade before the practise was abolished in 1807.

It had slaves working in Jamaican and Antiguan dockyards and had its ships escort slave vessels along Africa’s coast, supporting the heinous trade as part of its duty to protect British sea interests.

After the defeat of French Emperor Napoleon at Waterloo in 1815, British naval supremacy was secured, and the West Coast of Africa Station ‘preventative squadron’ was established, which operated against slavers for the next 50 years.

Mr Oluwole responded to Mr Farage: ‘To be honest, I’m not really going to spend a lot of time on this argument that we needed to engage in slavery in order to end slavery, and I’m going to point out the fact that as Nigel Farage just said, he said that we’re coming after the culture, this is what they’re doing.’ 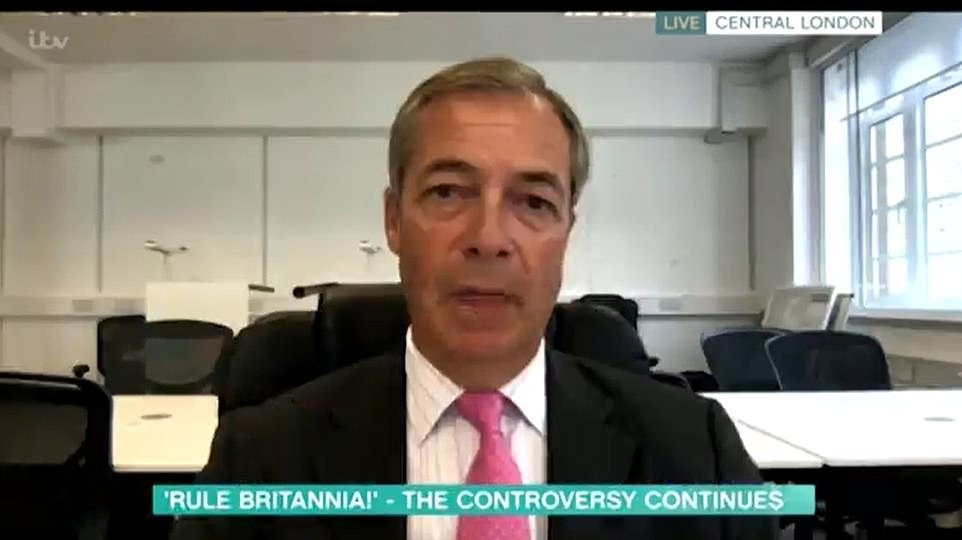 Mr Farage said: ‘The song Rule Britannia is about the fight for liberty, it’s about this country’

WHAT IS RULE BRITANNIA ABOUT? VIKING INVASIONS AND BARBARY PIRATES

Rule Britannia was written for an 18th-century royal masque about Alfred the Great defeating the Vikings.The Viking age in European history was from about 700 to 1,100 AD.

During this period many Vikings left their homelands in Scandinavia and travelled by longboat to other countries, like Britain and Ireland.

However, the Vikings fought the local people, stealing from churches and burning buildings to the ground.

During the Viking Age, the Norsemen took thousands of men, women and children as captives, holding or selling them as slaves.

One estimate claims slaves could have accounted for 10 percent of the population of Viking-era Scandinavia.

Centuries later around the time the song was written so-called Barbary corsairs – Muslim pirates and privateers operating from North Africa – would seize merchant ships and raid European coastal towns and villages, primarily in France, Spain, Italy and Portugal, but also in the British Isles.

Their main purpose was to capture victims for the Ottoman slave trade, along with the general Arab slavery market in North Africa and the Middle East.

Slaves in the so-called ‘Barbary Coast’ in north Africa were made up of many ethnicities and religions, including Christians, Jews and Muslims.

In the first half of the 17th Century, Barbary corsairs, which had authorisation from their governments to attack the shipping of Christian countries, ranged around Britain’s shores, grabbing ships and sailors, selling their captives into slavery.

Ruth Langsford asked whether we should be dwelling on incidents that were in history, and Mr Oluwole said he agreed we should be talking about more pressing issues in the present, but every time he tries to address those issues he keeps ‘getting shut down’.

Mr Holmes said the guest was booked on the show today to talk about his objections to Rule Britannia and Land of Hope and Glory, and asked if he thinks they should be allowed to be played or if they should be banned.

Mr Oluwole said that song was an issue ‘because it’s a distraction’, adding that ‘these people want to distract from the fact that Boris Johnson, with his majority of MPs, could do things to address system racism… instead Boris Johnson is saying we shouldn’t be embarassed by slavery.

He added: ‘Nigel Farage spends his weekends in a boat in the Channel shouting at asylum seekers. They want to distract you from the things that they’ve done.’

Mr Farage said: ‘It’s very interesting isn’t it, that people like Femi who were opposed to the result of the referendum, wanted it to be overturned, are the same people who want to denigrate this country, not just its history, but its present as well.

‘If you’re at home getting angry at what Femi is saying, please don’t, he represents a tiny, extremist minority – the vast majority, huge majority of Britons are tolerant, open, decent people.

‘We are without doubt the most tolerant country in the whole of Europe. We want racial equality and fairness in our society.

‘What we don’t want is a campaign that masquerades under Black Lives Matter, that effectively is a Marxist campaign to bring down this country, to end capitalism, worst of all, their stated aim to defund the police force. ‘

He later added: ‘Land of Hope and Glory is talking about a time when we had this great big empire. But think about that – in all the history of humankind, no one has managed to form an association like we have in the Commonwealth.

‘Whatever you think about it, every country of Europe was trying to build their own, and now we have this fantastic association. And that’s why it can be enjoyed by people around the world.’

Mr Oluwole claimed the lines in the anthem about Britain ‘increasing’ its empire would be offensive to people in former colonies, such as Ireland.

‘In Rule Britannia, we were bragging about ourselves not being slaves while we were enslaving other countries,’ he said.

But Mr Farage hit back, saying: ‘All our countries are forged by their history. We have some parts of it that we are proud of and some that we aren’t.

‘The fact at, whenever you look back at British history, we have been the country that has fought for liberty and that has fought against slavery. So let’s be proud of our past and stop extremists like Femi from trying to tear it down.

‘We are proud of our country, proud of our culture, and I’m not worried about Femi – he represents a tiny number. What I’m worried about is that all of us are forced to pay a licence fee who are happy to pander to this minority view. I don’t think it’s fit for purpose.’