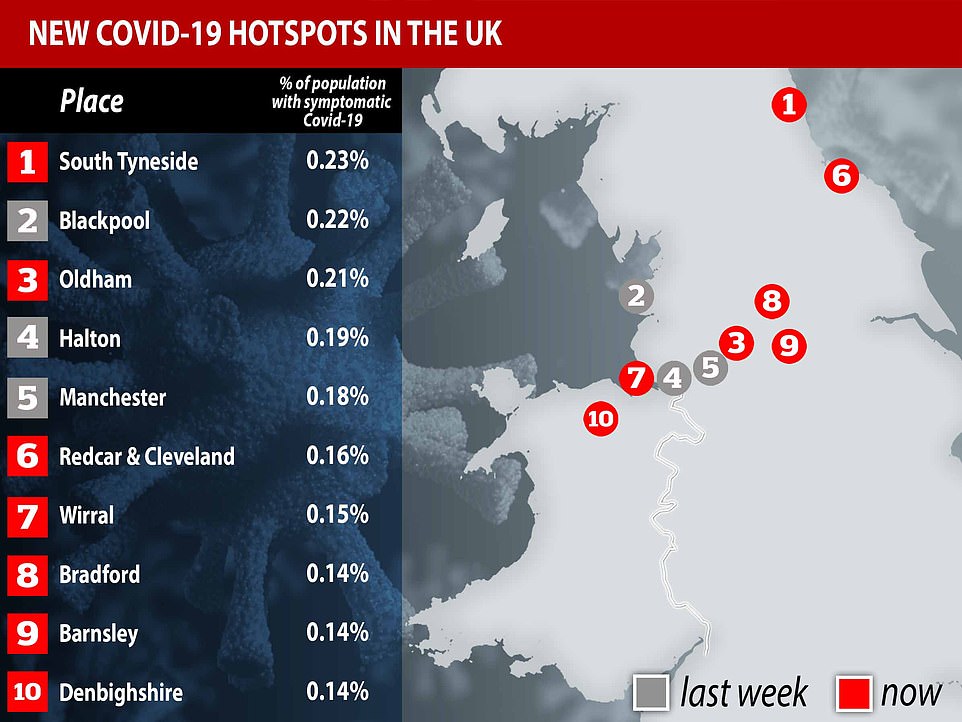 England’s coronavirus outbreak has slowed down for a third week in a row with official statistics estimating there are now just 2,200 new cases per day.

This total, produced by the Office for National Statistics, is an increase from last week’s estimate of 24,600 but the number of new daily cases dropped from 2,400.

Separate data produced by an app run by scientists at King’s College London also shows signs of low numbers of cases, estimating there are 1,073 new ones per day.

The promising statistics are welcome and come as the Department of Health’s official testing programme has shown worrying surges in new cases in recent weeks.

After a six-week stint with fewer than 1,000 cases each day, the three-figure run was broken on August 9 and there have since been 15 days with over 1,000 each. Yesterday, when 1,522 cases were confirmed, was the highest figure in 11 weeks.

Data from the Covid Symptom Tracker app, run by King’s College London, has picked out seven new potential coronavirus hotspots using local testing data and self-reported symptoms from some of its 3.9million users in the UK (Pictured: Areas highlighted in red have been added to the hotspot list this week, while those in grey were already on the list and remain high-risk areas)

This week’s data from the Covid Symptom Tracker app project, run by King’s College London, suggests there are 1,073 new cases of coronavirus per day in England.

These form the majority of the projected 1,292 daily cases across the whole UK, and mark an increase from the 1,265 (1,071 in England) estimated last week.

The app data suggests 18,340 people currently have Covid-19 and that cases continue to decline – last week’s total estimate was 20,299.

Researchers behind the project said flat and shrinking data showed that even as local outbreaks pop up around the country, these don’t seem to be spreading and impacting the national situation.

Picking out hotspots of the disease, the team listed South Tyneside, Blackpool and Oldham as the worst affected areas, each with over one in 500 people infected. 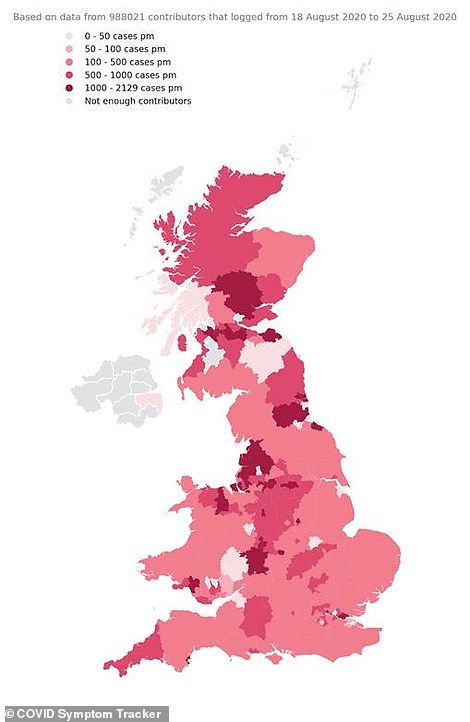 Data from the Covid Symptom Tracker app run by King’s College London and health tech company ZOE shows that areas of the Midlands, North and Scotland appear to be worst hit by coronavirus

Blackpool, and the fourth and fifth placed Halton and Manchester, appeared on last week’s list but seven of the 10 worst affected were newcomers.

Places that were on last week’s list but were no longer areas of concern included Rochdale, Dundee, Nottingham, Blackburn and Salford.

Project leader Professor Tim Spector said: ‘Whilst we are nowhere near back to normal life yet, it appears that the measures currently in place seem to be keeping this low level of Covid within most of the population, which is good news.

‘However, until we have a vaccine, we will continue to walk along this knife edge with the ever present threat of cases going up again.

‘They seem to be well controlled. While the official number of UK confirmed cases is slowly rising, this may be due to increased and more efficient testing.’

King’s College’s estimates, produced alongside health tech company ZOE, are based on results from 8,117 swab tests between August 9 and August 22, and from self-reporting among the app’s 3.9million users in Britain. 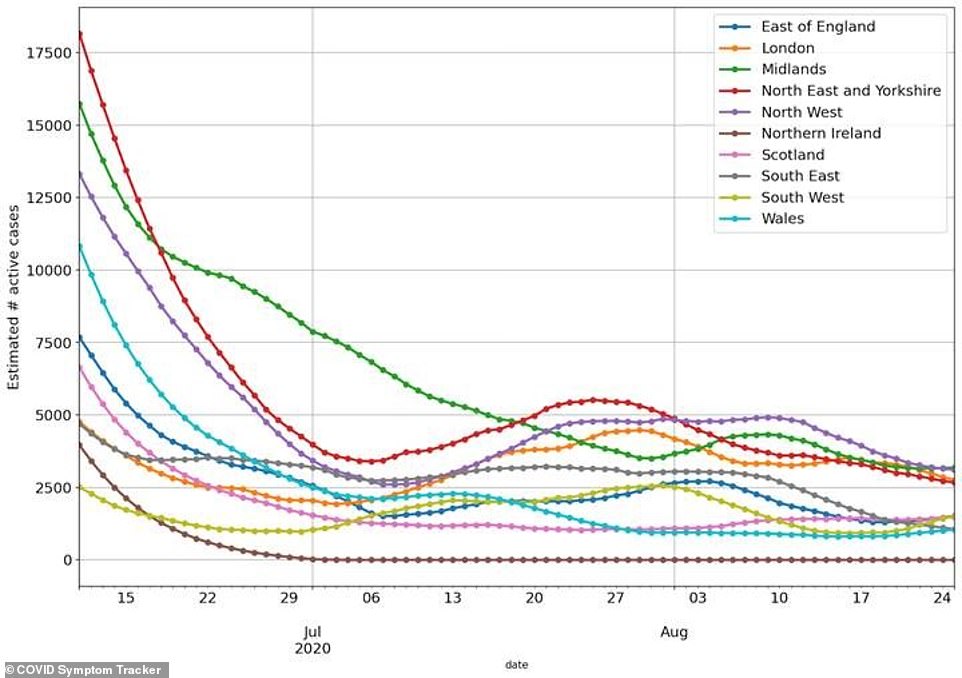 The numbers of people reporting coronavirus symptoms and testing positive for the disease has tumbled since the the start of summer and now appears to be levelling off in all regions, Covid Symptom Tracker data shows