The exact spot where Vincent Van Gogh painted his final masterpiece hours before he shot himself has been discovered in a French village – with the help of a postcard, researchers have claimed.

Experts believe that ‘Tree Roots’ was painted on Van Gogh’s final day in the French village of Auvers-sur-Oise, near Paris.

The tortured Dutch artist had been working on the painting, a jumble of brightly-coloured tree trunks, roots and stumps, on a hot July day in 1890 when he staggered back to the village inn with a gunshot wound to the chest.

What happened beforehand has remained a mystery to scholars of Van Gogh, but the discovery of the roots’ location has shed some light on his last hours.

Pictured: ‘Tree Roots’, by Vincent van Gogh (1880). The roots depicted in the master painter’s final paiting before his death are believed to have been discovered in the French village of Auvers-sur-Oise, near Paris 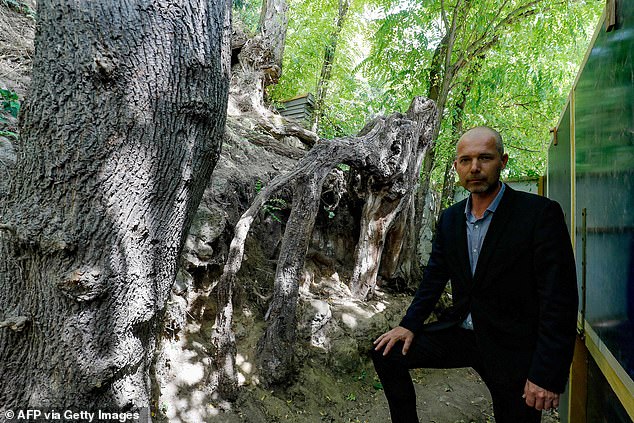 The trunks and roots depicted in Van Gogh’s painting were first spotted in the postcard by Wouter van der Veen, the scientific director of the Van Gogh Institute.

The Institute looks after the artist’s room at the Auberge Ravoux – the village inn where he spent his final 70 days. Van der Veen said most of the tangle of roots is still there, a stone’s throw from the inn.

He said that he made the breakthrough from the postcard of the village from the turn of the 20th century, which shows an embankment with the trees on the main road through the hamlet, 18 miles north of Paris.

He was going through some documents during the coronavirus lockdown when ‘my eye was caught by a detail from the postcard’.

He compared it with the painting and found ‘that the trunks and roots corresponded,’ he said. 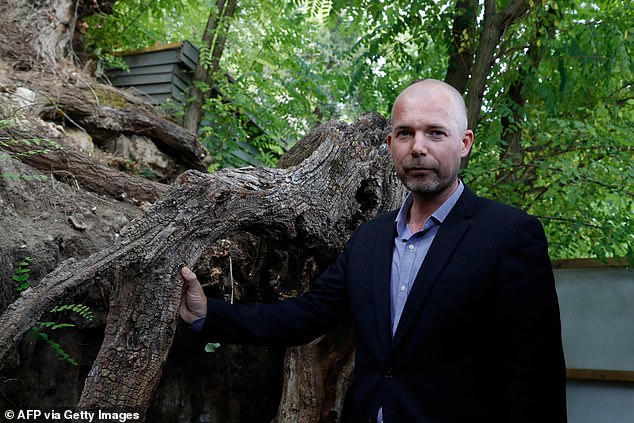 Mr van der Veen said most of the tangle of roots (pictured) is still there, a stone’s throw from the inn

‘Discovering the place where Van Gogh painted his last and most mysterious work is a waking dream which I am still trying to comprehend,’ the researcher added.

His discovery prompted a comparative study of the painting, the postcard and the current hillside.

Researchers at the Van Gogh Institute, along with Bert Maes, a dendrologist specialising in historical vegetation, were able to conclude that it was ‘highly plausible’ that the roots in Van Gogh’s painting had been uncovered.

The main tree trunk in the centre of the painting has survived the 130 years since the death of the Dutch painter, and with the help of the postcard, the researchers were able to bridge the gap between today, and the famous 1890 painting.

It has long been believed that Van Gogh had been working on Tree Roots in the hours leading up to his death, when he took his own life with a pistol shot to the chest. 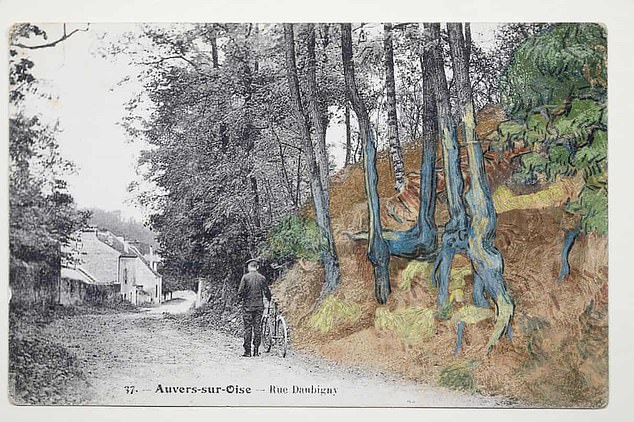 A researcher at the Van Gogh Institute happened upon a postcard (pictured above, with the Tree Roots painting imposed over the top) during lockdown from the early 1900s, which showed a bank beside a road and some tree roots that looked ramarkebly similar to those in Van Gogh’s painting. His discovery prompted a comparative study that they are very likely the same as those in the painting

‘The sunlight painted by Van Gogh indicates that the last brush strokes were painted towards the end of the afternoon, which provides more information about the course of this dramatic day ending in his suicide,’ van der Veen said. ‘We now know what he was doing during his last day.’

Andries Bonger, the brother-in-law of Van Gogh’s younger brother Theo, wrote in a letter that Vincent had ‘painted a sous-bois [forest scene], full of sun and life,’ the ‘morning before his death’.

The spot is around 500 ft away from the Auberge Ravoux, the inn in Auvers-sur-Oise where Van Gogh had stayed during the last 70 days of his life.

Teio Meedendorp, a senior researcher at the Van Gogh Institute, said that it was likely that the artist would have passed the roots a number of times on his way to church or to the local fields before he decided to paint them.

‘The overgrowth on the postcard shows very clear similarities to the shape of the roots on Van Gogh’s painting,’ he said.

‘That this is his last artwork renders it all the more exceptional, and even dramatic. He must often have passed by the location when going to the fields stretching out behind the castle of Auvers, where he painted several times during the last week of his life and where he would take his own life.’

The site has now been put behind a wooden structure for its protection, but beforehand, it was formally acknowledged at a ceremony on Tuesday.

The ceremony was attended by by Emilie Gordenker, the general director of the Van Gogh Institute in Amsterdam, and Willem van Gogh, the great-grandson of Vincent’s brother Theo, according to The Guardian.

Van der Veen noted that the finding puts more doubt on a theory put forward in 2011 that suggests that Van Gogh did not commit suicide, and that rather he was killed by two young boys after a drunken argument. 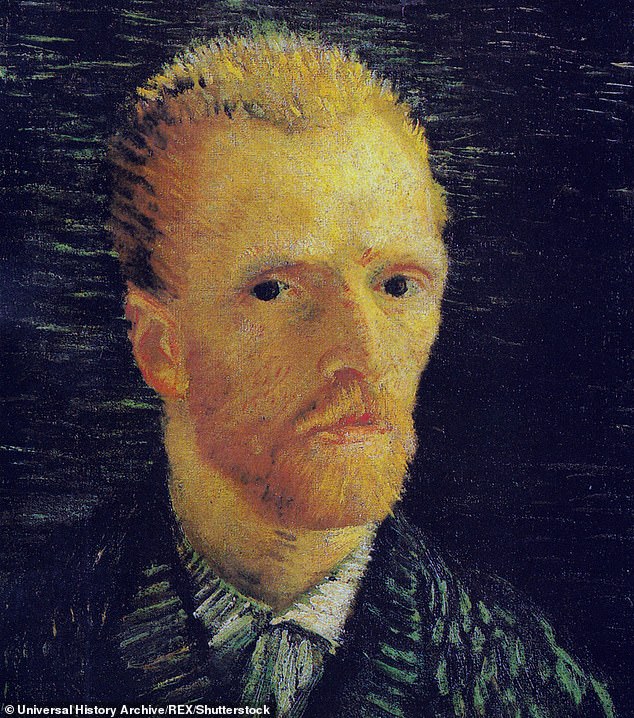 The discovery not only gives insight into where Van Gogh’s (pictured in a 1887 portrait) final painting depicted, but also what he was doing on his final day. The placement of light suggests that he was painting into the early hours of the evening before his suicide

‘Now that we know he was painting all day, there was even less time for that to happen,’ Mr. van der Veen said.

The theory was first floated in a biography of the painter by Steven Naifeh and Gregory White Smith nine years ago, and featured in the 2018 movie ‘At Eternity’s Gate’ starring Willem Dafoe.

Its director, the American painter Julian Schnabel, told news agency AFP when the film was released that Van Gogh was probably murdered.

He insisted that was a man who had painted 75 canvases in almost as many days at Auvers-sur-Oise was unlikely to be suicidal.

Schnabel also claimed that ‘the painting material he had that day was never found.

‘It is strange to bury your s**t if you are committing suicide,’ he added.

But Van der Veen dismissed ‘these lousy theories’, insisting that for him the painting was Van Gogh’s final ‘testament, a farewell letter… Suicide had been an option for him for a year.

‘The thicket of roots was a symbol of the struggles of life. We cut down the tree and from their stumps new shoots appear.

‘It makes sense, the theme of life and death, and eliminates all these lousy theories which do little for his memory,’ Van der Veen said. 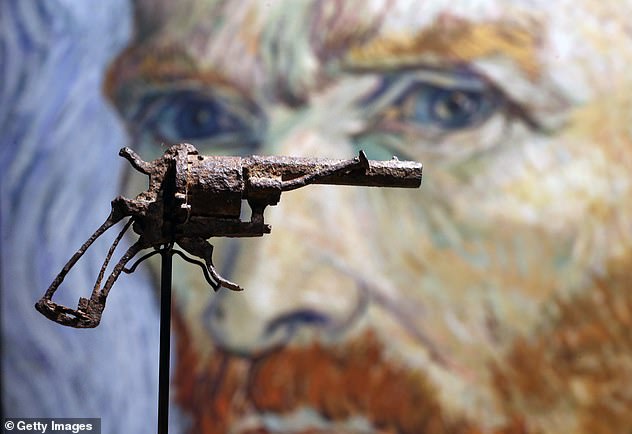 The 7mm-calibre Lefaucheux pinfire revolver that Vincent Van Gogh (in background) is believed to have used to take his own life, fetched €162,500 (£147,000) at auction in Paris last year

Discovered in a field in the village, it was billed as ‘the most famous weapon in the history of art’.

The rusty 7mm Lefaucheux had already been exhibited at the Van Gogh Museum in Amsterdam.

While the Van Gogh Institute said the link with painter could not be proven conclusively, the bullet extracted from his stomach was the same calibre as the one used for the Lefaucheux revolver. 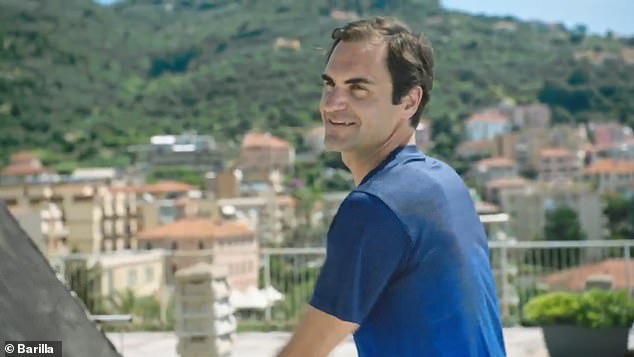 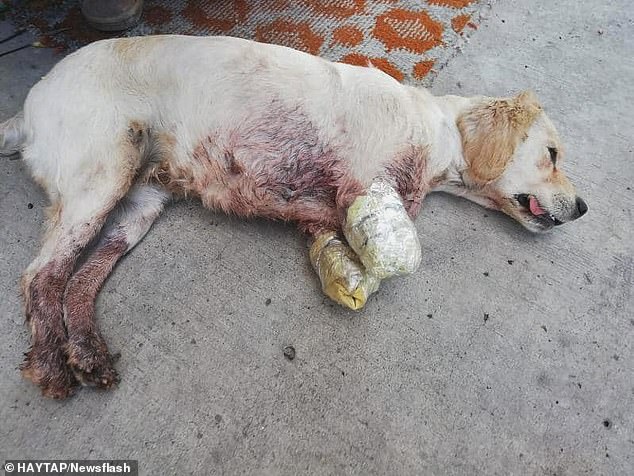 Dog has its front legs HACKED OFF by its Turkish owner 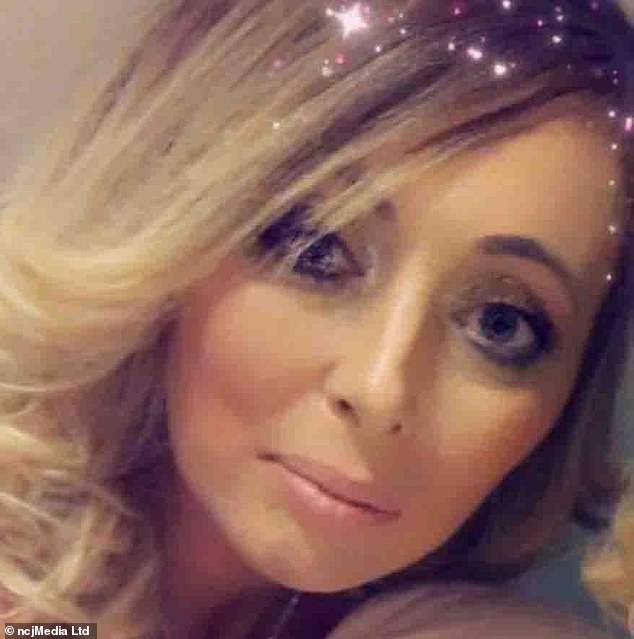 British grandmother, 41, fights for life after collapsing with mystery illness during trip to Turkey