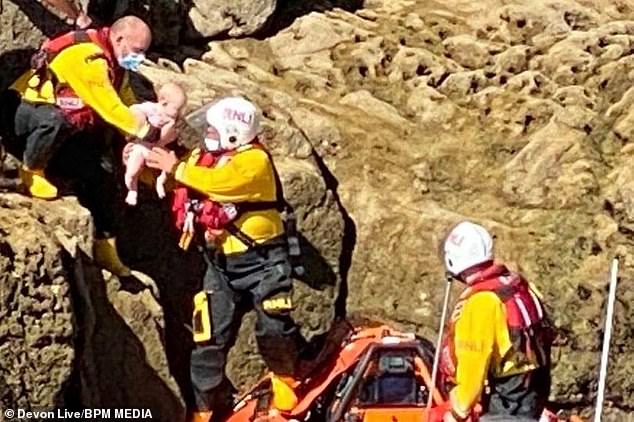 By Izzy Ferris For The Daily Mail

A baby  and three other children were rescued after a quick-thinking father ran their sinking boat onto rocks.

The man has been praised for his actions, which rescuers say ensured the safety of his family after their 24ft vessel began to sink fast while they were enjoying a day out on the water.

The quick-thinking father ran the stricken boat aground on rocks near Torquay, Devon, which allowed the family to all get to safety. 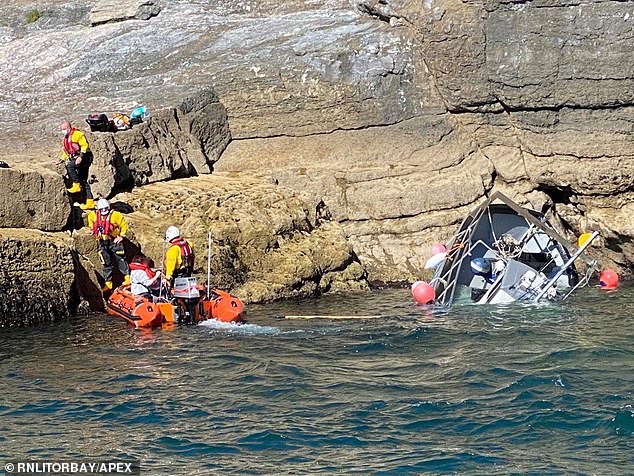 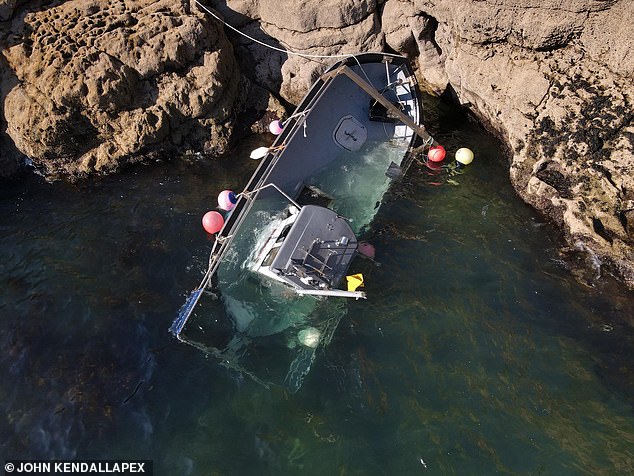 The boat, pictured, had six people on board when it began taking on water. Luckily, everyone was able to escape the vessel without injury

A total of six people were rescued by lifeboats and taken ashore.

The RNLI published images of the dramatic moment the baby and three young children were carried to safety.

RNLI Torbay Coxswain Mark Criddle said: ‘This man did absolutely the right thing in running their boat onto the rocks where they all managed to scramble to safety.

‘We launched both RNLI Torbay lifeboats to the scene because their position was unsure and we knew we had to find them quickly.

‘When we arrived on scene our volunteers ferried the young children one by one to the safety of our all-weather lifeboat, followed by the adults.

‘The family were distressed but otherwise unharmed although their vessel could not be saved. This man’s quick thinking saved his family’s life.’

Two boats from the Torbay Harbour Authority went to the scene to recover debris and disperse spilled fuel. 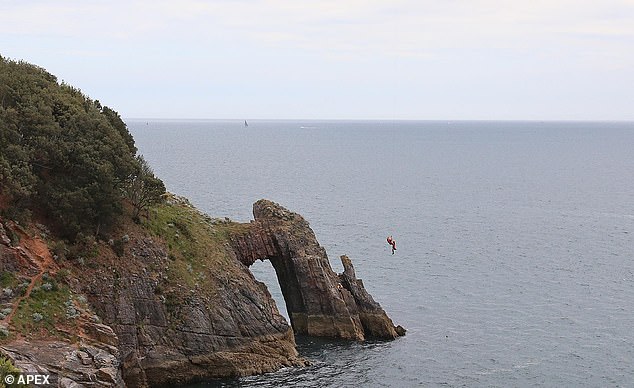 The RNLI and the coastguard helicopter were involved in the rescue

The boat is due to be recovered on Wednesday by a contractor called in by the harbour authority.

The Torbay Council team was also issuing a Notice to Mariners to warn them of the hazard from the sunken boat.

Among the coasteering group to help save the stricken family was Olivia George, from Southampton, Hampshire.

She added: ‘Myself and five other people coasteering, as well as some local teenagers, were first on the scene.

‘We guided the man into the rocks and managed to get the children and parents off the boat onto the rocks before it sank.

‘We then called the coastguard and were on the rocks helping to guide the lifeboat to the incident.

‘The RNLI are absolutely incredible but I feel the civilians, myself included, who got the family to initial safety deserve a mention.

‘I’m just so glad everyone was safe in the end was a pretty intense experience for us all.’