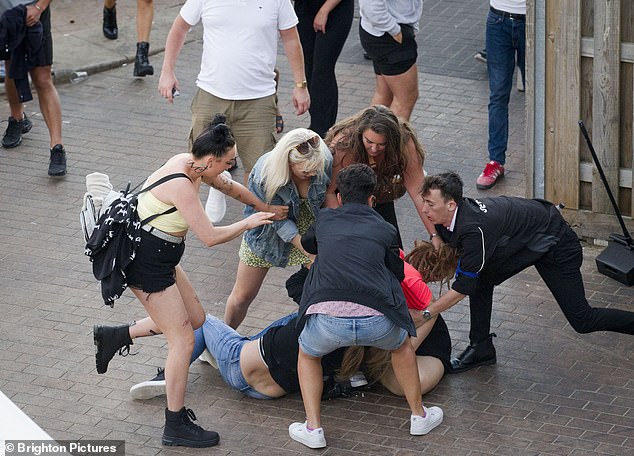 Tempers flared at one of the country’s most popular seaside resorts as drinkers flocked to the beach and others flouted social distancing rules amid soaring temperatures across the UK this weekend.

As temperatures hit 72F in Brighton, East Sussex, an argument between two women erupted into violence with crowds of bystanders cheering them on.

Security staff and passers-by jumped in to help break-up the fight between the women, who appeared to pull at each other’s hair as they tumbled to the ground on the seafront.

Other popular tourism hot-spots also saw an influx of sunseekers this weekend, including in Cornwall, where council chiefs slammed ‘ignorant’ tourists who flocked to the county without their face masks.

Pictures today also revealed how revellers gathered for drinks in the streets of Soho, while Bournemouth beach, always a popular attraction when the sun is out, again looked busy as sunseekers flocked to enjoy a splash in the sea.

As temperatures hit 72F in Brighton this weekend, tempers boiled over when an argument between a group of women erupted into violence with bystanders cheering them on 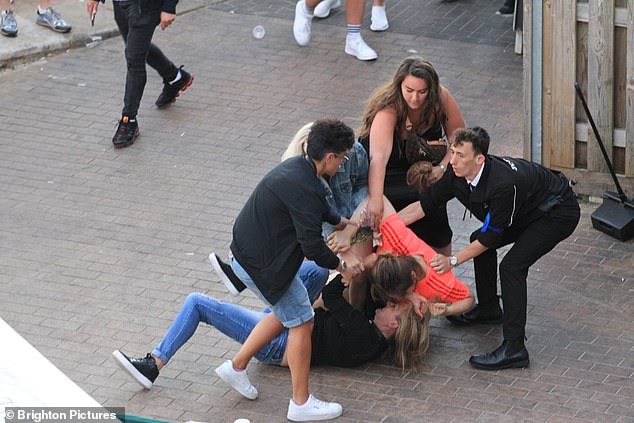 Others, including a security guard, rushed to break up the fight which took place near Brighton seafront 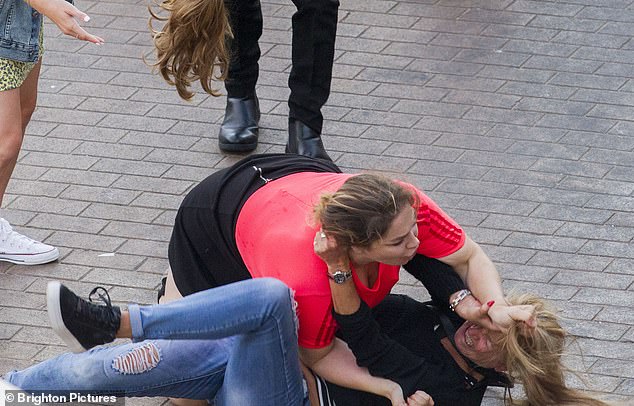 During the fight, both women appeared to grab hold of each other’s hair as they tumbled to the floor

The pictures showing large crowds gathering at popular tourist hotspots come as today deputy leader of Cornwall Council Adam Paynter, speaking to LBC, admitted there is fear in the community for a rise in coronavirus cases as people flock to the region for their holidays.

A man in his 40s has died after being pulled from the sea near a beach in west Cornwall.

Devon and Cornwall Police said they were contacted by the coastguard at 1.30pm on Saturday to reports that a man had got into difficulty at Pedn Vounder Beach, near Porthcurno.

Members of the public and medical staff were unable to revive him, police said.

In a statement, Devon and Cornwall Police said: ‘The next of kin have been informed and a file will be prepared for the coroner.’

Anyone with information about the incident is asked to contact police on 101 and quote log 594 of August 1.

Speaking out about holidaymakers flocking to Cornwall, where today a man in his 40s died after being pulled from the sea, said: ‘It is feeling quite busy, it’s difficult to know exactly where it is numbers-wise.

‘Many hotels and certainly bed-and-breakfasts either haven’t opened or are seeing less visitors but then our campsites and caravans are seeing a lot more people using those sites so it is feeling busy when you’re out in some of our towns.’

Councillor Paynter also  hit out at ‘ignorant’ tourists who refuse to wear face masks during their visit to the south-west.

He said: ‘Clearly we’ve still got a very low number of cases of coronavirus but obviously residents want to keep it that way.

‘I’ve heard two different incidents where people have been overheard saying: “Well, I’m not going to wear a mask. I came down here to get away from all of that”.

‘We did have 20 positive cases this week which was up 14 from the previous week.

‘So it’s something that local residents are concerned about because they’ve been sensible, they’ve behaved.’

In Brighton large groups of people were seen gathering around bars, with many revellers appearing to break social distancing rules by standing close together in large groups. 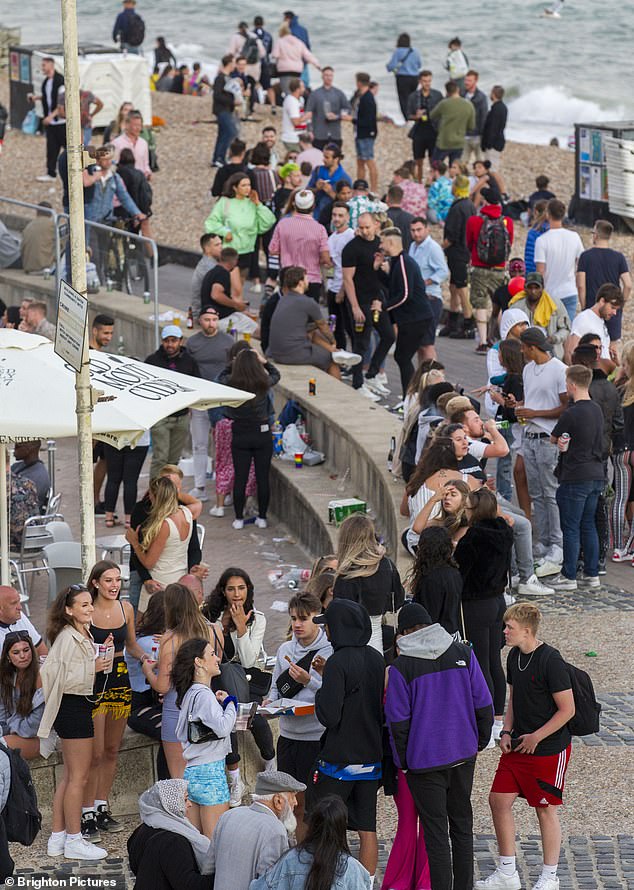 In Brighton, groups gathered near pubs and bars in large numbers as they enjoyed the sunny weather 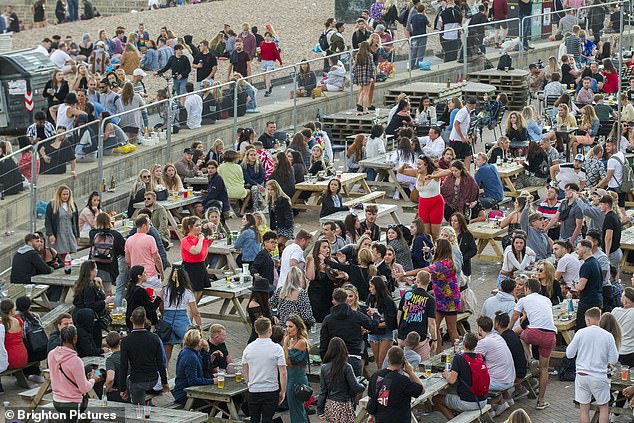 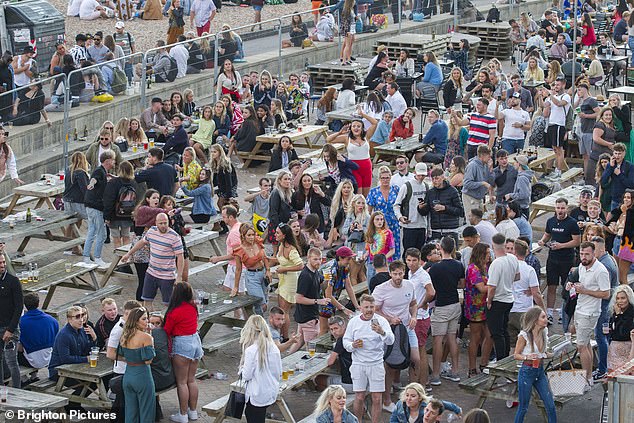 As the crowds gathered to enjoy their drinks, an argument erupted between a group of women 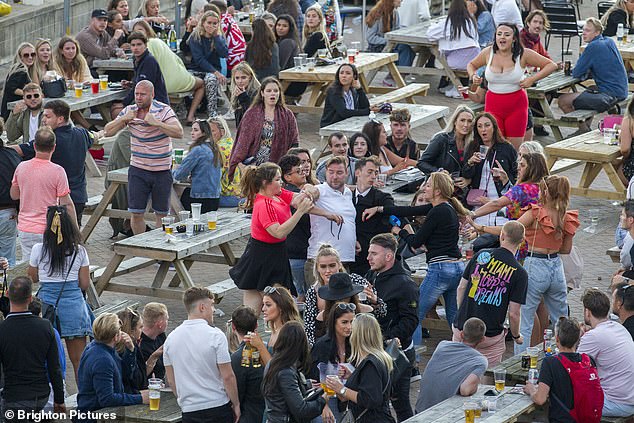 Security staff attempted to break up the argument, which later turned into a full-blow fight

As revellers gathered around tables in large numbers, an argument erupted between one group of women.

A security worker ended ended up holding a hairpiece as he desperately grappled to split the women.

An observer said: ‘It was very warm and large numbers of people had been drinking all afternoon, totally ignoring social distancing measures.

‘Suddenly a minor disagreement erupted into a full-scale fight with the women trading blows.

‘Drinkers and bystanders began cheering and clapping and people were filming the fight on their phones. The behaviour of the women was shocking but the people cheering it on were disgusting.

‘The fight then spilled over to another area with both women grappling and punching each other on the floor.

‘Eventually the single security worker, who was not wearing a mask, managed to separate the pair.’

Police did not step in to enforce the social distancing measures pubs and bars have been ordered to abide by.

The eye witness said: ‘I think the hot weather and drink is a recipe for disaster when it comes to the Government’s anti-Covid-19 policies.’

Although scenes were much more peaceful in the streets of Soho, London, today, pictures show large groups gathering to drink outside pubs and bars.

Meanwhile, Bournemouth beach was typically busy as sunseekers flocked to top up their tans in the warm summer heat, as was Southend beach in Essex. 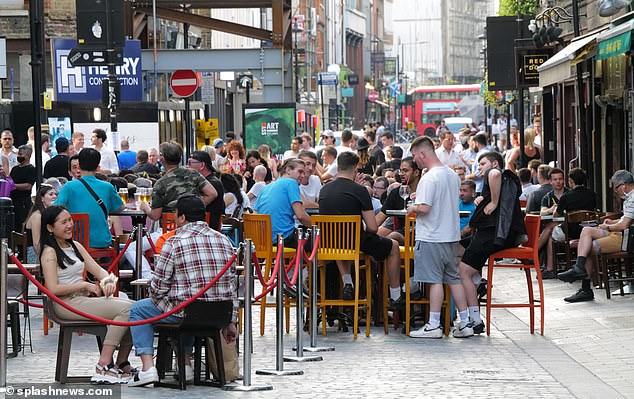 It was a much calmer atmosphere in the streets of Soho in London, where revellers gathered for drinks outside pubs and bars 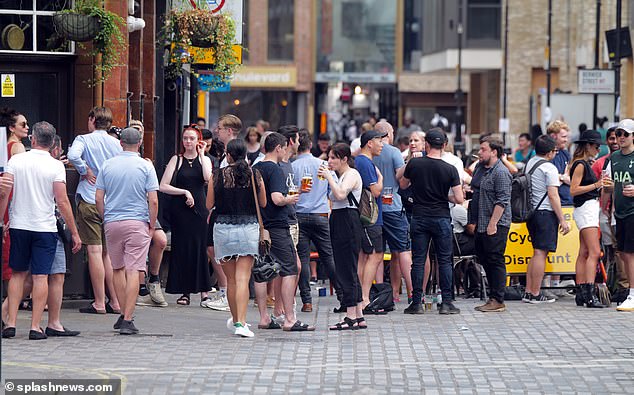 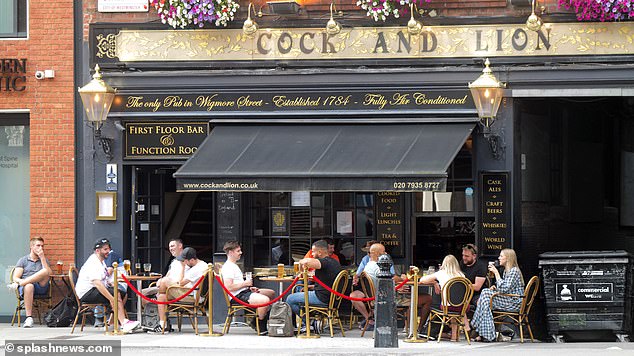 Outside the Cock and Lion in Soho it was even more peaceful, with drinkers able to enjoy a pint at a distance 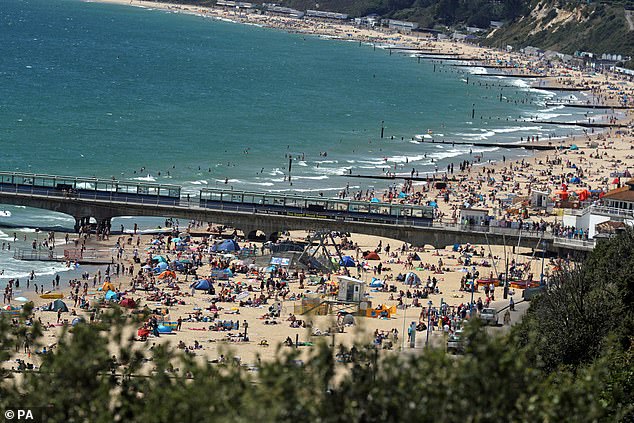 Bournemouth beach, a popular hotspot when the weather is warm, was busy as usual today 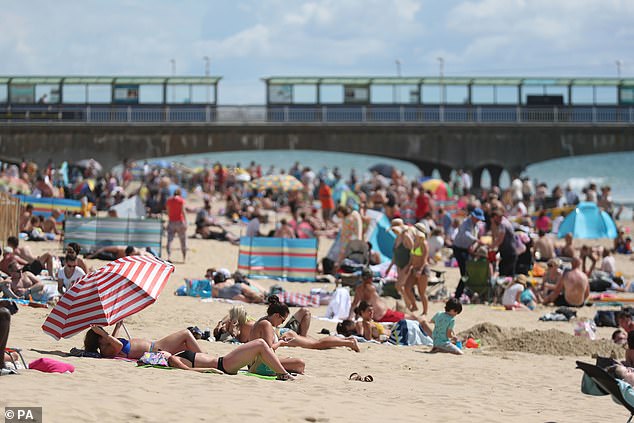 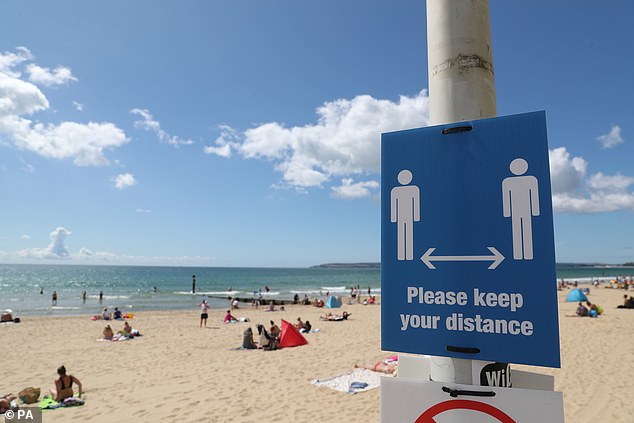 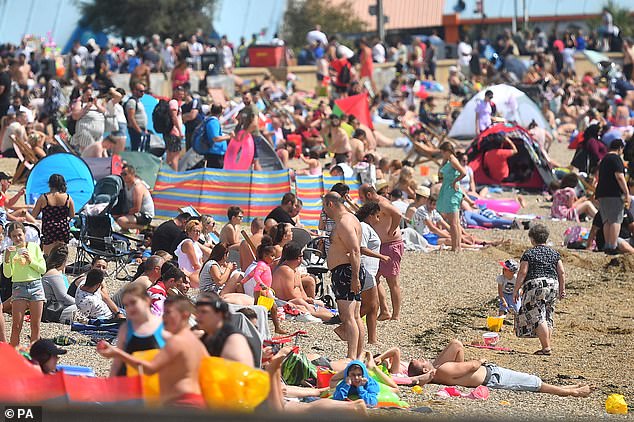 It comes as Britons were given the news that a ten-day heatwave with highs of 95F has been predicted in Britain this week, adding to fears that the country’s beaches are becoming ‘unmanageable’ due to hordes of visitors who don’t follow social-distancing rules.

The Met Office an ‘African heat flare’ from Thursday until mid-August, predicting ‘drier, brighter and very warm’ weather towards the end of the week and ‘very hot conditions’ in southeastern areas.

‘Computer models suggest a very warm or hot period from Thursday, lasting for as long as mid-month. 35C is possible again.’

It comes as the Coastguard had its busiest day in more than four years on Friday, when the UK recorded its third hottest day ever, as it dealt with more than 300 incidents.

Thanet District Council asked people to avoid four of the area’s beaches, including Margate’s Main Sands, due to the number of visitors.

Leader of the council Councillor Rick Everitt said: ‘Early on, it became clear that they were going to reach levels of which we were concerned about.’

Authorities expressed concern about keeping tourists safe in the water, as well as the potential spread of Covid-19 and maintaining social distancing.

‘The RNLI only have a certain capacity,’ Mr Everitt said.

‘They’re on seven Thanet beaches this summer, which is slightly fewer than usual, and they’re doing a great job where they are but they don’t have unlimited resources to deal with people in the water.

‘If you have too many people on the beach, it just becomes unmanageable from that point of view.’ 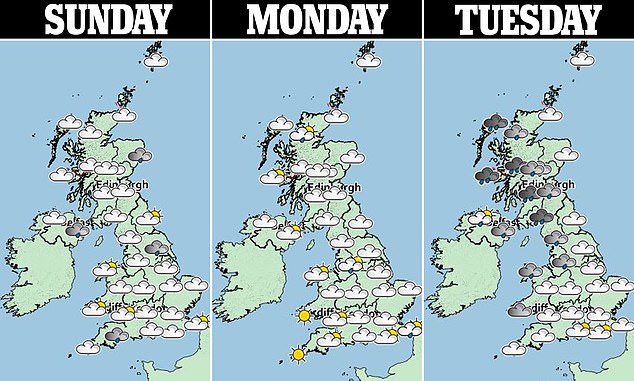 Meanwhile Cornish resorts have been branded ‘Benidorm on steroids’ after floods of visitors left residents too scared to leave their homes and go food shopping.

Street marshals have been patrolling hotspots after tourists poured down narrow streets and flouted social-distancing rules – despite clear warning signs in place.

Locals blasted the guests for their flagrant breaking of the restrictions, with one terrified woman saying she has banned her children from the main street and harbour.

It comes as Boris Johnson ‘squeezed the brakes’ on easing lockdown restrictions across the country after coronavirus infections rocketed in the last month.

Scientific Advisory Group for Emergencies adviser Professor Graham Medley warned the deadly virus could ‘get out of control’ as he claimed there was a rise in cases among younger people.

There were no free spaces for campers or campervans at any of the top 20 sites in Cornwall – or the top 15 in Dorset – for a week’s stay for two adults from today as holidaymakers opt for a staycation rather than trip abroad.

Parks and campsites across Britain have seen a boom in bookings recently, with Haven, Butlin’s, Center Parcs and Hoseasons being inundated with requests.