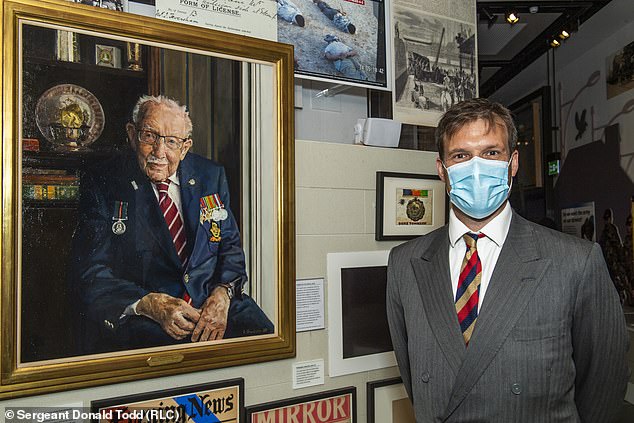 The first official portrait of Burma veteran Captain Sir Tom Moore has been unveiled at the National Army Museum before the 75th anniversary of Victory in Japan Day.

Ahead of the anniversary, artist Alexander Chamberlain, a former cavalry officer, has raised awareness of the Fare East campaign by creating an oil painting of Sir Tom, who raised more than £32million for the NHS at the height of the coronavirus pandemic. 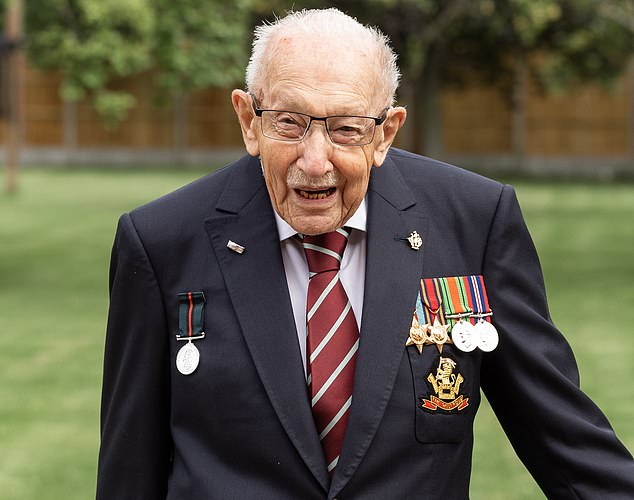 Captain Sir Tom Moore recently shared his memories of fighting in Burma ahead of VJ Day, revealing he carried a suicide pill at all times, in case he was captured by Japanese forces

The centenarian is depicted in his Duke of Wellington’s Regiment blazer and tie, proudly wearing his medals which include the Burma Star, the Defence Medal, the War Medal 1939-45 and the 1939-45 Star.

Following his phenomenal fundraising efforts earlier this year, Sir Tom was awarded the Yorkshire Regiment Medal and a gold Blue Peter badge, which are also included in the painting.

Speaking about meeting Sir Tom, Mr Chamberlin told the BBC: ‘It was amazing. Him and his grandson Benji were incredibly accommodating. 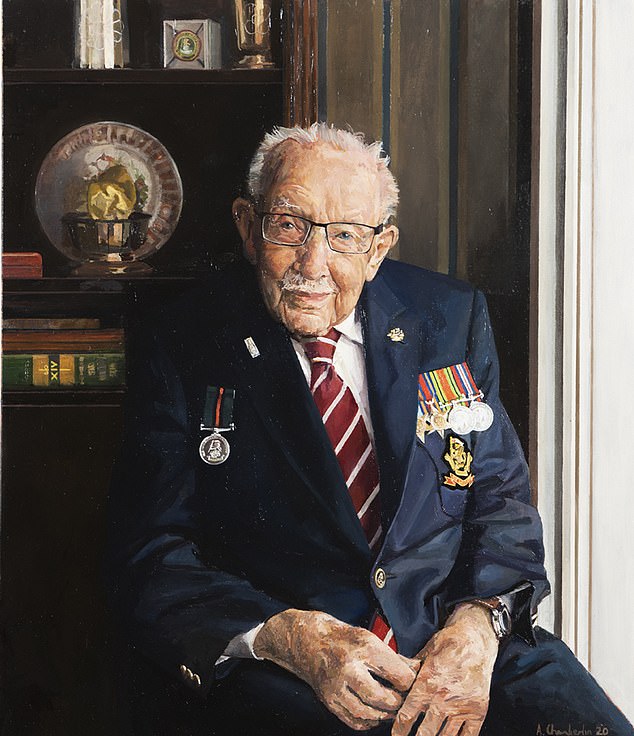 ‘It was very exciting to get him in a place where he was most relaxed, it really helped getting the image across.’

The artist hopes the portrait will raise awareness of soldiers who fought in the Far East.

Ahead of VJ Day tomorrow, Sir Tom shared memories from his time in Burma, modern day Myanmar, including how at the age of just 22, he caught dengue fever and carried a suicide pill should he be captured by the Japanese.

He told Radio Times: ‘I wasn’t very scared. Not really. At one stage we were given a pill that, well, it did you in completely.

‘That was to swallow in case we were captured and forced to give up information.

He added: ‘In Burma I never thought of disaster. I always thought we would win and looked forward to the time when we would keep the flag flying in peace.’ 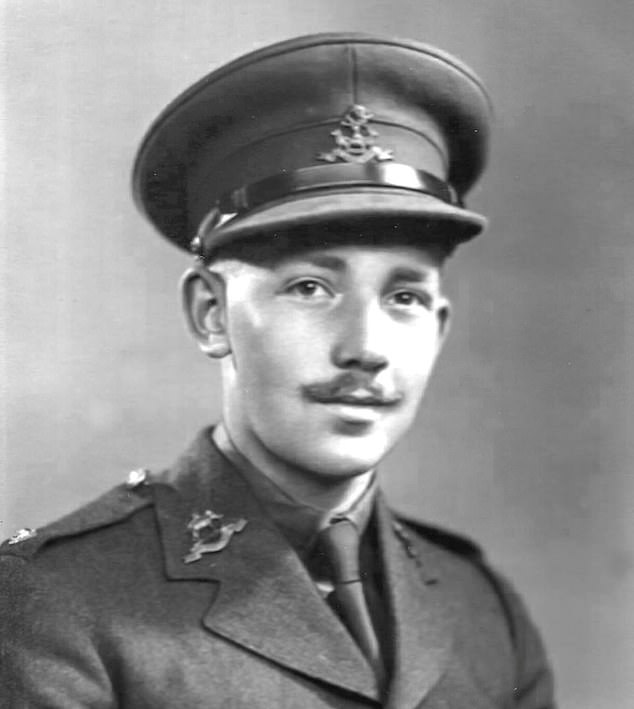 Sir Tom told Radio Times: ‘In Burma I never thought of disaster. I always thought we would win and looked forward to the time when we would keep the flag flying in peace’ 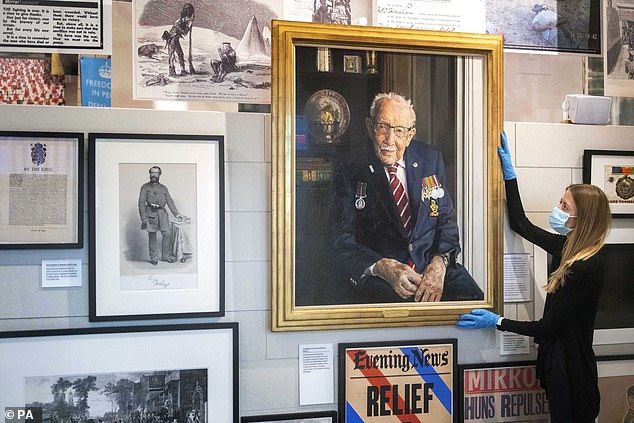 Captain Sir Tom Moore revealed he was never frightened while serving in Burma, despite only being 22-years-old

The ‘Forgotten War’: Burma’s involvement in the Second World War

The Burma campaign was a series of battles fought in the then British colony of Burma, now Mynamar.

It was part of the South-East Asian theatre of the world war, and primarily involved the Allied powers: the British Empire, the US, and China.

They faced Imperial Japan, supported by the Thai Phayap Army and two collaborationist independent movements and armies, the first being the Burma Independence Army.

Puppet states were established in the conquered areas and territories were annexed, while the Allied forces in British India launched several failed offensives before August 1945.

There were four phases: the Japanese conquest of Burma in 1942; failed attempts by the Allies to mount offensives into Burma from 1942 to early 1944; the 1944 Japanese invasion of India, which ultimately failed following the Battles of Imphal and Kohima; and the successful Allied re-occupation of Burma by mid-1945.

The Burma campaign was the only land campaign by the Western Allies in the Pacific Theatre. It was prolonged by seasonal monsoon rains, which allowed effective campaigning for only just half of each year; by famine and disorder in British India; and by the priority given to defeating Germany.

Speaking on ITV documentary Captain Tom’s War, he said: ‘I was with the front of the Indian army, we all battled together.

‘We were under fire constantly, there was an element of discomfort.

One million Allied troops from 40 countries attempted to repel Imperial Japan from Burma over almost three years, between 1942 and 1945.

Speaking of the Japanese fighters, he recalled: ‘They were quite a formidable force because there were people who didn’t mind if they died’.

He added: ‘They were awful, they were what we say, were completely without morals. They starved people to death and didn’t care. That was bad.’

Plans to commemorate the anniversary have been scaled back because of Covid-19.

Prince Charles and Camilla will lead the nation in a two-minute silence held at the National Memorial Arboretum in Staffordshire.

Among those at the event will be 93-year-old Albert Wills, who served in the Far East aboard HMS Indefatigable.

The Red Arrows will also conduct a nationwide flypast, routing over Edinburgh, Belfast, Cardiff and London – including flying over head the Royal Hospital in Chelsea.

Prime Minister Boris Johnson said: ‘When the Second World War ended 75 years ago with the surrender of Japan, British soldiers, sailors and airmen were serving in the Far East, fighting hard to achieve victory – and were among the last to come home.

‘On this anniversary I want to remember what we owe the veterans of the Far East campaign. They brought an end to the Second World War, they changed the course of history for the better, liberated South East Asia, and many paid the ultimate sacrifice.

‘That’s why on this remarkable anniversary – and every day hereafter – we will remember them.’

From Yorkshire to India: Colonel Tom Moore’s career in the military

Captain Tom Moore was conscripted into the British Army in June 1940 when he was 20, alongside all men aged 20 to 35.

He began his military career in Otley, West Yorkshire, where he joined the 8th Battalion, the Duke of Wellington’s Regiment under Lieutenant Lord George Saville.

The Regiment was sent to train in Wadebridge, Cornwall where they were tasked with coastal defence amid a predicted German invasion.

A young Captain Moore was soon promoted to Corporal and sent to the officer cadet training unit in Droitwich Spa.

Here, he celebrated his 21st birthday after he passed as a Second Lieutenant.

In August 1941, he was sent to the DWR headquarters in Halifax where he joined the 9th Battalion at Winchcombe.

The infantry battalion then converted to an armoured regiment 146th Royal Armoured Corp, though the majority of the soldiers could not drive.

In October, the unit was posted to Bombay, now Mumbai, in India. The journey took six weeks by sea, with a four-day delay in Freetown, Sierra Leone and a four-day stop in Cape Town.

Captain Moore then took a train from Bombay to Poona, before arriving at Kirkee, a town now known as Khadki.

The 9th DWR formed the 50th Indian Tank Brigade under the command of Brigadier Schreiber.

Captain Moore was then asked by the Brigadier to start a motorcycling course for the Brigade due to his expertise for the sport.

The Brigade was then ordered to move to Calcutta – the road journey was in a monsoon and took three weeks.

His Battalion was stationed in the Lohardaga district near Ranchi.

They then took part in two exercises in the Arakan before moving further east and south to Rangoon.

Captain Moore was then sent on a course at the approved vehicle depot in Bovington, England.

He remained here as an instructor until it was closed.