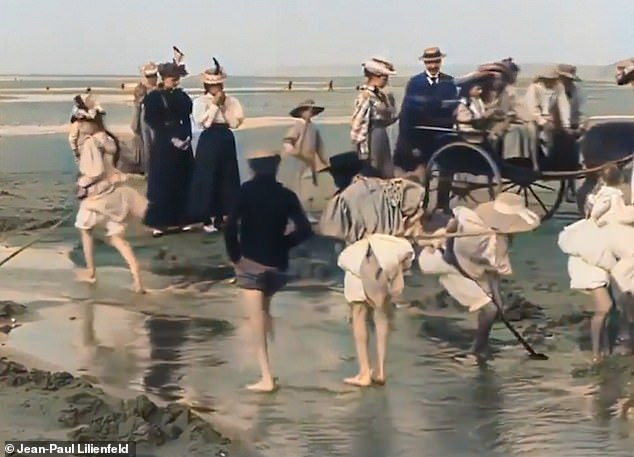 A haunting film showing children on a beach in Victorian England 124 years ago has been restored using artificial intelligence.

Now that even the background is so clear, there is a prospect of people identifying the exact stretch of British coastline where it was shot in the summer of 1896, and even identifying those being filmed.

Jean-Paul Lilienfeld, the French film director, posted the images online saying they had been ‘restored and colourised by artificial intelligence’, with an appropriate soundtrack of crashing waves and children’s laughter and shouting added.

The film from 1896 has been restored to full colour. It shows some Victorian parents and children on an un-named beach. The clip was stored in the French archives

The original black and white version is out of copyright and widely available online, meaning enthusiasts are free to ‘fill in’ the data in between original frames, so creating a more flowing effect that looks closer to real life.

‘Impressive how it makes them so close to us,’ said Mr Lilienfeld, whose films have been nominated for César awards in his own country.

Mr Lilienfeld said the images had originally been filmed by a crew working for Auguste and Louis Lumière – France’s famous Lumière brothers.

They were known the world over for their pioneering Cinematograph motion picture system, and for the short films they produced between 1895 and 1905.

This – combined with the red Kepi-style hats of two boys in the film – led many to assume that it was shot on the coast of France, where the Lumière brothers often worked.

The films were stored in the cities of Lyon and Nîmes, with only very basic French language captions with no names added – either of the beach or those on it.

Congressional archives in America in fact reveal that the film is the work of Alexandre Promio, the French-Italian film maker who travelled to England as a 28-year-old in the summer of 1896 on behalf of the Lumière brothers. 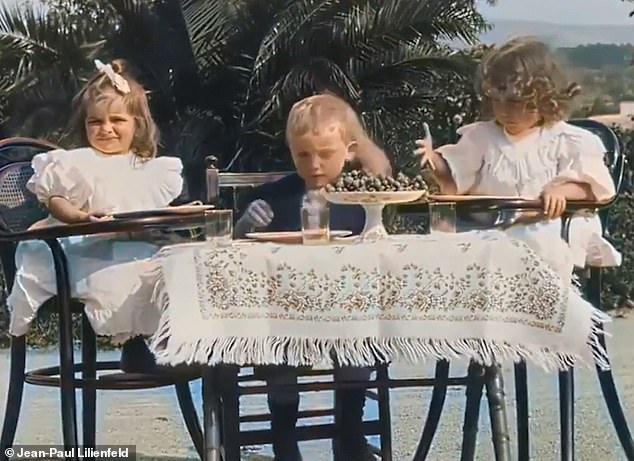 His principal assignment was to make a recording for their film company of the wedding of Queen Victoria’s granddaughter, Maud of Wales.

Maud, the youngest daughter of the future King Edward VII, was aged 26 when she married her first cousin, Prince Carl of Denmark in London.

The marriage took place on July 22nd 1896 in the private chapel at Buckingham Palace, and Promio recorded Maud – nicknamed ‘Harry’ by the Royal Family because she was a tomboy – as she travelled past St James’s Palace in a carriage surrounded by Household Cavalry.

Others covering the wedding included reporters from the Daily Mail newspaper, that had been published for the first time two months earlier.

It was during a trip to a nearby beach in late July or early August 1896 – possibly in Kent or Sussex – that Promio filmed ‘The Shrimp Fishermen’ using an original Lumière Cinématographe (Cinematograph). 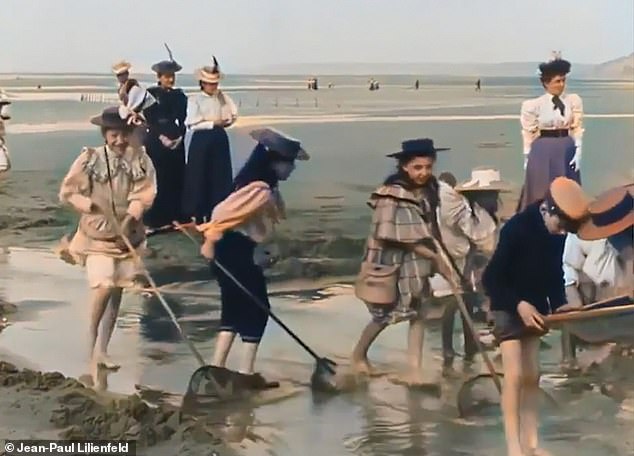 Promio is unlikely to have travelled too far from London, suggesting the scene could be a resort like Margate, where there were vast open sands, and donkey rides were common.

Promio’s portable device recorded on large format 68mm film which was almost double the 35mm film that was to become standard in the film industry.

This means that these surviving nitrate films are rich in detail, especially when restored in 4k digital format.

An intriguing detail picked up during the editing process of ‘The Shrimp Fishermen’ is a small container being carried by a girl with the English word ‘Shrimps’ on it.

As well as shrimping in the film, children can be seen in donkey-drawn carriages, accompanied by adults in straw boaters for the men and ornate hats for the women. 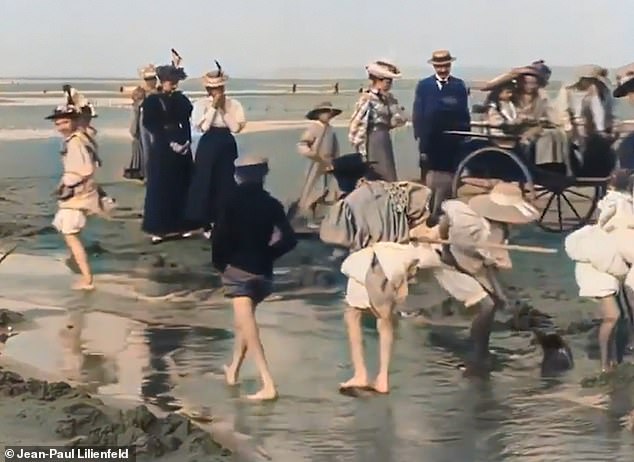 Formal dress was common on the beach during the era, when bathing wagons were wheeled into the sea so that people could swim without showing off their flesh.

Seaside resorts expanded massively, with Queen Victoria herself enjoying trips to the Isle of Wight.

Her Majesty was also a regular visitor to Nice, on the Mediterranean coast of France.

The weight of Victorian film, and the very complicated and heavy early mechanisms, meant that films were only about a minute long, and thus hard to turn into what would now be called a documentary.

There were experiments in combining sound and vision as early as the 1880s, but there was no question of ‘The Shrimp Fishermen’ having an original soundtrack.

All of Promio’s English films, including the seaside one, were shown at London’s Empire Theatre in March 1896.

They were introduced by Auguste and Louis Lumière in a programme that ran for a full 18 months, drawing thousands of what would have amounted to the first British cinema audiences. 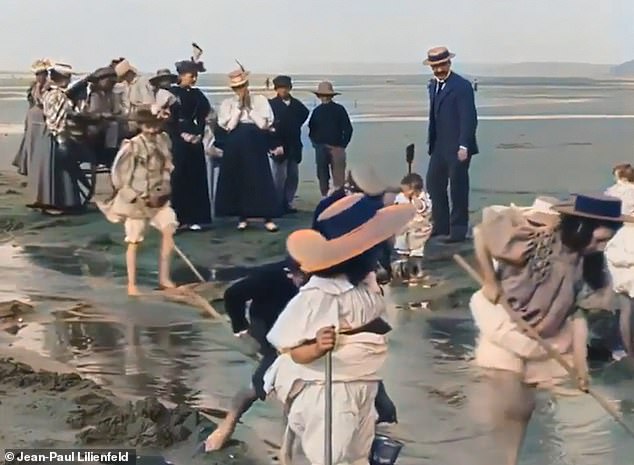 Jean-Paul Lilienfeld, the French film director, posted the images online saying they had been ‘restored and colourised by artificial intelligence’

There is every chance that the English children filmed on the beach ended up having their lives devastated by the First World War.

In his commentary on the restored film, director Mr Lilienfeld said a period of unprecedented peace and prosperity in both Britain and France would end with the slaughter of the 1914 – 1918 war.

The boys would have been exactly the right age to be part of the generation who faced conscription into the military, and then death or wounding on the battlefields of northern Europe.

‘Because the children whom we see happy and carefree in this film will be between 20 and 30 years old in 1914: future widows and future machine-gunned! On the way to the great butcher’s,’ Mr Lilienfeld wrote.