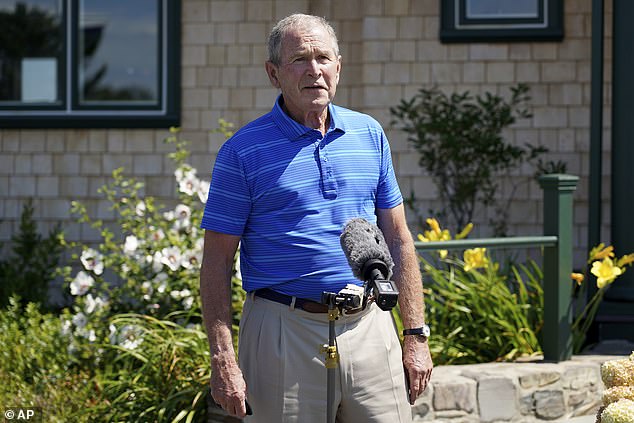 George W. Bush will NOT endorse Joe Biden, his spokesman says amid mounting speculation he will follow dozens of former aides to campaign against Donald Trump

Former President George W. Bush will not explicitly endorse Joe Biden despite a number of more traditional Republicans crossing the aisle to back the Democrat in recent days.

‘We’ve been quite clear and consistent – President Bush is retired from presidential politics and will not be weighing in,’ Bush spokesman Freddy Ford told The Hill newspaper, adding ‘it’s not in the cards.’

A spokesman for former President George W. Bush (pictured) said he was ‘retired from presidential politics and will not be weighing in,’ when asked if Bush might walk across the aisle and endorse Democrat Joe Biden 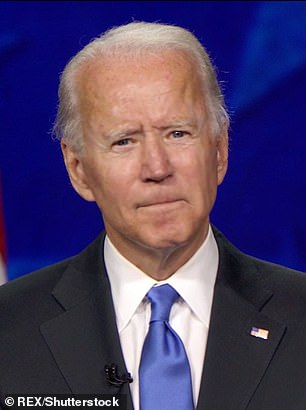 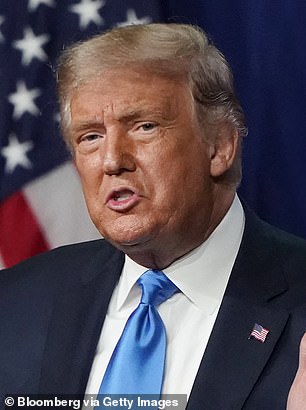 Former Republican President George W. Bush won’t endorse Democrat Joe Biden (left) and it was previously reported that he did not plan to support the re-election bid of President Donald Trump (right)

There’s no question that the relationship between Trump and the Bush family is fraught after Trump’s brutal 2016 primary campaign against former Florida Gov. Jeb Bush, who Trump famously coined as ‘low energy.’

But Biden hasn’t been able to capture the endorsements of any top-tier Republicans or those who are currently in office.

Sen. Mitt Romney, the Republicans’ 2012 nominee who voted for one of the articles of impeachment against Trump, stayed silent during last week’s Democratic National Convention when there was similar speculation that he might back Biden.

Cindy McCain, the widow of GOP Sen. John McCain, the party’s 2018 presidential nominee, narrated a video about her late husband’s friendship with Biden, but did not appear on-screen to officially endorse him.

And Bush did pop his head back into national politics last week to endorse Sen. Susan Collins, a moderate Republican who’s facing her greatest re-election challenge yet in Maine, after her vote for Supreme Court Justice Brett Kavanaugh made her one of the Democrats’ biggest targets.

Collins is facing another woman on the ticket, Democrat Sara Gideon.

The former president and former first lady Laura Bush invited Collins over to lunch at the family’s Kennebunkport, Maine compound Friday, before coming outside and addressing the press to make the endorsement.

Prior to that, The New York Times reported in June, that Bush would not be supporting Trump’s re-election effort – and he’s not slated to speak at this week’s Republican National Convention.

Collins and a number of other endangered GOP senators are also staying away from the four-day Trump affair, which feature appearances from the president every day.

Additionally, a group of Republicans who are either explicitly supporting Biden or simply against Trump, have launched their own shadow convention this week, called the Convention of Founding Principles.