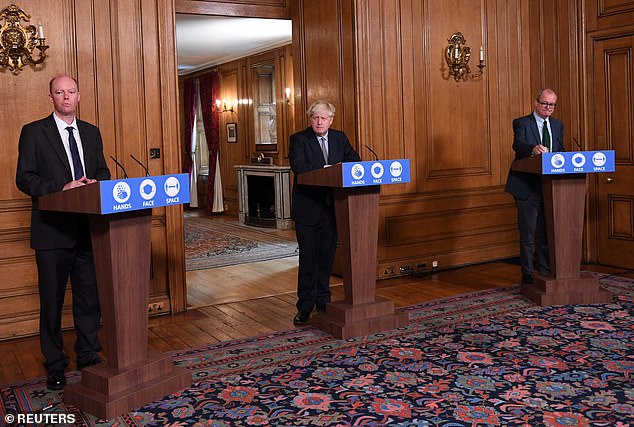 The three Amigos are chillier these days – like a rock band in separate limos: HENRY DEEDES watches the return of the Downing Street coronavirus press conference

By Henry Deedes for the Daily Mail

A nyone seen the Prime Minister? There are worries here in Westminster he’s been kidnapped. Bundled, whisked away and chained to a radiator in some remote hangar somewhere with a stitched-up balaclava over his head.

Were this America, we’d be pasting his photo all over milk cartons pronto. Because whoever it was addressing the nation yesterday certainly didn’t sound like Boris.

Didn’t look much like him either. That fuscia-flushed creature hunched over the podium appeared far too healthy for a start.

You could actually make out his chin. What doom and gloom this imposter uttered. What joyless, downbeat dross.

For nearly 20 minutes he spoke inside the Downing Street briefing room, that soul-sapping space which always smells of Pledge polish. He laid out plans to restrict social gatherings as of next Monday to just six people.

‘The rule of six,’ as he called it. Had this been the real Boris speaking, such dispiriting talk would have been interspersed with promises of new dawns and sunny uplands.

A barrage of boosterism, in other words. Instead, his text sounded like it could have been penned by an offizier in the East German Stasi.

These new directives would be ‘set out in law and it will be enforced by the police’ he said. Anyone breaking the rules ‘risks being dispersed, fined and possibly arrested’. Jawhol!

There was a draconian promise of stronger enforcement of the rules already in place. In which case, the police could start by clearing the Extinction Rebellion lot out of Parliament Square.

Their repetitive drum beating yesterday was driving anyone within earshot potty. In a brief moment of compromise, the PM promised to listen to ‘feedback’ from the public. Feedback? That’s the sort of thing automated market research emails bleat on about. Another dead giveaway.

The real Boris would never use such a word. We heard how beleaguered pubs and restaurants would now be required by law – rather than simply advised – to take customers’ details and keep them for 21 days.

Failure to do so will result in proprietors having their collars felt. As if they didn’t have enough problems! On and on the Bojo jackboot swung.

‘Covid-secure marshals’, whatever they are, would be enlisted to help ensure social distancing in city centres. B order enforcement would be stepped up to ensure quarantine was being complied with. The more we heard, the more wearying it felt.

Accompanying the PM were our old boffin friends Chief Medical Officer Professor Chris Whitty and Chief Scientific Adviser Sir Patrick Vallance. Back when we were in the early grip of the virus, we used to refer to them as the Three Amigos. Their rapport seems chillier these days.

Were they a rock band they’d be at the stage of travelling to gigs in separate limos. Whitty was his usual moony presence. 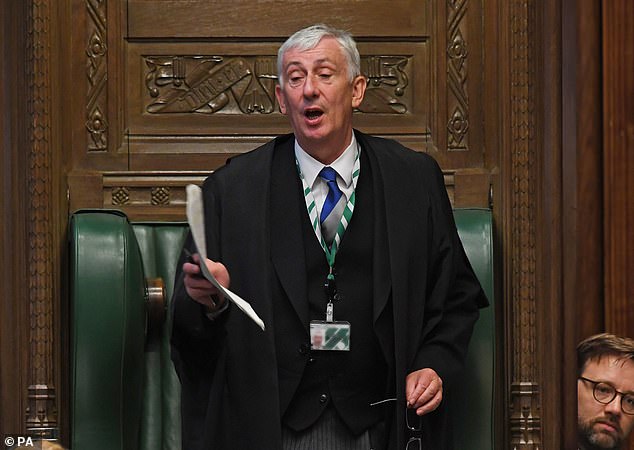 He wore the sort of dishevelled suit which would not be out of place in the bookies’ enclosure at a provincial racecourse. Sir Patrick at least had a few optimistic things to say about a vaccine. He didn’t think it was unrealistic to think we might have one by next year.

What a hallelujah moment that’ll be. The TV hacks were aggressive as ever. They’ve never seemed that keen on Mr Johnson. Or do their producers encourage them to be like that? The BBC’s Laura Kuenssberg and Sky’s Beth Rigby went hunting for a headline by asking whether Christmas was effectively cancelled.

Fake Boris said it was too early to say – but admitted such a situation would be heartbreaking. Oh, I don’t know. Plenty of matriarchs I know will be delighted at being able to give the in-laws a swerve this year.

By the by, Sir Lindsay Hoyle wasn’t happy details of the ‘rule of six’ were announced to the media first yesterday. Following a deathly dull PMQs, he gave Matt Hancock a proper clip round the ear for not informing Parliament about them during his statement on Tuesday.

Sir Desmond Swayne (Con, New Forest West) had complained to the chair they not been allowed to debate the matter first.

Fruity Sir Dessie, in case you’d missed it, is a bit of lockdown sceptic. It’s not often Sir Lindsay gets shirty – unlike his predecessor John Bercow. But yesterday he was fuming.

By way of punishment he threatened to run Hancock ‘ragged’ by summoning him to the chamber every day to answer urgent questions. After the litany of heavyhanded proposals laid out in yesterday’s press conference, perhaps he should summon the Prime Minister to the chamber to explain himself. It’ll be interesting to see which Boris turns up.