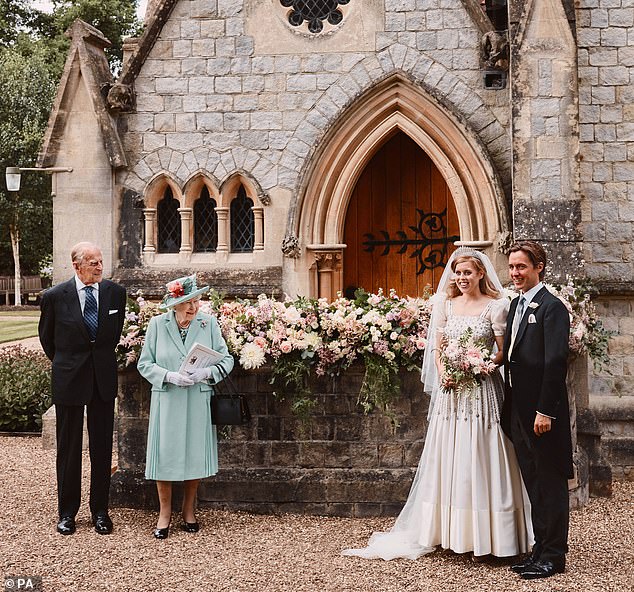 Getting married in the middle of a global pandemic would never be any young bride’s dream.

Add to that the embarrassment of having your father caught up in a salacious sex-trafficking scandal, which has shamed the whole family, and you have the ingredients of a nightmare wedding.

But Princess Beatrice and her handsome bridegroom, Edoardo Mapelli Mozzi (or Edo as he is known) seem to have pulled it off.

Their wedding pictures suggest the occasion was all the more romantic precisely because it was such an intimate affair, with just 16 or so guests, in a tiny chapel, in total secrecy, far from the media gaze.

Yet make no mistake, this wedding was no small event. Having the Queen and Duke of Edinburgh at her (socially distanced) side, made it — in its own way — the grandest affair imaginable.

Close but socially distanced: Princess Beatrice and Edoardo Mapelli Mozzi with The Queen and Prince Philip at the wedding

The fact that, at the ages of 94 and 99, they came out of their Covid-safe isolation in Windsor Castle to celebrate with their 31-year-old granddaughter speaks volumes about how close they are to her.

The one person Beatrice was determined to have at her wedding was her grandmother, which is why the ceremony was somewhat hastily arranged before the Queen and Duke head up to Balmoral for the rest of the summer.

Being royal means that almost everything you do and say will be recorded and analysed, which pretty much rules out spontaneity. So you can be sure that the wedding pictures released by the Palace, omitting Prince Andrew, was done deliberately.

He’s still embroiled in a legal dispute with American lawyers and the FBI over giving a statement about his friendship with convicted sex offender, Jeffrey Epstein. 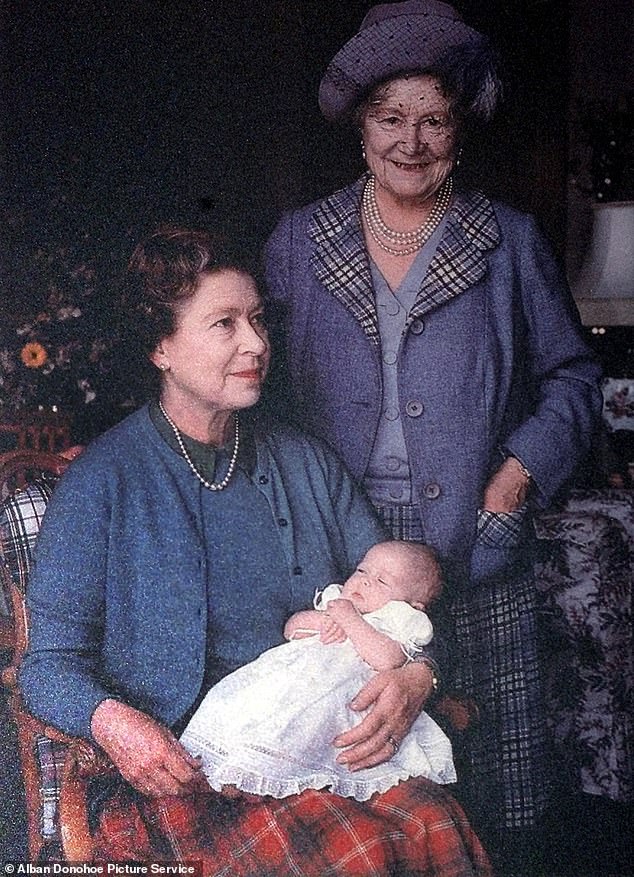 Having the Queen and Duke of Edinburgh at her (socially distanced) side, made it — in its own way — the grandest affair imaginable. Pictured: The Queen holds an infant Princess Beatrice in 1988

Although he is said to have walked his elder daughter down the aisle, the Duke is now rarely seen in public and has no official royal role.

My guess is that Princess Beatrice’s mother, Sarah Ferguson, was proving her unwavering loyalty to Prince Andrew by staying out of the pictures, too. Both, however, are all the more conspicuous by their absence.

Instead, we see the bride with her grandparents, who look genuinely delighted and very relaxed.

The strength of the love between Beatrice and her Granny — as her grandchildren call her — couldn’t be clearer. Symbols are deeply significant in royal circles: a brooch, a hat, a necklace are often carefully chosen to relay a message of support.

And so the Queen’s gesture in lending Beatrice a vintage Norman Hartnell gown, which she herself wore almost 60 years ago to the film premiere of Lawrence Of Arabia meant a lot.

It was a highly unusual choice for any royal bride and must have made the occasion extra special for both Beatrice and the Queen.

Even more significant was the Queen’s decision to lend her granddaughter the Queen Mary tiara which she wore at her own wedding in 1947. She has previously loaned it to one other royal bride, her daughter Princess Anne, in 1973.

The Queen has been exemplary in supporting her grandchildren through the ups and downs of life in the royal goldfish bowl.

Six of her eight grandchildren have watched their parents’ marriages disintegrate, in the full glare of worldwide publicity. Beatrice has seen both her mother and father face public humiliation . . . from Fergie’s topless toe-sucking shenanigans with her ‘financial adviser’, to Andrew’s shameful dismissal from royal duties by his own mother. 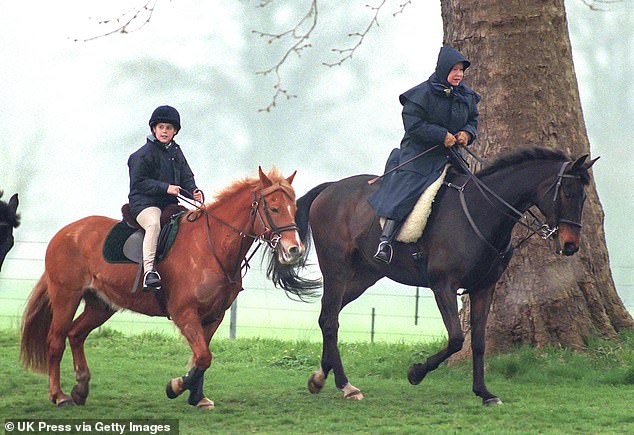 The truly devastating effect this has had on their daughters could not have been lost on the Queen.

Through it all, Granny has been on hand to comfort, advise and protect. The Queen has maintained a civil relationship with Sarah for the sake of Beatrice and Eugenie — something Prince Philip has struggled to do, though he managed to put his differences with Fergie aside when it came to his granddaughters’ weddings.

Like many grandparents, the Queen and Duke have had more time in recent years to share with their grandchildren, than perhaps they did with their own children when they were growing up.

Though the Queen still works hard, studying official papers and carrying out numerous engagements, she is no longer away on long overseas tours as she was when her children were young.

So she has been on hand for the grandchildren far more than she was with her own offspring, and so has a closer, warmer relationship with them. Prince Charles once remarked that when he was young, he virtually had to make an appointment to see his mother.

Over the years, Beatrice has been lampooned for her fashion sense, mocked for being a princess without a royal role (although she works for Afiniti, an artificial intelligence software firm) and pitied for the scandals involving her parents. The Queen has always been there for her, offering kindness, love and wisdom.

Beatrice was never going to be able to have the kind of wedding younger sister, Eugenie, enjoyed, with cameras, cheering crowds and a carriage ride through Windsor.

Perhaps that’s not what she wanted anyway. But there’s no doubt that the Queen went a long way towards making Beatrice’s very private day truly special — as only a loving Granny can.