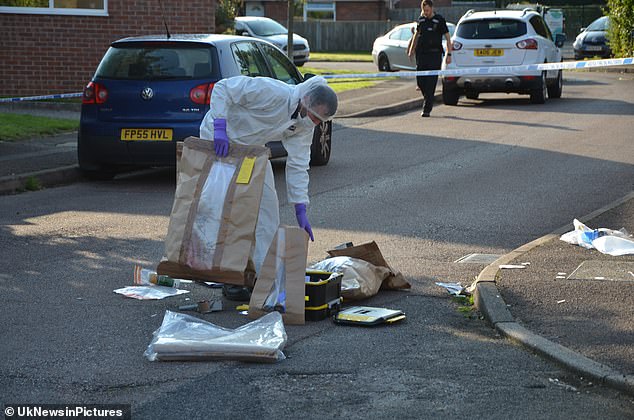 Police are searching for a knifeman after two teenagers were stabbed in an attack that is being treated as attempted murder, the force have confirmed.

Two 16-year-olds were stabbed during an incident in Tilehurst, Berkshire, at around 11.30pm on Saturday night.

One teenager was left with a wound to his chest while the other suffered multiple injuries to his chest and shoulder.

Police launched an attempted murder investigation on Sunday after both teenagers were taken to hospital for treatment, where their injuries were not considered to be life-threatening.

Police are searching for a knifeman after two 16-year-old boys stabbed during an incident in Tilehurst, Berkshire, at around 11.30pm on Saturday night (scene pictured above) 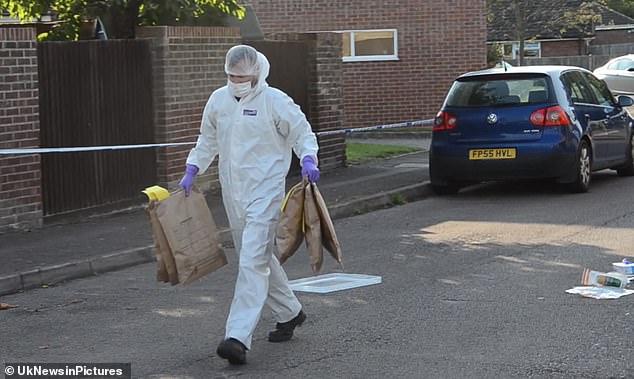 Police confirmed they launched an attempted murder investigation on Sunday, but no arrests have been made and detectives remain on the scene in Lucey Close, Tilehurst (above)

The force confirmed that no arrests have been made and detectives have cordoned off the area where unknown attackers had left the boys for dead.

The suspects fled before emergency services arrived and police officers remain at the scene.

Investigators had identified a man who was seen running away from the scene with others following the attack, who were all described as wearing dark clothing and face masks.

‘Police received a call from South Central Ambulance Service at around 11.29pm yesterday/on Saturday evening to reports that two teenagers, both aged 16 years, had been stabbed by unknown offenders, who have left the scene.

‘One of the victims suffered one stab wound to his chest, and is described as walking wounded, but a second has sustained multiple stab wounds to his chest and shoulder. Both victims have been taken to hospital with their injuries not believed to be life-threatening at this time.

‘No arrests have been made.’

Detective Chief Inspector Mike Hall, based at Newbury police station, said the force were in the ‘very early stages of this investigation’ with a scene-watch in place around Lucey Close in Tilehurst.

He added: ‘Initial investigations have identified a male running away from the scene potentially carrying a knife. It is believed he was running off in the direction of the Cotswold Play Park with a group of other males.

‘All are described as wearing dark clothing and face masks. Additionally upon arrival, a large number of other young people were on the scene. 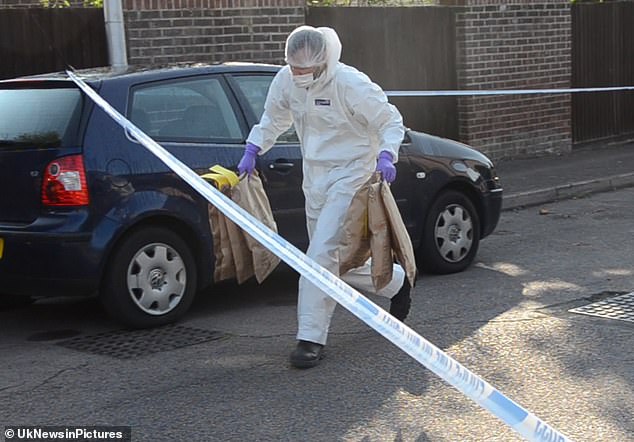 Investigators identified a man who was seen running away from the scene with others following the attack, who were all described as wearing dark clothing and face masks 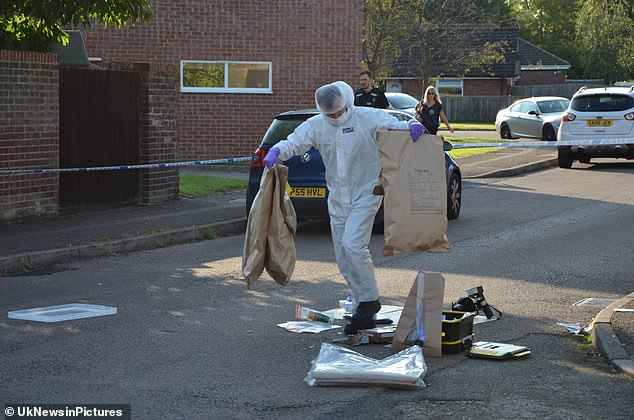 The two teenagers were taken to hospital with non-life threatening injuries. One boy had a wound to his chest while the other suffered multiple injuries to his chest and shoulder

‘We have not identified any suspects at this stage, but are conducting enquires, including reviewing CCTV footage and have a police presence in the area while we investigate this incident.

‘I am aware of the significant concern that this incident will cause in the local community, but I would like to re-assure them that we are investigating this as an utmost priority and our scene-watch will be in place for some time while we try to ascertain exactly what has happened.

‘You will notice an increased police presence in the area while our enquiries continue. Clearly the carrying and using of knives is completely unacceptable, and we will robustly pursue those responsible for this incident and seek to bring them to justice.’

DCI Hall urged anyone with CCTV or camera phone footage to avoid sharing it on social media and instead ‘make contact with police immediately’.

Police have asked anyone with information about the incident to call 101 or make a report online.