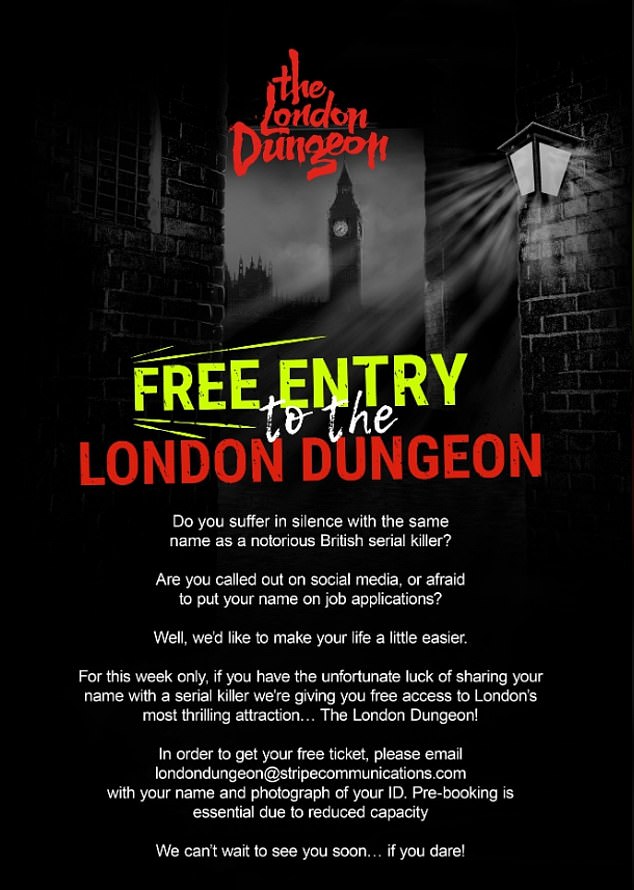 By Emer Scully For Mailonline

The London Dungeon has offered free entry to anyone with the same name as a British serial killer this week.

People unfortunate enough to share a name with the likes of Rose West or Harold Shipman will be able to visit the popular attraction in the UK’s capital for free.

A poster shared on Facebook read: ‘Do you suffer in silence with the same name as a notorious British serial killer? Are you called out on social media, or afraid to put your name on job applications? Well, we’d like to make your life a little easier.’

The attraction introduced the new rule to mark its reopening following coronavirus lockdown. Social distancing measures are in place and tickets must be booked in advance.

It claims to be honouring the plight of Brits who are the namesake of a famous fictional or factual killer.

The London Dungeon has introduced the new rule to mark its reopening following coronavirus lockdown. Social distancing measures are in place and tickets must be booked in advance

Shipman and West help make up the list of names which qualify visitors for free entry – despite both killing within the last 30 years.

Others who can get in free include people called Sweeney Todd or Ted Bundy.

Meanwhile Edinburgh Dungeon hit back against the proposals, with its own idea to allow free entry to anyone with the name William.

A post read: ‘Can you believe what that criminal lot over at The London Dungeon are doing? FREE ENTRY IF YOUR NAMED AFTER A SERIAL KILLER?!

‘Well, we are having none of that! We only reward heroes! Free Entry for anyone named after Wallace, so if your names William, get yourself down to The Edinburgh Dungeon.’

The London Dungeon will offer customers with serial killer names free entry between the 24th and the 31st of August 2020. 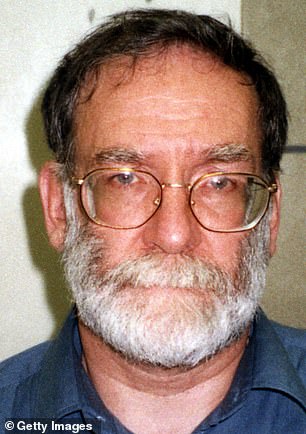 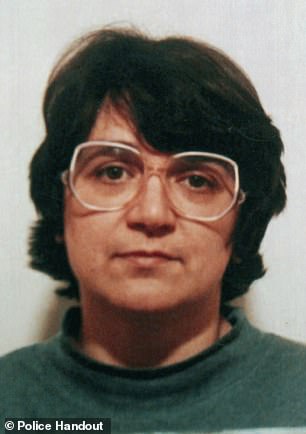 ‘If your name really is Nellie Lovett, Sweeney Todd, or even Ted Bundy then The London Dungeon is opening their doors and inviting you to explore London’s horrible history with your fellow namesake murderers.’

‘Enjoy the Great Fire of London and pay a visit to the plague doctor with Harold Shipman, all with the London Dungeon’s compliments.

‘Lockdown has been tough for everyone, and it can’t have helped ease the misery when introducing yourself on a Zoom call as Rose West.

‘Now we are delighted to welcome all our guests back to see London’s dark past, and we hope they have a truly horrible time – in true Dungeons style….’

But not everyone saw the funny side.

One tweet read: ‘It’s a bit early for jokes about the Wests and Shipman isn’t it?’

Shipman was an English general practitioner who died in 2004. He is believed to have been the most prolific serial killer in modern history.

Mrs West and her husband Fred tortured and murdered at least nine women between 1973 and 1987.

The London Dungeon is on the South Bank close to Waterloo and Westminster station.

Who were some of the worst British serial killers throughout history?

There is no accepted definition of a serial killer, but most criminologists agree that is someone who commits at least two, usually three, murders over a period of time. Here is the grisly list of Britain’s worst… 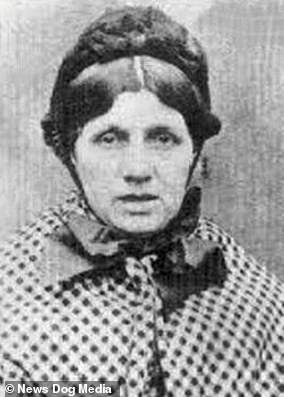 MARY ANN COTTON Housewife (right), said to have poisoned 21 relatives in County Durham, including three of her four husbands, to claim on their life insurance. Hanged in 1873.

JACK THE RIPPER Knifed five women in East London in 1888. He was never caught nor identified, despite various often fanciful attempts to name him.

JOHN HAIGH Fraudster known as the Acid Bath Murderer who killed six people and disposed of their bodies in a bath of sulphuric acid. Hanged in 1949.

GEORGE CHAPMAN Publican born in Poland (right) who poisoned three women with whom he was having affairs in East London. Hanged in 1903.

PETER MANUEL Burglar born in New York who moved to Scotland as a child.Convicted of killing seven. Defended himself in court but hanged in 1958.

IAN BRADY/MYRA HINDLEY Lovers whose torture and killing of five children in Manchester — the Moors Murders — so shocked 1960s Britain. Jailed in 1966.

PETER SUTCLIFFE The Yorkshire Ripper killed 13 women over a decade after repeated failings by West Yorkshire Police. Jailed in 1981.

DENNIS NILSEN Strangled 15 men in his London flat, before trying to dispose of body parts in the lavatory. Jailed in 1983.

THOMAS NEILL CREAM A Scottish-American doctor dubbed The Lambeth Poisoner who killed four prostitutes in London with a possible two more victims in America. Hanged in 1892.