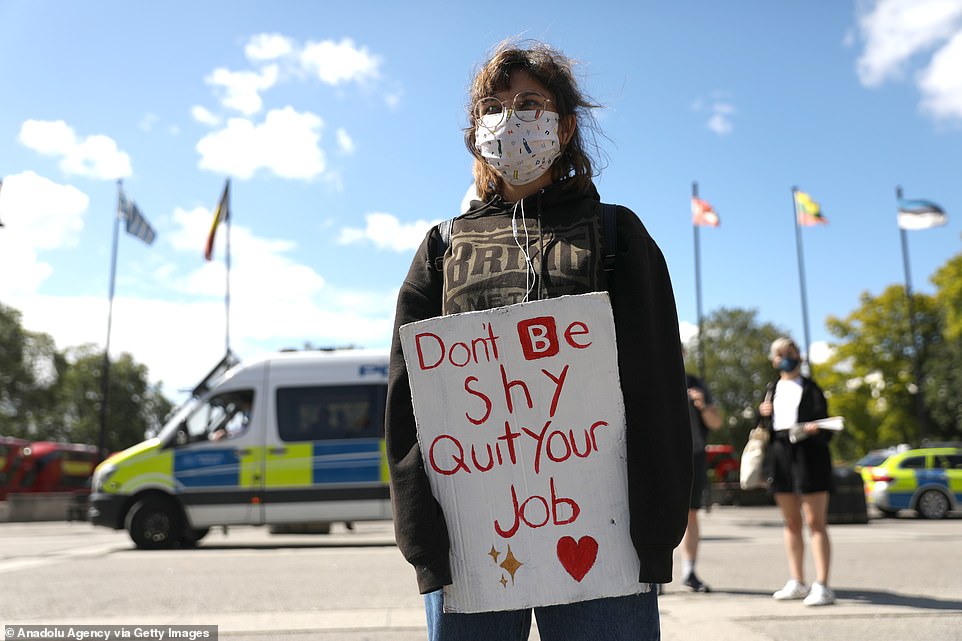 By Josh White Education Reporter For The Daily Mail

The boss of Ofqual threatened to quit unless Education Secretary Gavin Williamson gave his public backing to the embattled exams regulator, it was reported last night.

But believing that Mr Williamson was blaming him for the fiasco, Mr Taylor threatened to quit, according to The Guardian.

Students protested outside Marble Arch Station today over the over the government’s handling of A-level and GCSE results. This protestor’s sign reads: ‘Don’t be shy quit your job’ 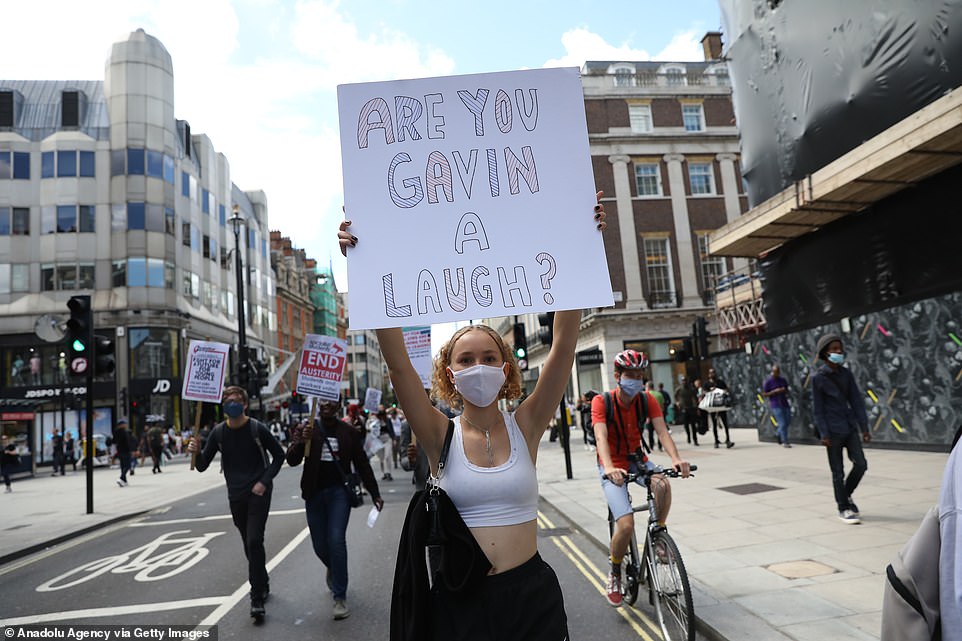 Students who were protesting marched through central London. This protestor’s sign reads: ‘Are you gavin a laugh?’ using the Education Secretary Gavin Williamson’s name to mock how the government has handled the situation 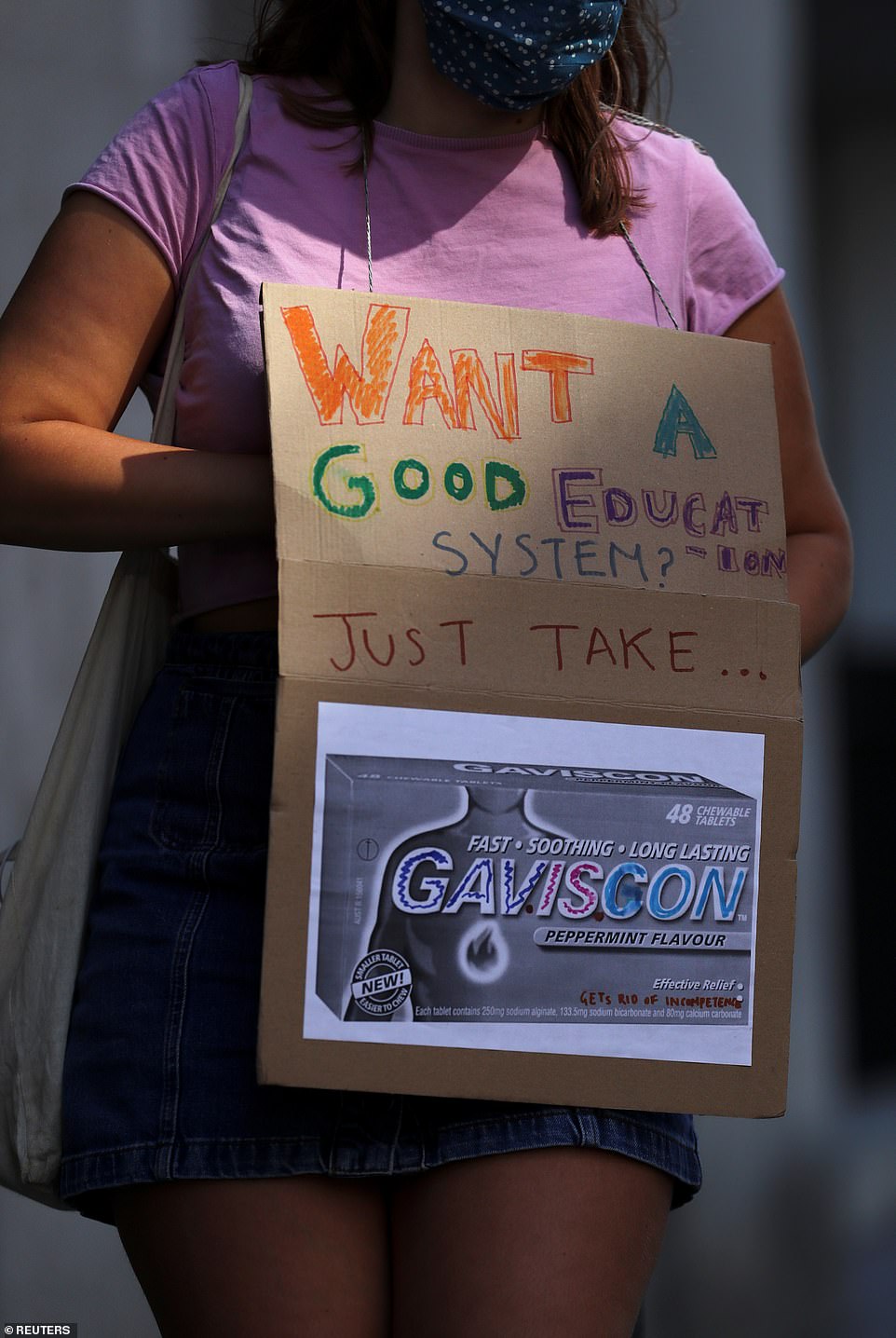 Another sign playing on the education’s name reads: ‘Want a good education system? Just take Gaviscon. Gets rid of incompetence’ 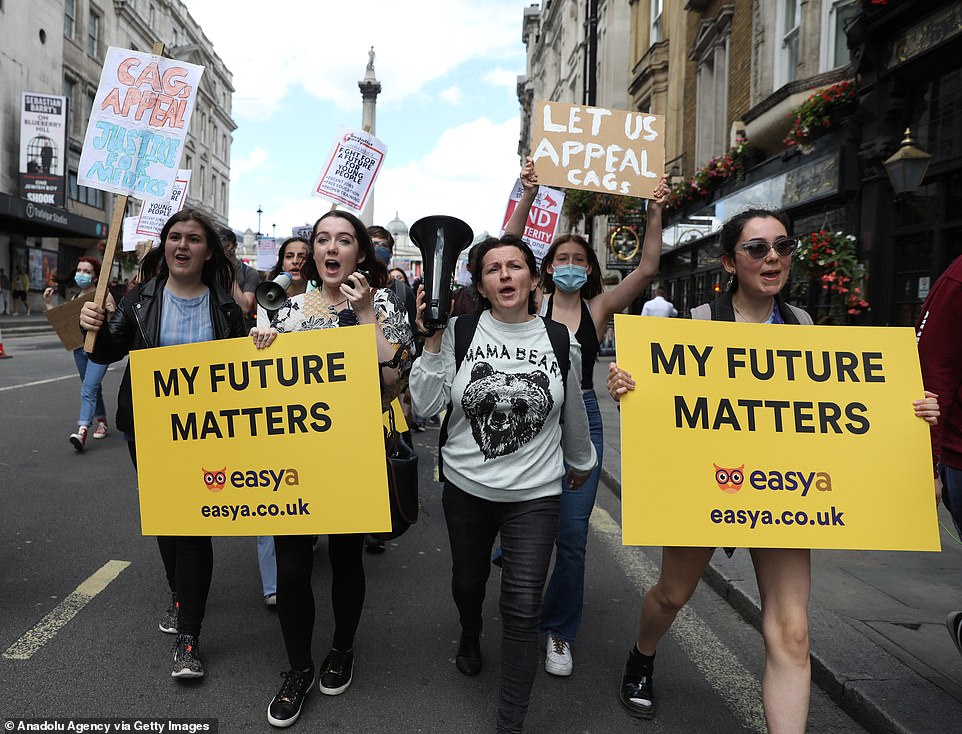 A mother wearing a jumper that reads ‘mamabear’ marches through Whitehall with students. Signs read ‘My future matters’, and ‘let us appeal CAGs’

On Wednesday, he demanded a public statement of support from Mr Williamson, the newspaper reported. It duly arrived, saying the Department for Education had ‘full confidence’ in Ofqual.

The statement also revealed for the first time that Ofqual had decided to pull the plug on standardisation, not Mr Williamson – despite impressions the minister had given in interviews over previous days.

‘The decision they took to move from moderated grades to centre assessed grades was one that we agreed with’, the DfE said. 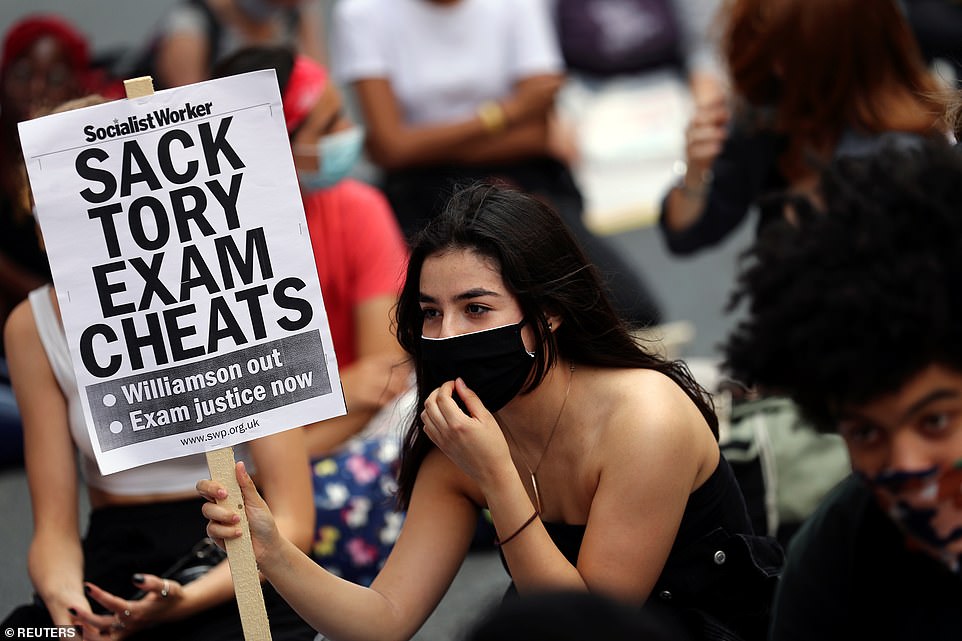 A protester holds a sign, with the logo for the leftist newspaper the Socialist Worker, that reads: Sack Tory Exam Cheats’ demanding that Mr Williamson is fired 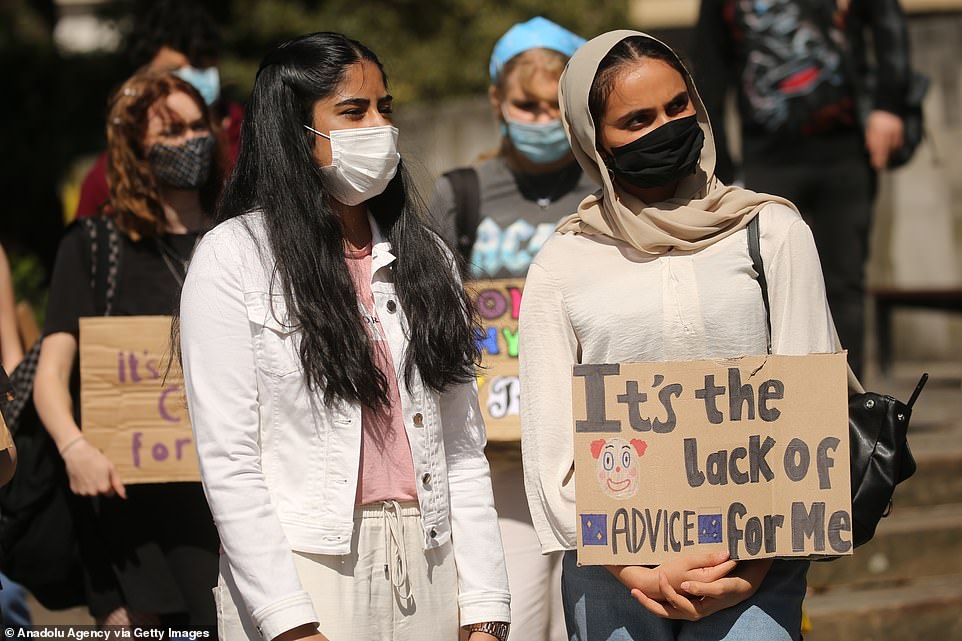 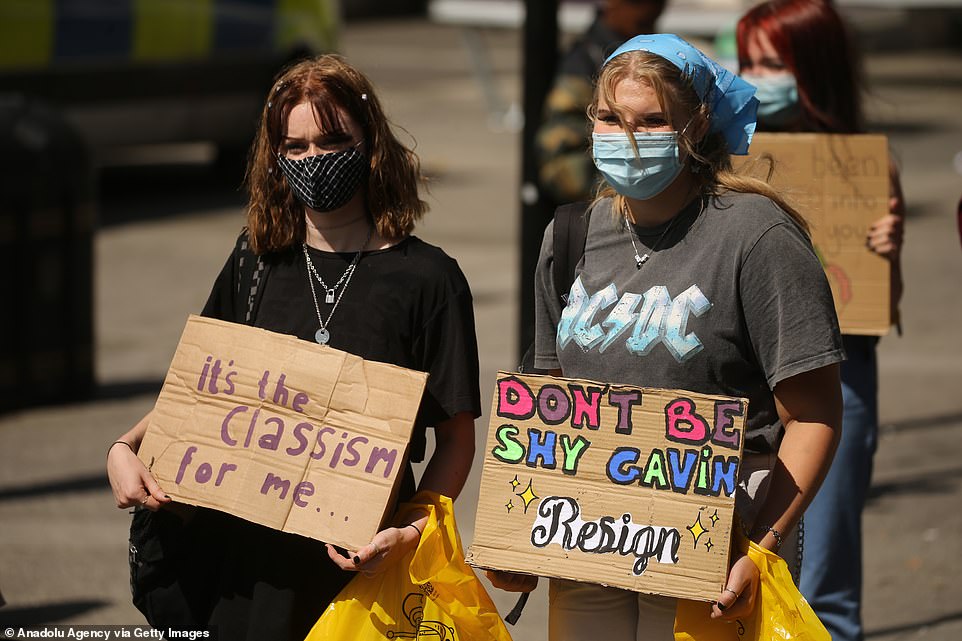 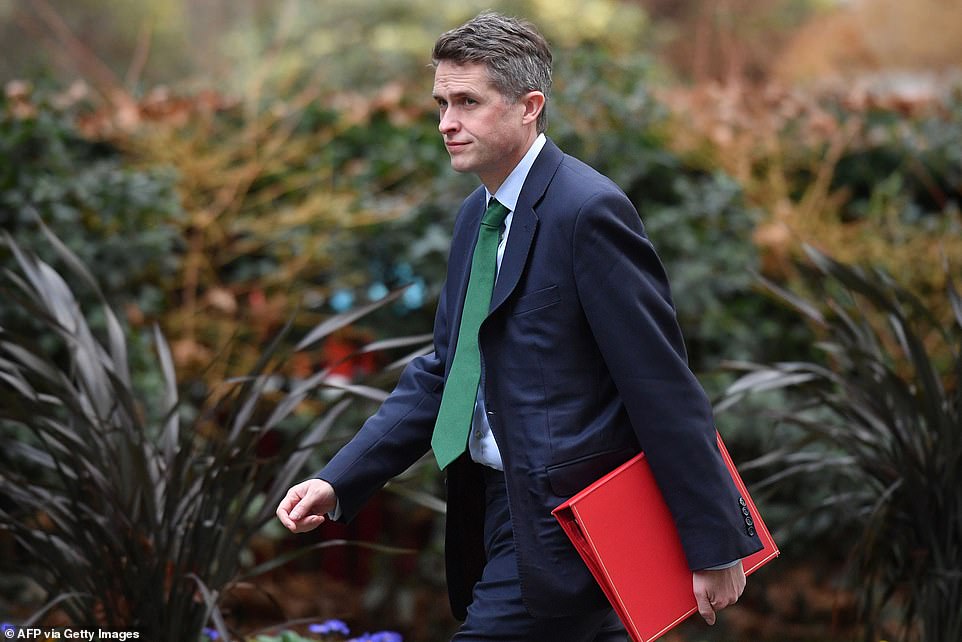 Despite Mr Williamson (pictured) saying he received multiple ‘assurances’, his department were unable to inspect Ofqual’s work until it was released to the public last week 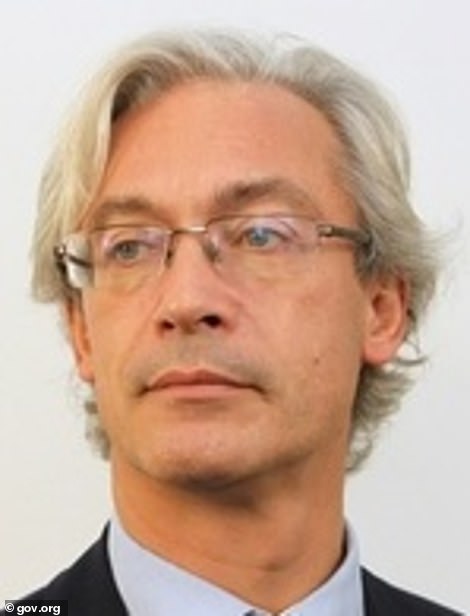 In the immediate aftermath of the crisis Mr Williamson repeatedly refused to declare his ‘confidence’ in the regulator until Mr Taylor reportedly forced him to change his tune.

The first sign that Ofqual would refuse to take the blame lying down came last Monday, after the mayhem of A-level results saw thousands get rejected from their first choice universities.

Rather than announce he was quitting, Mr Taylor apologised but described how ‘Ofqual was asked by the Secretary of State to develop a system for awarding calculated grades’.

The roots of the system lie in a letter which Mr Williamson sent on March 31 cancelling summer exams.

He instructed the regulator to come up with a system that ensured ‘qualification standards are maintained and the distribution of grades follows a similar profile to that in previous years’.

As in Scotland, Ofqual understood this meant they should preserve existing educational inequalities, rather than seek to stamp them out.

Despite Mr Williamson saying he received multiple ‘assurances’, his department were unable to inspect Ofqual’s work until it was released to the public last week. Ofqual did not respond to a request for comment.