The Duke and Duchess of Sussex have volunteered at a back-to-school charity event in what marks their first charity engagement since lockdown.

Pictures show the couple handing supplies in through the windows of vehicles at Dr Owen Lloyd Knox Elementary School in South LA on Wednesday.

The couple cut casual figures, with Meghan sporting loose khaki shorts with a white shirt and trainers, and Harry going for a similar look plus a baseball cap.

The Duke, 35, and Duchess of Sussex, 39 (pictured), volunteered at a back-to-school charity event in Los Angeles on Wednesday 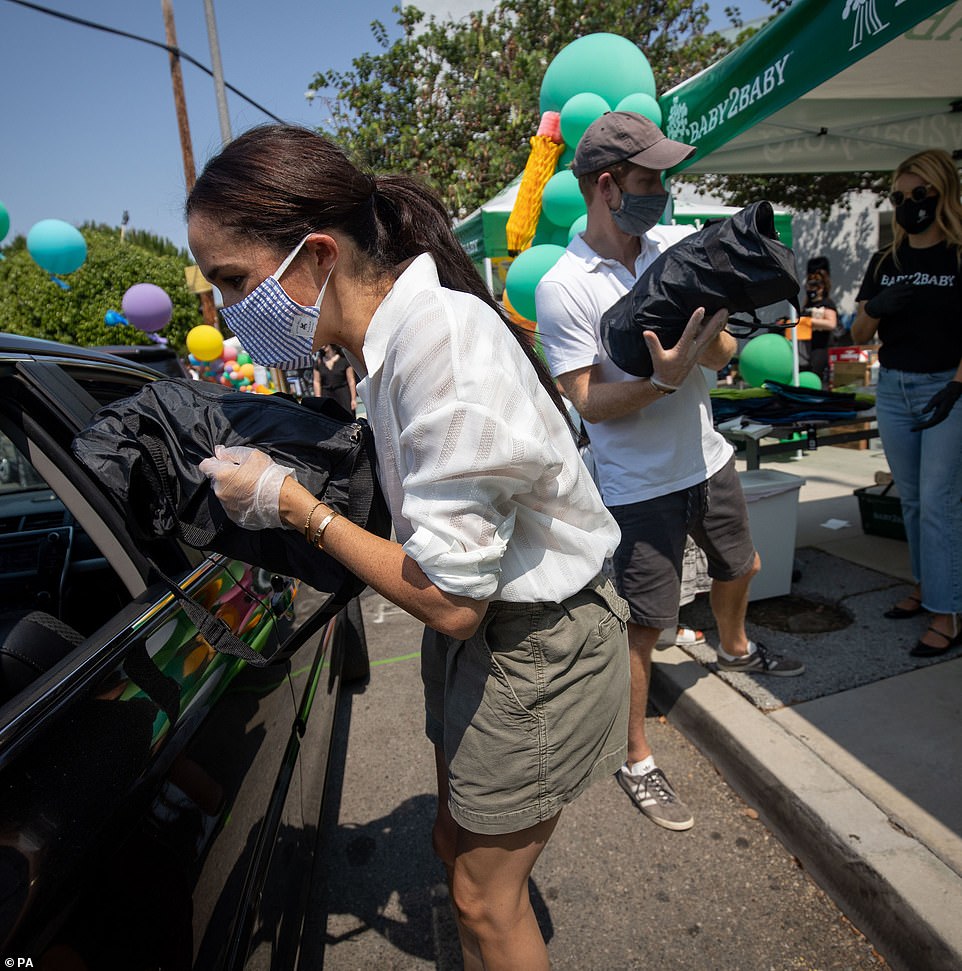 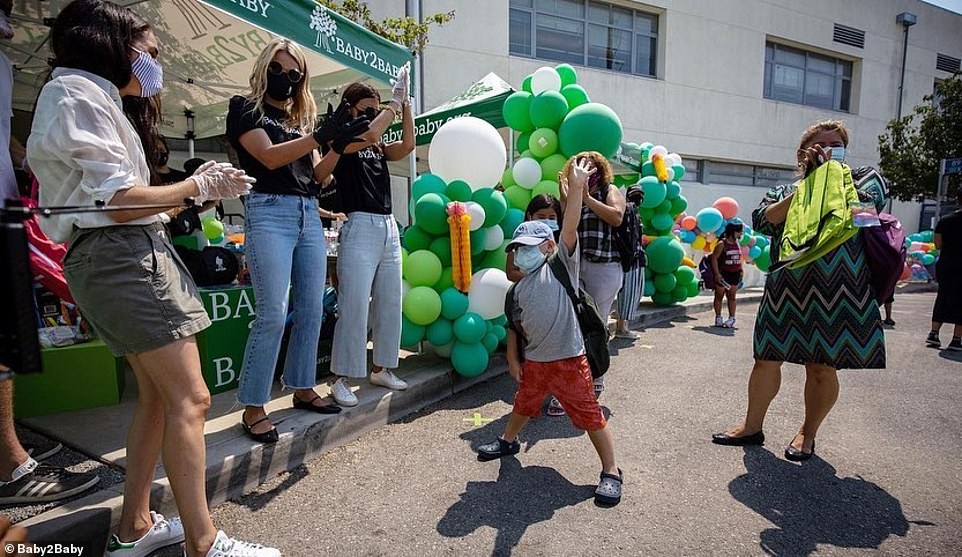 A masked Harry and Meghan have been handing out school supplies, clothing and nappies to families in need at a drive-thru event in Los Angeles. Organised by charity baby2baby

The volunteering comes after it emerged the couple had bought a property in the celebrity hotspot of Santa Barbara for a reported £11 million.

The couple had been house-hunting for some time after relocating to the US from Canada just before the coronavirus lockdown.

Harry and Meghan plunged the royal family into a period of crisis when they announced earlier in the year that they wanted to step back from their positions as senior royals and become financially independent.

A summit of senior royals was convened by the Queen at Sandringham to discuss the issue, with Harry sitting down for talks with his grandmother, the Prince of Wales and the Duke of Cambridge. 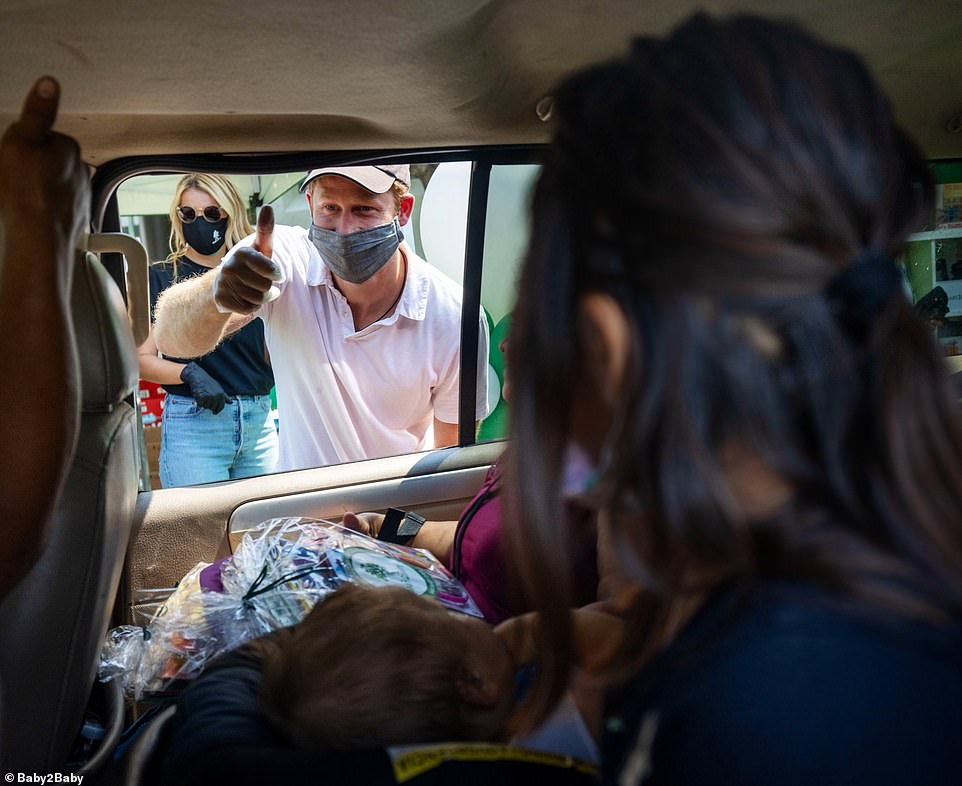 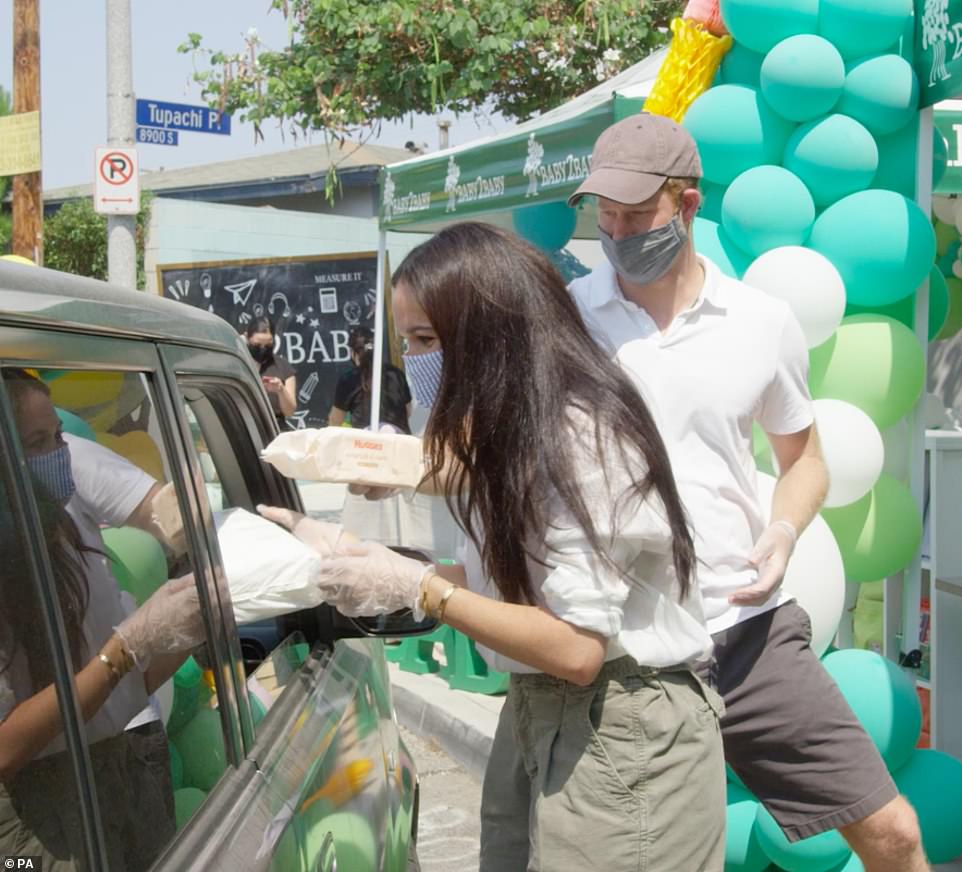 Meghan Markle opted for loose khaki shorts with a white shirt and trainers, while Prince Harry donned a similar look plus a baseball cap

It was later announced they would no longer be working members of the monarchy, would split their time between Canada and the UK, with the majority in North America, and no longer be known as HRH.

Meghan’s appearance comes a day after she made a bold plea to women across the US to take part in the upcoming presidential election, speaking out about the need for ‘change’ at an online voter summit, while telling participants: ‘If we aren’t part of the solution, we are part of the problem.’

The 39-year-old made her stance on the 2020 presidential race incredibly clear when she addressed viewers at the When All Women Vote Couch Party – an online event organized by non-profit organization When We All Vote, which was founded by ‘her friend’ Michelle Obama.

Appearing as the opening speaker at the summit, Meghan expressed her ‘excitement’ at taking part, before telling those involved with the organization: ‘We need [your work] now more than ever.’

‘I’m really thrilled that you asked me to be a part of this,’ the mother-of-one began, adding: ‘I think this is such an exceptional time [and I am] happy to be here for my friend Michelle Obama’s When We All Vote, and to kick off the When All Women Vote Couch Party.’ 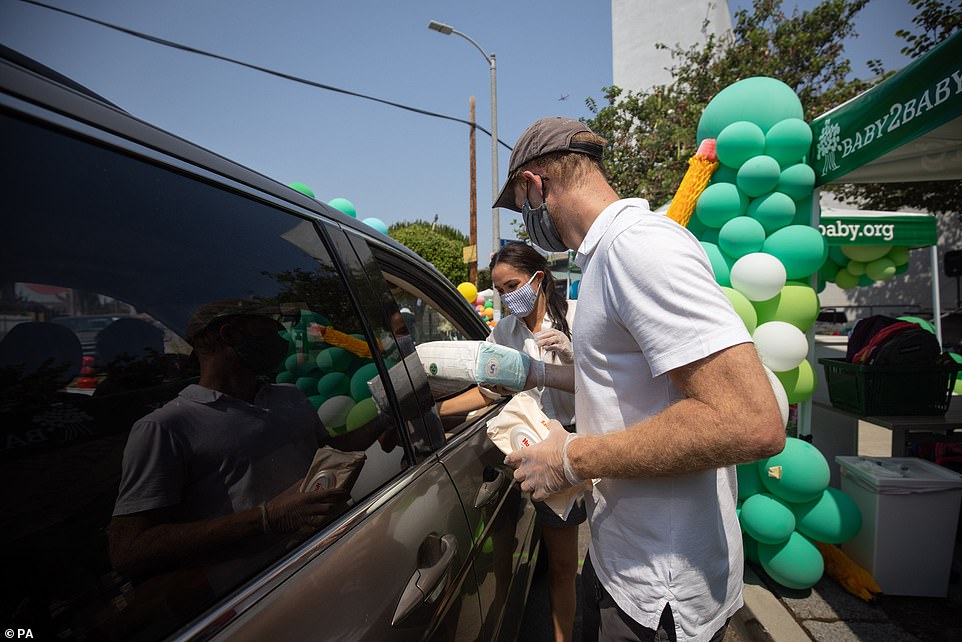 Baby2Baby provides basic necessities like diapers, wipes and clothes, to kids and families in need and has distributed over 30 million critical items to hundreds of thousands of children across the US since March. Pictured, Prince Harry and Meghan Markle

Speaking directly to the volunteers and workers tuned into the summit, Meghan continued: ‘It is fair to say that we are all very grateful for your work because we need it now really more than ever.’

Just days earlier, the Duke and Duchess of Sussex joined a video call with young leaders from the Queen’s Commonwealth Trust, which was later shared on the QCT YouTube channel.

Both Meghan and Prince Harry spoke adoringly of the Queen, 94, whom they referred to as ‘grandmother’ during the video call, weeks after their rift with the Royal Family was laid bare in their explosive biography Finding Freedom.

Meanwhile the couple also gushed over the Commonwealth with Meghan saying she felt ‘incredible pride’ at being able to work with the QCT, revealing: ‘[Young people from across the Commonwealth] come with a question, they always offered a solution, and that’s what I think is so inspiring and why I’m incredibly proud to be able to work with the QCT, but why it’s the continuation of the legacy of your grandmother.’

Their loving comments for the organisation and the Queen come after the couple faced criticism for their last conversation with the group, in which they appeared to take a swipe at the British Empire by saying the history of the Commonwealth ‘must be acknowledged’, even if it’s ‘uncomfortable’.

The Duchess also spoke out about the impact of social media, saying: ‘ ‘When you look at what these platforms are capable of with that reach, and what that propels in terms of trolling… You can either train people to be cruel, or you can train people to be kind. It’s really that simple.’