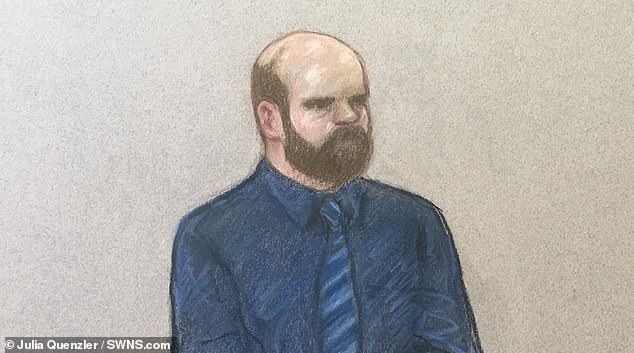 A sheep farmer has today been found guilty of blackmailing Tesco for £1.5 million after lacing jars of baby food with razor sharp shards of metal.

Two mothers found the fragments when they were feeding their children after Nigel Wright, 45, began his two-year campaign in the spring of 2018.

The married father-of-two, who now faces up to 14 years in jail, threatened to inject tins of fruit with cyanide and salmonella unless the supermarket giant handed over the cash in Bitcoin.

Nigel Wright has been found guilty of blackmailing Tesco for £1.5 million after lacing jars of baby food with razor sharp shards of metal

Wright signed off his emails and letters ‘Guy Brush & the Dairy Pirates + Tinkerbell the naughty fairy,’ and claimed he represented dairy farmers who had been underpaid by Tesco.

He triggered two nationwide recalls on both Cow & Gate and Heinz baby food as a result of the threats, prompting the supermarket to clear 140,000 products from the shelves.

A detective posed as a Tesco employee named Sam Scott and handed over £100,000 in the crypto-currency to trap the blackmailer.

Wright was caught on CCTV buying wine and flowers for his wife after placing a contaminated jar on the shelves of a Lockerbie branch on November 29 last year.

He also placed two jars of contaminated food on the shelves of a Rochdale shop.

Scottish mother Morven Smith ‘felt sick’ when she spotted the shards in a jar of Heinz sweet and sour chicken her ten-month-old son was eating.

Mrs Smith, from Lockerbie, had already fed a few spoonfuls to her baby when she spotted a shard of metal in the bowl in December 2019.

She said: ‘I took the bowl out of the microwave – I gave my son a couple of spoonfuls and noticed something shiny – I pulled it out with my fingers at that point. 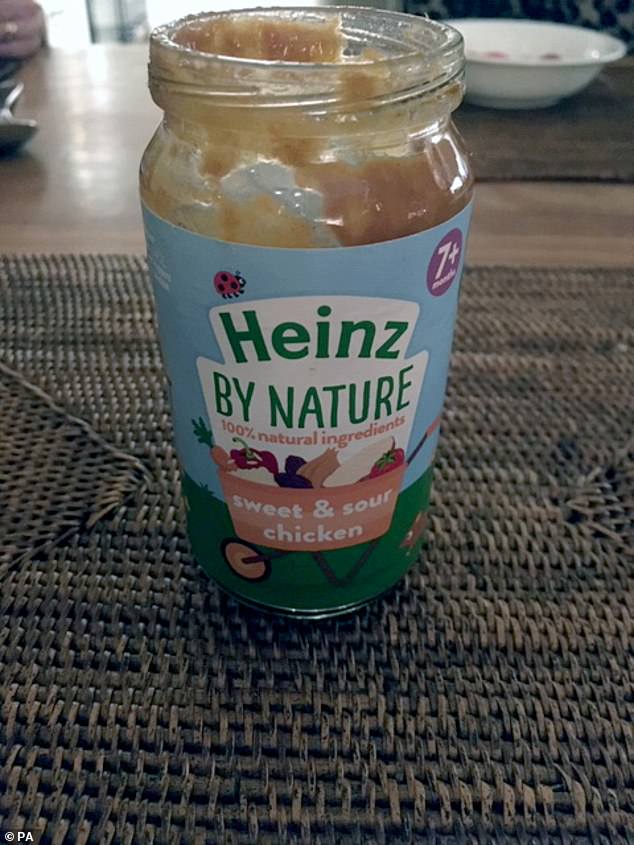 ‘It was horrendous. I felt sick I was so shocked.’

Her husband found a second piece of metal at the bottom of the jar.

The incident led to a nationwide recall of 42,000 tins of the product.

She wept as she told the court how she had been moments away from feeding them to her nine-month-old daughter.

‘I put it into a bowl and when I went to microwave it there was a metal chipping in there and at first I didn’t think anything of it. I binned it,’ the mother said.

‘But then [on a separate occasion] I opened a second jar, Heinz Cheese and Tomato Pasta Stars.

‘Again I saw the metal chippings inside it.’

He believed he could ‘get rich’ without leaving any trace of his identity by using the bitcoin cryptocurrency and downloading the browser Tor allowing for anonymous communication.

But his emails and letters were forwarded onto police and he was soon unwittingly interacting with an undercover officer.

A draft of an email to Tesco was found on one of Wright’s devices after his property was searched.

The threat read: ‘Imagine a baby’s mouth cut open and blood pouring out, or the inside of their bellies cut and bleeding. You pay, you save them.’ 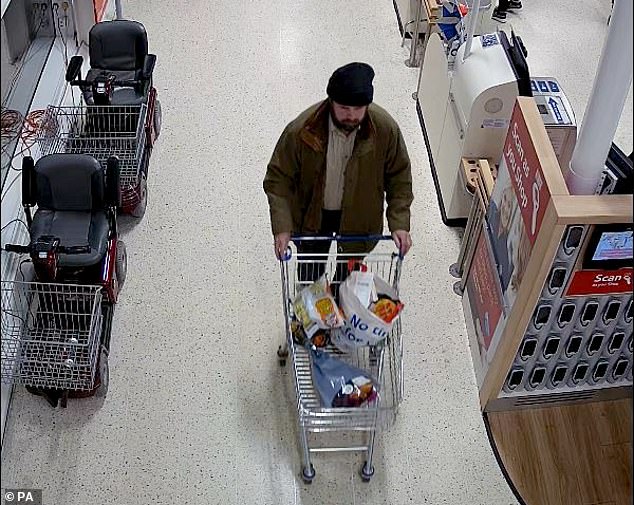 CCTV footage showed Wright in a Tesco store in Lockerbie, where he planted a contaminated jar

Reading excerpts of emails sent by Wright, the prosecutor said: ‘Dear Sam, we have been polite and courteous as we recognise you’re just an employee who goes home at the end of the day. We say you pay us then we will email you.

‘It appears we both failed to do what we said we would. If you set up a bank account you can purchase bitcoin and transfer them into our account.

‘As a goodwill gesture we will tell you you have eight jars of Cow & Gate baby food left on your supermarket shelves on Tuesday 21 and Wednesday 22 [January] there were only six jars left so only six potential dead babies.’

Wright admitted sending the emails and letters to Tesco demanding the money but told jurors he was forced to by a gang of gypsies.

He claimed the travellers had come to his farm and threatened to kill his children and rape his wife unless he paid them £500,000.

Asked why he ordered the company to pay him triple that amount, Wright said: ‘I’d seen somewhere that ransoms are never paid in full, only half are paid.’

He said that he had been handed the contaminated jars by one of his alleged handlers, who followed him to the Lockerbie store in a BMW to make sure he carried out their orders.

But he admitted his threats to the company had been inspired by his own research, watching documentaries and searching for ideas on Google. 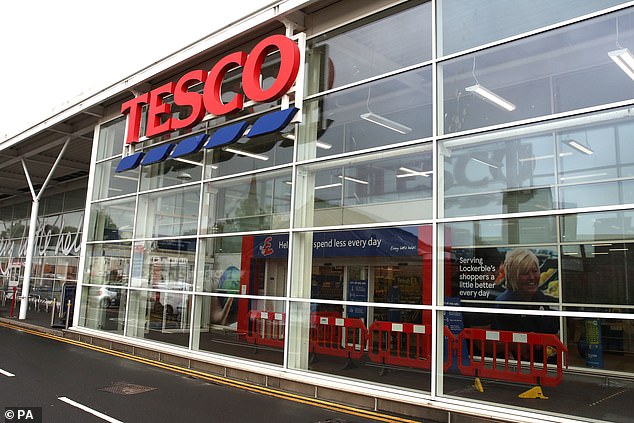 The farmer told jurors he had also experimented with tampering with jars himself, while maintaining he had only done so because he was ‘curious’ to see if his threats had been ‘idle.’

Asked why he had failed to tell police about the travellers, Wright claimed: ‘I’ve been to police in the past and they’ve failed me.’

He complained that the stress of the blackmail campaign had landed him in marriage counselling with his primary schoolteacher spouse.

Tearfully, Wright told jurors: ‘My wife would have been really scared.

‘If I’d told her she would have probably gone to the police and I would have got into trouble.

‘I was on edge this whole time.

‘I should never have got involved and I should have gone to the police.’

But prosecutor Julian Christopher QC told him: ‘The truth is you were not in fear at all.

‘You were carrying on your life normally while hoping to make yourself rich by threatening Tesco in this way while endangering the life of others in the process.’ 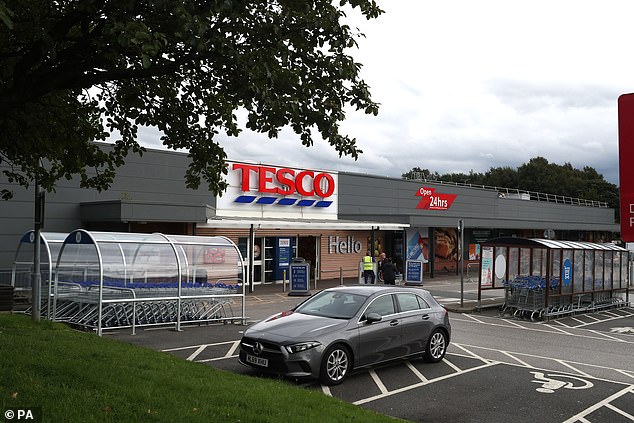 A jury deliberated for four hours and 33 minutes to find Wright guilty of two counts of contaminating goods and three counts of blackmail for demanding cryptocurrency from Tesco in exchange for revealing where the contaminated food had been placed.

He was also convicted of a further charge of blackmail for allegedly demanding £150,000 worth of bitcoin from a driver with whom he had had a road rage altercation.

Following the incident on the A46, the driver withdrew his complaint after receiving a ‘nasty anonymous letter’.

Wright stood in silence as the guilty verdicts were announced.

The maximum term for blackmail is 14 years while the maximum for contaminating goods is 10 years.

Mr Justice Warby listed the case for sentence on September 28 and asked for a psychiatric report on Wright to be prepared ahead of the hearing.

He warned the defendant he faced a ‘lengthy custodial sentence’.