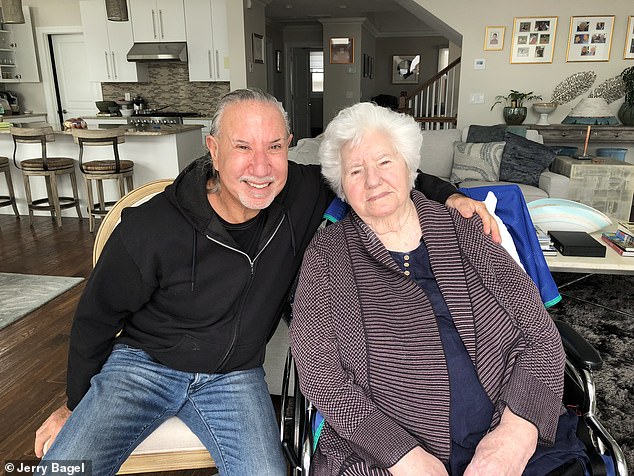 An author has given a powerful insight into what it was like growing up in the generation of children whose parents survived the Holocaust.

Jerry Bagel, 67, from New Jersey, explains in the foreword of his new book The Numbers on My Parents’ Arms that as a child, his bedtime stories were horrific tales from his parents’ time at Auschwitz-Birkenau.

He also reveals how he learned to count by using his parents’ concentration camp tattoos, and was told how his father lost a testicle during medical experiments by the Nazis.

The author said that his parents’ struggles meant they put even more pressure on him to be successful, and told how his parents said they’d ‘kill themselves’ if he did not marry a Jewish woman, which he did in the 1980s.

The Numbers… is a striking retelling of the Holocaust using the stories his parents told him as materials, as well testimony from other survivors who opened up to Bagel about their most painful memories.

Speaking to Femail, Bagel, now a physician and professor, told of his upbringing in the shadow of his parents’ trauma, saying he had ‘felt impelled for many years to share this story out of not only Holocaust significance but also human interest.’

Jerry Bagel, 67, from New York, explains in the foreword of his book The Numbers on My Parents’ Arms that his parents would often tell him horrific stories from their time at Auschwitz-Birkenau during the Holocaust 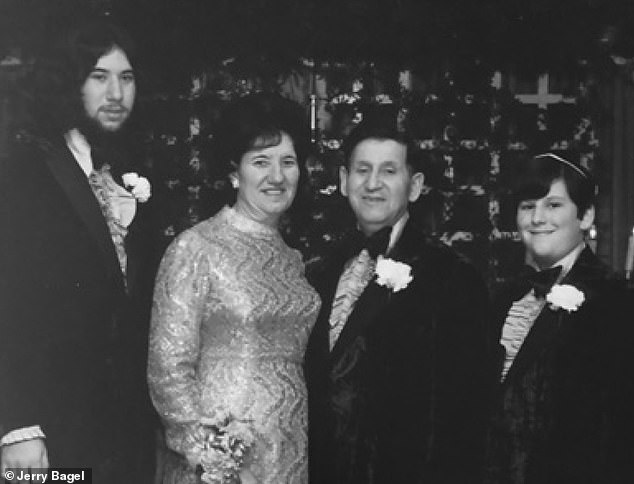 Jerry, aged 20, with his parents Helen and Sam Bagel at his brother’s Bar Mitzvah in February 1973

His mother, Helen, who sadly passed away a week ago, lost her sisters, parents and cousins in the camps. His father, Sam, who was married before the war, lost his wife and young child as well as all his brothers and parents.

Sam and Helen Bagel changed their name upon immigrating to the United States, and the book addresses them as their birth names. Sam is Szlama and Helen is Chaja.

The Numbers… follows the couple from their lives before the war to their time in the camps and after Europe was liberated until their move to the US.

Bagel admitted he grew up feeling ‘ashamed’ of his parents, due to their thick accents and the fact they barely spoke any English, preferring to speak Yiddish at home.

He was as young as seven when his parents started telling him stories about Auschwitz before he fell asleep at night. 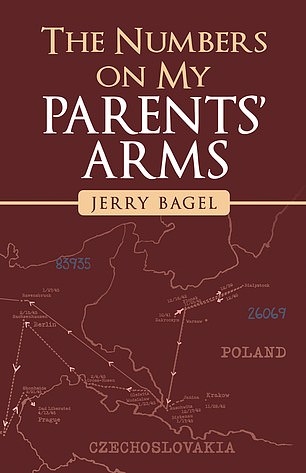 The Numbers on My Parents’ Arms, by Jerry Bagel, is published by iUniverse

‘So, my bedtime goes like this,’ he said, ‘My mother would say “I had a beautiful sister named Peyru, and they put me to the right and they put her to the left with my mother, and she said ‘I’ll never see my sisters again”.’

This scene is recounted in the book, when Chaja and her family undergo ‘selektion’ upon their arrival at Auschwitz-Birkenau, the process by which SS soldiers would pick the men and women strong enough to work and destined the old and weak, mothers and young children to the gas chamber.

‘While other kids fell asleep to stories about bunnies and trains, my parents were telling me almost everything about what their lives had been like in Poland,’ he recalled.

‘My bedtime stories contained all the fantastical elements of the most frightening fairy tales. Like in Hansel and Gretel, an evil entity was attempting to lure innocent children into a scorching red oven. 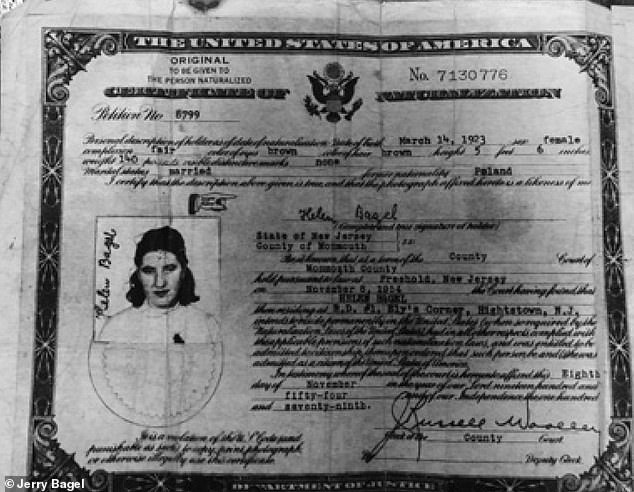 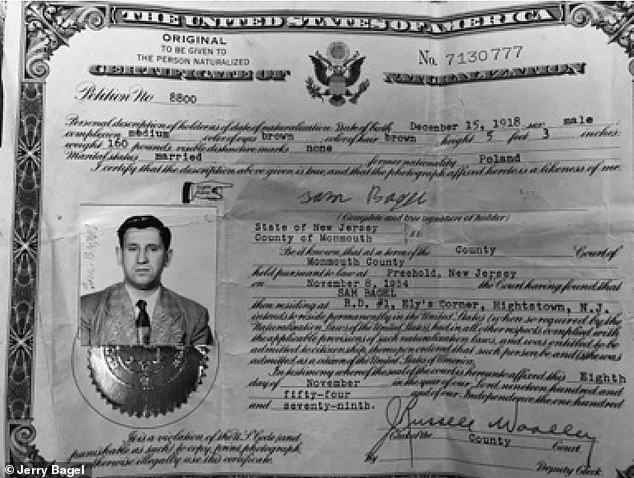 Pictured: Helen and Sam’s documentation when they reached the US and changed their names after the war

‘But my parents’ tales weren’t mere words in a book, ending the way a child’s last words before bed should end—with a happy ending and a good night kiss. The characters in my parents’ stories did end up in the oven. And even more terrifying, they were my family.’

In another instance, Chaja told Jerry that she witnessed a baby being torn in half in front of his horrified mother.

‘The nonplussed officer reached forward to grab the baby. Before he could touch it, the woman swatted his gloved hand away and clawed his face. Enraged, the officer clubbed her to the ground, simultaneously grabbing the baby by its clothing,’ Jerry wrote in The Numbers…

‘He carried the wailing baby at arm’s length, as if it was a piece of stinking garbage, turned it upside down with one tiny foot in each of his fists, and ripped the baby in two pieces. 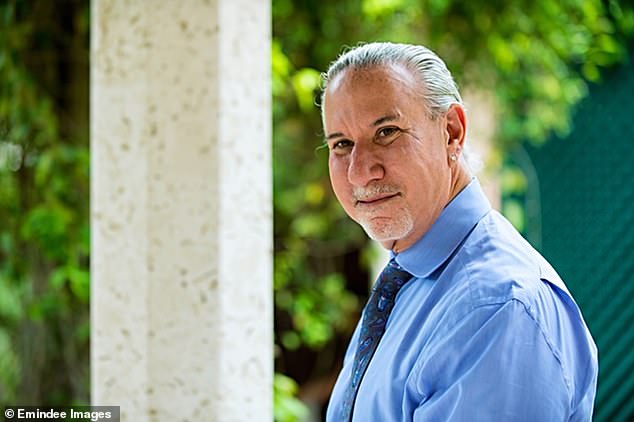 ‘Holding his gruesome trophy by its feet as blood dripped onto the snow, the guard sang a song about the blood of the Jews. The nearby dogs became excited by the smell of blood and began barking, their growls drowned out by the shrieks of the baby’s mother.

‘The guard threw the flesh on the ground, marched back to the hysterical mother, and continued clubbing her.

‘This is the moment Chaja lost her faith in God,’ Jerry concluded.

Chaja faced unimaginable horrors in the camp, where she stayed a year. After the death of her mother and young sister Peyru, she had her other sister and her cousin by her side.

However, when her sister took ill and was killed by the Germans, Chaja lost her will to live and grew suicidal.

In the book, Bagel recounted how many women were driven to suicide and tried to taken their own lives by jumping on the camp’s electrical fences. 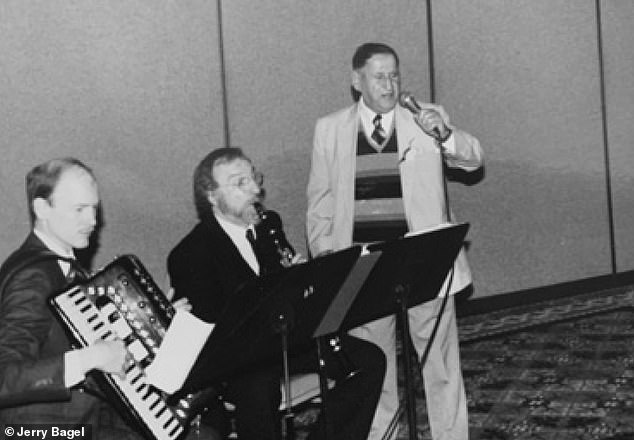 Meanwhile, his father Sam survived the camps by volunteering to do all the physical jobs the German would need Jewish prisoners to take on.

Bagel reveals in the book that while Sam was among the men who were selected to be castrated and studied.

As part of Nazi plans to keep Jews from procreating, thousands of men and women were castrated in the camps, often using radiation, or more barbaric techniques such as the ablation of their private parts.

Infections were common place after such procedures were performed and many men did not survive.

WHAT WAS THE AUSCHWITZ CONCENTRATION CAMP?

Auschwitz was a concentration and extermination camp used by the Nazis during World War Two.

The camp, which was located in Nazi-occupied Poland, was made up of three main sites.

Auschwitz was an extermination camp used by the Nazis in Poland to murder more than 1.1 million Jews

Birkenau became a major part of the Nazis’ ‘Final Solution’, where they sought to rid Europe of Jews.

An estimated 1.3 million people were sent to the camp, of whom at least 1.1 million died – around 90 percent of which were Jews.

Since 1947, it has operated as Auschwitz-Birkenau State Museum, which in 1979 was named a World Heritage Site by Unesco.

Since 1947, it has operated as Auschwitz-Birkenau State Museum, which in 1979 was named a World Heritage Site by Unesco

While Bagel said his father never spoke of it, he confirmed in the book that Sam had lost one testicles during German experimentation.

Growing up in the US to two parents who did not speak the language well and would only speak Yiddish at home, Bagel admitted he resented his parents for being ‘different.’

He recounted instances where, as a teenager, he would keep them from attending school functions because he was ashamed of them.

He also opened up about his stern upbringing, revealing that his father would sometimes employ corporal punishments if Jerry disobeyed as a child.

In spite of these harrowing experiences and having to share into his parents’ trauma, Bagel said writing The Numbers… helped him to reconnect with his father, who passed away in 1991.

He also said in his mother’s eulogy that in spite of the traumatic experiences she endured at the camps and later in life, Helen was able to live a life full of happy moments. 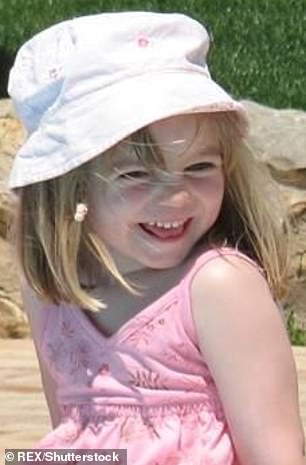 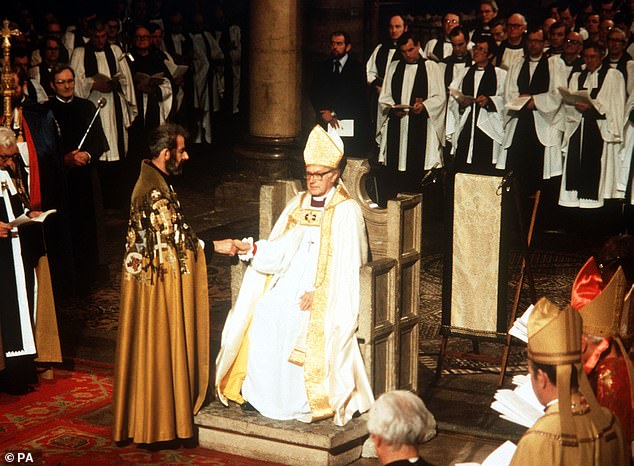 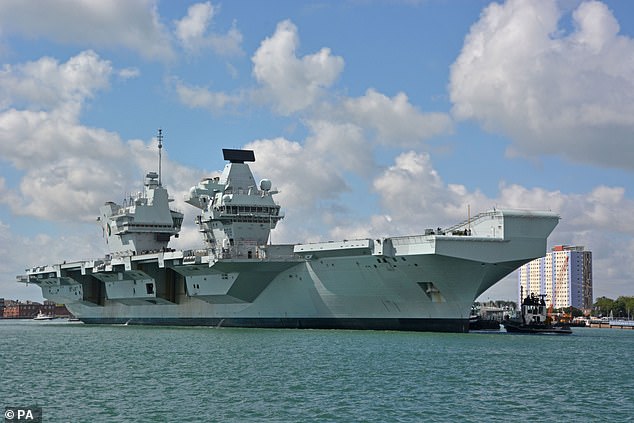 JOHN HUMPHRYS: Faced with today’s China, our aircraft carriers are as useful as a terracotta army