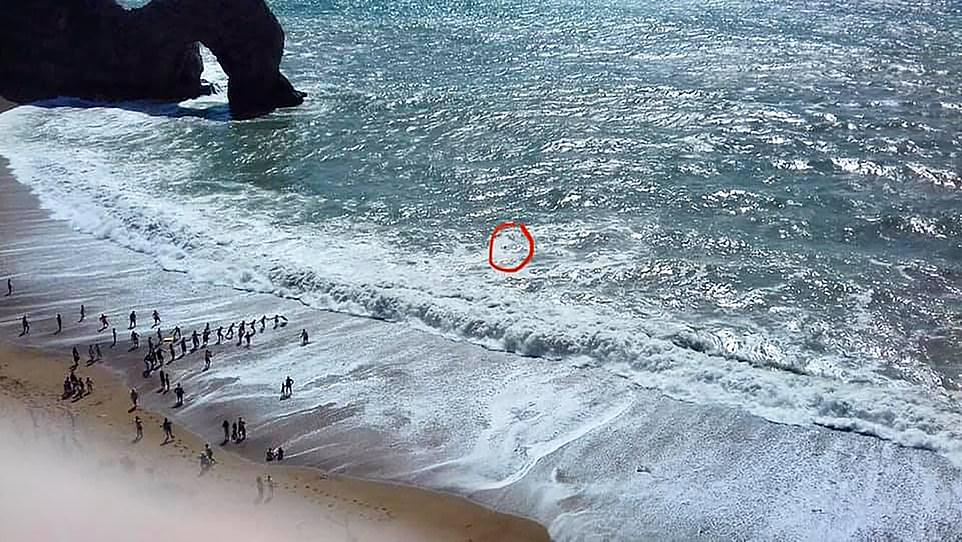 This is the moment beachgoers formed a huge human chain to drag two people to safety in a dramatic rescue at Durdle Door.

A swimmer had been in the water at the foot of the Dorset landmark when he began to struggle against the mounting tide.

He tried to swim back to the shore but was halted by exposed 20mph winds and enormous waves that rose well over his head.

The man, believed to be aged in his 30s, began frantically waving and shouting for help towards sunseekers on the shingle beach.

After initially thinking he was waving, about 30 people rushed to the water’s edge and linked arms.

Their attempts were not helped by a huge mass of frothy white foam that was created by the enormous waves crashing into the shore.

Before finally making it to the stricken swimmer, rescuers attempted to throw a body board and a lifeguards’ rope out to him.

In one particularly dramatic moment, a beachgoer tried to run out to the man himself but he too was blown away by the wind.

After a battle of around two minutes, those within the chain were able to reach both casualties and bring them safely back to the beach. 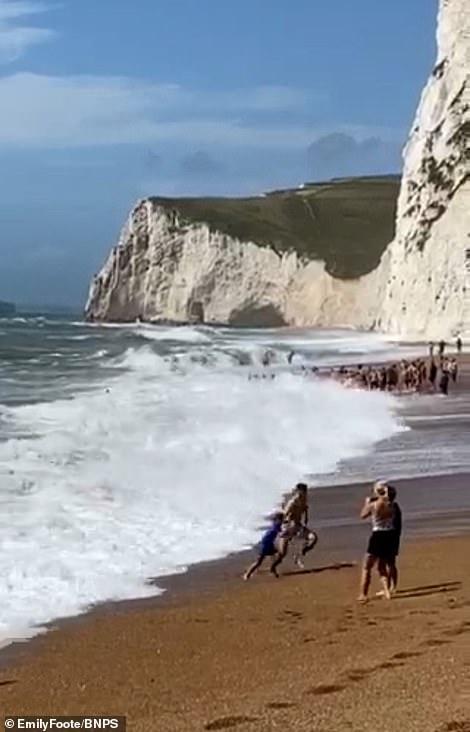 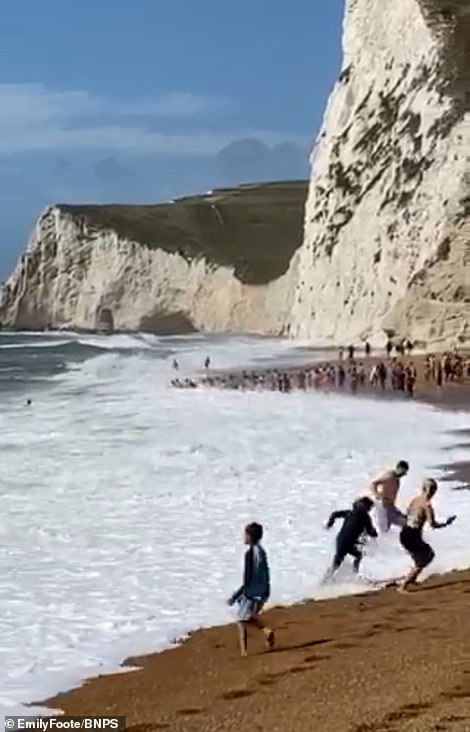 People at Durdle Door formed a human chain to rescue the two men from the sea. Pictures show the crowd organising themselves to safely carry out the rescue

Eye-witness Emily Foote, 27, a teacher from Bridport, said: ‘We got there at about nine in the morning and this guy had been in and out of the water quite a few times throughout the morning.

‘He seemed to know what he was doing and was probably about 50ft out for the most part.

‘At around midday the winds picked up and that’s when he started struggling.

‘He managed to get closer and was pretty much just at the point where the waves broke but he couldn’t get back.

‘Every now and then there was just a freak wave that stopped him getting back and he ended up just frantically waving for help.

‘Loads of people just sprinted to the sea and formed this chain but they were being battered by the waves too.

‘The foam was like a washing machine and at one point I thought we were going to end up with 10 casualties in the sea rather than just one.’

She added: ‘They tried throwing things out to him but they kept being blown back and one guy even attempted to run straight to him with a buoyancy aid on a string.

‘He ended up going under the water himself and had to be rescued as well as the swimmer.

‘People kept being knocked back and by the end there were probably about 30 people trying to help. 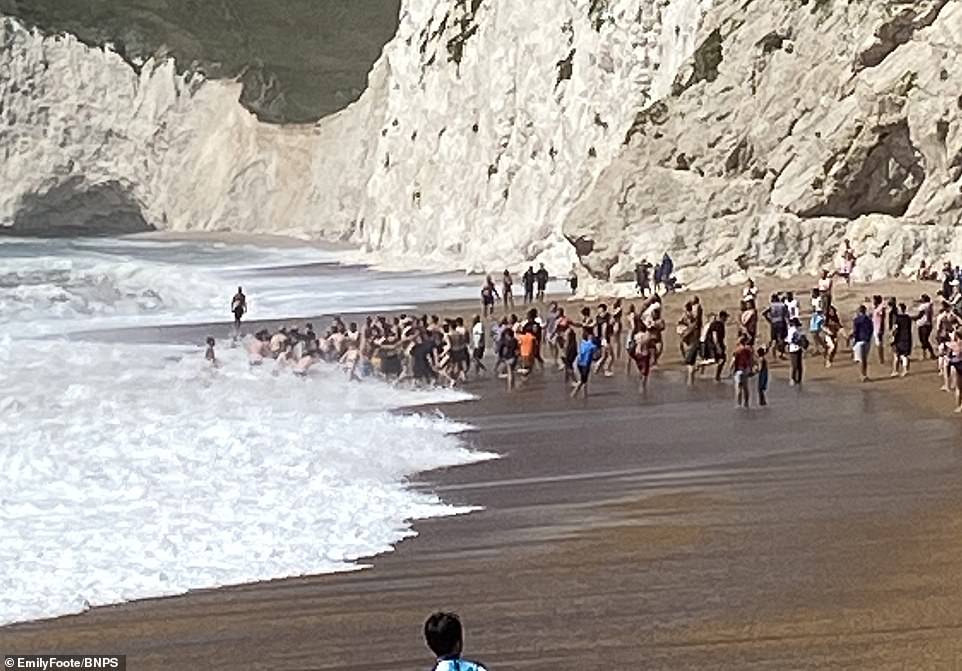 Around a hundred people gathered to join the human chain. The entire beach applauded once the two men were safely brought out of the water 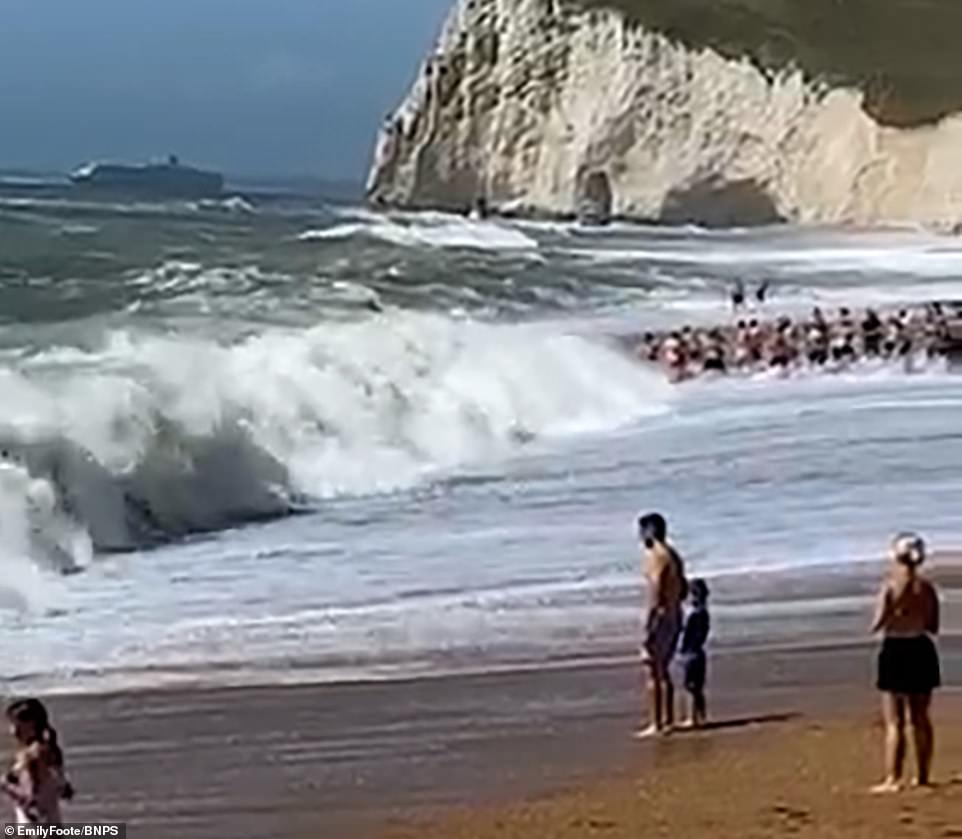 Huge waves crashed onto the beach, towering over the people trying to get out into the depths to rescue those who needed help after finding themselves trapped by strong tides

‘With every attempt they got a little bit closer and were finally able to reach him.

‘The whole beach applauded when the two men got back and they didn’t need any help from paramedics or anything like that.

‘I’ve never seen the beach like that and full credit has to go to everyone who risked their own lives to save the swimmer.’

Jeanette Warren, from Portsmouth, Hants, said: ‘He was confidently swimming for some time until an awful gust came and literally swept him so far out.

‘He was actually very good, staying calm and then giving it his all to swim with the waves.

‘A small crowd quickly became a very large crowd and people on land began to realise he was in distress.

‘They formed a huge human chain and someone had a life float.

‘They passed it along and threw it out to him. It was certainly a nail biting and distressing scene to watch.

‘The cheer when all had reached land safely was a total relief.’

Holidaymaker Jennie Bell, from Halifax, West Yorks, said: ‘There were some brilliant people on the shore, who were shouting to this person in the sea “swim now with this wave”.

‘The next thing we know there was this chain of people on the beach stretching into the sea, as much as they dared, trying to throw body boards over to the swimmer.

‘It was lovely when they managed to rescue him because the whole beach was stood up and was clapping, and it was amazing.’

Another witness, who did not want to be named, told MailOnline: ‘It was very scary to watch, I phoned emergency services along with many others.

‘He was so lucky to make it back and survive as I think he was stuck out there for a good 20 mins. People were amazing and formed a chain to help pull him and the other guy out that was helping him.

‘He eventually got saved and everyone applauded. He looked exhausted and he laid down with some first aiders helping him until the paramedics arrived.

‘I’m pretty sure the guy was Nepalese from what I heard and he was with his family. It took about 30 mins for the paramedics to arrive and after a routine check they all left together (the guy seemed okay and was walking).’

Coastguard have issued a safety warning following yesterday afternoon’s incident urging people not to swim in the sea at the spot where there have been several deaths in recent years.

Two months ago, a man in his 20s drowned after going missing near the 200ft arch.

In 2018, five-year-old Rose Carter was also killed there after being swept 30ft out to see by powerful gusts of wind.

A Lulworth Coastguard spokesman said: ‘We were pleased to hear that the rescuer and the casualty were both recovered and were able to walk away.

‘With the large waves and spring tides of late, we strongly discourage sea swimming and playing around in the surf, especially on exposed beaches such as Durdle Door.

‘The undertow is very powerful and will have no trouble taking you off your feet.’