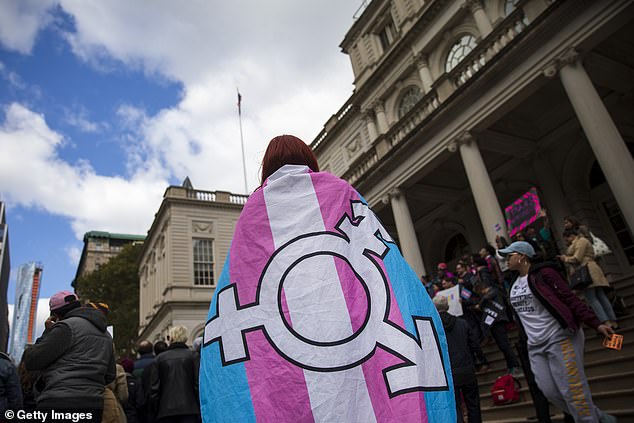 Transgender adults are up to six times more likely to be diagnosed as autistic than those whose gender identity corresponds with their birth sex, researchers claim.

University of Cambridge analysed data from 600,000 adults drawn from five different datasets, including over 500,000 individuals questioned as part of the Channel 4 documentary ‘Are you autistic?’ which aired in 2018.

They found that rates of autism among transgender adults far surpassed the numbers for the British population as a whole.

Transgender and gender-diverse individuals were also more likely to indicate that they had received diagnoses of mental health conditions, particularly depression.

A better understanding of gender diversity in autistic individuals will help provide better access to health care and post-diagnostic support, the experts say.

Pictured, a person in the US holding the transgender flag. The new study at the University of Cambridge investigates the co-occurrence between gender identity and autism

‘This finding, using large datasets, confirms that the co-occurrence between being autistic and being transgender and gender-diverse is robust,’ said study lead author Dr Varun Warrier at the University of Cambridge.

‘We now need to understand the significance of this co-occurrence, and identify and address the factors that contribute to well-being of this group of people.’

Gender-diverse is the umbrella term used to describe those whose gender identity or gender role does not correspond to the sex assigned to them at birth.

For example, ‘agender’ describes someone who does not identify as having a gender identity, while ‘two spirit’ refers to someone who identifies as having both a masculine and a feminine spirit. 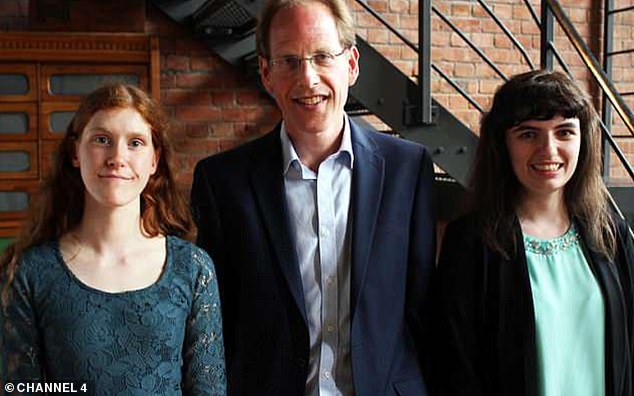 A shot of the Channel 4 documentary ‘Are you autistic?’. Georgia Harper (right), a trainee human rights lawyer and Sam Ahern (left), an artist, who present the programme are both autistic. They stand with University of Cambridge professor, Simon Baron-Cohen

SYMPTOMS AND SIGNS OF AUTISM

According to the Centers for Disease Control and Prevention, people with autism have trouble with social, emotional and communication skills that usually develop before the age of three and last throughout a person’s life.

Specific signs of autism include:

Participants had provided information about their gender identity and if they received a diagnosis of autism or other psychiatric conditions such as depression or schizophrenia.

Participants also completed a measure of autistic traits, which include difficulty with social interaction and resistance to changing routines.

Across all five datasets, transgender and gender-diverse adult individuals were between three and six times more likely to indicate that they were diagnosed as autistic.

This was compared to people whose gender identity corresponds to their sex at birth, commonly known as ‘cisgender’.

While the study used data from adults who indicated that they had received an autism diagnosis, it is likely that many individuals on the autistic spectrum may be undiagnosed.

‘Understanding how autism manifests in transgender and gender-diverse people will enrich our knowledge about autism in relation to gender and sex,’ said Dr Meng-Chuan Lai, a collaborator on the study at the University of Toronto.

Transgender and gender diverse people were also more than twice as likely as to have experienced depression.

On average, they also scored higher on measures of autistic traits, regardless of whether they had an autism diagnosis.

The study did not investigate whether gender identity and autism or the other way round, however.

‘Both autistic individuals and transgender and gender-diverse individuals are marginalized and experience multiple vulnerabilities,’ said Professor Simon Baron-Cohen, director of the Autism Research Centre at Cambridge.

‘It is important that we safe-guard the rights of these individuals to be themselves, receive the requisite support, and enjoy equality and celebration of their differences, free of societal stigma or discrimination.’

The study has been published in Nature Communications.

DO YOUR GENES DETERMINE IF YOU ARE TRANSGENDER?

Scientist recently uncovered 20 genes linked to being transgender – supporting claims that the condition has a physical basis.

Researchers from Vanderbilt University Medical Center, George Washington University and Boston Children’s Hospital believe the gene variations may contribute to people identifying with the opposite sex.

Critics of transgender identity say the condition is ‘all in the mind’, and transgender people have a psychological problem rather than a medical one.

But by highlighting genetic mutations that affect brain development, the latest findings point towards transgender identity having a physical basis.

Presenting their research at the Society for Reproductive Investigation conference, the researchers said: ‘We identified genetic variants in 20 genes that may play a role in transgender identity.

‘The most promising of these include variants of genes involved in neurologic development and sex hormones.’

Dr Ricki Lewis, a geneticist, said: ‘These are highly reputable folks going about this exactly the right way, searching the genomes of transgender people to highlight which genes they have variants in. It lends legitimacy, if that needs to be added, that transgender is not a choice but a way of being.’ 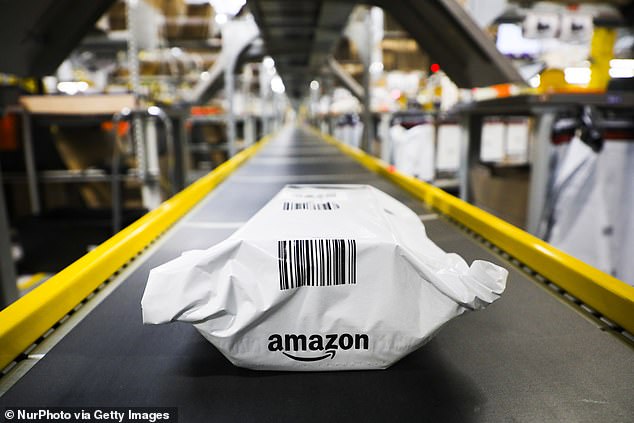 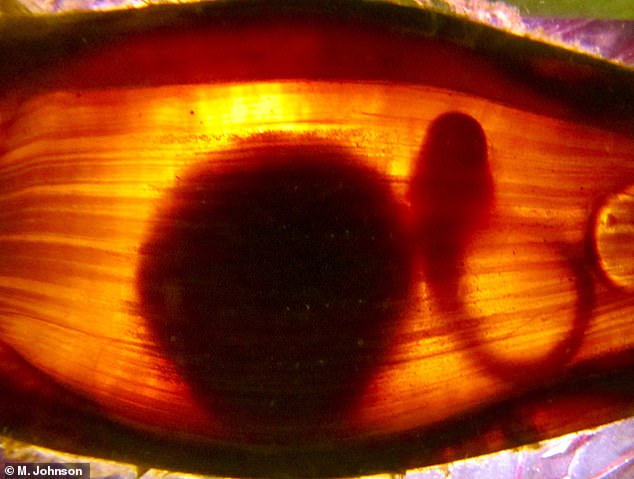