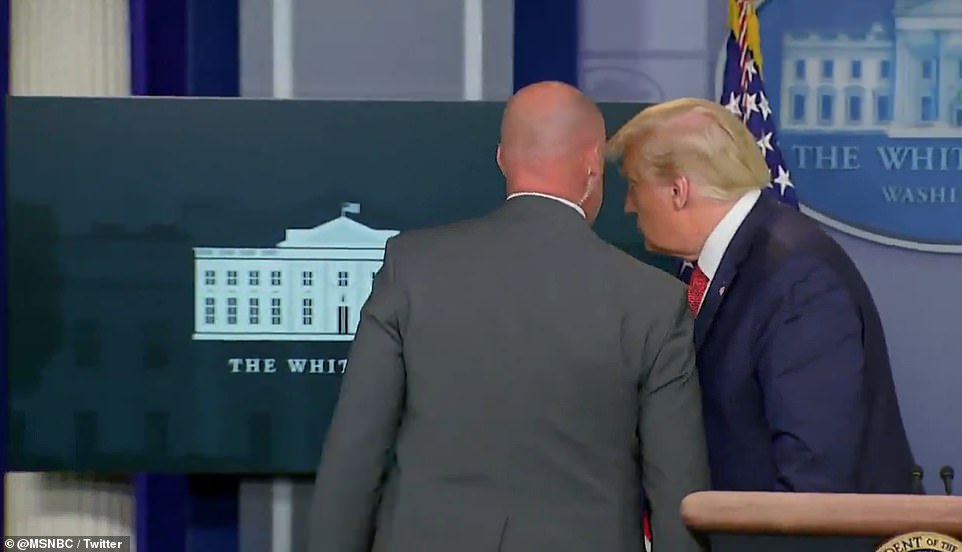 President Donald Trump was abruptly escorted from his press conference on Monday less than five minutes after it began after a Secret Service agent shot a 51-year-old man who ‘aggressively’ approached the officer and said he had a weapon outside the White House.

In a update released Monday night, the Secret Service said the man approached an agent around 5.53pm at the corner of 17th Street and Pennsylvania Avenue NW near the White House complex.

‘The suspect approached the officer and told the officer he had a weapon,’ the statement reads. ‘The suspect then turned around, ran aggressively towards the officer, and in a drawing motion, withdrew an object from his clothing.’

The agency said the man then ‘crouched into a shooter’s stance as if about to fire a weapon’.

‘The Secret Service officer discharged his weapon, striking the individual in the torso,’ the update reads.

Authorities did not release any other information about the man’s condition, only saying that both he and the agent were transported to local hospitals.

‘The White House Complex was not breached during the incident and no Secret Service protectees were ever in danger,’ the agency added. 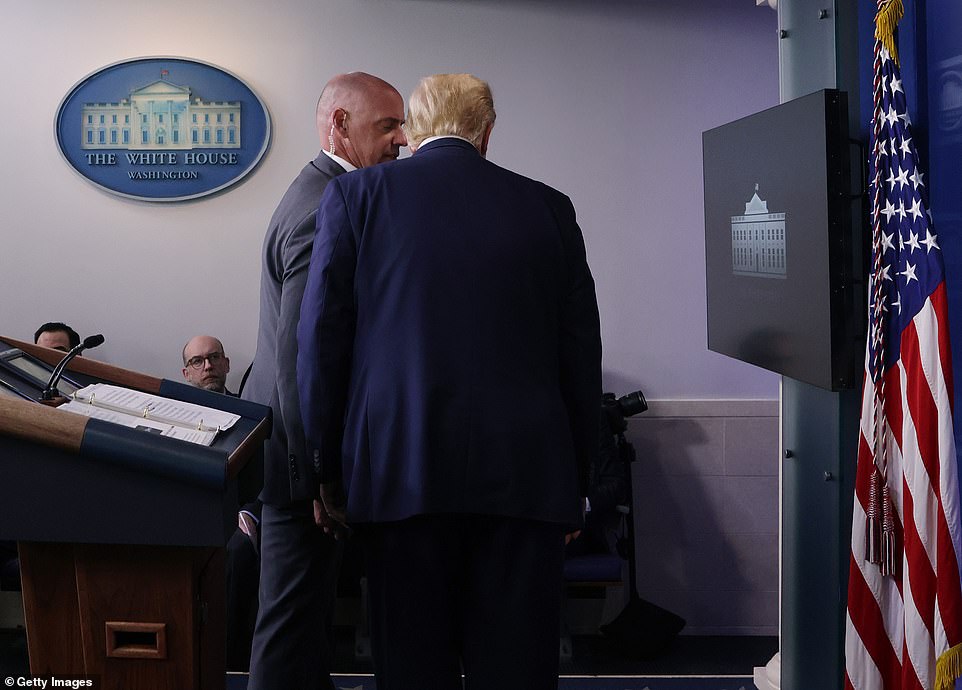 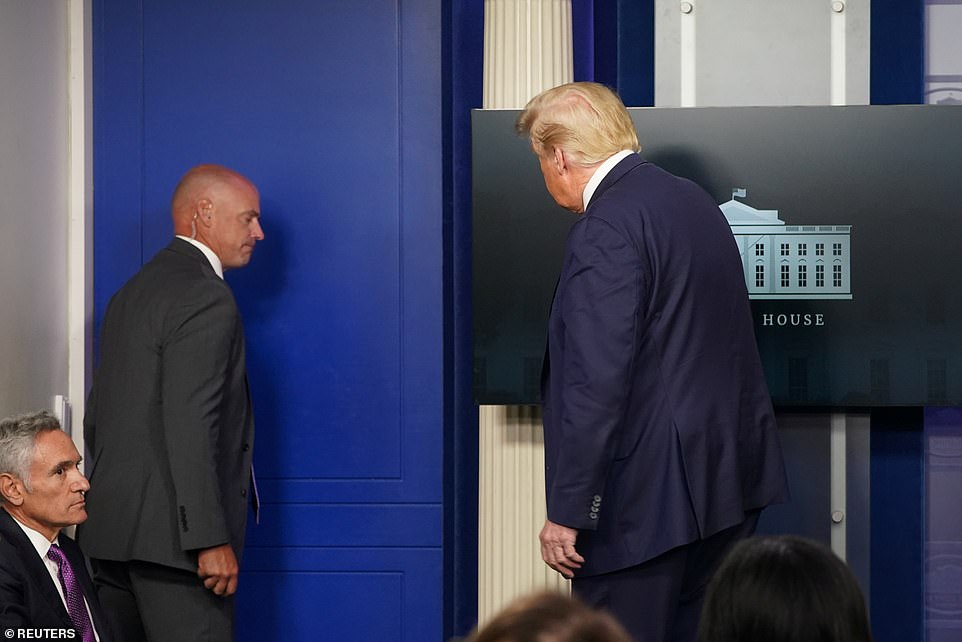 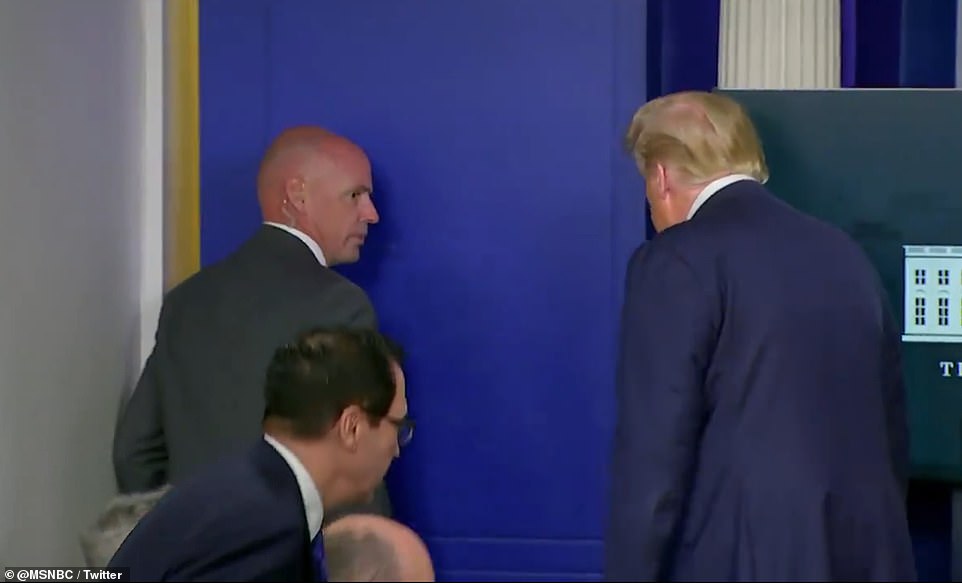 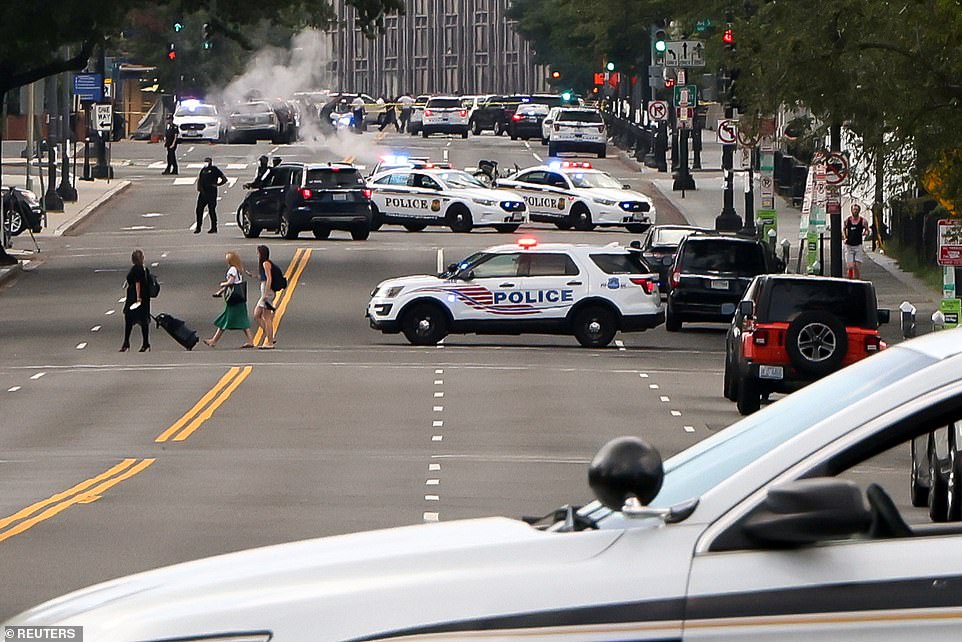 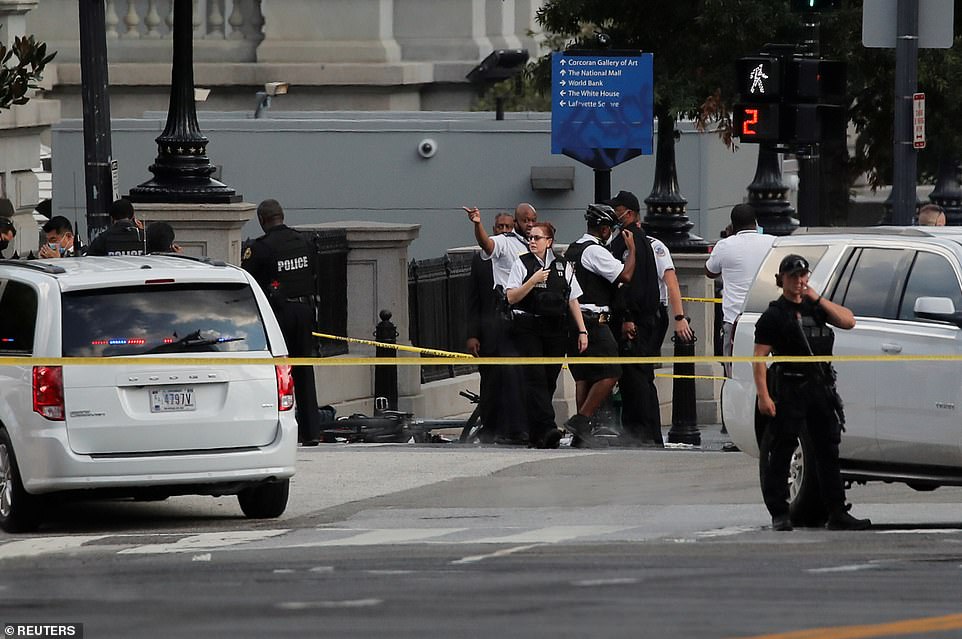 Police officers stand guard at the corner of 17th Street and Pennsylvania Avenue, after a shooting incident outside the White House 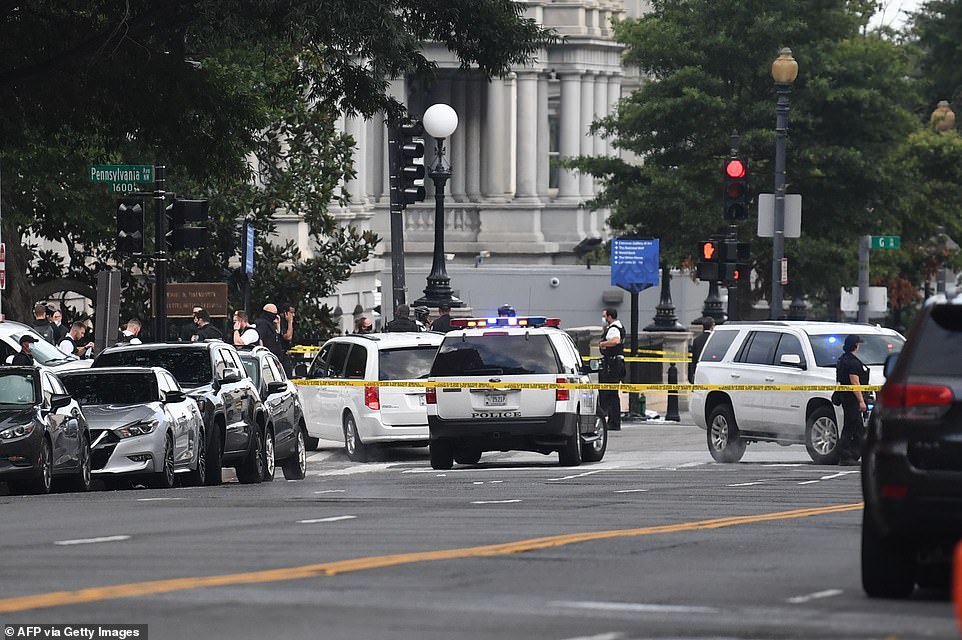 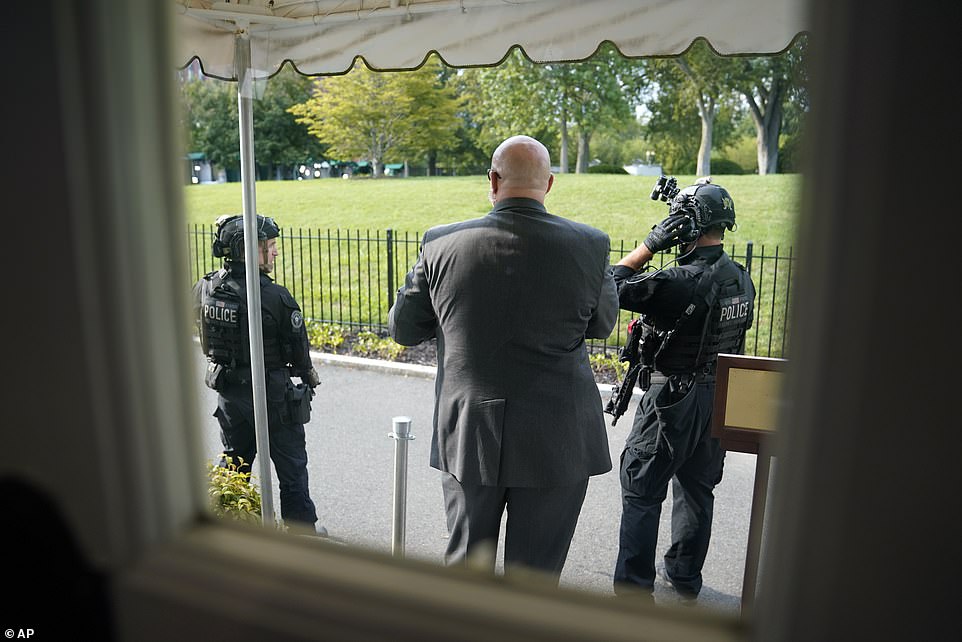 Law enforcement locked down the White House at the incident; a Secret Service agent stands outside the press briefing room 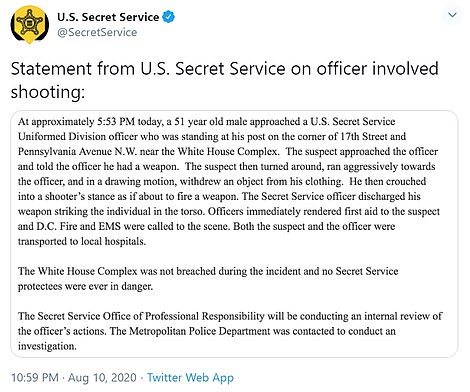 ‘The White House Complex was not breached during the incident and no Secret Service protectees were ever in danger,’ the agency said

An investigation into the actions of the agent is under way, the agency confirmed.

‘Excuse me,’ Trump said, looking up from the text of his speech at the interruption.

‘There’s been a shooting outside,’ the agent told him, whispering in his ear. ‘Sir you’re going to have to step out.’ His words were caught on the microphone at the podium.

‘Oh,’ Trump said and left the room with him.

A lockdown for the White House was declared, which is standard procedure during a security breach.

A few minutes after his exit, the president returned to the podium and said: ‘There was a shooting outside of the White House and it seems to be very well under control.’

He then proceeded to take questions from reporters on a variety of topics for nearly an hour and eventually said he was fine after being pulled from the room.

‘Do I seem rattled?,’ he asked at one point before thanking his security detail for their quick action.

‘I’d like to thank the Secret Service for doing their always quick and very effective work,’ he noted.

The area where the shooting occurred is at the Eisenhower Executive Office building, which sits next door to the White House. 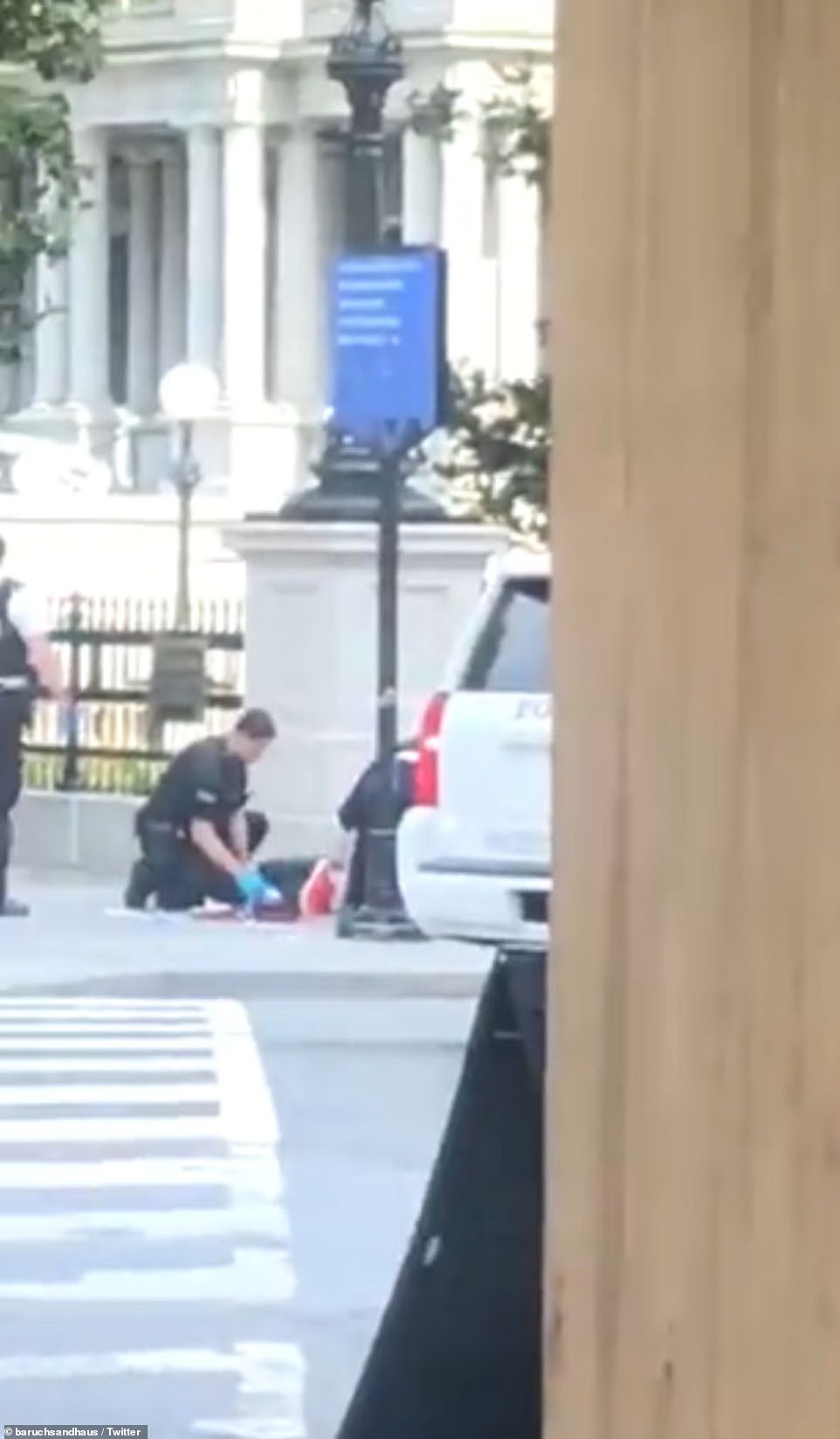 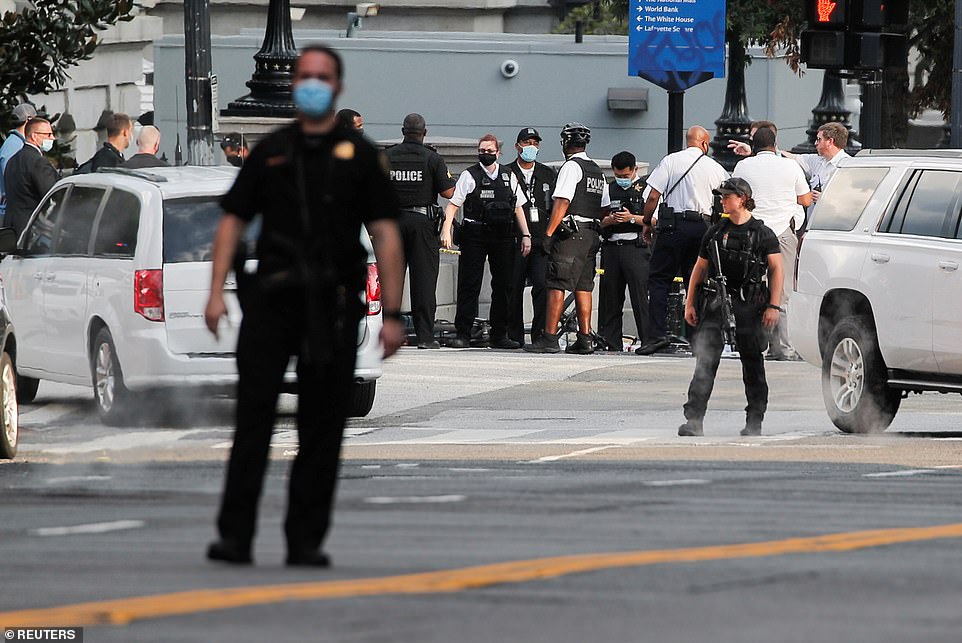 Police officers stand guard at the corner of 17th Street and Pennsylvania Avenue, near the White House 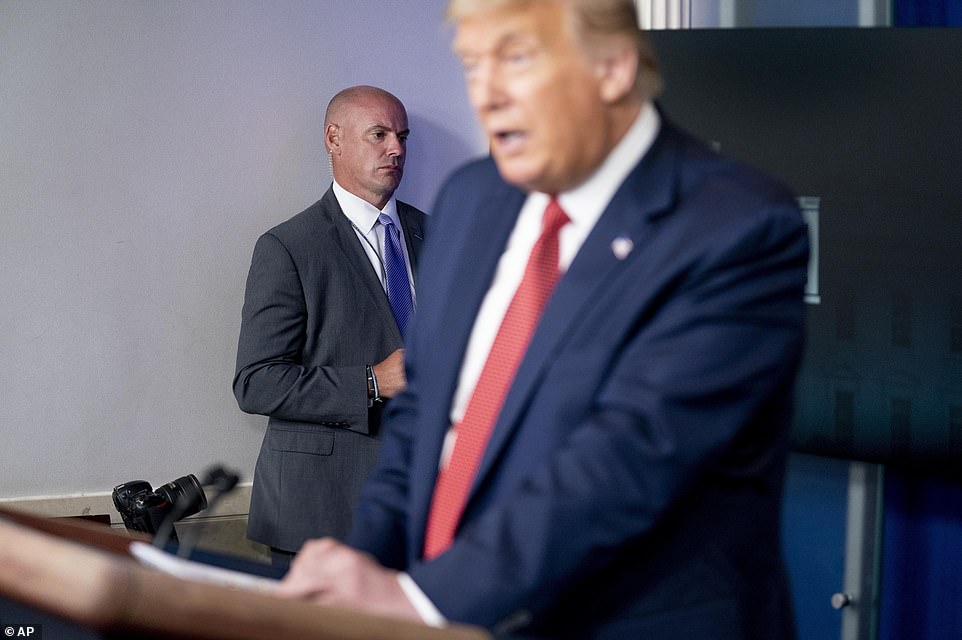 Trump said it was his understanding the suspect was armed but didn’t think it was necessarily about him.

‘It might not have had anything to do with me,’ he said. Trump said the agents took him to the Oval Office, which is just down the hall from the press briefing room.

Video on social media showed an individual on the ground with law enforcement surrounding the person at the corner of Pennsylvania Avenue and 17th Street.

The president said he was surprised by what happened but was not concerned for his personal safety.

‘I was surprised,’ he said. ‘It’s pretty unusual but very, very professional people. They do a fantastic job, as you know.’

‘The world has been a dangerous place. Very dangerous place and it will continue, I guess, for a period of time. I feel very safe with Secret Service, they are fantastic people. They are the best of the best and they are highly trained,’ he added.

Secret Service agents screen all reporters and visitors before they enter the White House complex.

Additionally, agents lock down the briefing room before the president enters with agents standing at all its entry points. 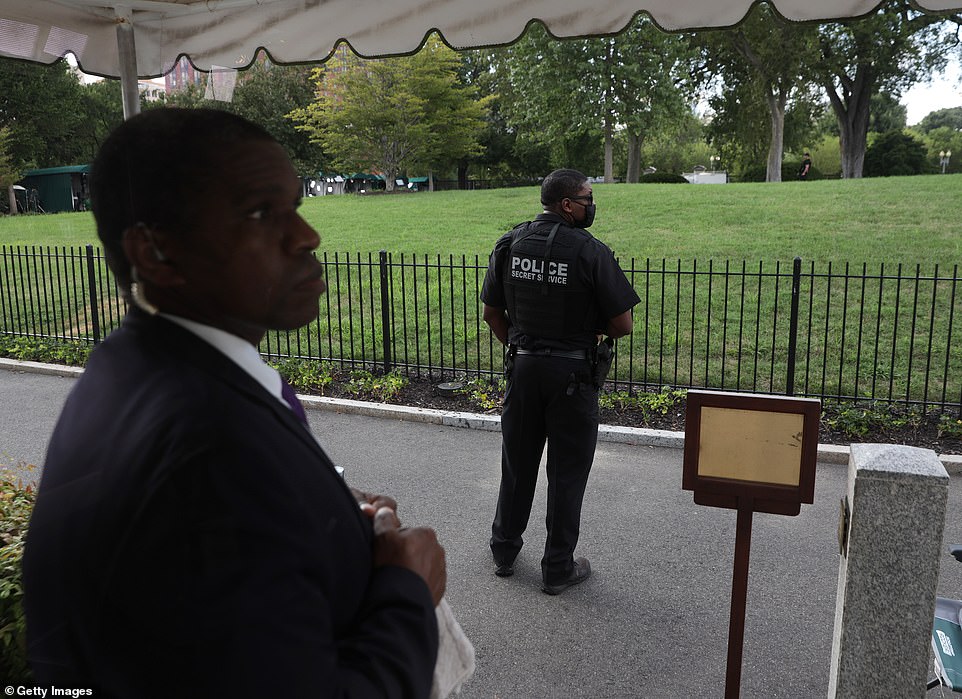 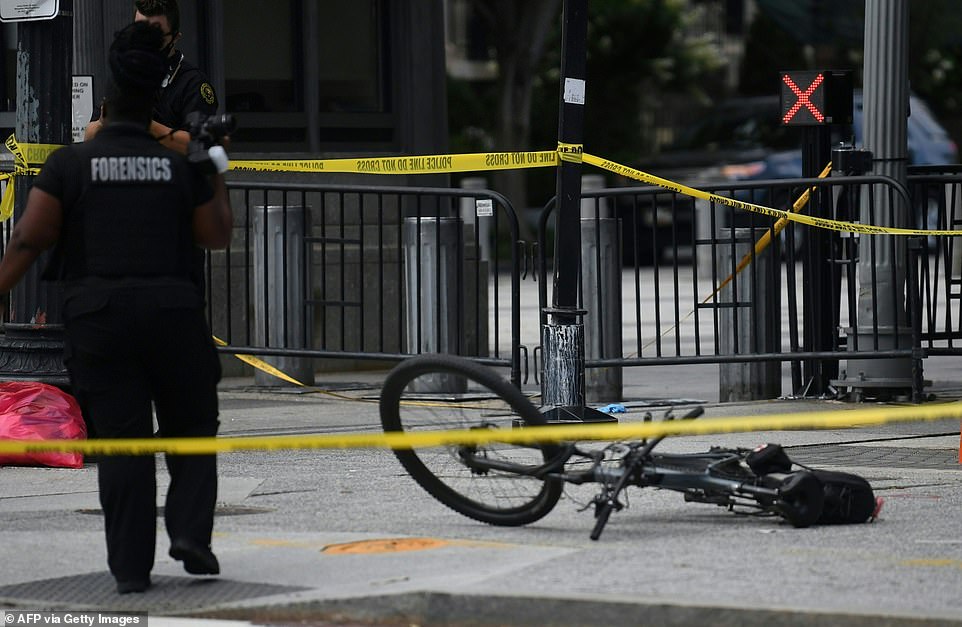 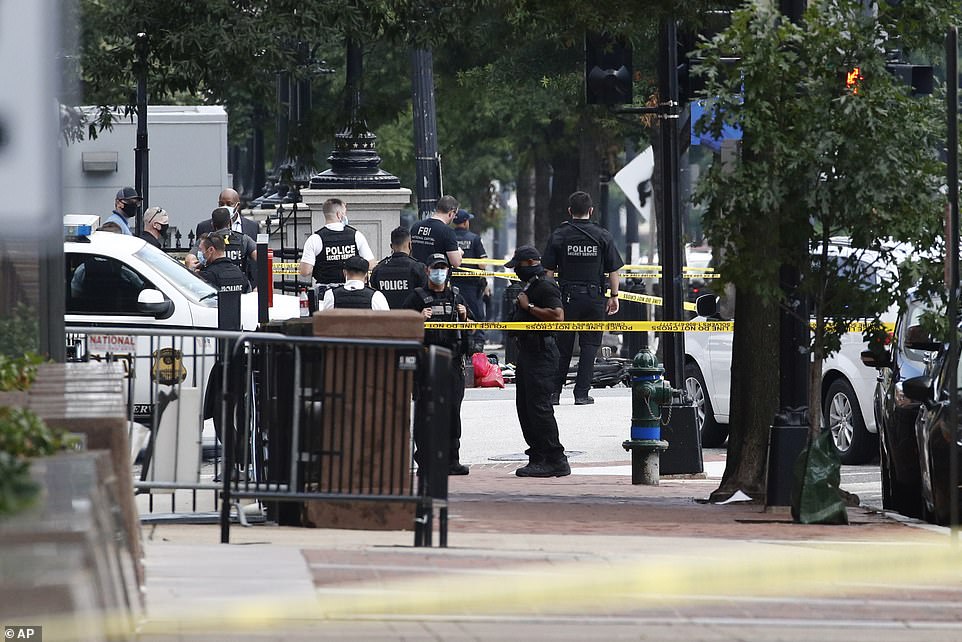 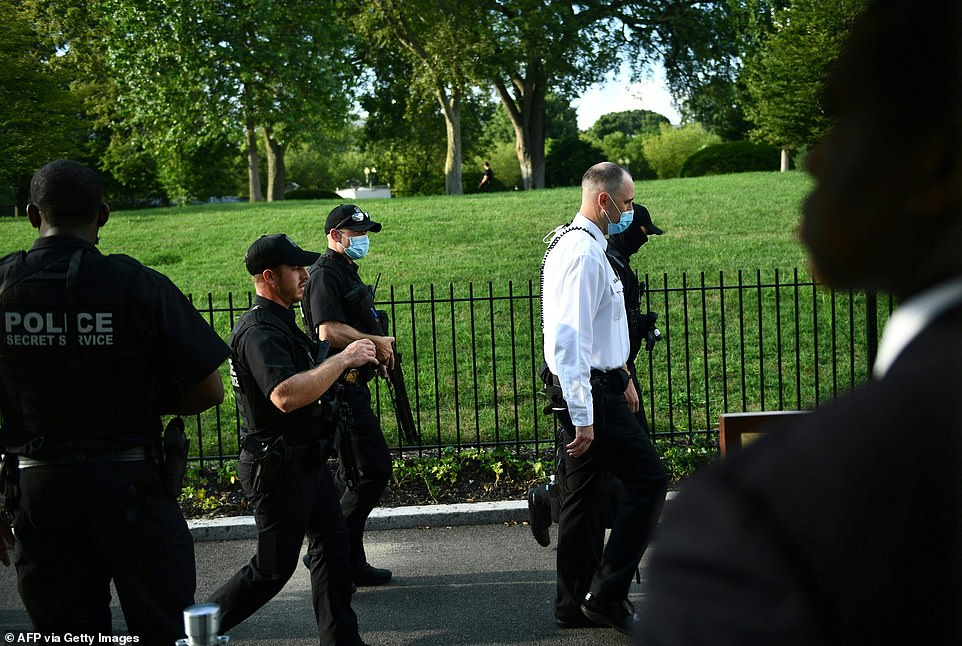 He said he never considered canceling his press briefing.

‘I didn’t even consider not coming back,’ Trump said. ‘I asked if I was able to come back, they said to wait a little while.’

And, with that, he somewhat impatiently returned to what he was saying before he was pulled from the room, talking about the rise in the stock market.

Then, in a freewheeling exchange with White House reporters, he spent nearly an hour discussing the coronavirus, negotiations with Democrats on a relief package, and his Democratic rival Joe Biden.

He also brought up one of his favorite topics, his accusation that former President Barack Obama spied on his campaign. During the 2016 presidential campaign, when Obama was president, the FBI opened a counter-intelligence investigation into the Trump campaign to see if Russian agents were trying to influence the election.

Trump turned that into a deep state conspiracy working against him.

As he took questions, President Trump saw John Roberts of Fox News standing at the back of the room. He noted Roberts was outside when the incident occurred. Roberts was doing a live shot from the North Lawn of the White House at the time.

‘I heard two shots in rapid succession just after you took the podium,’ Roberts told him.

‘I saw your report inside when I went inside. It was a good report, thank you very much, appreciate it,’ Trump told him. 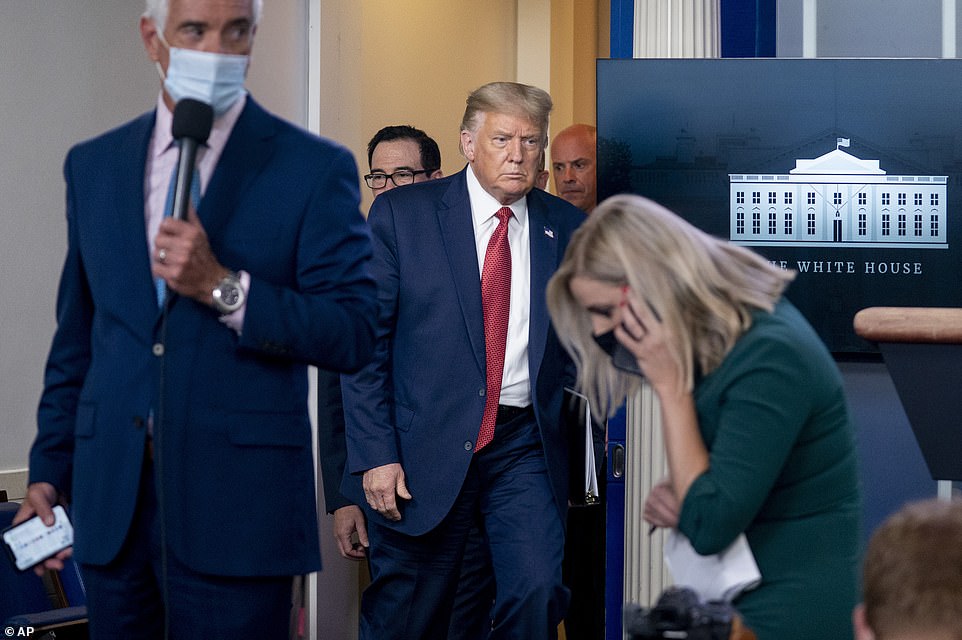 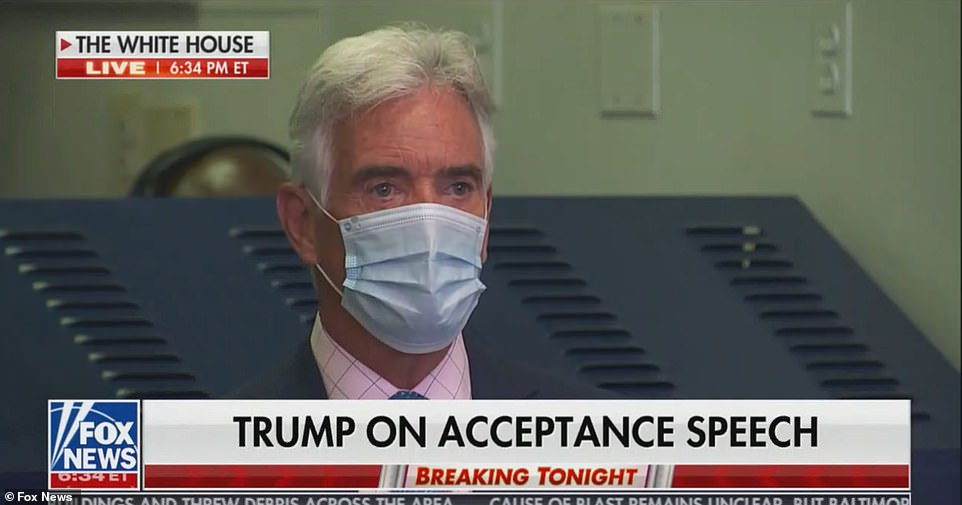 During the briefing, President Trump saw John Roberts of Fox News standing at the back of the room and asked him to talk about the shots he heard fired 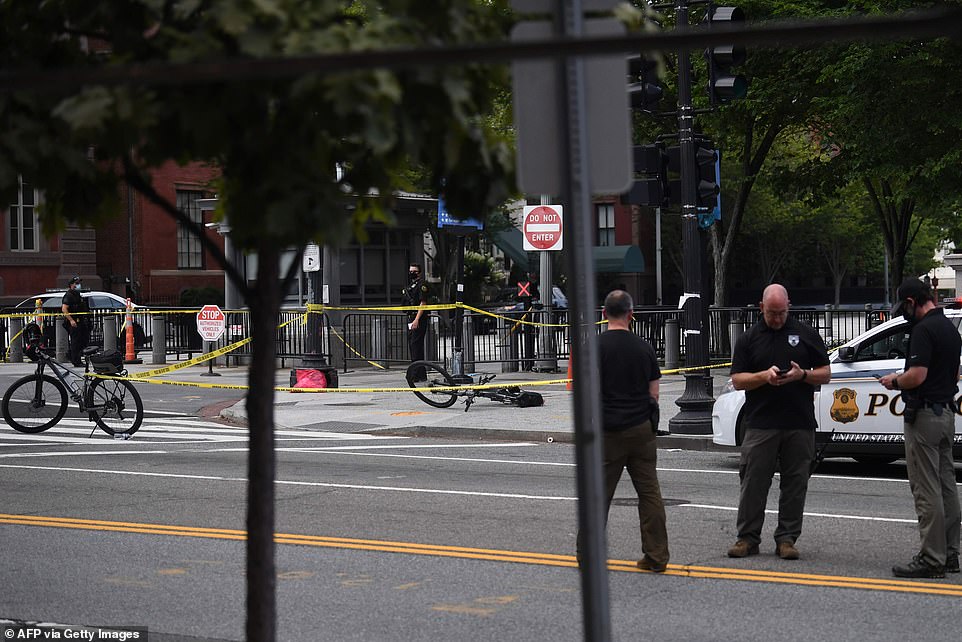 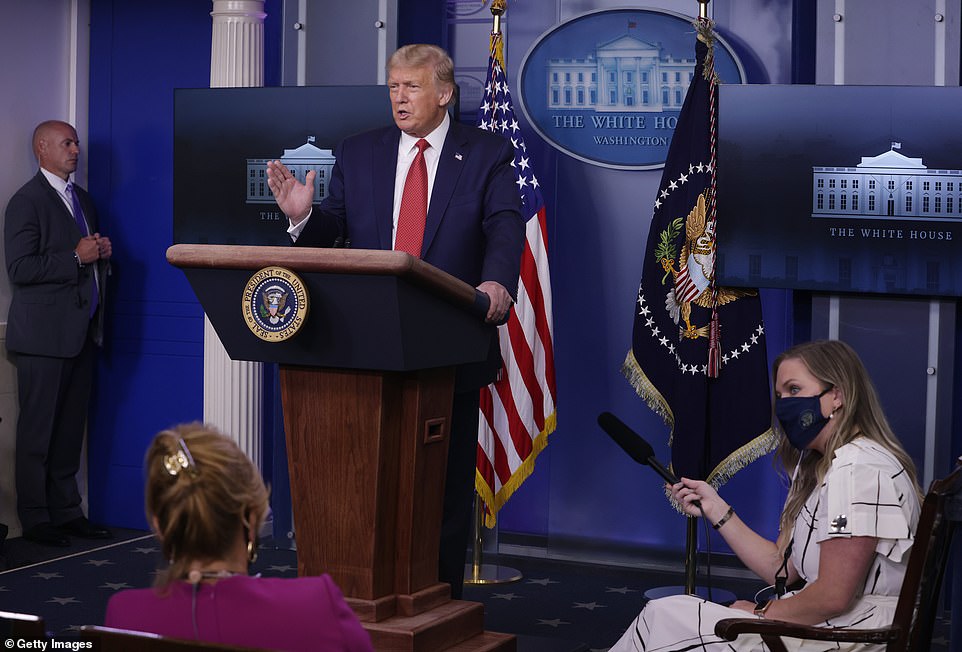 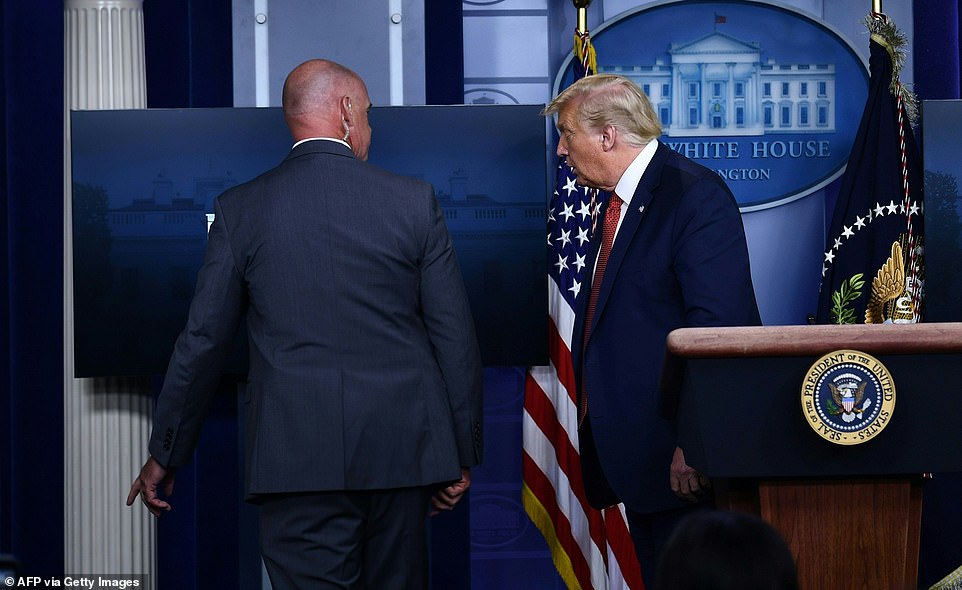 Upon his return after an agent escorted him out, President Trump said he never considered not returning to finish his press briefing 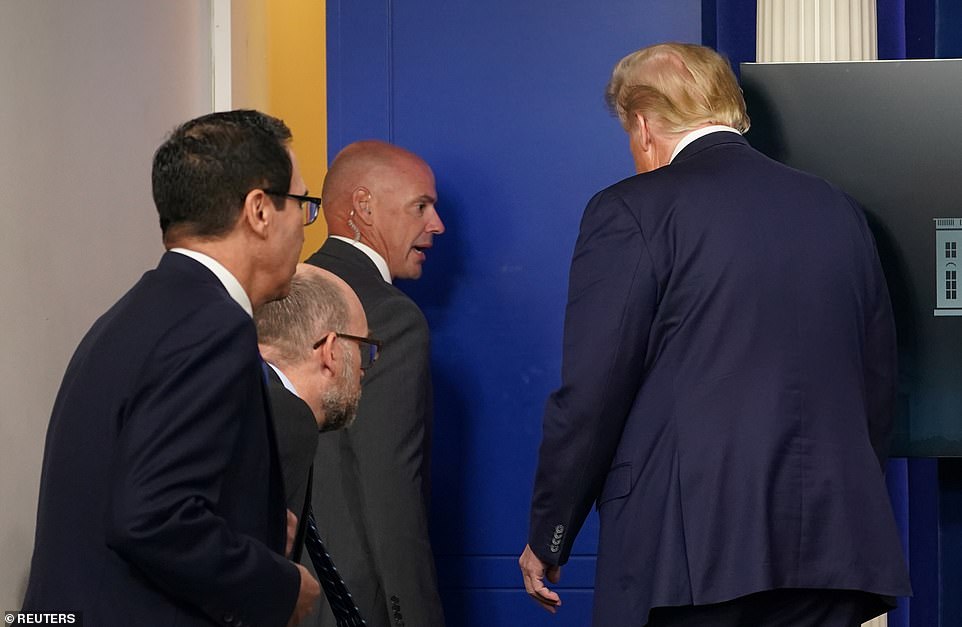 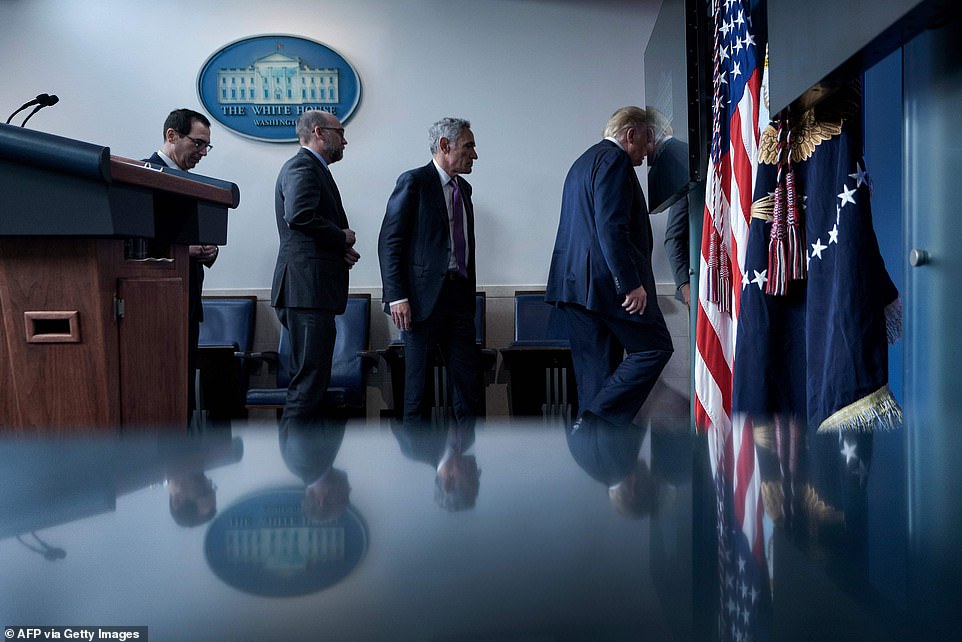 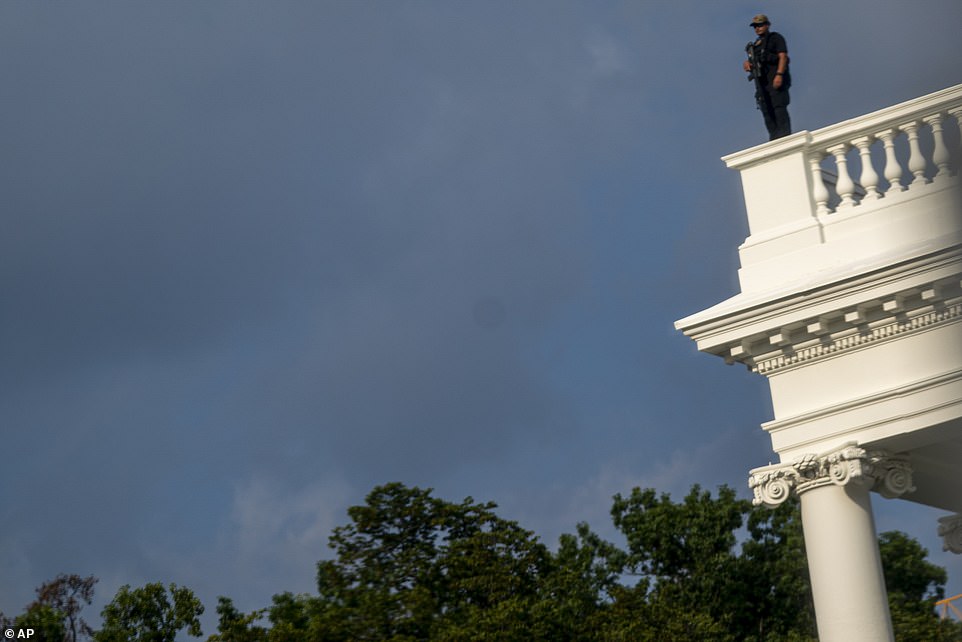 A U.S. Secret Service police officer stands on the roof of the White House 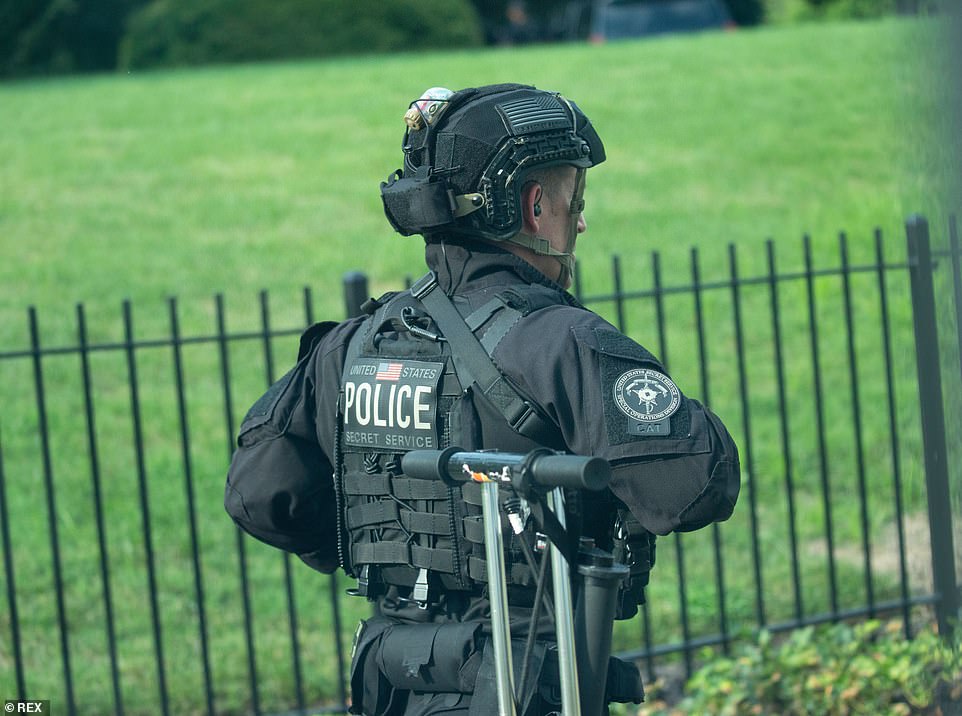 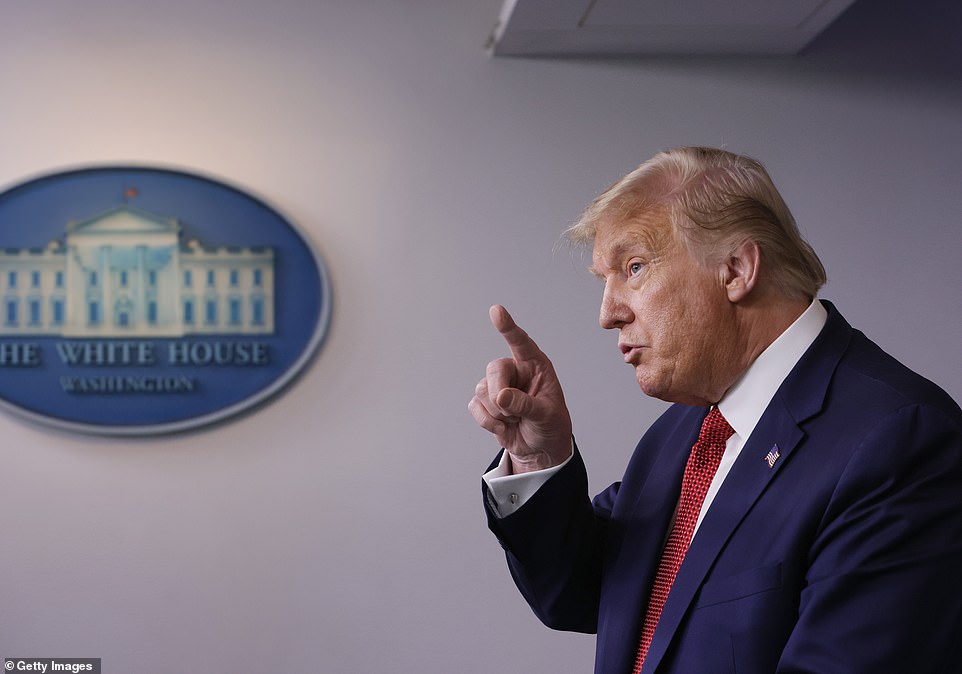 President Trump picked up his briefing where he left off, talking about the stock market 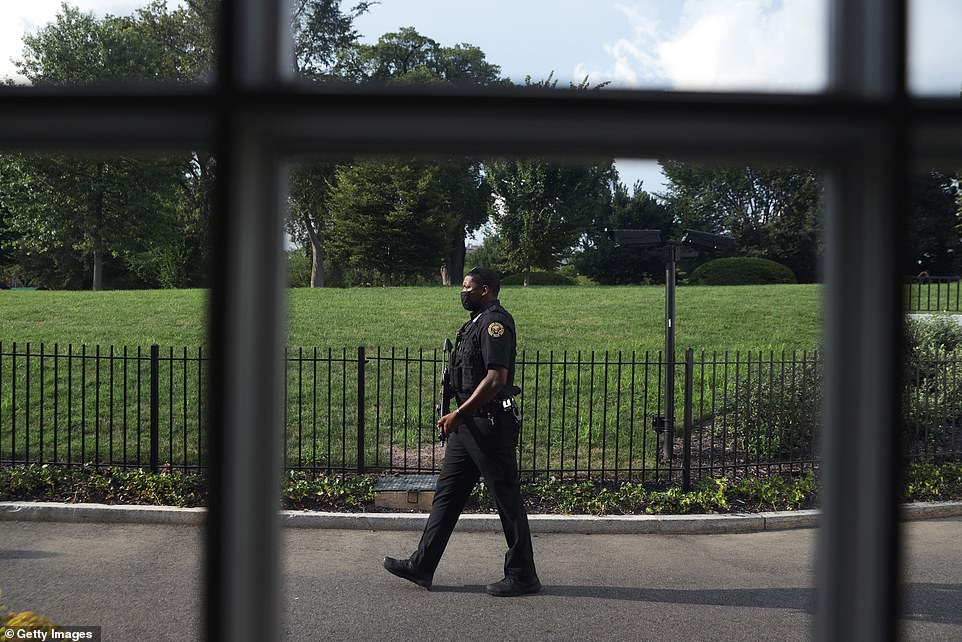