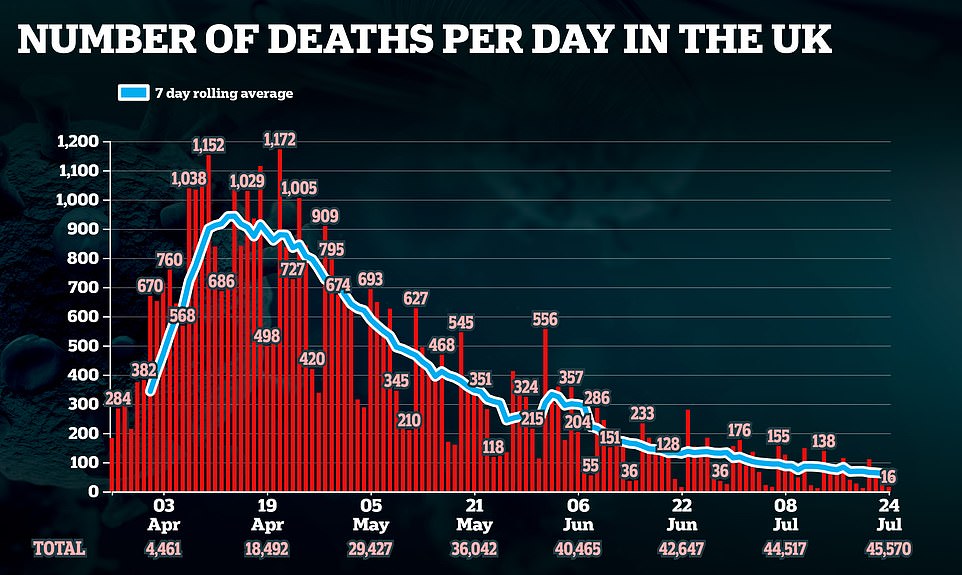 Another 16 people were today confirmed to have died of Covid-19 in the UK, as SAGE admitted the reproduction rate of the virus has risen closer to the dreaded number of one in all regions of England.

NHS England revealed that all of today’s victims had died in its hospitals, with Scotland, Wales and Northern Ireland all recording zero fatalities for the second day running. It takes the UK’s total number of victims to 45,570.

The preliminary daily death toll is calculated by adding up the deaths announced by all of the home nations – but it does not account for fatalities in care homes or in the community in England. The official tally announced later today by the Department of Health will likely be higher because it includes Covid-19 deaths in all settings.

Today also marked the ninth day in a row that no deaths have been recorded in Scotland, with experts now predicting the country will be the first in the UK to be virus-free by the end of summer.

But the R rate – the average number of people each coronavirus patients infects – has risen to between 0.7 and one or 0.8 and one in all regions of England for the first time since lockdown was lifted. The R needs to stay below one to prevent future outbreaks from spiralling out of control.

It doesn’t necessarily mean England is on the brink of another crisis, however, because scientists say when case numbers are as low as they are, the R becomes more volatile and small clusters can skew the rate upwards.

In the Midlands, the North West, and South West, the R is hovering between 0.7 and one, while in London, the East, North East and Yorkshire and South East it is slightly higher, sitting at between 0.8 and one.

Scientists today said they were ‘reassured’ to see the R number still squashed below one, but warned it ‘is very important to stay vigilant because of the the fact that it is so close’ to the point at which it could spiral.

Separate SAGE data today revealed the UK’s current growth rate — how the number of new cases is changing day-by-day — is between minus four and minus one per cent. The finding provides more confirmation the crisis is still petering out and suggests the reopening of pubs, restaurants, hairdressers and beauty salons on July 4, dubbed ‘Super Saturday’, has not triggered a resurgence.

But the figures show the UK’s outbreak is now shrinking at a slightly slower speed because the growth rate has crept up from last week’s rate of minus 5 per cent to minus 1 per cent per day, in a sign that the crisis has stagnated.

Data published by the Office for National Statistics today painted a similar picture, suggesting an extra 1,000 people are catching the disease every day compared to a week ago. Statisticians behind the report say the increase is too marginal to suggest the virus is enjoying a resurgence, but they claim it is proof that cases have levelled off. 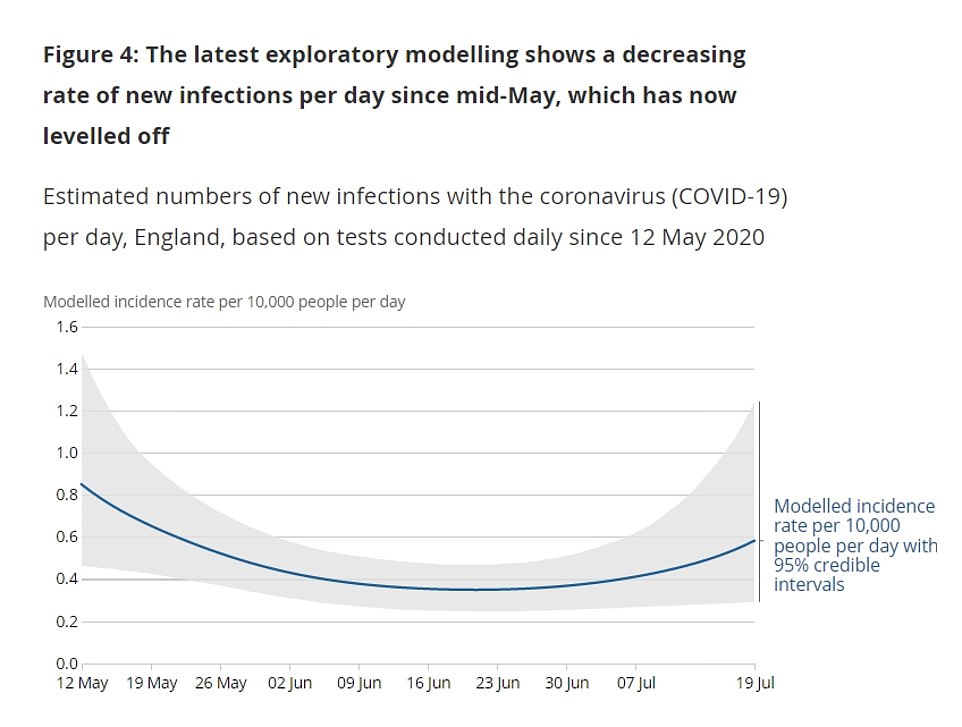 Office for National Statistics data based on population testing estimate that daily infections have risen from 1,700 to 2,800 in the space of seven days. It suggests one in 2,000 people across the country were carrying Covid-19 within the most recent week up to July 19 – a total of 27,700 people or 0.05 per cent of the population 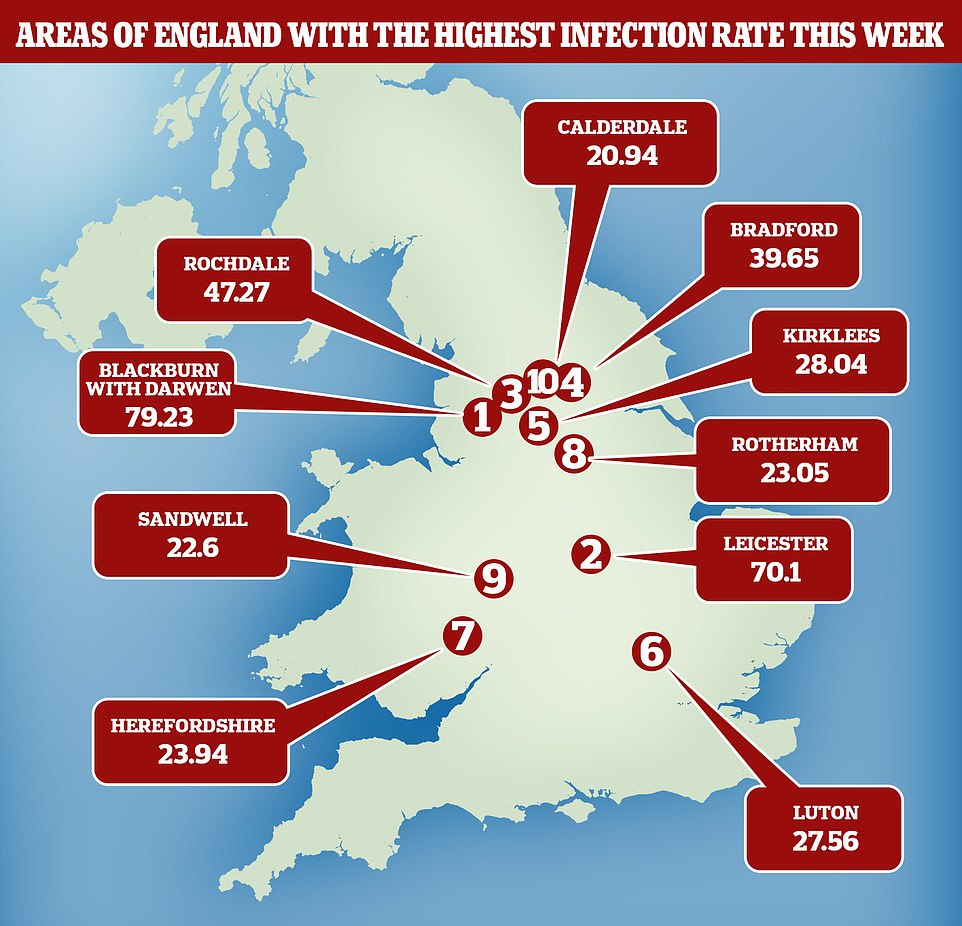 Blackburn has become the new epicentre of Covid-19 in England. There are now 79 cases per 100,000 people in Blackburn, more than Leicester, at 70. Rochdale, Bradford and Kirklees are all at the top of the leaderboard for the highest infection rates across England, and cases do not appear to be slowing

Reacting to SAGE’s R and growth rate estimates, Dr Yuliya Kyrychko, Reader in Mathematics, University of Sussex, said: ‘It is very reassuring to see the R number estimates to be below or equal to one in all regions.

‘At the same time, the fact that it is so close to one, and that the growth rates in the East of England and the South West are estimated to be up to +2 per cent suggests that it is very important to stay vigilant and continue with monitoring and efficient tracking of suspected cases to avoid a possibility of overlooking an outbreak.

‘Recent examples from the UK and overseas show that once the restrictions are lifted, it may take some time for infections to pick up again, hence, particular care should be taken with interpreting the data, and collecting and analysing it quickly and at a local level.’

Dr Konstantin Blyuss, Reader in Mathematics, University of Sussex, said: Since the overall numbers of new infections are rather small now, this adds uncertainty to estimates of R number, and this can provide a false sense of security both to a wider population, and to local councils making decisions about strategy for disease containment and prevention.

In this respect, it is essential that people try to adhere as much as practically possible to existing guidelines, namely, use of face masks, maintaining social distancing, and working from home wherever possible.’

It comes as separate data released today suggested the coronavirus outbreak in England may be growing because an additional 1,000 people are catching the disease every day compared to last week.

Office for National Statistics figures based on population testing estimate that daily infections have risen from 1,700 to 2,800 in the space of seven days.

The ONS has stopped short of saying the crisis is growing because all three estimates are based on complex trend models and fall within a possible range.

But statisticians behind the report say the week-on-week rises for sure indicate that the epidemic’s decline has ‘now levelled off’.

ONS data is considered to be some of the most accurate available – this week’s update was based on the results of 114,674 swab tests taken over six weeks, of which 45 were positive.

It does not include infections in care homes – but official Government data for diagnosed cases of Covid-19 across all settings shows figures have climbed 10 per cent since last week.

The data comes three weeks after the largest lockdown restrictions were lifted on ‘Super Saturday’ – July 4 – and ahead of a further relaxation tomorrow, when gyms and leisure centres are opened.