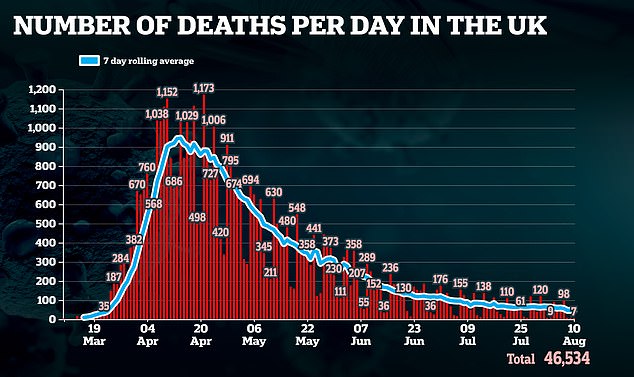 A further seven deaths from the coronavirus have been confirmed in Britain today, with six in English hospitals and one in Northern Ireland.

The preliminary count, which will be updated by the Department of Health later this afternoon, takes the total so far to 46,581.

The number of new confirmed cases will also be confirmed this afternoon. Scotland diagnosed a further 29 people yesterday, along with 12 new cases in Wales.

Today’s data comes amid concerns the virus is starting to spread out of control again after 1,062 people were diagnosed yesterday – the first time since June 25 that the daily rise was more than 1,000.

And ministers are reportedly considering doing away with the daily death updates after a Public Health England fiasco that saw them getting exaggerated each day because people dying of other causes were being included.