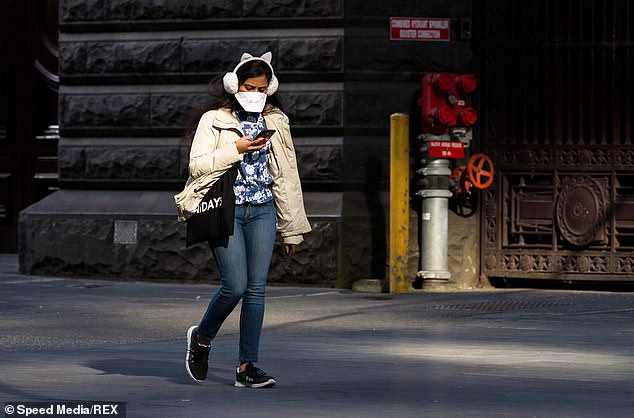 Victoria has reported 149 new coronavirus cases with another 24 people dead – the second deadliest day since the pandemic began.

The state recorded its highest number of COVID-19 fatalities on August 17, with 25 deaths. The latest fatalities take the state toll to 462 and the national figure to 549.

There are currently 578 Victorians in hospital, with 39 of those fighting for life in intensive care, including 16 patients on ventilators.

The new coronavirus infections on Wednesday mark the third day the daily cases have dropped below 150 – with 148 on Tuesday and 116 on Monday.

Despite the promising decline, Premier Daniel Andrews is attempting to extend Victoria’s coronavirus State of Emergency beyond its September expiry date. 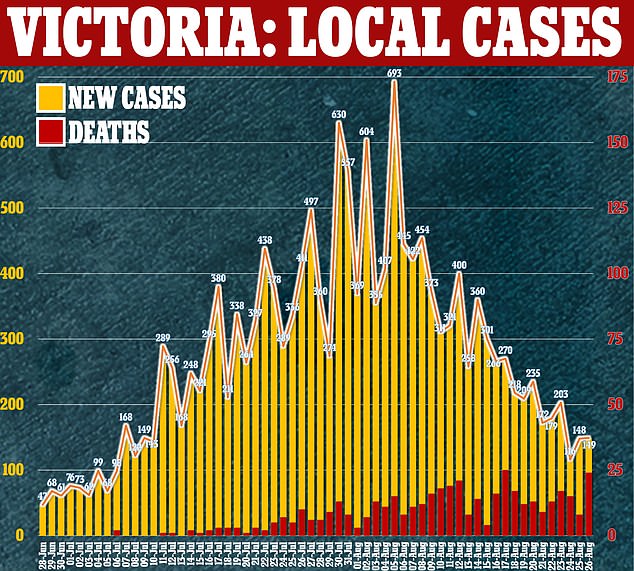 Pictured: A graph shows Victoria’s second wave of coronavirus infections, from the end of June through to August

The state government wants to rewrite the Public Health and Wellbeing Act to allow a State of Emergency to last for up to 18 months.

At present, a State of Emergency can only run for six months and is due to expire on September 13, along with Melbourne’s stage four lockdown and regional Victoria’s stage three rules.

Without the extension, Mr Andrews said the chief health officer would no longer able to issue public health directions to prevent the spread of coronavirus.

These include rules around quarantine, face masks, mass gatherings and density limits for venues.

For the bill to pass parliament, Mr Andrews must rely on crossbench support.

On Wednesday, the premier said he was having ‘very productive’ discussions with the crossbench.

‘We’re very confident that we will be able to get an outcome that both protects public health but just as importantly allows us to plan for the future with some certainty,’ Mr Andrews said.

‘I want to make the point to every single Victorian – we will need rules for many months to come. 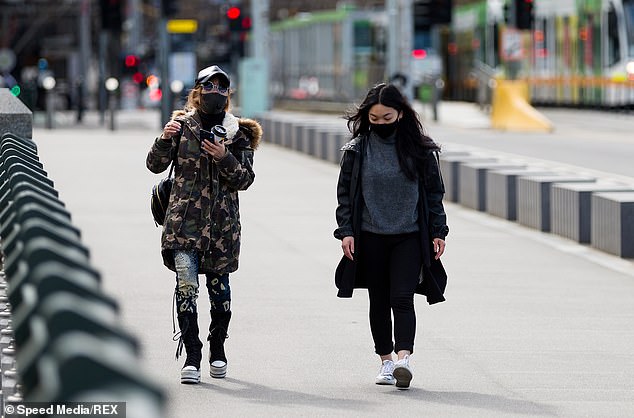 The state usually conducts about 20,000 tests each day.

Mr Andrews acknowledged the weather was not great over the weekend so residents might be less likely to go for a test.

‘It does make some sense that as you have less symptoms in the community, you have less people who are symptomatic coming forward and getting tested,’ he said.

‘Lockdown, I think, also makes it perhaps somewhat harder for people to go and get tested.’

The premier said the average time it takes to get a coronavirus test result after the swab is less than a day.

Mr Andrews again urged all Victorians to come forward for testing if they experience symptoms.

‘It’s a massive – a powerful thing that you can do to support everyone across the community in our strategy and our fight against this wildly infectious virus,’ he said. 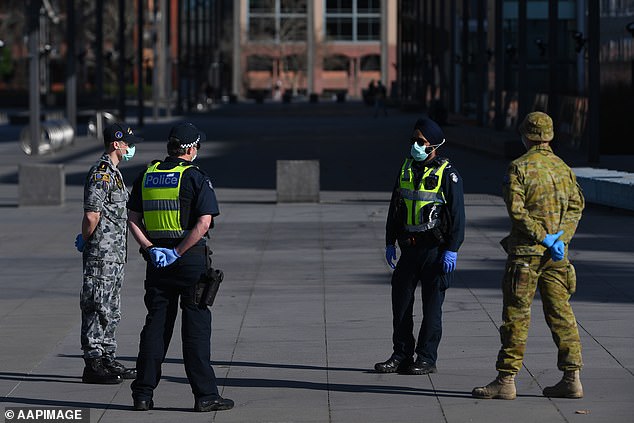 Victoria Police, Airforce and ADF personnel are seen outside of the Melbourne Museum in Melbourne during Stage 4 lockdown

Mr Andrews said the decline in COVID-19 infections from a peak of 725 was a ‘mighty effort’.

The premier said rules could be eased with ‘the lightest touch possible’ once coronavirus infections drop even further.

‘The task of rebuilding, the task of focusing exclusively on jobs and skills and strength. That’s exactly where we’re going to get to, but you can’t get there with no rules at all,’ he said.

Health Minister Jenny Mikakos pleaded the government’s case on Wednesday morning, stressing it would not mean a continuation of Melbourne’s Stage 4 restrictions and the Stage 3 measures for regional Victoria.

‘Essentially, (without the extension) we will go from stage four restrictions to falling off a cliff and having no rules, no restrictions in place, no measures in place to protect Victorians and save lives,’ she told ABC National.

‘It’s about having some measures in place to see us through until such time as we have a vaccine.’ 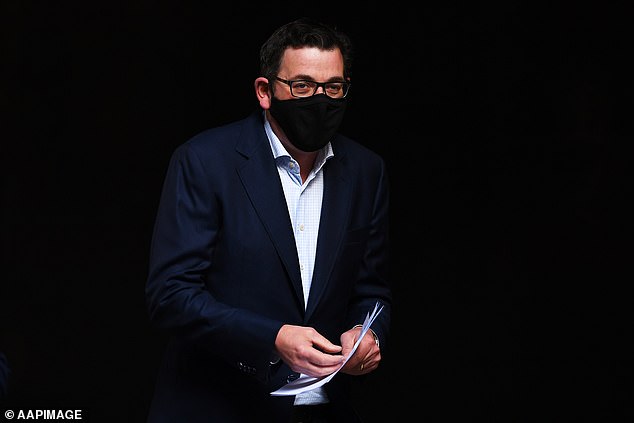 Melbourne has been in Stage 4 lockdown since 6pm on Sunday August 2, while the rest of the state is subject to Stage 3 restrictions

Ms Mikakos said Victoria was the only Australian state or territory with limitations on equivalent state of emergency legislation.

She said the extension would mean the government could continue with measures such as having people who test positive stay at home.

Otherwise, Ms Mikakos said there would be a ‘total vacuum’.

But the extension proposal has sparked a massive backlash from the community as well as politicians.

‘I understand people are anxious and we will work incredibly hard to make sure people understand that this is an insurance policy,’ Ms Mikakos said.

‘We have to have a legal framework in place to enable our chief health officer to issue legal directions to keep some measures in place and save lives.’ 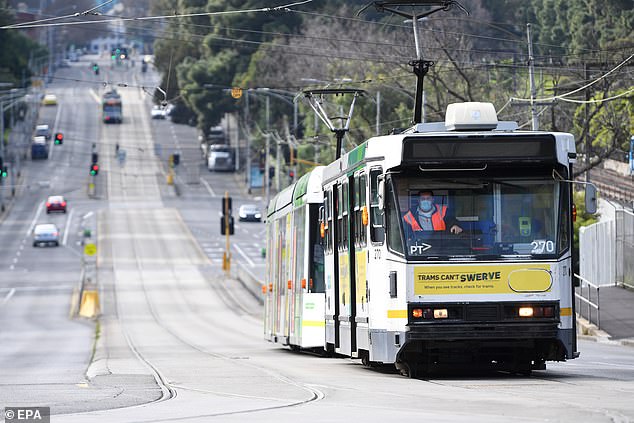 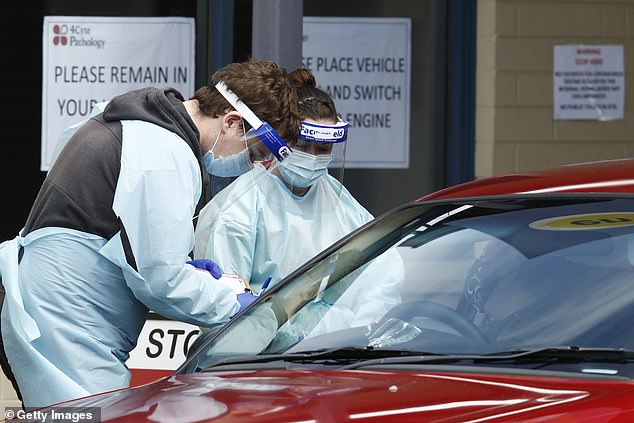 Pictured: Medical workers at a COVID-19 drive through clinic in Ballarat, Victoria, on August 21 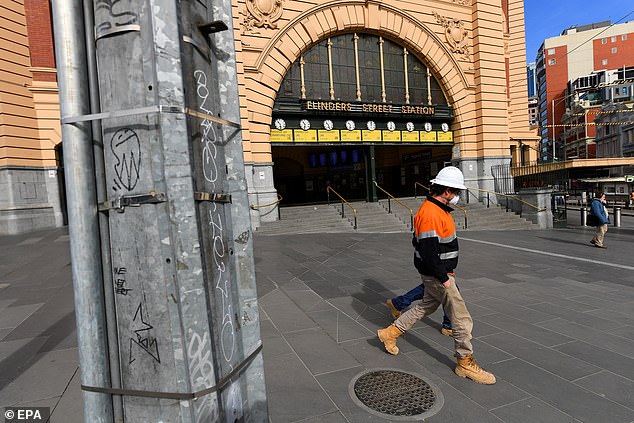 Pictured: A construction worker in a face mask walks out the front of Flinders Street Station on Tuesday

There are calls for the government to only extend the state of emergency for three or six months, reporting back to parliament if it needs longer.

But Ms Mikakos said there were already checks and balances in place, noting the government had to report back to parliament every four weeks during the current state of emergency.

On Wednesday, Mr Andrews said there were 434 active coronavirus cases in health workers.

At least two-thirds of coronavirus-infected healthcare workers in Victoria have caught the illness while on the job.

New detailed research unveiled on Tuesday shows at least 69 per cent of healthcare staff with COVID-19 in the second wave became infected in work settings. 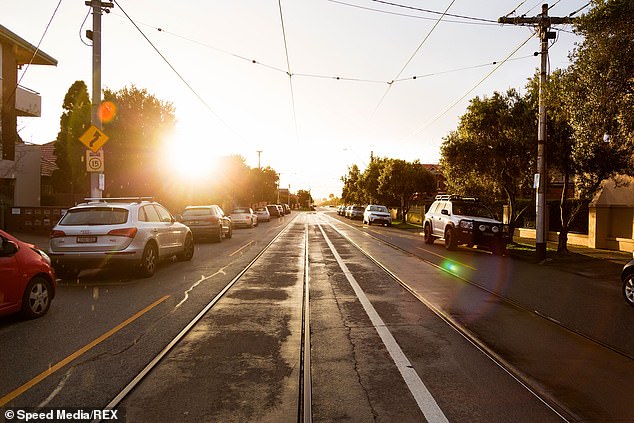 A deserted Park Street in Melbourne, which would usually be rammed during rush hour, is seen empty on Tuesday morning (pictured) 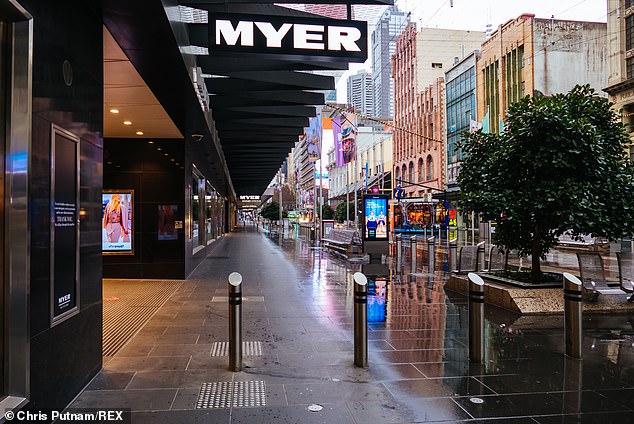 WHAT MELBOURNE’S STAGE FOUR LOCKDOWN MEANS FOR YOU

State of disaster: Increased police powers to enforce the lockdown. Cautions will no longer be issued, only $1,652 fines or court summons

Curfew: No one allowed outside 8pm to 5am except for work, medical, caregiving – no shopping or exercising

Distance limit: Shopping and exercise can only be done 5km from home

Exercise: All recreational activity is banned and you can only exercise, with one other person, for one hour a day

Partners: You can visit a boyfriend or girlfriend who doesn’t live with you, even if they live more than 5km away

Shopping: Only one person can go shopping per household per day

Cafes and restaurants stay open for takeaway, as do supermarkets, etc

Schools: All students learning from home unless they are vulnerable or parents are essential workers. Kindy and childcare closed

Funerals: No change to funeral limits, but only 10 mourners can leave Melbourne to regional Victoria for one

Public transport: Slashed after 8pm and cancelled late at night

Community sport: All community sport across Victoria is now banned. Only exercise is allowed within the permitted public gathering limits of two people.