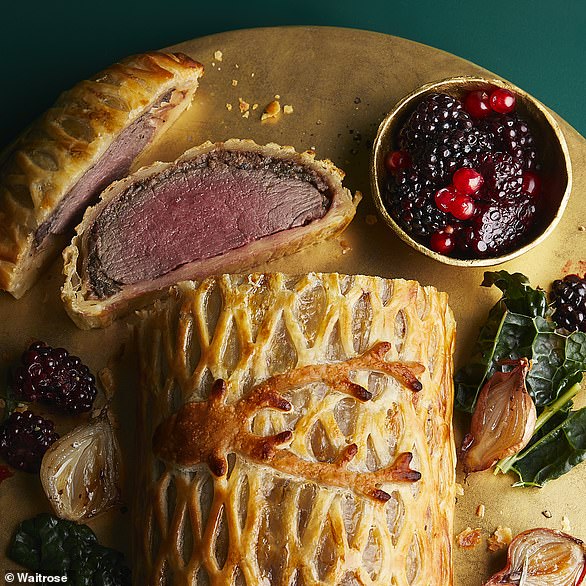 Available in shops across the UK from the end of October, the range also includes jewelled stuffing ballotine, duck parfait with a mushroom centre and breaded vegan baked cheese melts.

The upmarket grocer, who parted ways with Ocado in August, is predicting a trend away from turkey this winter as customers opt for alternatives meats for Christmas dinner.

Last year, demand for venison rocketed on waitrose.com with Waitrose Entertaining orders doubling compared to 2018, while sales of the deer meat as a whole were up more than 60 per cent.

One option in the range is inspired by the rise of slow-cooking and interest in lesser-known cuts of meat, during lockdown.

What’s in the Waitrose Christmas range?

The classic puff pastry Wellington – with a twist. Venison loin is topped with a mushroom duxelle made with porcini mushrooms, brandy and thyme, plus juniper and blackberry to bring out the venison’s unique flavour.

THE BEST OF BOTH: FREE RANGE BRONZE TURKEY CROWN WITH THIGHS, £60 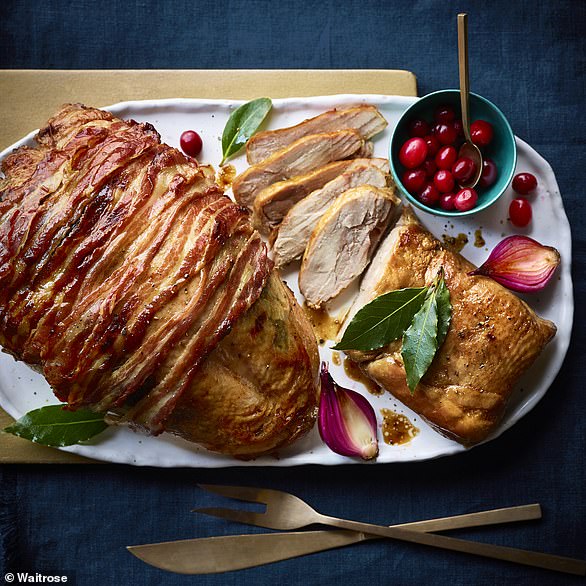 Tender breast meat and slow cooked thighs, together with stuffing and juices that can be used to make a delicious gravy. 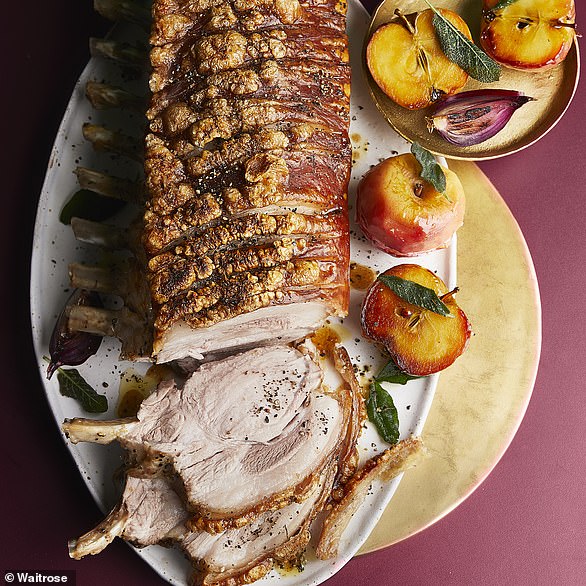 A 10 bone French-trimmed free range pork crackling joint, from pigs sired by pedigree Hampshire boars. The skin is rubbed with black pepper and sea salt to make the crackling extra crispy. The joint makes a stunning centrepiece for a Christmas table. Produced from free range pigs that spend their lives outdoors in woodland, with straw-filled arcs or tents for shelter, foraging the woodland flora and fauna to supplement their diet. 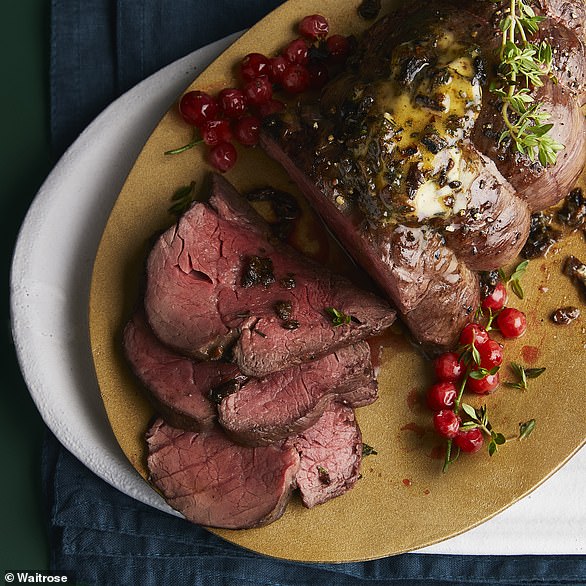 A superbly tender cut of British beef, taken from the thickest part of the fillet, with a rich truffle and porcini butter to melt on top 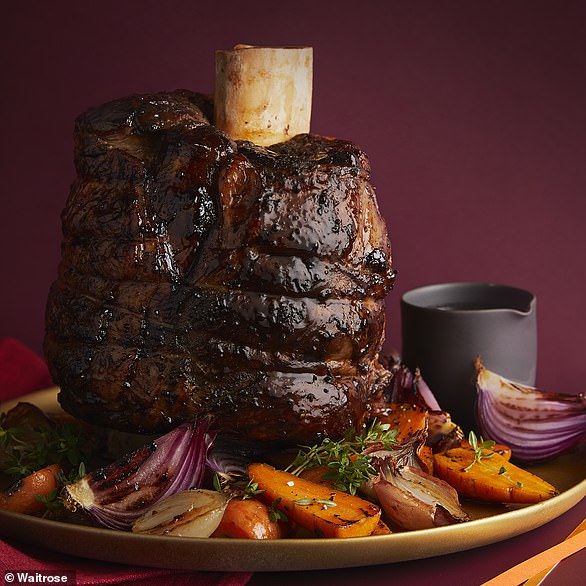 A slow-cooked beef shin that offers great flavour and meltingly tender meat. Simply glaze with the decadent and deeply savoury Merlot and shallot sauce, and stand in the centre of the table for your guests to admire 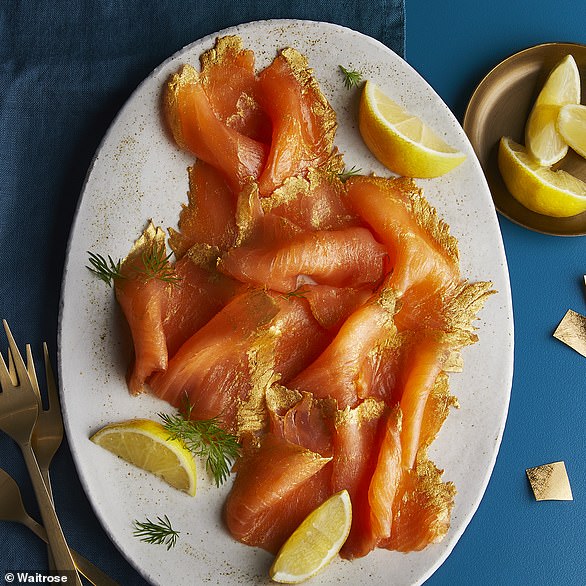 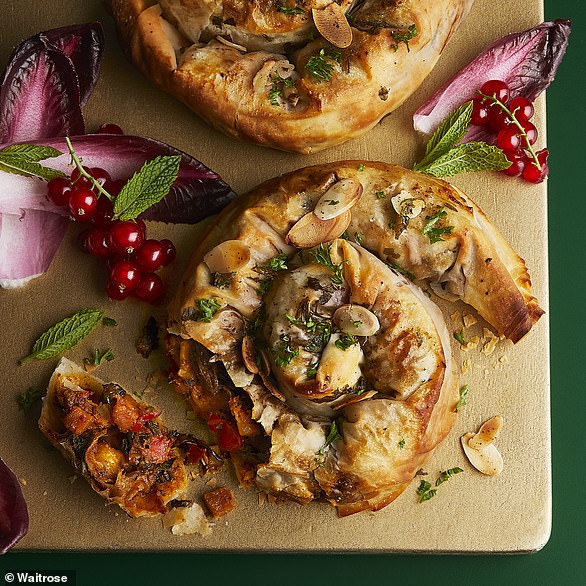 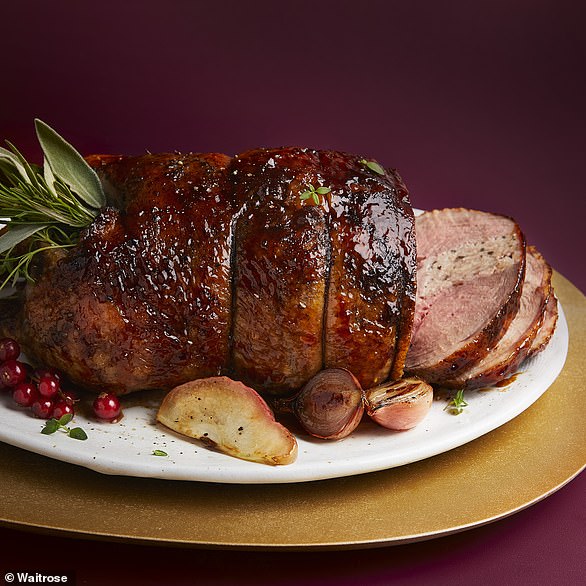 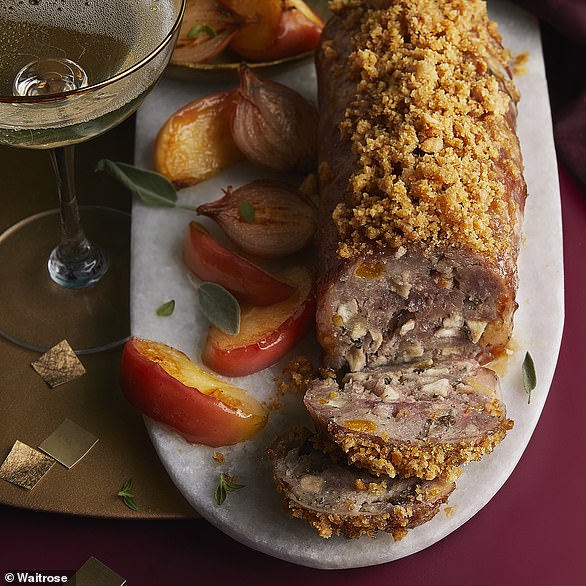 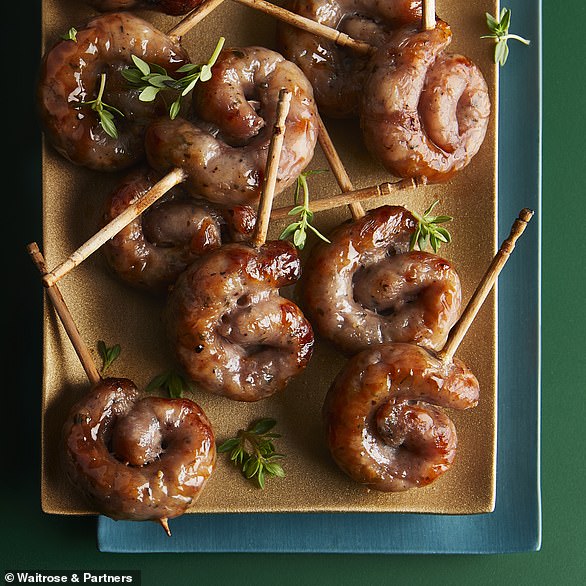 Made with pork sausagemeat, smoked bacon and sweet maple syrup. A mouth-watering mix of savoury and sweet. 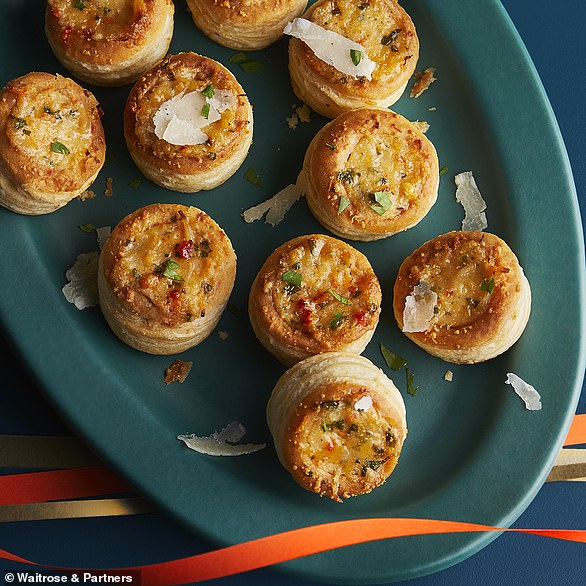 Lobster and king prawns in a creamy white wine sauce laced with Cognac. Roll out the red carpet. 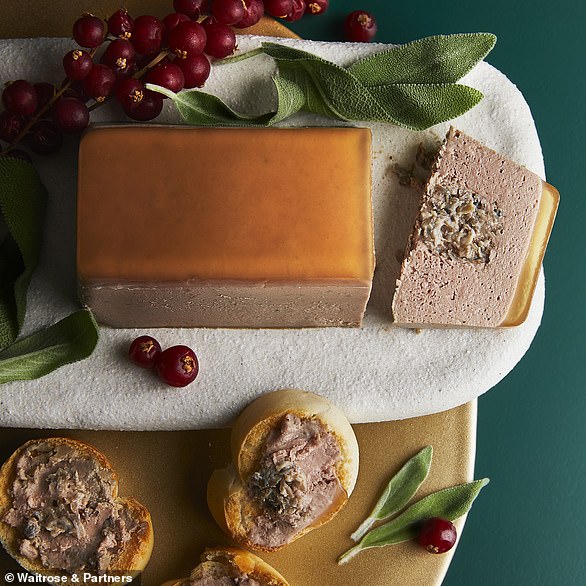 A silky-smooth duck parfait with a hidden centre of oven roasted mushroom and truffles, finished with a sweet Madeira wine glaze. 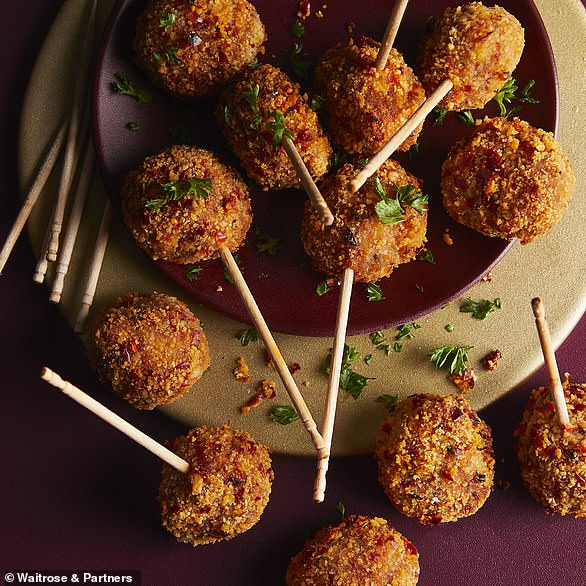 With spicy pork and ‘nduja sausage and red pepper flakes. Bring a little heat to your Christmas kitchen. 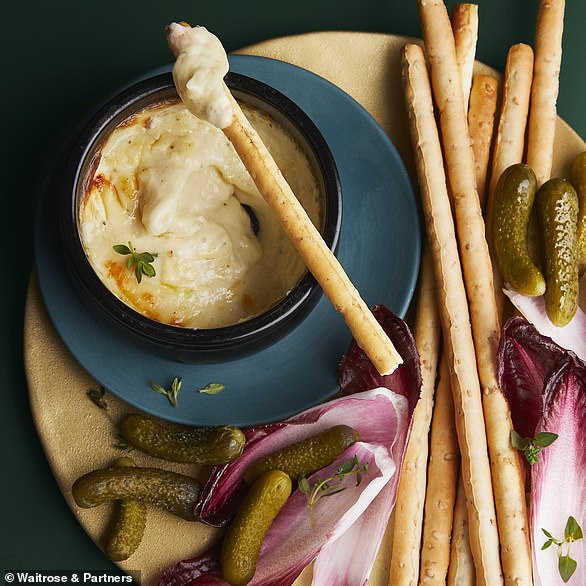 A ready-to-bake blend of cheese, cream and white wine – perfect for dipping. Gather round and share the magic. 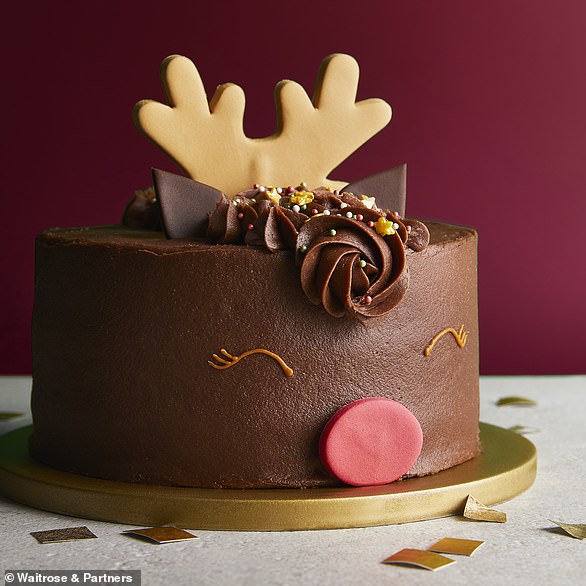 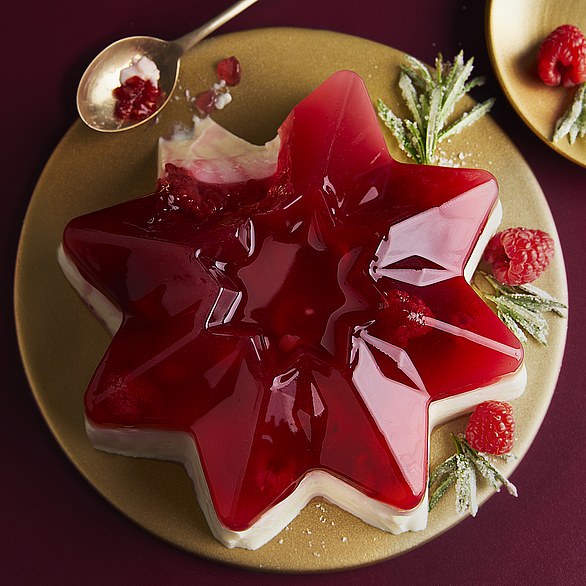 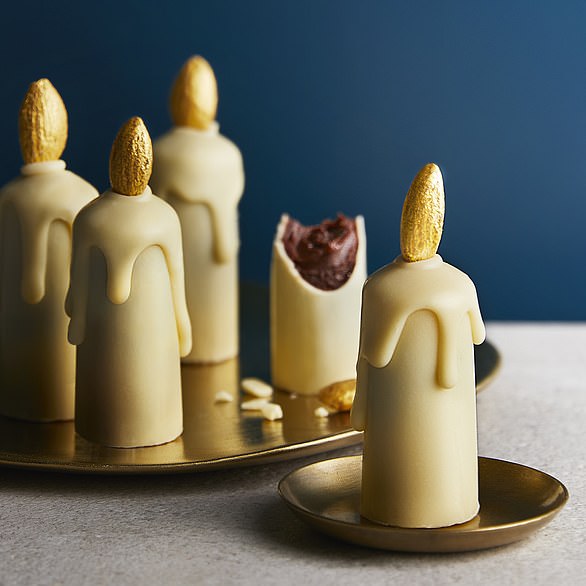 Waitorse say their beef shin is a great option for easy hosting because the slow cooking part (nine hours in all) has already been done.

The classic sauce that accompanies it is a rich reduction of smooth Merlot wine, beef stock and redcurrant jelly to cut through the deep flavours.

The supermarket is also celebrating 10 years of partnership with Heston Blumenthal, and bringing a range of the celebrity chef’s produce to their Christmas offerings – including an Espresso Martini which is made with coffee from his three Michelin star restaurant The Fat Duck.

Heston’s range also includes Night Before Christmas Mince Pies made with a golden carrot and caraway shortcrust pastry, filled with rich carrot and vine fruit mincemeat laced with cream sherry with a special sprinkle of smoked sugar on top. 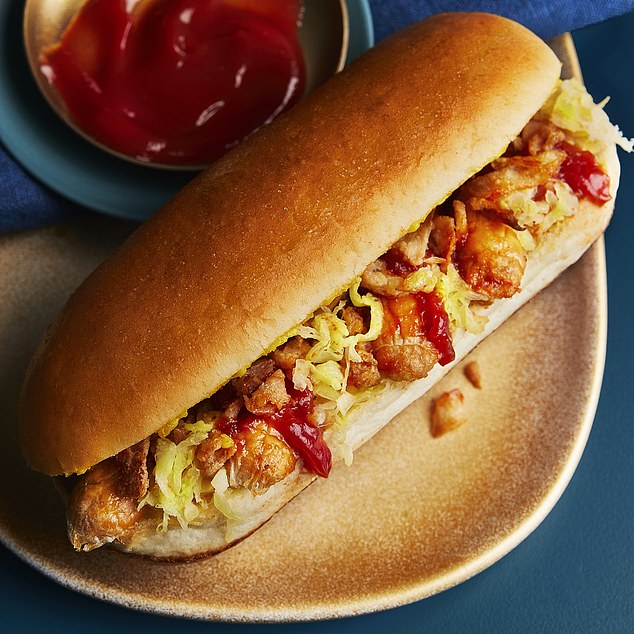 For a special Christmas breakfast, the chef has infused smoked salmon with his Citrus Sherbert Gin for a refreshing twist of the Christmas brunch classic, finished in gold lustre for a really indulgent start to the festivities.

To dazzle diners over Christmas lunch, the Heston from Waitrose range also offers Jewelled Stuffing Ballotine which is inspired by a dish at Blumenthal’s restaurant, The Hind’s Head.

However the Waitrose version will set diners back just £7.

Known for his unusual flavour comibations,  Heston is also offering a Sherry & Balsamic Vinegar Christmas Pudding which features plump Turkish sultanas soaked not just in Ruby Port but aged Balsamic of Modena to bring out all their rich, fruity flavour.

With fresh apple, cider and dark, intense Pedro Ximenez sherry, the pudding has been maturing for a full 12 months for a indulgent, boozy finish to your festive feast. 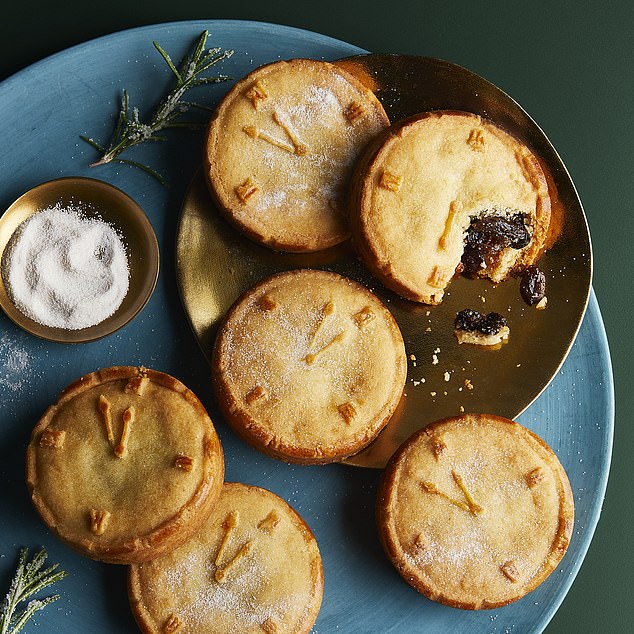 Heston’s favourite!  The Night Before Christmas Mince Pies made with a golden carrot and caraway shortcrust pastry, filled with rich carrot and vine fruit mincemeat laced with cream sherry with a special sprinkle of smoked sugar on top.

The stollen, which is inspired by a traditional historic British recipe and based on one of Dinner by Heston’s signature desserts, also comes in a pack of six Heston from Waitrose Tipsy Stollen Slices, ideal for a suitably seasonal snack.

Or for a taste of the continent, an Italian favourite and classic British pud have been re-imagined with an unexpected twist in the Heston from Waitrose Sherry Trifle Panettone, bringing the best of both into one delightfully delicious bake. Golden Italian panettone is scattered with Amontillado-soaked cherries, filled with custard and sherry syrup and topped with dark chocolate, toasted almonds and fennel comfits.

And to finish the festivities with a sparkle, light up your celebrations with Heston’s Chocolate Bucks Fizz Candles for a fabulous after dinner treat. White chocolate candles hide a secret centre of velvety chocolate ganache, with a citrusy kick and a celebratory splash of marc de Champagne.

Speaking to FEMAIL, Heston said: ‘Christmas is the most magical time of the year and I hope my new additions at Waitrose will bring some unexpected surprises to the festive season.

‘They combine some of the season’s favourites with a special twist and fantastically curious flavours, like my personal favourite, The Night Before Christmas Mince Pies.’